The Small Towable May Look Like Other Trailers, But It Has an Identity All Its Own

Compact and lightweight, teardrop trailers have been a stalwart of the RV industry for years. These tiny towables derive their name from their distinctive shape, which usually features an aerodynamic design that is overly rounded on one end and tapers off to a degree on the other. Over the years, numerous manufacturers have put their spin on this type of travel trailer, sometimes making only slight variations on the vehicle’s profile. But that isn’t the case for the Campinawe Sport Trailer, which departs with tradition in a number of ways.

Unlike other teardrops, the Campinawe isn’t concerned about being as aerodynamic as possible. Instead, the exterior of the camper is a mix of angular corners and shapes, giving it a unique silhouette that is all it’s own. The result is a trailer that looks vaguely like a traditional teardrop, with a dash of modern art thrown in for good measure. 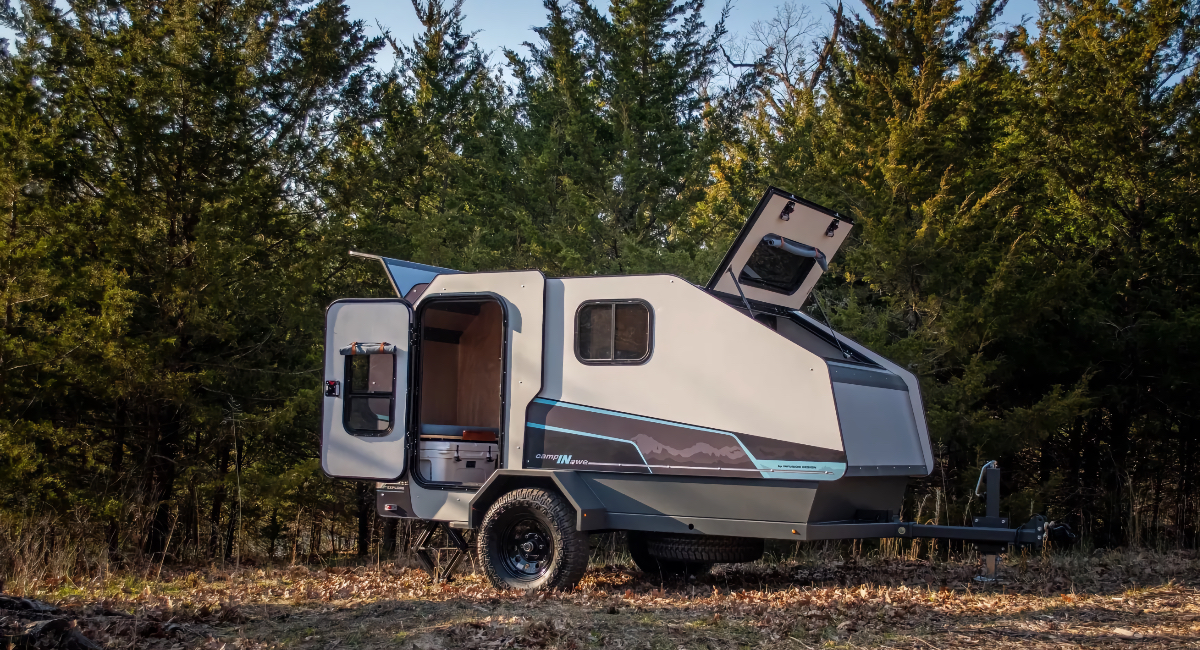 That isn’t to say the Campinawe isn’t without its charms. Its geometric contours give it plenty of character and allow for additional interior space. Inside, the trailer features a queen-size bed, wooden cupboards, and a foldable bench with extra storage underneath. A galley kitchen hides under a hatch at the rear of the vehicle, and a privacy tent serves as the outdoor bathroom, complete with a portable toilet and shower.

The Campinawe utilizes off-the-shelf components to add functionality and versatility. For instance, it comes with a Rhino Rack roof rail and crossbar system that makes it easy to add additional features, including a rooftop tent or kayak racks. The trailer eschews a powered refrigerator in favor of a Yeti cooler and utilizes a 72-Ah battery pack from Renogy to supply onboard power. Optional upgrades include an awning, bike rack, and solar panels.

With a dry weight of just 1,910 pounds, the Campinawe is light enough to be towed by small SUVs and crossovers. It is also just 6.9 feet in height, allowing it to easily slip inside most garages.

Check out the video above for a look inside the Campinawe Sport Trailer. Then, visit the company’s official website for all the specs and details.