Thanks to the use of high-end materials, new technologies, and innovative design, RV manufacturers continue to redefine the ultra-exclusive luxury market segment. But few companies can match the envy-inducing motorhomes produced by Anderson Mobile Estates, a company that builds custom vehicles that are beyond lavish. 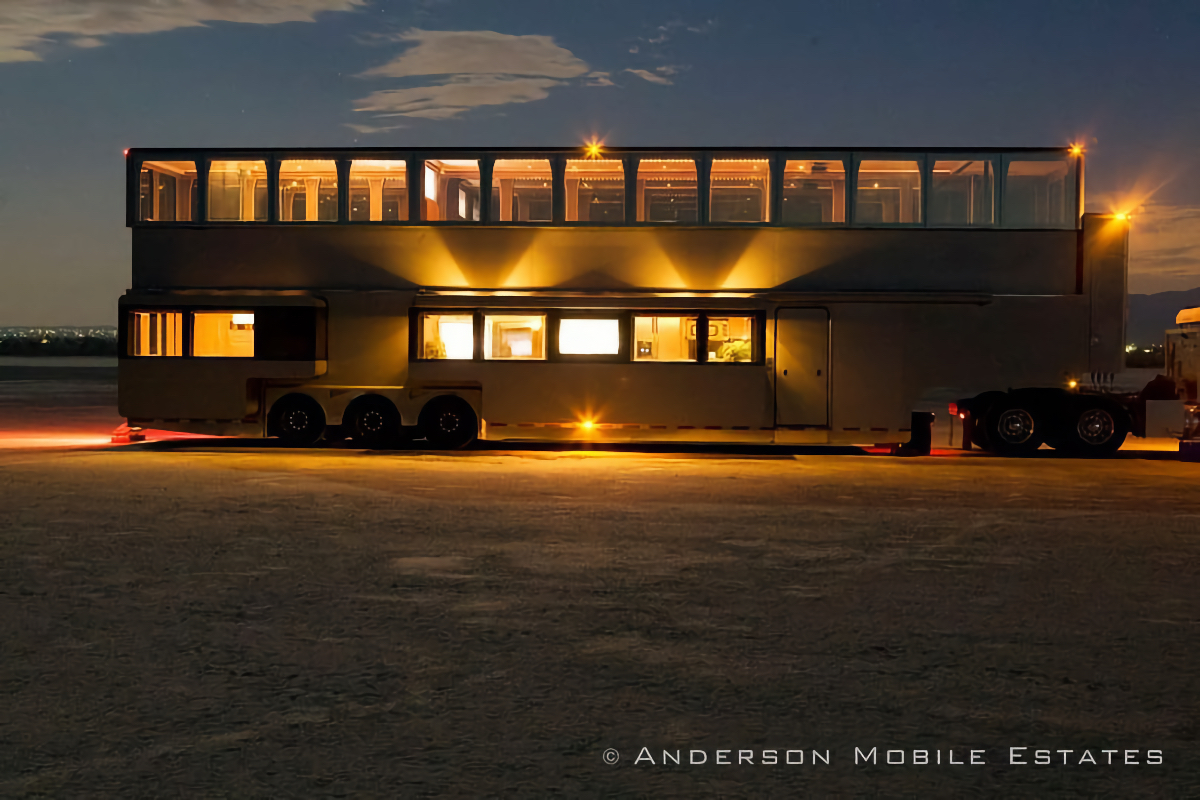 Although Anderson Mobile Estates launched in 2000, the company’s legacy goes back much further than that. In 1987, owner and founder Ron Anderson started Star Trax Celebrity Coaches, which built Class A motorhomes for movie stars, singers, athletes, and other celebrities. Past clients include Will Smith, Brad Pitt, Jennifer Lopez, Adam Sandler, and even former President Bill Clinton.

Anderson sold Star Trax in 1999 and spent the next year sailing around the globe with his family. While at sea, he began sketching out plans for building an innovative new RV built on a tractor-trailer platform. The interior of the motorhome took cues from luxury yachts, squeezing plenty of upscale amenities into a small space. But the most impressive idea was to build a motorized lift system into the trailer that transforms it into a two-story living space while parked. The second story would expand while standing still and collapse down to a single level while in transit.

When he returned home, Anderson went to work on his new idea, which required some serious engineering to make functional. The concept designs called for eight pistons to raise and lower the upper deck, but the frame of the RV had to allow the second floor to move up and down without damaging the vehicle. It looked like a simple concept on paper, but it required $4 million of research and development to get everything right. 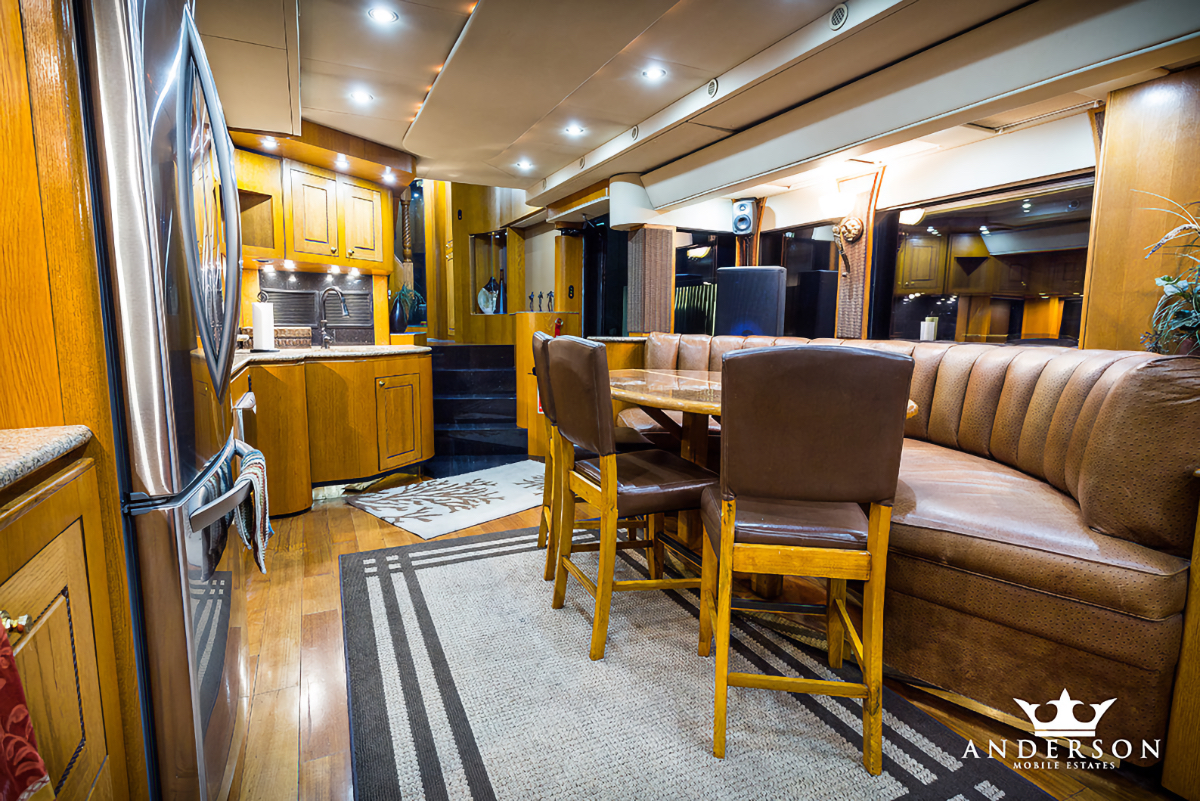 Eventually, Anderson and his team of engineers were able to work out the challenges and build a prototype. That model stretches 75 feet in length, weighs more than 40 tons, and rides on 22 wheels. And in addition to its pop-up second-floor living area, it includes several first-floor slide-outs that, when deployed, expand the living space to more than 1200-square feet. In comparison, most Class A RVs have less than 350-square feet of space.

When the prototype RV was eventually sold to Will Smith for a whopping $1.8 million, its interior space resembled an upscale apartment with plenty of features and amenities. These include granite countertops, wood, and granite flooring, custom Italian cherrywood cabinetry, LED lighting, and 14 TVs. The first floor has two full-size bathrooms, a dinette, and a massive kitchen with an induction stove, microwave, and residential-size refrigerator. Upstairs, the trailer has a private bedroom with a king-size bed and an entertainment area with room for up to 30 people.

After getting the prototype out the door, Anderson Mobile Estates began producing other models, each with its own unique floor plans and features. The company builds its vehicles to meet each client’s specific needs, creating a motorhome suitable for work and play. The newest versions of the luxury travel trailers include technology to keep owners connected while on the road, including satellite internet service and Wi-Fi connectivity throughout the vehicle. Some of the campers even come with spacious offices that facilitate working from anywhere. 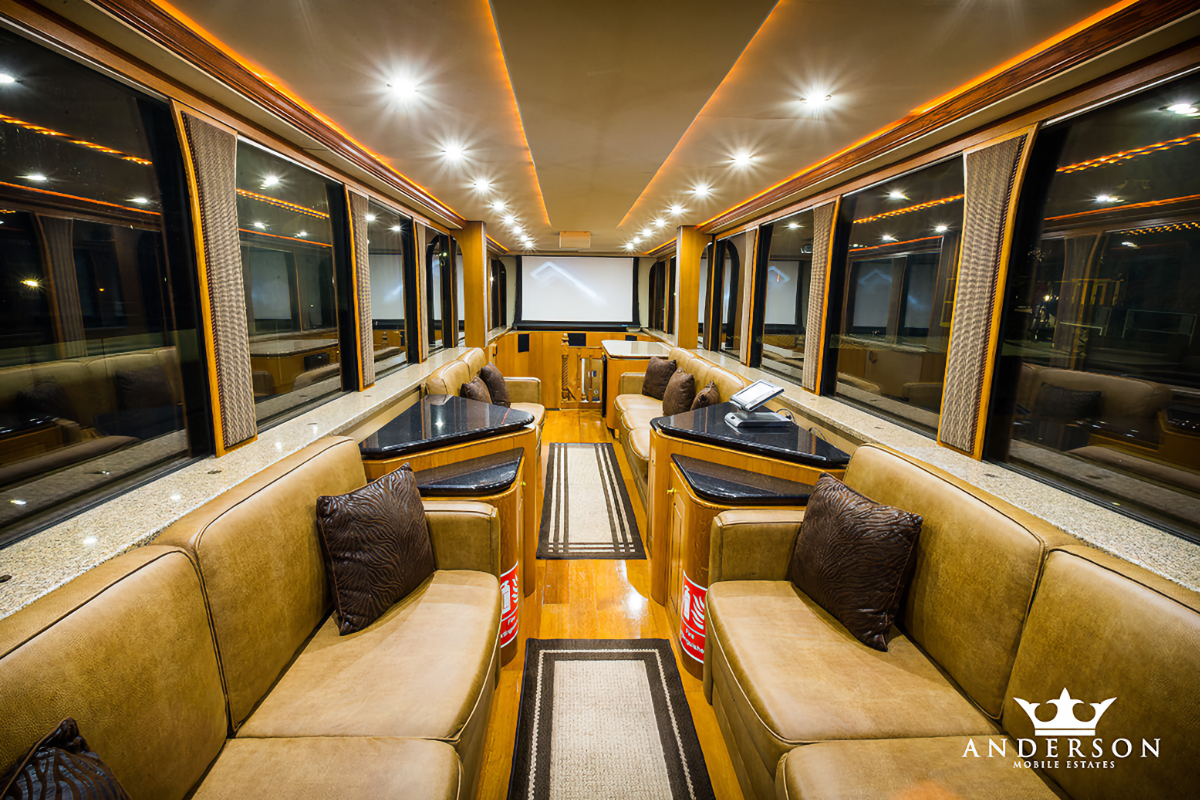 Other onboard technologies include automatic doors, biometric security systems, and an integrated sound system. The trailers come with smarthome technology like smart locks, thermostats, lighting, and window shades. These devices can all be controlled via a smartphone or a touchscreen command center.

Anderson Mobile Estates builds each trailer to the exact specifications of the client. The process is meticulous, with the design team working closely with the customer to make an RV that exceeds expectations. The company offers a wide variety of exotic woods, leathers, hard surfaces, and technologies to create an upscale luxury living space is sometimes referred to as a “mansion on wheels.”

To preserve the exclusivity of its RVs, Anderson limits the number of trailers that it produces on an annual basis. Because of this, potential clients are encouraged to get their names on the waiting list as early as possible. Once the company fills the allotted build slots, customers may have to wait until the next calendar year to claim a reservation, potentially delaying delivery for months. Then again, if you have the money for one of these custom-built vehicles, you probably won’t mind waiting to get your new motorhome.

For more information—including many photos of past builds—check out the Anderson Mobile Estates website. Visitors will find information on the company’s corporate builds and rental options as well.