Everything You Wanted to Know About Solar Cookers for Camping

Harness the Power of the Sun to Cook Your Next Meal

Solar panels have been a welcome addition to the RV space, providing an additional source of energy while camping off the grid. But recharging battery packs and mobile devices isn’t the only way to harness the power of the sun. An increasing number of campers are discovering the art of solar cooking, which can be a game-changer when it comes to meal prep. 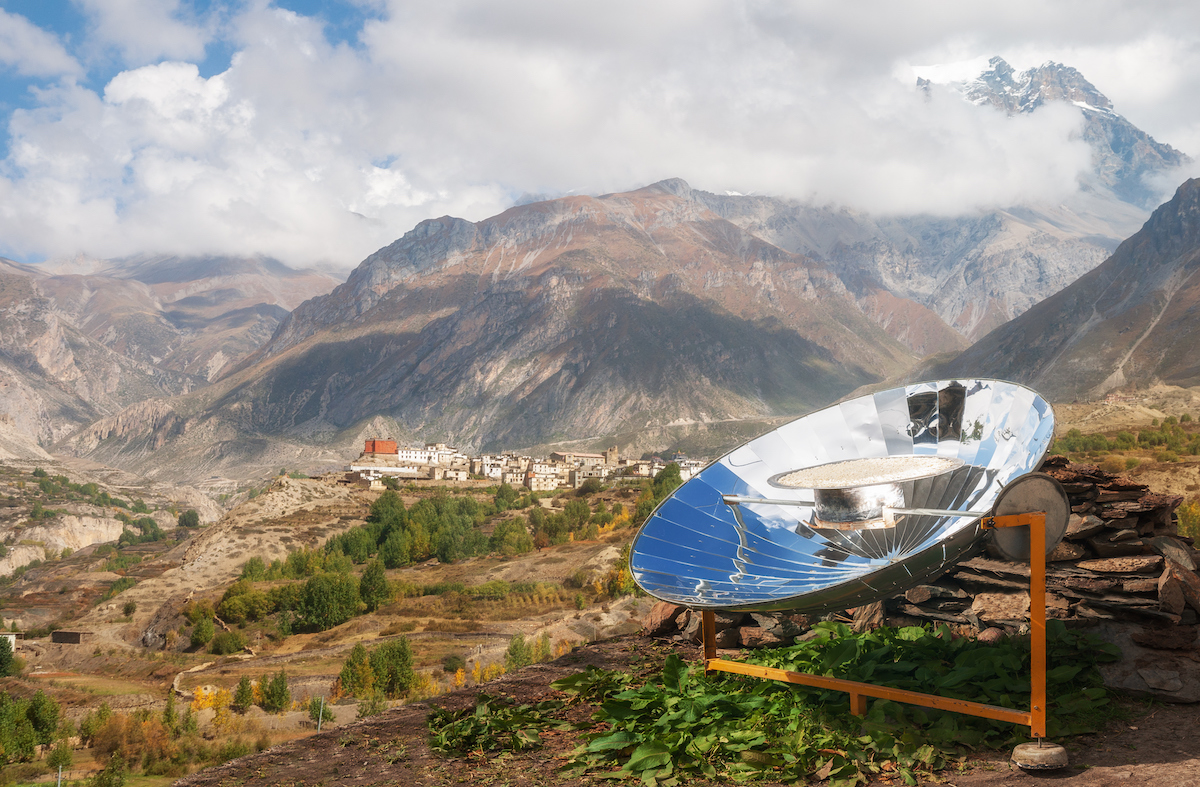 What is a Solar Cooker?

A solar cooker is an apparatus that collects and concentrates the sun’s heat to cook a meal. These devices come in a variety of forms but typically use reflective surfaces, glass, and other heat-absorbing materials to generate temperatures high enough to cook just about any type of food.

Solar cookers have been around for decades and come in all shapes and sizes. Many are do-it-yourself projects designed and built by industrious individuals, although commercial models have become more readily available in recent years. The DIY options are less expensive, but the commercial versions heat up quicker and are more efficient and reliable. 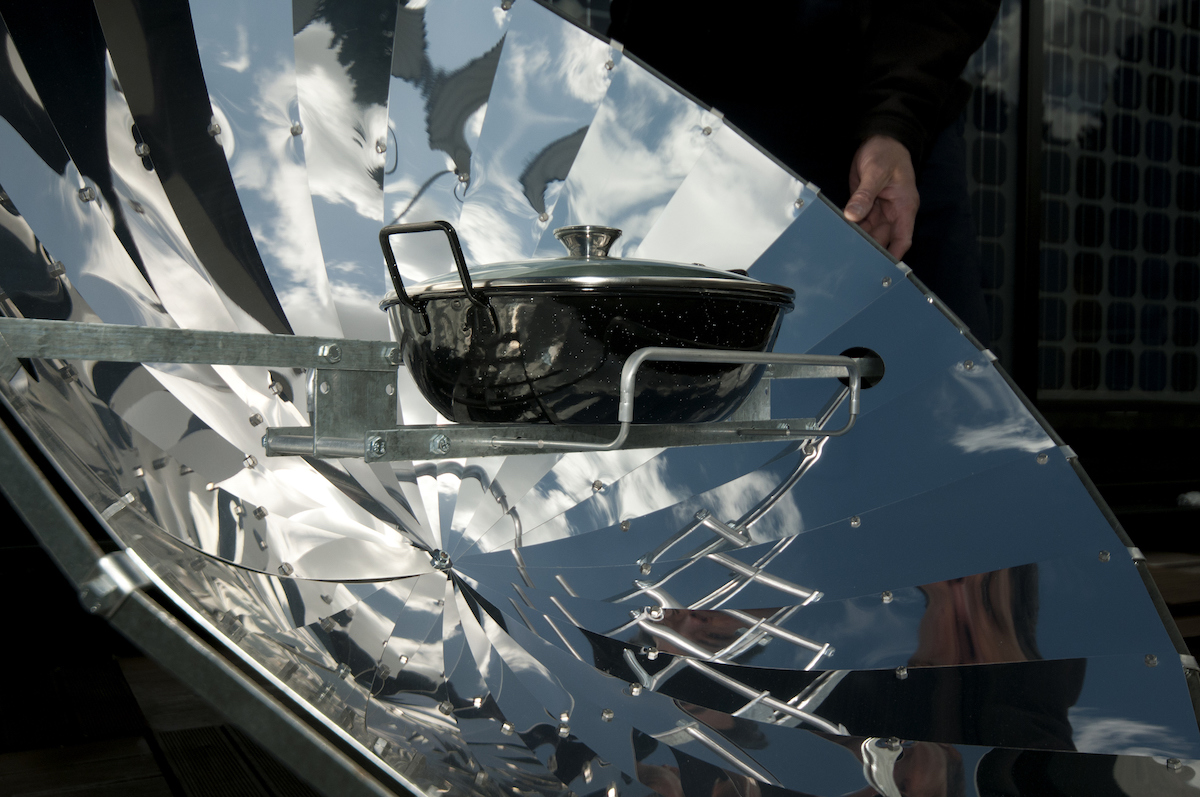 Why Use a Solar Cooker?

Solar cookers have become popular options for use at campsites for several reasons. First and foremost, they can cook a hot meal without requiring a source of power, propane, or fuel of any kind. A solar oven doesn’t generate any type of emissions either, making them good for the environment. And because solar energy is often freely available, these devices can be used just about anywhere outdoors.

Even RVers who already have a well-appointed kitchen in their camper can benefit from using a solar cooker. Because they need to be outside to operate, a solar oven won’t heat up the interior of the vehicle, conserving power and propane in the process.

However, there are a few things to keep in mind when using a solar cooker. They take longer to cook a meal than a traditional stove, and they are best used when the sun is at its highest and hottest—typically between 10:00 AM and 4:00 PM. They also require a bit more patience and planning, as you’ll need to get your meal prepared sooner so that it has plenty of time to cook. 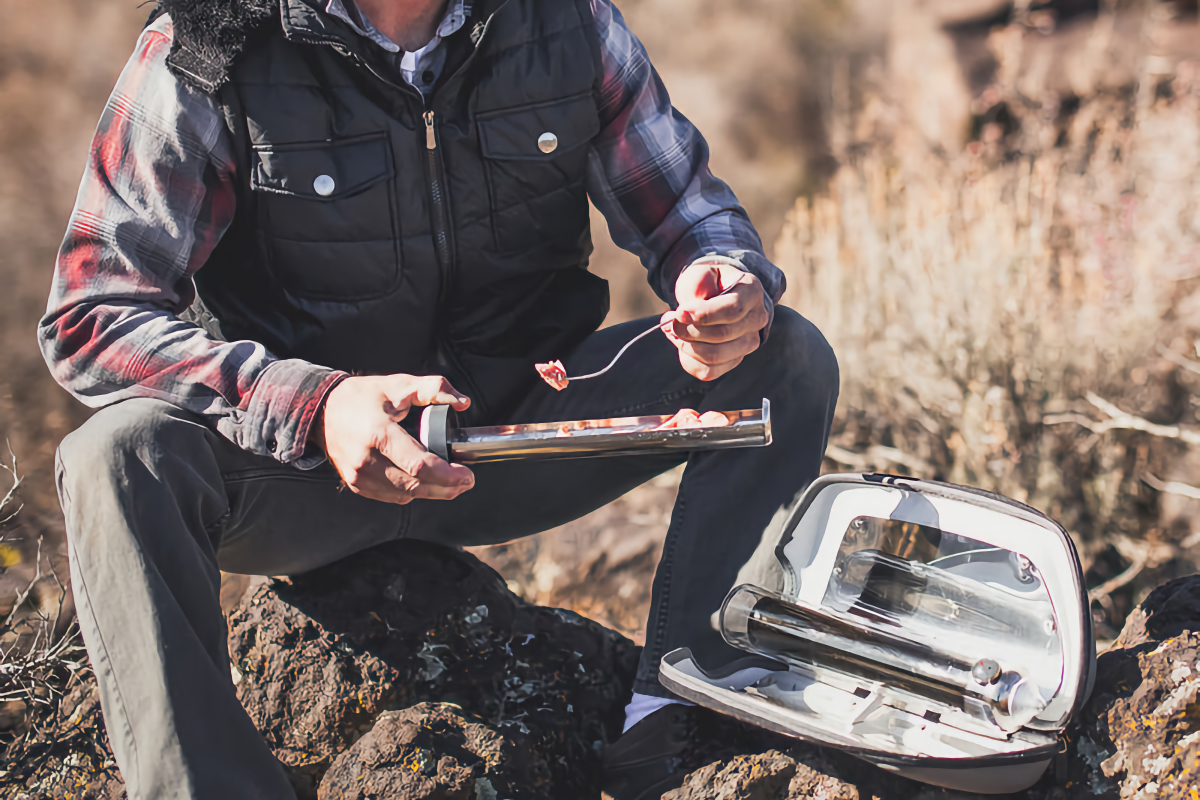 How Long Does it Take to Cook a Meal?

There are a number of variables that impact how long it takes to cook a meal in a solar cooker. Under optimal conditions, expect 2-4 hours of cooking time depending on the type of food being prepared. Items like rice, eggs, and green vegetables are ready reasonably quickly, while meat and baked goods tend to take longer.

Other things that can affect cooking times include cloud cover, weather conditions, and the time of day. Most solar cookers are less efficient when used outside of the 10:00 AM to 4:00 PM window and obviously don’t work at all after sunset. Fog and rain can slow down or halt the cooking process, although frigid temperatures don’t have much of an impact.

Commercially manufactured solar cookers are more efficient than homemade models and can generate more heat. As a result, they tend to cook food faster too. Some even rival the ovens found in your kitchens. 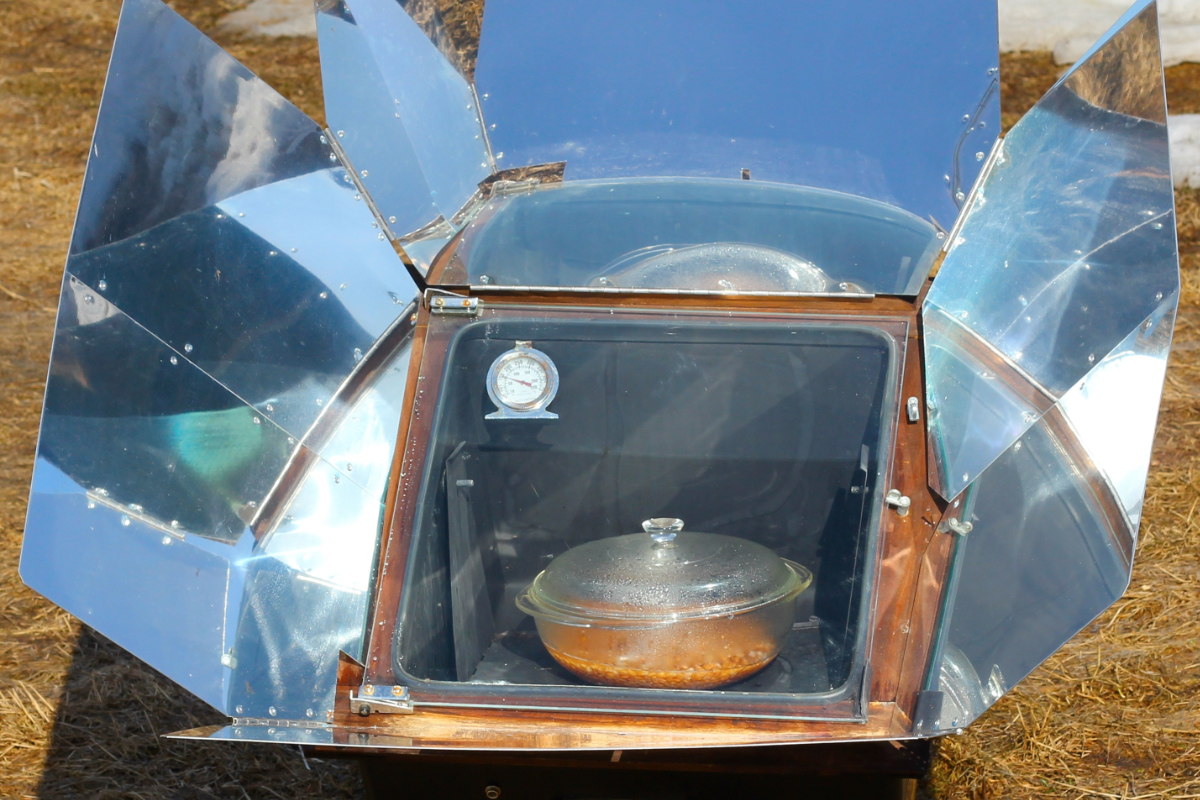 What Foods Can I Cook with a Solar Cooker?

Just about any kind of food can be prepared using a solar cooker. Staples like meat and vegetables are easy to cook, as are fruits, eggs, and fish. But a solar oven can also be used to bake bread, cakes, soufflés, and various other items. Boiling a pot of water allows campground chefs to make pasta, rice, and beans or cook soups and stews. It is even possible to bake cookies and brownies.

Basically, if you can cook something using a traditional stove or oven, you can probably make it with a solar cooker. 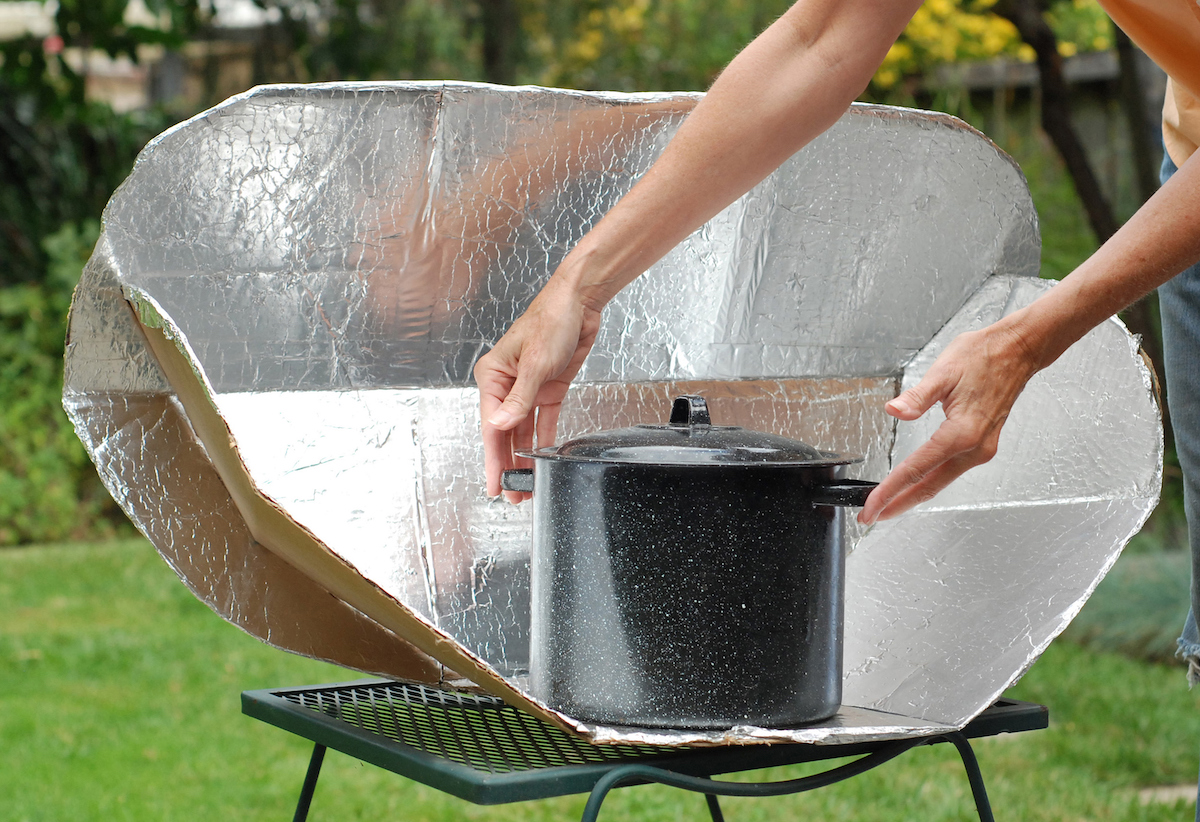 How Do I Make My Own Solar Cooker?

There are numerous websites and videos online that offer instructions on how to build your own solar cooker. You’ll find dozens of options to choose from with a surprising number of variations in design. Some are quick and easy to assemble, while others require time, tools, and specific materials.

Common materials used in making a DIY solar oven include cardboard boxes, aluminum foil, duct tape, black construction paper, and saran wrap. In some cases, packing foam, newspaper, or fiberglass is used as a form of insulation as well. Adding a thermometer to the mix can make it easier to monitor the temperature inside the solar cooker.

Most homemade models also recommend using a black pot or skillet for cooking your meals. When the sun’s rays are focused on the dark-colored metal, a black pan warms up quickly and retains heat longer, which helps the food to cook more evenly. 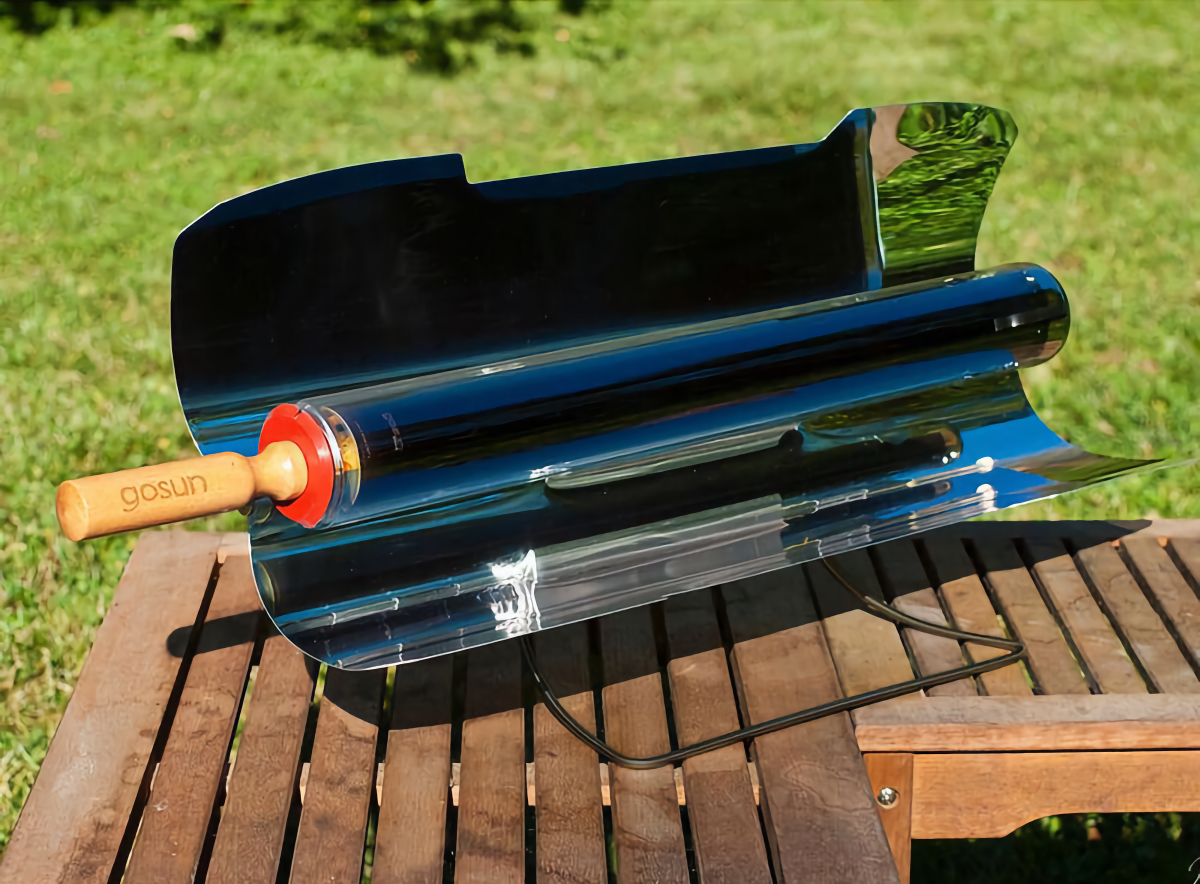 What are the Best Commercial Solar Cookers?

If you’d prefer to buy a high-quality solar cooker rather than make one yourself, there are a number of options to choose from. These ovens cost more than the DIY models, but they are also built sturdier and can cook faster.

Here are a few options that work well at the campground: 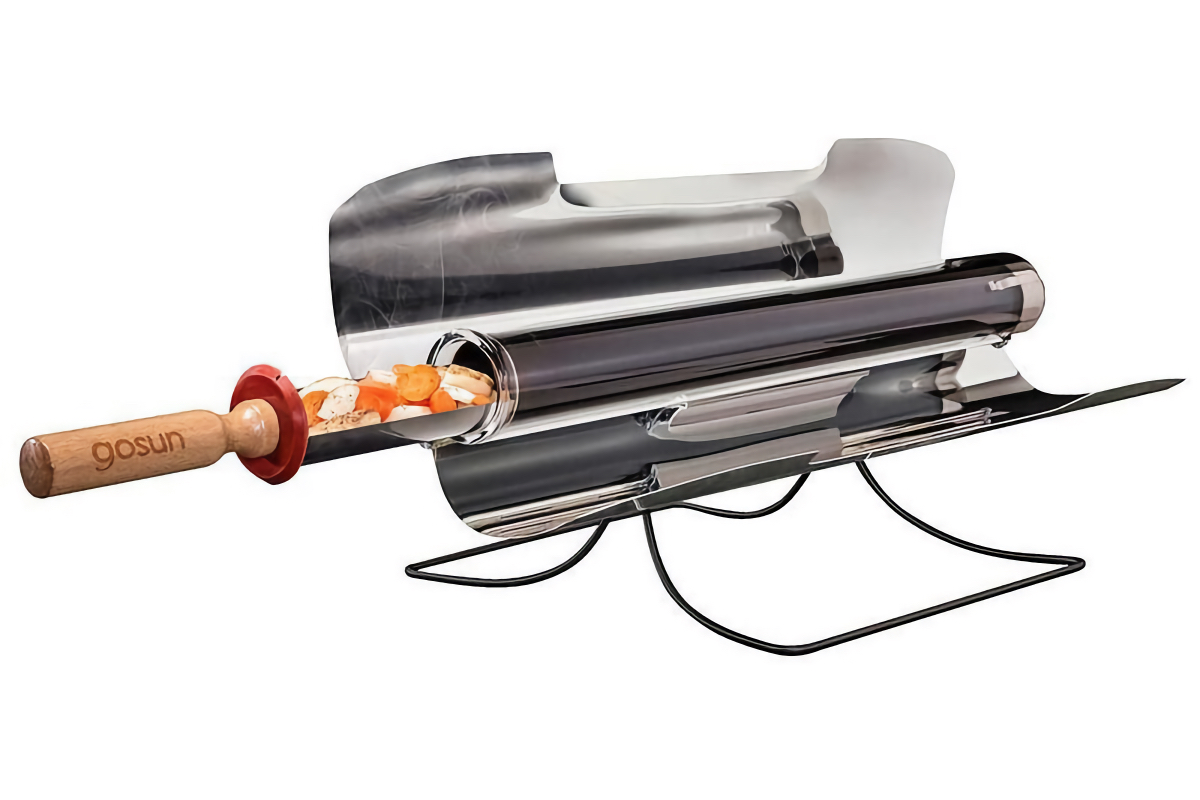 A lightweight and affordable solar cooker, the GoSun Sport can generate temperatures as high as 550ºF when placed in direct sunlight. In optimal conditions, that’s enough to cook a meal in under 20 minutes. And when you’re ready to hit the road, the entire unit folds up into an easy-to-carry bundle. 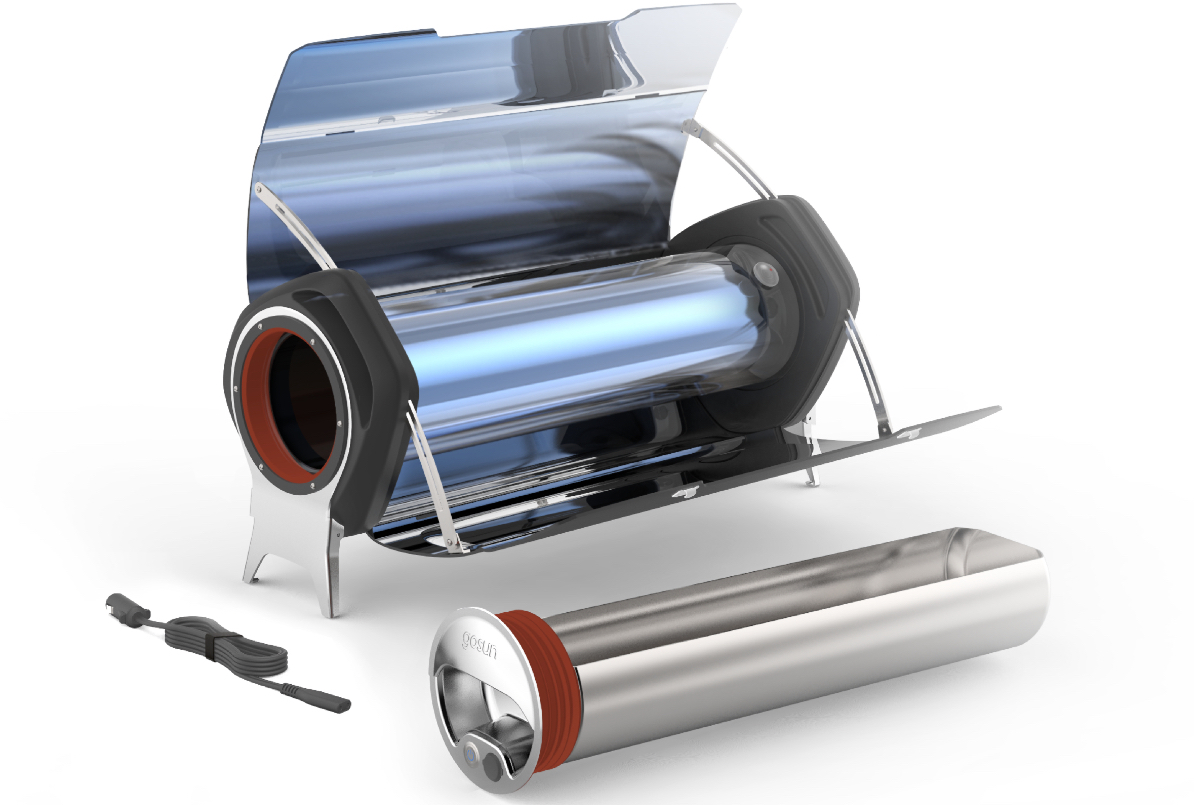 Larger and heavier than the GoSun Sport, the GoSun Fusion offers the same level of performance but with a larger cooking chamber. This model can also be powered by a 12-volt outlet, allowing it to cook a meal even when the sun isn’t shining. 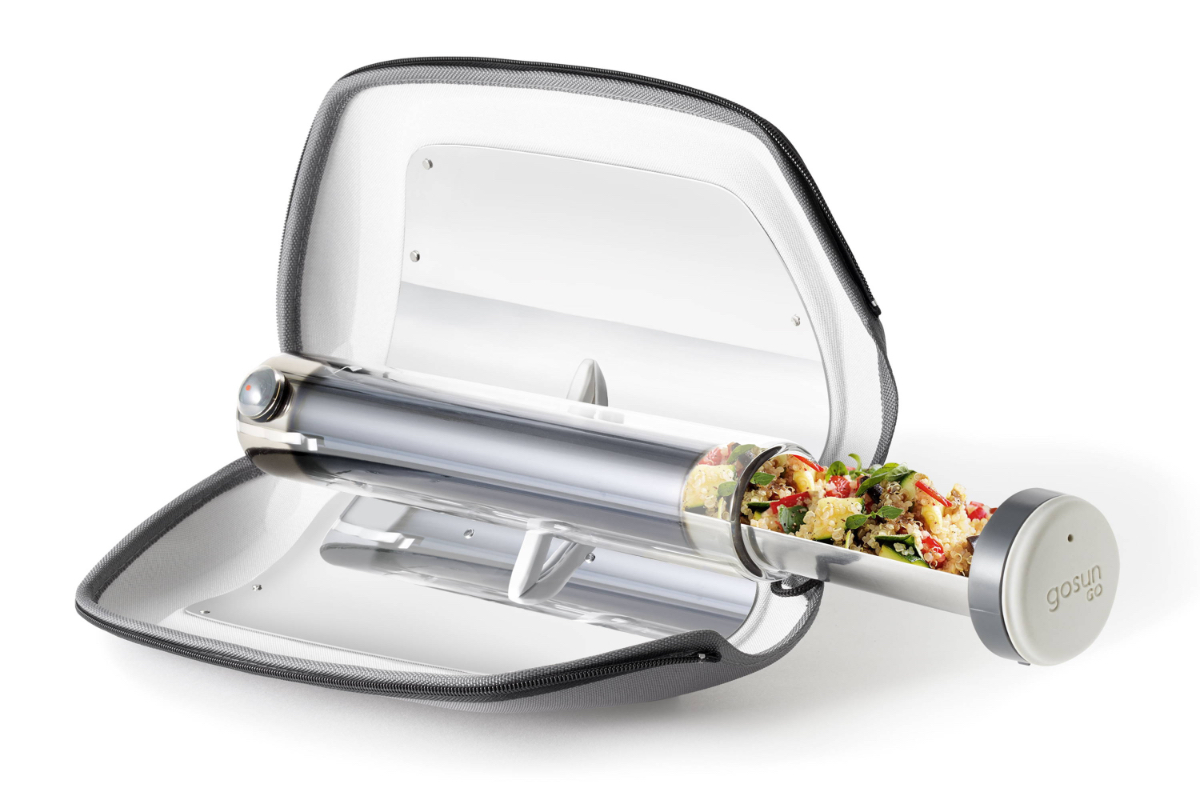 A smaller, more portable version of the GoSun Sport, the GoSun Go is perfect for just one person. This model weighs 3.9 pounds, making it easy to take with you anywhere you go. It is competitively priced, too, allowing it to compete directly with gas-burning camp stoves. 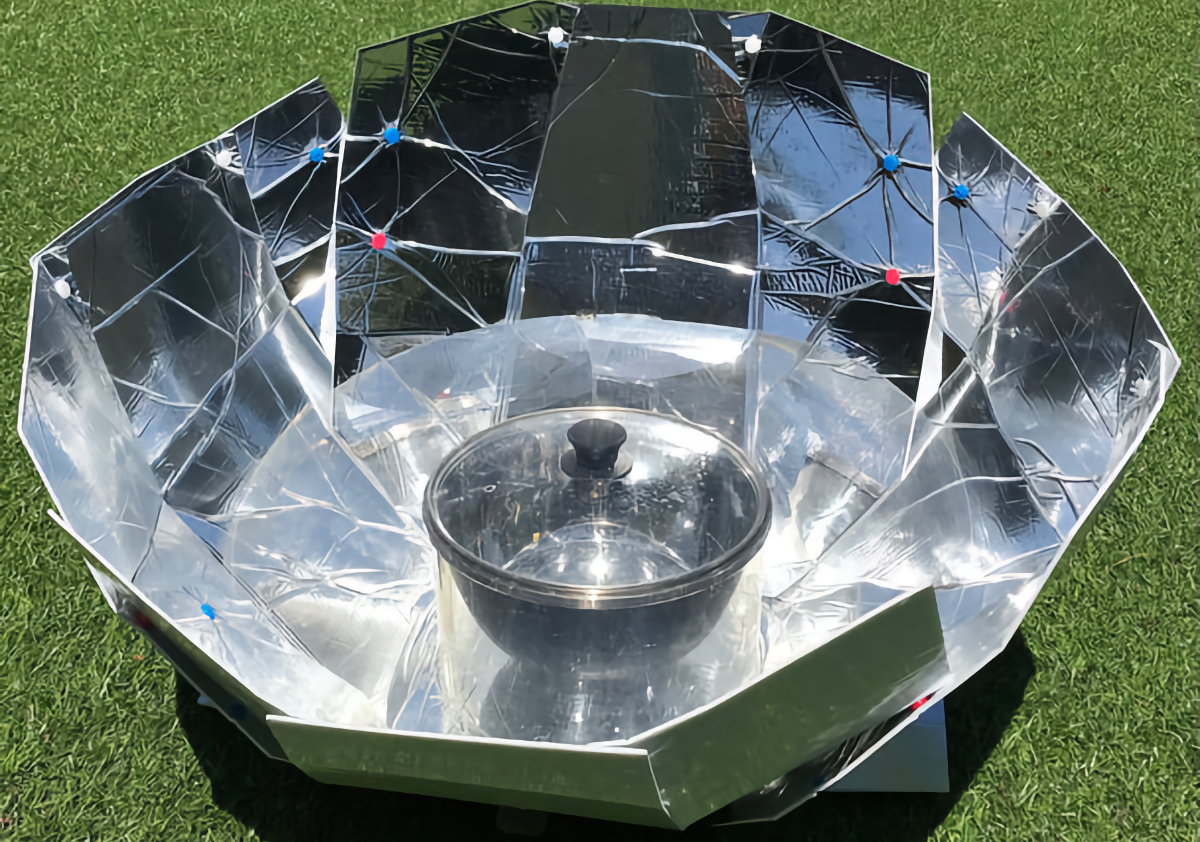 This model uses an adjustable reflective dome to directly focus the sun’s rays onto an included Dutch oven. It can generate intense heat and cook a meal even in cold weather. The Haines 2 is incredibly simple to use and can create enough heat to cook a meal in half the time of a DIY model. 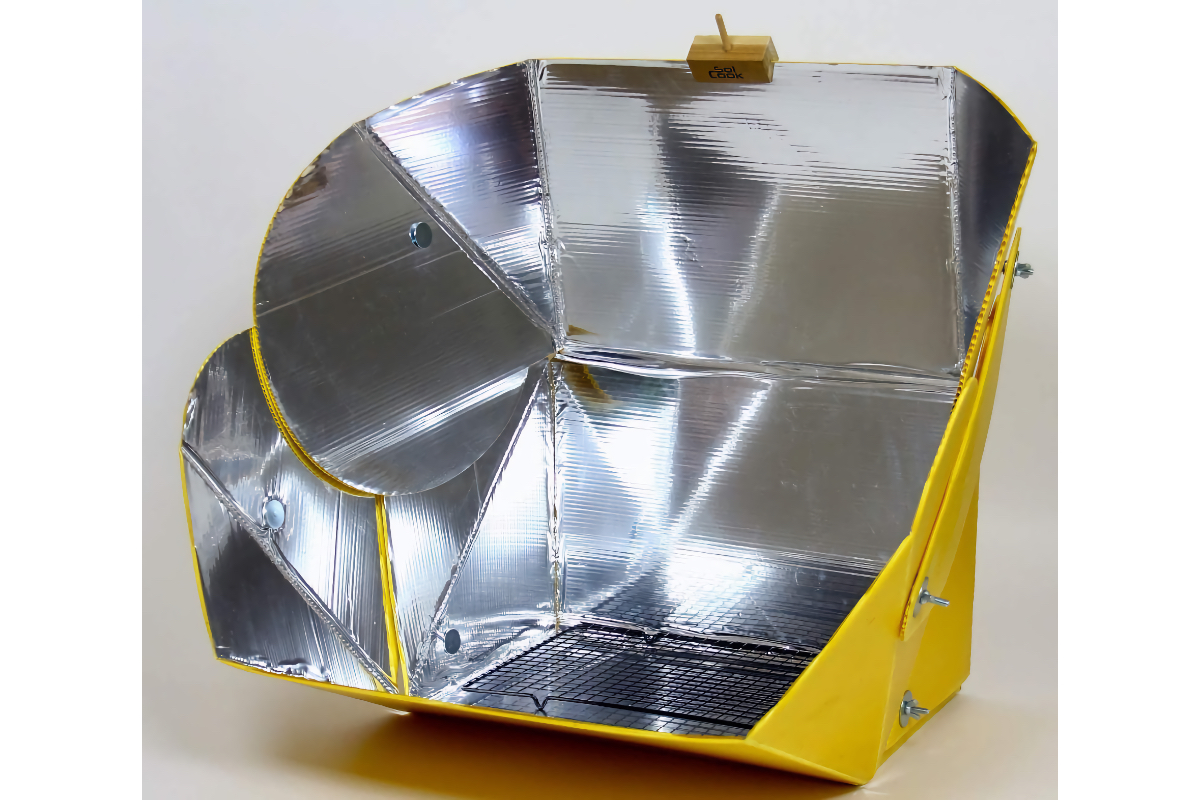 The All Season Solar Cooker Camper resembles a DIY model in many ways but comes with the benefits of a commercial oven. The unit can cook quickly and efficiently and folds into a small, easy-to-carry box when not in use. This model’s attractive price point also allows it to straddle a line between homemade and commercially manufactured options.

There are plenty of other options available in various sizes, shapes, and price points. 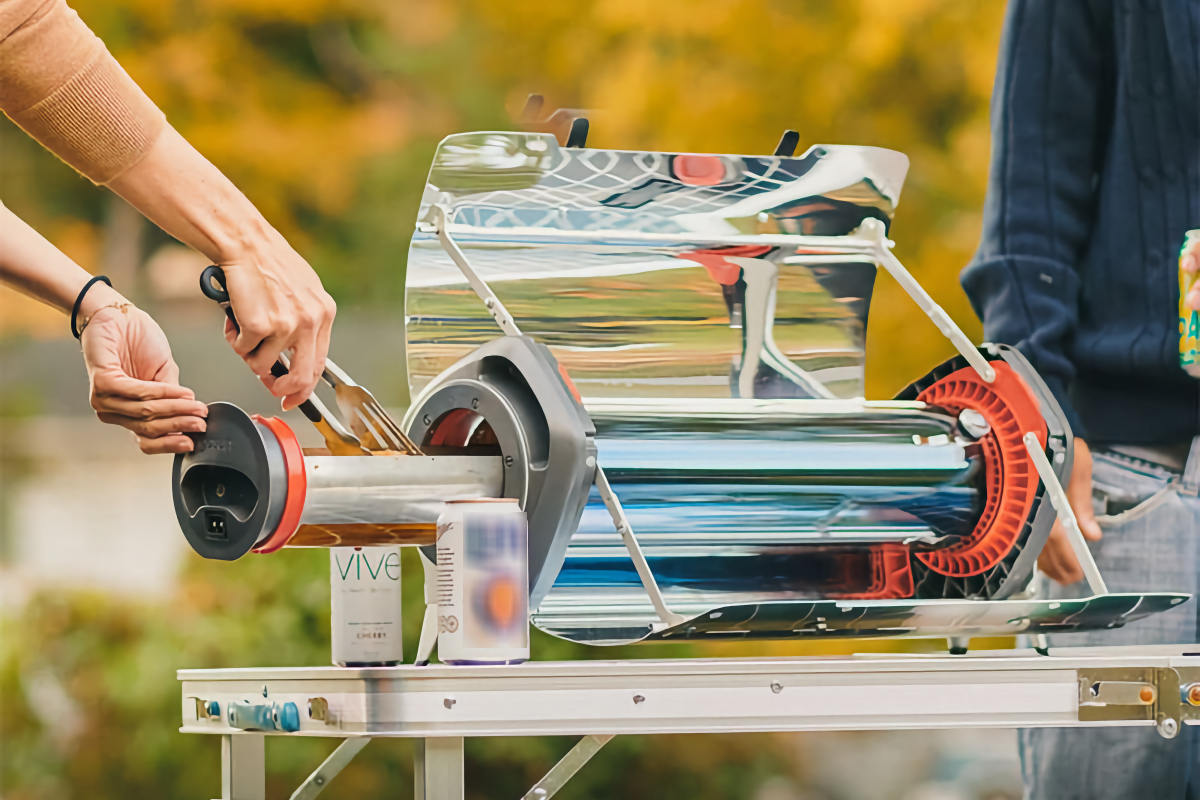 Tips for Using a Solar Cooker

Solar ovens are a fun way to enjoy a great meal no matter where you are camping. Here are a few tips to help you get the most from one of these devices.

Turn Your Solar Cooker to Follow the Sun: For maximum efficiency, turn your solar cooker so that it is always directly facing the sun as it moves across the sky. The unit will continue to cook your meal even if you don’t adjust the direction it is facing, but doing so will speed up the process.

Use the Weather App on Your Phone: The last thing you want is cloud cover to move in while your food is partially cooked. If you have internet service at the campsite, check the weather radar to ensure you have clear skies ahead.

Set a Timer: Just like when you’re cooking at home, it is a good idea to set a timer to remind you to check on the progress of your meal. Because the solar cooking process is fairly automated and straightforward, it can be easy to forget about it on occasion. By setting a timer, you just might avoid a food disaster.

Choose the Right Cookware: As noted, black pans and skillets are the best choices for solar cookers. But those pans can be made from various materials, including metal, cast iron, and glass. You can even use a canning jar in a pinch.

Keep the Lid On: Having a matching lid for your pot can help seal in the heat, but resist opening it up to stir the food inside. If heat escapes, it will prolong the cooking process. You can pop the lid to vent moisture, however.

Clean the Reflective Surfaces: For optimal performance, keep all of your solar cooker’s reflective surfaces clean. This will allow the oven to maintain peak efficiency, which speeds up cooking times.

Preheat the Oven: Set up your solar cooker an hour or two before you’re ready to start cooking. Just like your oven at home, this will give it time to preheat so that when you put your food in, it starts cooking immediately. And since a solar cooker doesn’t require any type of fuel or electricity, you’re not wasting resources.

With a bit of practice and experience, a solar cooker can be a great way to make a meal at the campsite. Don’t be afraid to experiment and try different styles of cooking and foods. Most of all, have some fun.