Fast, Portable, and Efficient, the FireDisc is a Great Replacement for the Traditional Grill

For aspiring camp chefs looking to take their talents to the next level, the FireDisc portable cooker offers some intriguing possibilities. Less of a grill, and more of a griddle, this product heats up quickly, is very efficient to use, and is highly portable. However, it does come with a bit of a learning curve, but those who can master its quirks can create elevated campground meals that will wow friends and family.

For those not already familiar with the FireDisc, it is a portable propane cooker with a unique design. The unit comes with a stand that consists of two sturdy individual metal parts that, when connected, create a four-legged base that maintains its footing exceptionally well on just about any surface. A propane regulator that supports tanks ranging from 16 ounces up to 20 pounds locks into place on the stand. When ignited, it provides a steady flame that can be turned up or down using a built-in dial.

The FireDisc doesn’t come with a grill of any kind but instead ships with a 22″ carbon steel bowl. This heavy-duty cooking surface can hold up to five gallons of food and has three heating zones to accommodate meat, vegetables, or just about anything else you want to cook. Large, heat-resistant rubber-coated handles make it easy to get in place on the metal stand or move about, even when it is hot.

It only takes a few minutes to assemble the FireDisc, including attaching a propane tank. Everything snaps together surprisingly well, and the disc itself rests on top of the stand without requiring any special attachments. After the meal is complete, the unit collapses down equally as quickly and takes up very little room in a garage, trunk, or RV storage compartment.

This collapsible design makes the FireDisc highly portable, which is ideal for use at backyard barbecues and while camping or tailgating. That said, when the unit is fully assembled, it can be somewhat bulky, weighing up to 60 pounds depending on the specific model. None of the individual components feel especially heavy on their own, but together they can be relatively ponderous. Fortunately, this is rarely a problem due to the ease of setup and breakdown. 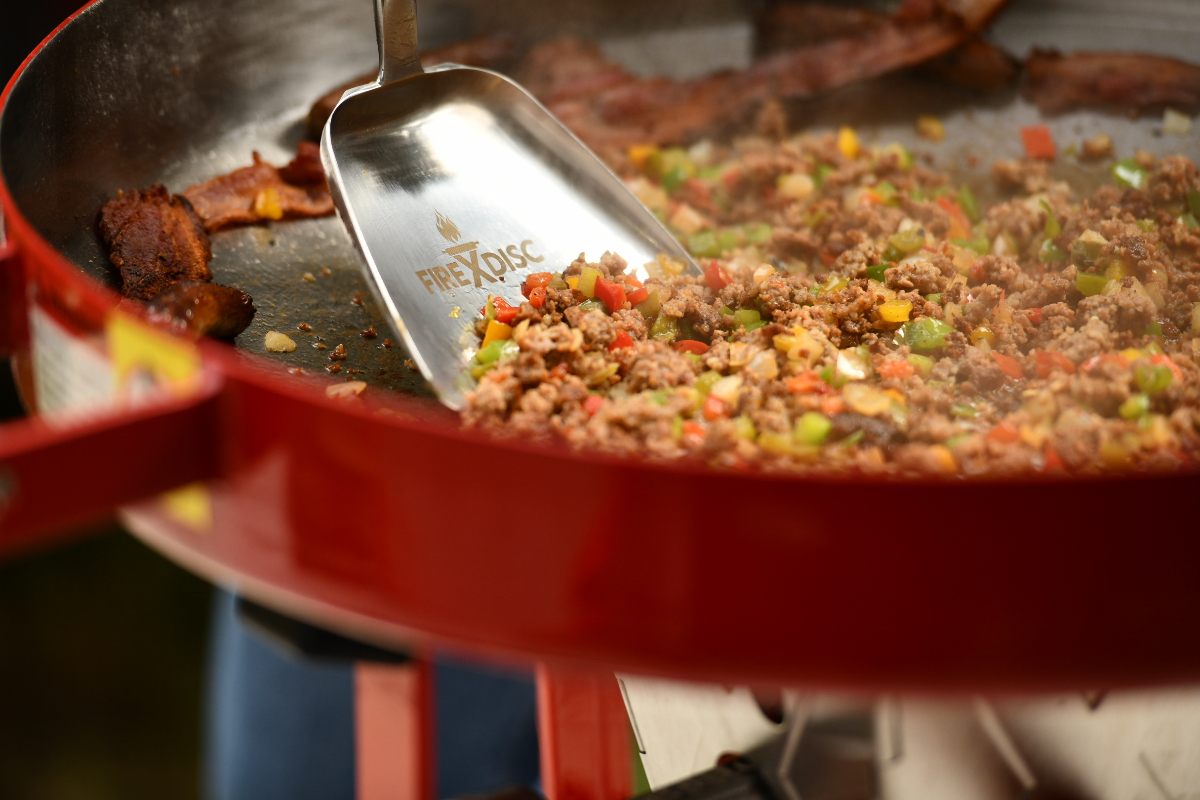 Once the FireDisc is assembled and connected to a propane tank, it is ready to start cooking. The surface of the disc heats up quickly near the center, with temperatures getting surprisingly hot. Moving out from there, things cool off some but remain quite warm, even near the edge of the disc. The regulator on the propane valve allows for fine adjustments, giving chefs a chance to dial in the level of heat they need.

The disc’s large surface area provides plenty of space for camp chefs to operate. The high-heat center is perfect for frying steaks, burgers, and other meats, while the outer rings work well for grilling veggies or french fries. It is even easy to move things further out from the center when you just want to keep them warm while waiting for other items to finish cooking.

With a bit of planning, it is easy to cook an entire meal on the FireDisc, but it takes some time to get accustomed to its nuances. When first using the cooker, you’ll want to be diligent with where you place various foods and closely watch them as they cook. Some things will fry up faster than you expect, while others may take a little longer, depending on their placement. But after a couple of sessions, you’ll start to get the hang of it and will soon be making all kinds of creative concoctions. 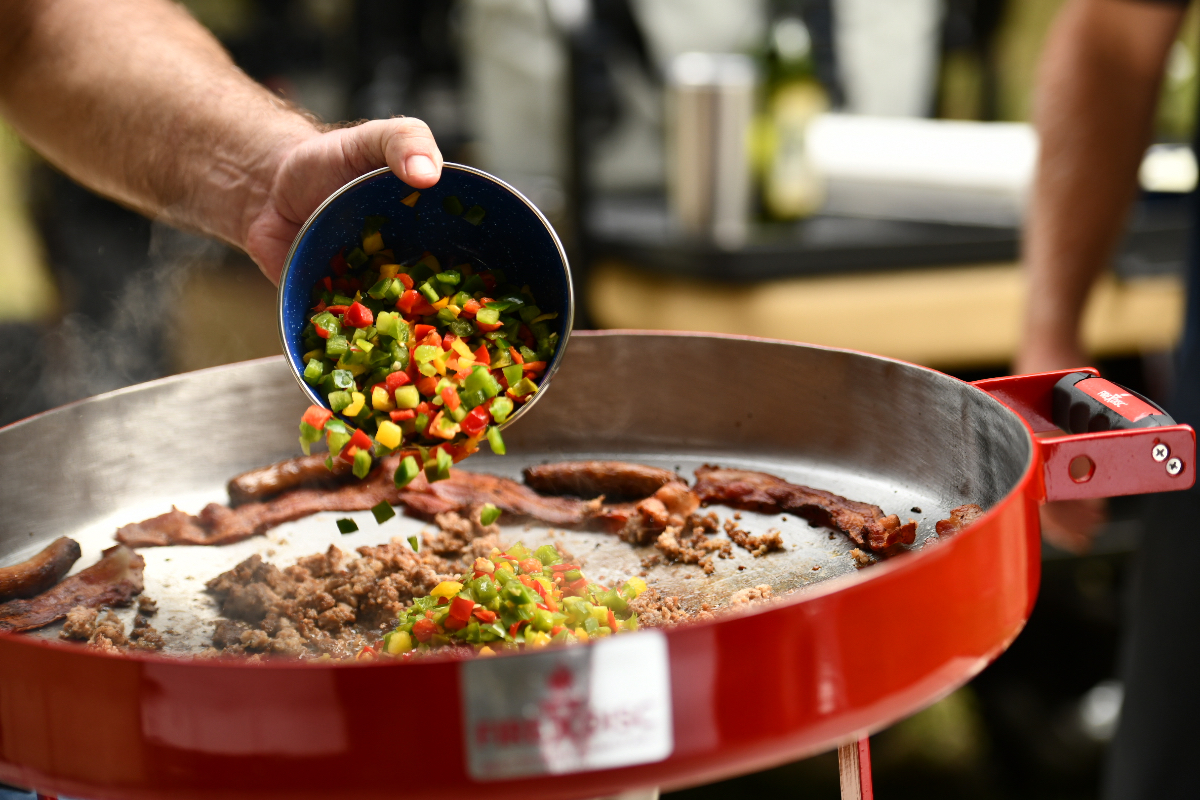 For new FireDisc owners, there is a temptation to set up the cooker and start using it as quickly as possible. Before you do that, however, there are a few hoops you have to jump through to prepare the cooker for use. Those include washing the surface with soap and water and heating it up for 20 minutes. After that, you’ll need to let it cool down, then apply a liberal amount of cooking oil to the bowl, then heat it back up again until it begins to smoke. Repeat that process two or three times, and you’ll finally be ready to go to work.

As if that wasn’t enough, there is also a specific process for cleaning the disc after each use. That involves washing it with hot water, wiping it clean, and then seasoning it with a thin layer of cooking oil. Once you’ve done this a time or two, it becomes routine, only requiring a few minutes to complete. But it is an essential part of keeping the cooking surface in tip-top shape and should be done in a timely manner.

These steps are in sharp contrast to using a traditional grill, most of which don’t require a similar level of maintenance. But the FireDisc is more versatile than a typical grill and more portable too. Its ability to cook a wide variety of foods and dishes is very impressive, and serious campground cooks won’t mind the extra steps it takes to keep it running at peak efficiency. More casual users may be put off by these additional requirements, however.

The FireDisc is a unique cooking tool with much to offer RVers. Its ease of assembly and breakdown make it more portable than a traditional grill, and its larger cooking surface gives it the edge in versatility too. Its learning curve, out-of-the-box preparation process, and cleaning requirements will likely turn off some users, but those who stick with it will find it to be a rewarding option when it comes to preparing meals.

The FireDisc comes in two colors—red and black—and in short (2 ft.) and tall (3 ft.) models. Both versions are fairly pricey, selling for $479.99 and $499.99, respectively. They do go on sale frequently, however, which eases the cost of entry to a degree. That said, there are portable gas grills on the market that are less expensive but may not be as versatile or ruggedly built. The FireDisc is built like a tank and feels like it can take a tremendous amount of punishment.

Pricing aside, the FireDisc is a fantastic option for cooking at the campsite. Its unique design and large surface open it up for some highly creative uses, provided you don’t mind a bit of extra work to maintain the disc’s surface. Add in its portability and over-engineered construction, and you end up with a cooker that can go anywhere and survive in nearly any environment. Just don’t leave the disc out in the rain, as its surface can oxidize very quickly. A lesson we learned the hard way.

For more information, visit the FireDisc website, where you can order a cooker—and a number of accessories—for yourself. You’ll also find plenty of great recipes, user testimonials, and a thriving community of FireDisc users.