Christmas came early this year for Brinkley RV. While the high-profile startup expects its Model Z fifth-wheel to go into full production in January, the company shipped its first trailer the week before the holiday. The upscale luxury model promises to deliver outstanding features inside and out, merging modern design and technology with classic camping sensibilities.

Brinkley made waves earlier this year when it broke ground on three production facilities in Goshen, Indiana. Founded by industry vets Ryan Thwaits, Nate Goldenberg, Micah Staley, Ron Fenech, and Bill Fenech, the company’s goal is to deliver high-quality campers with unique features and outstanding build quality. The Model Z is the first of those RVs, with others soon to follow. 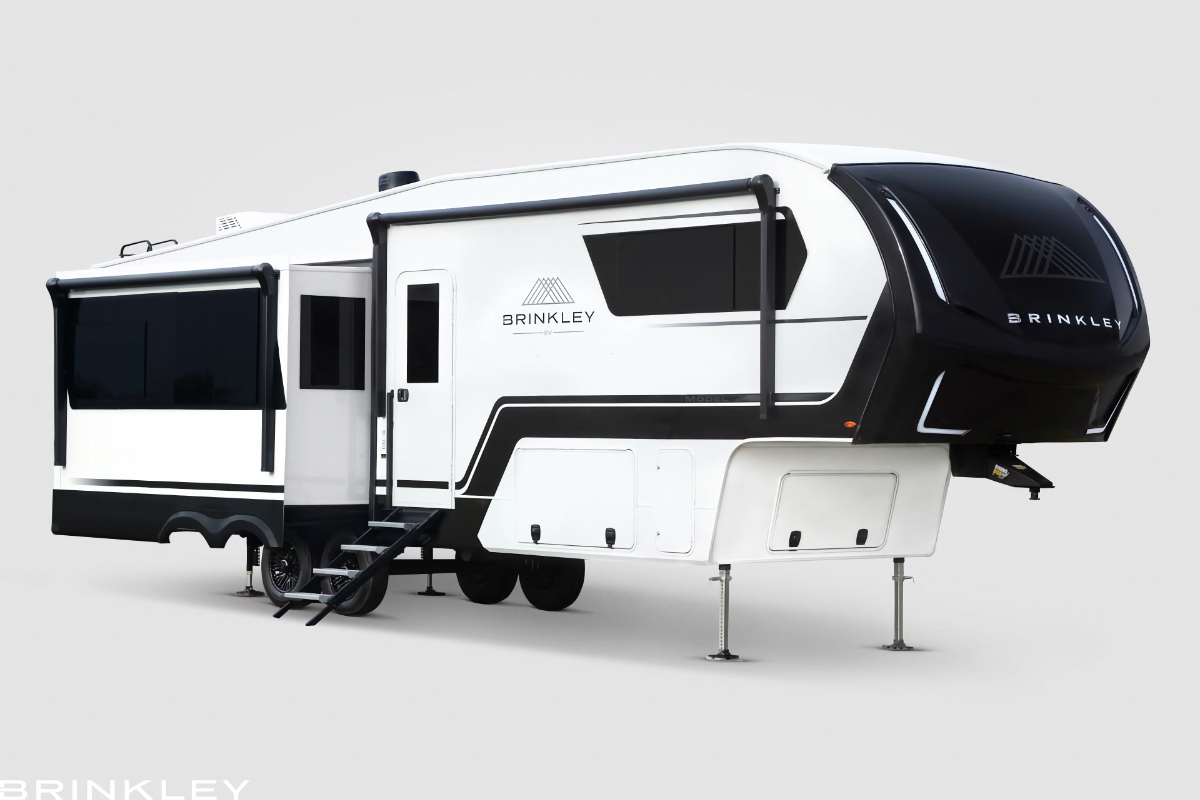 Currently, the Brinkley assembly line is producing two RVs per day, but production will ramp up after the first of the year. At that time, the team hopes to build 75 Model Zs weekly, delivering most of those trailers to its burgeoning dealership network across the country.

So what separates the Model Z from other fifth-wheelers currently on the road? For starters, it has a mid-size luxury trailer that weighs less than most of the competition. It features a sleek external look that is both aerodynamic and functional, resulting from months of planning and prototyping before deciding on a final production design.

Every aspect of the Model Z has been thoroughly thought out. Its features include a maintenance-free roof, a 370-watt solar panel connected to a 50-amp MPPT controller, and electric dump valves. It also comes with frameless windows that offer a 9” opening, wide-stance leveling jacks, and not one but two outdoor showers. Motion-activated lights illuminate the quad-entry stairway that lead into the interior, while sliding basement doors provide easy access to more than 130 cubic feet of exterior storage space.

Inside, the fifth-wheel trailer offers a spacious floorplan with plenty of amenities, including residential appliances, a double pull-out trash can, and an 84” pantry. The living space includes comfortable theater seating, a built-in entertainment center with a fireplace, and a couch that converts to a bed. Meanwhile, the bathroom has a large shower, sink, toilet, and linen closet.

The primary bedroom offers a king-size mattress, a large closet, and two bedside shelves with power outlets. A built-in dresser comes with a sliding top that includes a hidden storage area for securely holding valuables.

Other notable features include brass plumbing connections—a first for the industry—7K axles, and 17.5 H-rated Cooper tires. The fifth-wheel comes with fresh, grey, and black water tanks that are 75, 90, and 45 gallons in size, respectively. It also has 20 AC power outlets and six built-in USB ports for recharging mobile devices and running small appliances. Outside, owners will find two retractable awnings that provide plenty of shade.

All in all, the Model Z looks like a winner. While the trailer—and the company itself—are new, the experience of its founders shines through in this initial design. Expect to hear more from Brinkley in the future as it expands its RV line-up. For more informtion, visit the company’s website.