How to Keep Lovebugs Off the Front of Your RV

There’s No Love Lost for These Pesky Insects

There’s not much to love about lovebugs. These prolific bugs, also called honeymoon flies and double-headed bugs, seem to swarm during their mating season. It’s practically impossible to avoid them. And if you’ve ever driven anywhere near the gulf coast in any vehicle, from an RV to a motorcycle, you know it’s like driving through a rainstorm of tar.

How do you keep lovebugs off the front of your RV? Well, in short, you don’t. If you’re driving around the gulf coast during their mating season, avoiding them is all but impossible. There are, however, different ways to handle them.

Lovebugs are a pesky version of a bug called a March Fly. They’re called lovebugs because, when they mate, they get stuck together—even when they fly. Unfortunately for humans, their larvae are quite beneficial to us as they feed on decaying vegetation. Because in every other way, they’re a significant problem.

Lovebugs mostly exist across the southern United States, particularly close to the Gulf of Mexico. However, they’ve been spotted elsewhere: all across Florida, in Georgia, and even South Carolina. But if you’ve driven through Florida, Louisiana, Alabama, Mississippi, and even parts of Texas, you’ve likely encountered them.

Why Are Lovebugs a Problem?

It might not be fair to call them a problem, but rather a nuisance. They tend to mate twice a year, during periods called “flights.” In these flights, males and females literally join together and take to the air. There are two primary flights: one in spring (April-May) and one in fall (August-September). During these flights, there can be literally millions of lovebugs floating through the air.

Thankfully, they don’t bite or sting and don’t convey any kind of disease. But, that’s where the niceties end. Because there are literally droves of lovebugs in the air, automobiles and RVs often get in their way. Windshields, grills, side view mirrors, and anything else jutting out into the air will get smacked with these insects. And they stick tight.

The reason why boils down to body chemistry. Lovebugs are naturally acidic, especially when left to dry. It only takes an hour or two for the pH of a dead, stuck lovebug to drop from 6.5 (which is fairly neutral) to 4.25, which is acidic as tomato juice. If you’re traveling, especially in Florida, an hour or two in a vehicle or RV is nothing. Therefore, once you reach your destination, you’ve got an RV that’s absolutely riddled with lovebugs that are notoriously difficult to get off.

What’s worse is that in some cases, the acidity of these little buggers can actually leave etch marks in paint and finishes. They can also clog radiators resulting in engine overheating and smear on windshields obstructing your vision. 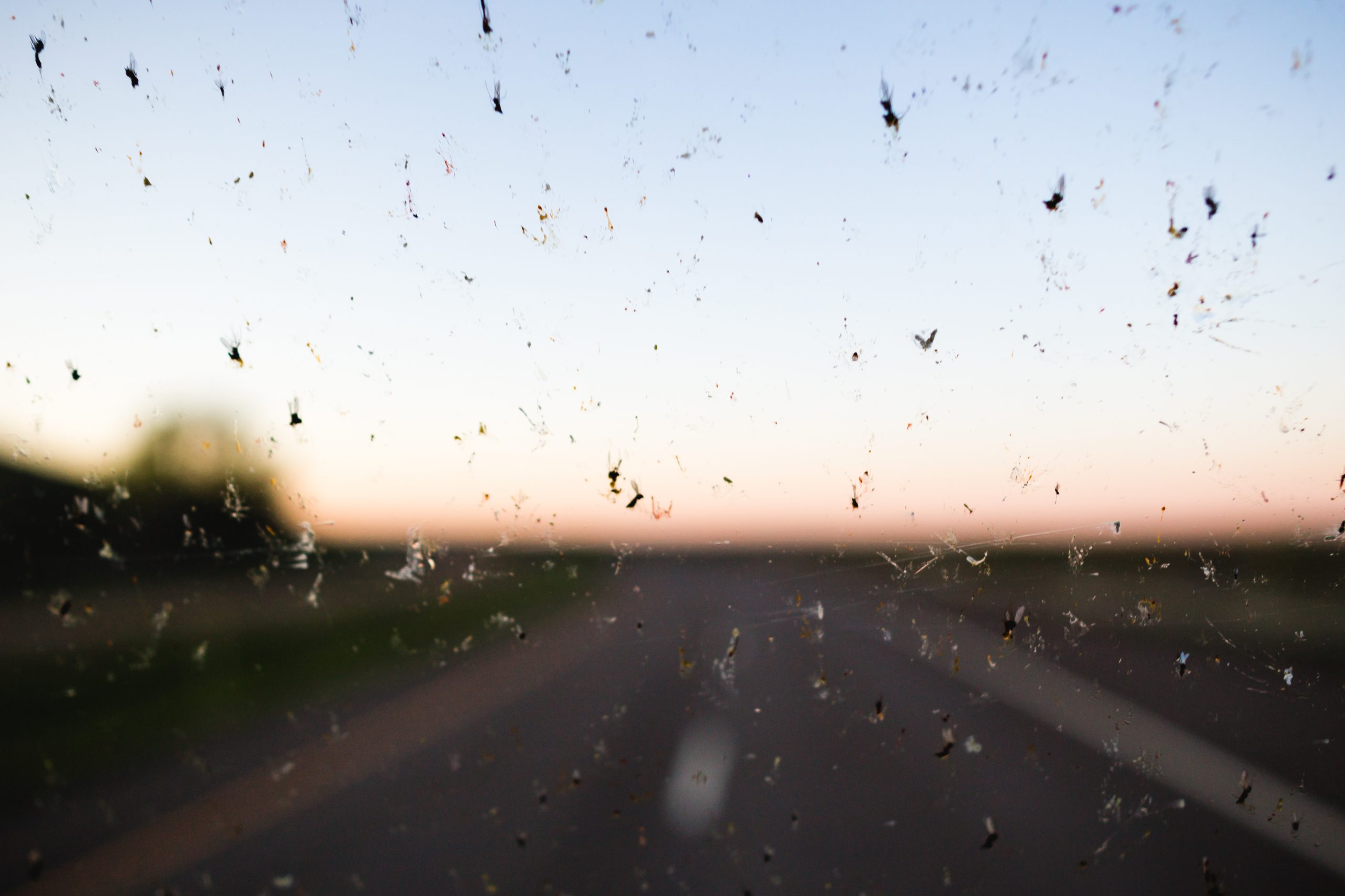 How to Avoid Lovebugs

The simplest way to avoid lovebugs is to choose other places to vacation (or to live) than the Gulf Coast area in spring and fall, during the two primary flights. Otherwise, lovebugs are a sad truth while residing in these locations during these times of the year.

Alternatively, you can try to drive more at night. They’re the worst between 10 AM and 6 PM when temps are above 84 degrees. They like the heat and they’re usually up and around in the air during these times. It’s inconvenient, but if you’d like to avoid them, try driving later at night or earlier in the morning.

Unfortunately, you’re far better off knowing the best ways to remove lovebugs from your car and RV than trying to avoid them. Because people have been dealing with them for so long, they’ve developed several nice ways to remove the sticky bug carcasses.

How to Clean Lovebugs Off Your RV

Once lovebugs are on your car, it can be a serious pain to get them off. There are a few things you can do to ease the process, though.

Wax On, Bugs Off

A healthy coat of auto wax on your tow vehicle or RV puts a barrier between the vehicle’s paint and the bug. This makes it less likely that they hurt the paint, and also makes it easier to get them off when you clean.

If you feel up to it, try to stop every couple of hours near a car wash to spray the bugs off before they harden and start to eat at the paint. While it may add significantly to your drive time, it can save damage to your vehicle or RV.

Yes, you read that right. Somewhat miraculously, a combination of plain water and dryer sheets seem to do the trick in taking off caked-on bug debris. Simply place a single dryer sheet in a spray bottle with plain water, let it soak, then spray it onto the bug-laden area. Use another dryer sheet to wipe it off. It works like a charm.

Prep for the Stick

A man in Florida grew so sick of lovebugs sticking to his vehicle that he actually invented a spray to prevent the stick from occurring. The spray, called Bug Shield on Demand, creates a coating on your car so that when lovebugs stick to your RV or vehicle all you’ll need to remove them is water. It doesn’t just work on lovebugs, either. It protects from all bug debris.

You don’t need any fancy tricks to clean lovebugs off your car. In fact, simple soap and water will work. And for the tough, baked-on bugs, you can use a special enzymatic cleaner—and there are several types available. A good scrub brush and microfiber towel will add a little bit of shine once the bugs are gone, too.

Make sure to implement some of these tips next time you’re traveling through the Gulf region and, you’re sure to be in the clear, both you and your RV’s exterior! 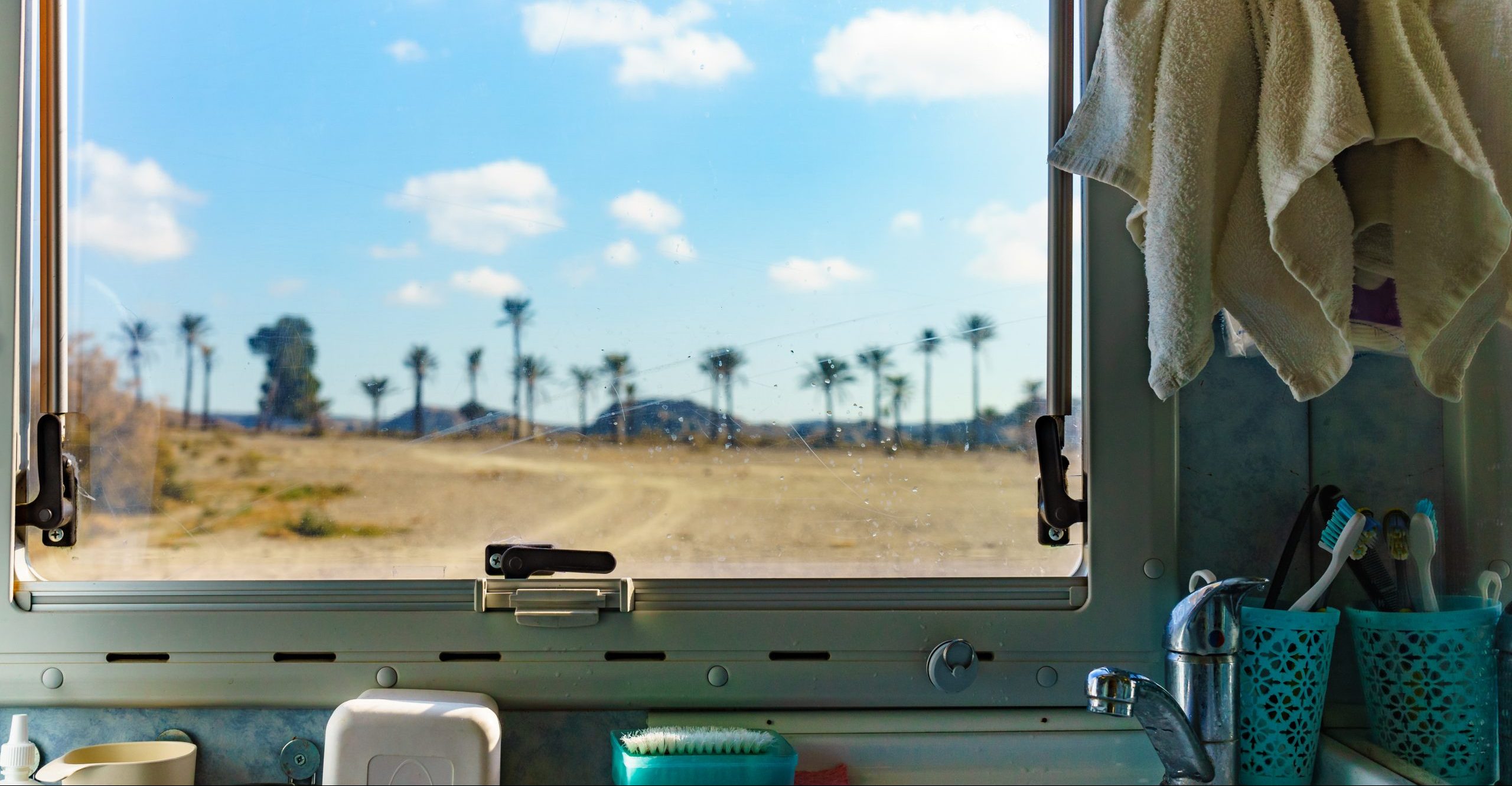 How to Easily Remodel Your RV Bathroom

How to Offset Your RV’s Carbon Footprint

How to Store Your RV in Warm Weather