You may not see as many truck campers in RV parks as you do traditional travel trailers and fifth-wheels, but these RVs that you load onto the back of a pickup are popular among tens of thousands of people nationwide. Typically, truck campers are purchased by RVers who also like to get off the beaten path.

‘’There’s a freedom in not having to pull anything behind you if you don’t want to and, still, you’re in an RV,’’ said Dustin Johns, president of Travel Lite Inc., of New Paris, Indiana. ‘’People with truck campers can just get up and go wherever they want. There are no restrictions.’’

Perks of A Truck Camper

Truck campers have other attributes, notes Mark Hovanec, marketing director for Lancaster, California-based Lance Camper Manufacturing Inc. ‘’A truck camper is the most versatile RV on the planet for a couple of reasons,’’ said Hovanec. ‘’You can take the camper off when you camp so that you can run errands. There’s still a process when unloading, so this works best when you’ll be camped in one spot for several days. The other thing is you can tow a trailer behind the truck with your sporting gear, be it quads, motorcycles, a boat or whatever. And you also have the choice of the truck you want, high-end or something more utilitarian.’’

Truck camper manufacturers have found a variety of ways to modify their products to make living in small quarters (the largest have a box length of around 12 feet and overall measure about 18 feet long from stem to stern) more comfortable.

Some have as many as three or even four standard (albeit, small) slide outs to increase the livable area. On the fuel-saving front, Four Wheel Pop-up Campers, of Woodland, California, has paid attention to aerodynamics by engineering a roof that lowers vertically to approximately 10-12 inches above the truck cab to reduce wind drag.

Truck campers are particularly popular in the Western states, where RVs can be sited next to a wilderness stream or lake on U.S. Forest Service or Bureau of Land Management property. ‘’In the Northwest, you have a lot of mountains and open areas,’’ said Doug Karr, national training manager for Northwood Manufacturing Inc. ‘’With a truck camper, you can get back on the backroads. Wherever the truck can go, your camper goes with it.’’

Although not standard on all models, four-season packages are offered by most truck camper manufacturers with features such as heated and enclosed tanks, extra insulation, dual-pane windows and furnaces with higher Btu ratings.

Here’s a look at some of some of the most popular brands for truck campers.

Adventurer LP, is based out of Yakima, Washington. The company produces four models: The Adventurer, Eagle Cap, Overlander, and Scout. 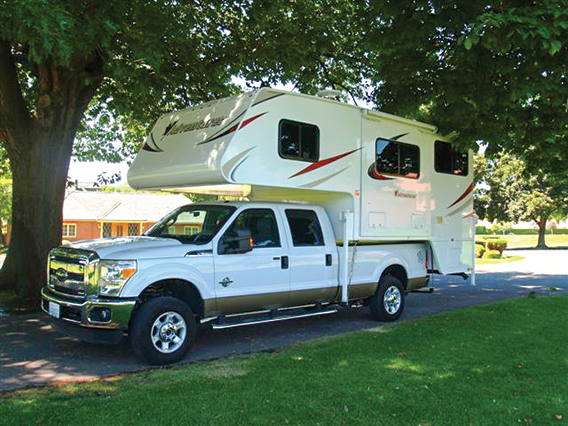 Bigfoot Industries in British Columbia, Canada, offers 2 truck camper models, the 1500 and 2500. They’re available in 8- to 101/2-foot configurations in its Bigfoot model camper series, including two 9-footers that are said to be suitable for either long- or shortbed pickups. Built marine-style with top and bottom molded fiberglass shells, Bigfoot truck campers contain no framing, which eliminates heat transfer. Bigfoot campers are outfitted for four-season living with heated-and-enclosed tanks, dual-pane windows, double-pane skylights and ducted furnaces. 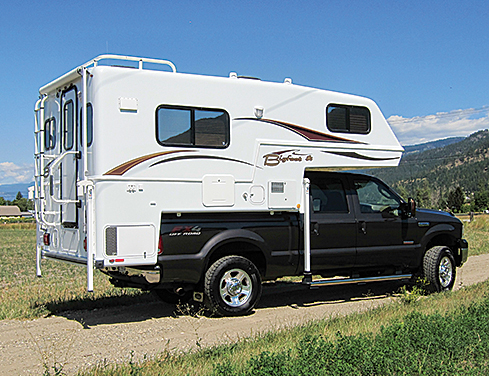 Four Wheel truck campers from Four Wheel Pop-up Campers of Woodland, California, have the advantage of excellent aerodynamics due to a roof that drops by 30 inches to lower the profile. In fact, when traveling, the cabover is only 10 inches higher than the roof of the truck. That circumstance is accomplished by articulated lifts with spring-loaded piano hinges that raise and lower closely fitted, tent-like upper side panels. Built on welded aluminum frames, Four Wheel campers are designed for flat-beds, slide-ins, and toppers. 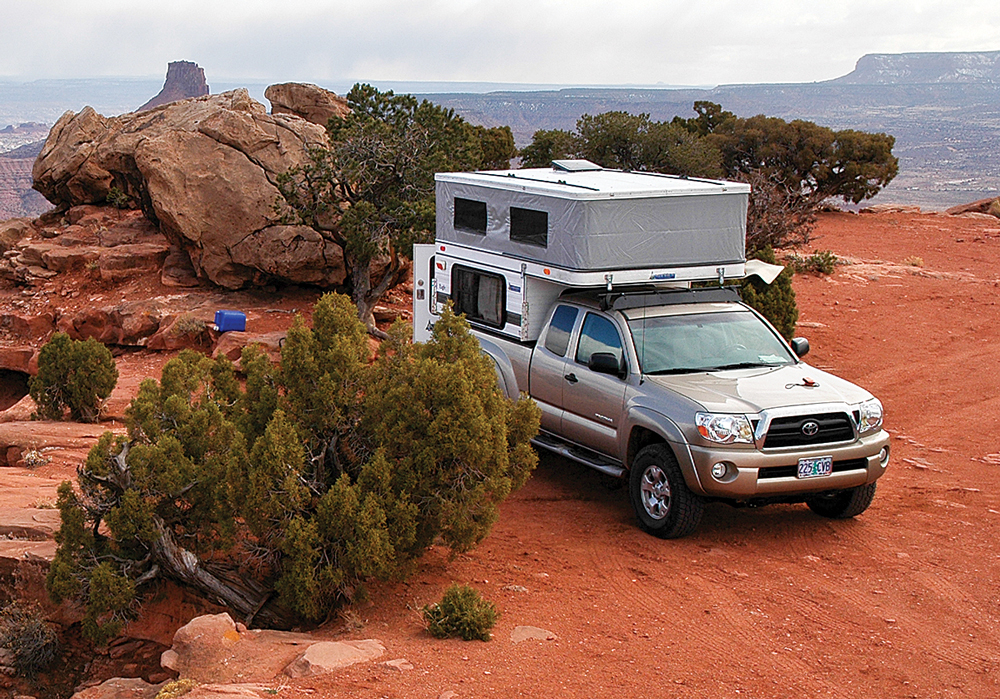 Host RV of Bend, Oregon, is a niche builder of single-, double- and triple- slideout campers and four-wheel-drive expedition vehicles. The company offers six camper models ranging from 8-foot 6-inch to 11-foot 6-inch designs. All Host models have an 8-foot-wide floor and are 100 percent aluminum framed with vacuum-bonded construction. Host builds its campers to order so custom features can be added. A 3-year structural warranty comes standard. 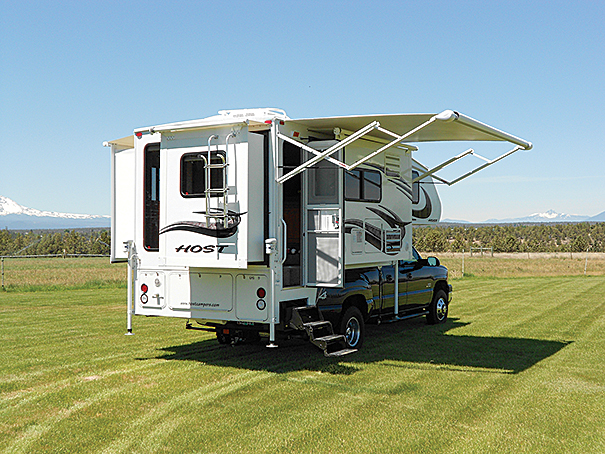 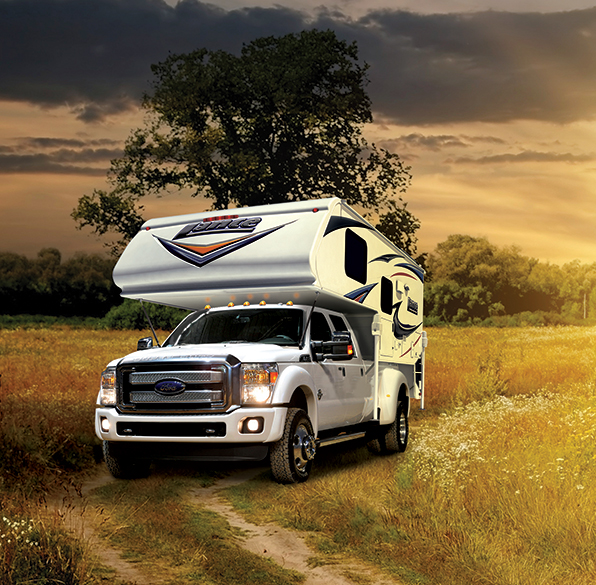 There’s no need to worry about water leaks in the Northern Lite truck camper from Northern Lite Manufacturing Ltd., Kelowna, British Columbia, Canada, because it’s built with a two-piece molded fiberglass shell in fashion similar to a boat. An added benefit is that it’s lightweight because Northern Lites require no interior frame. Campers come equipped with solar. Other features include solid hardwood cabinets and paneling, along with LED lighting inside and out. 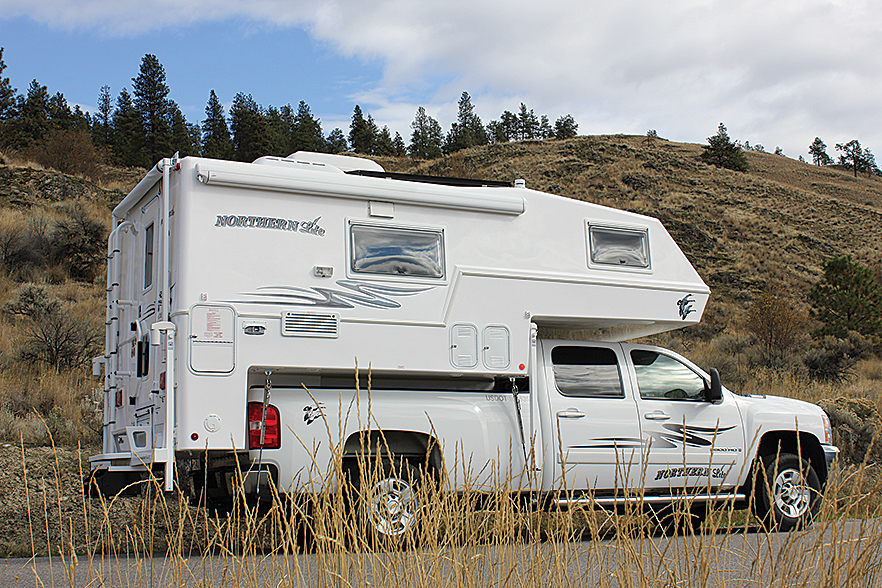 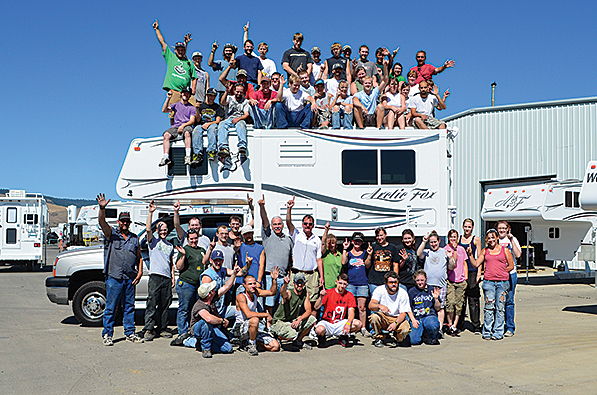 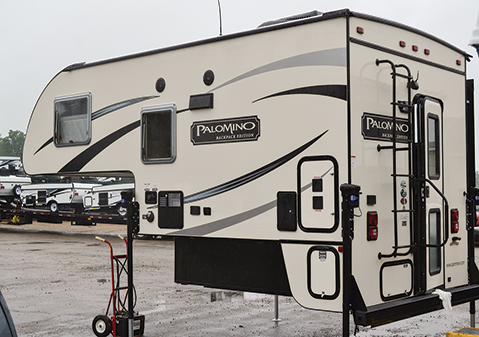 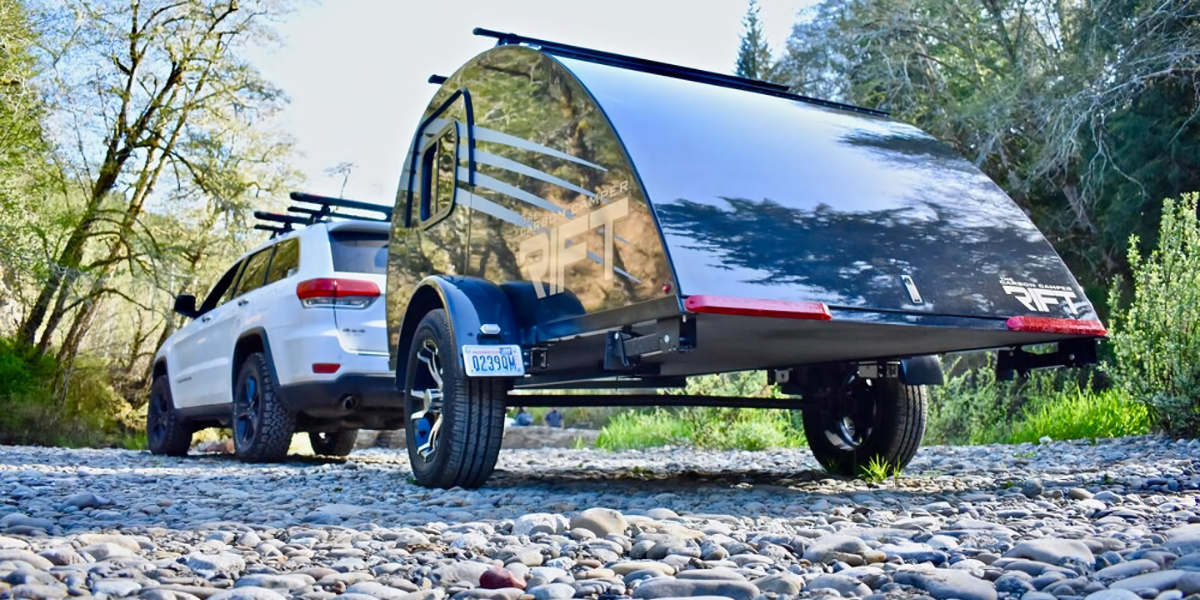 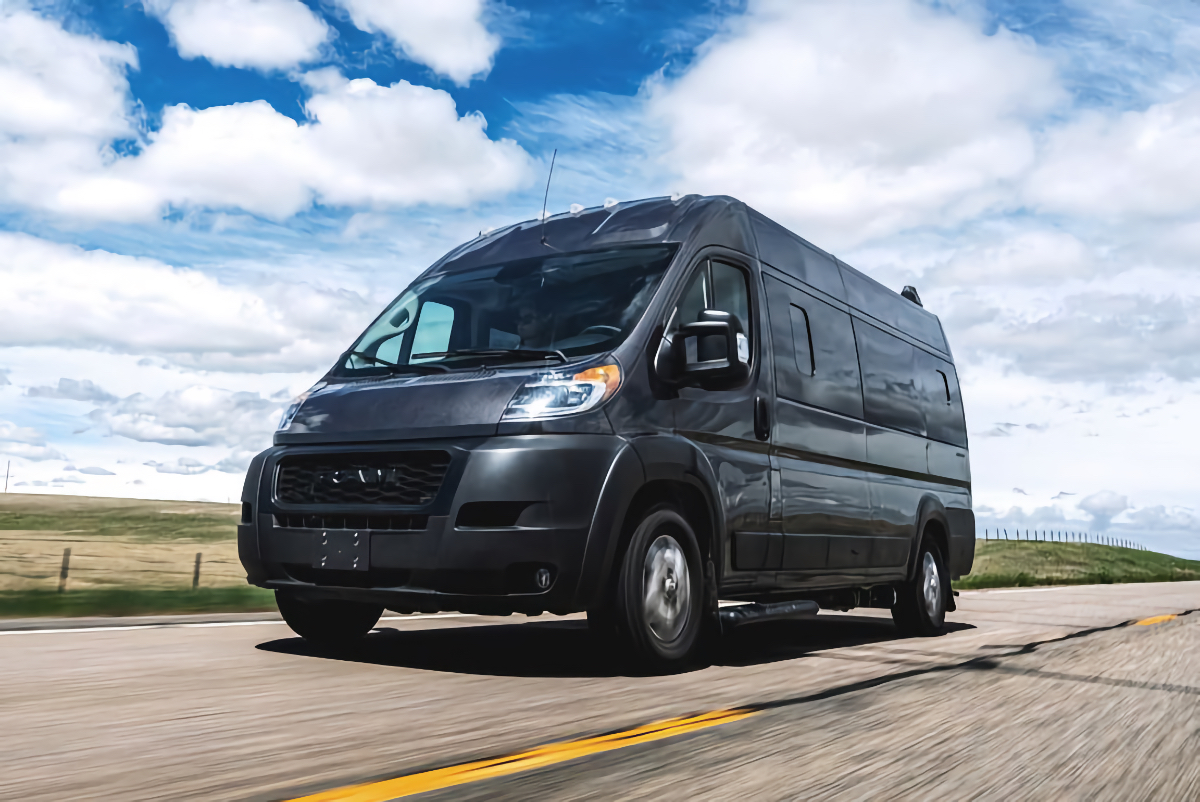 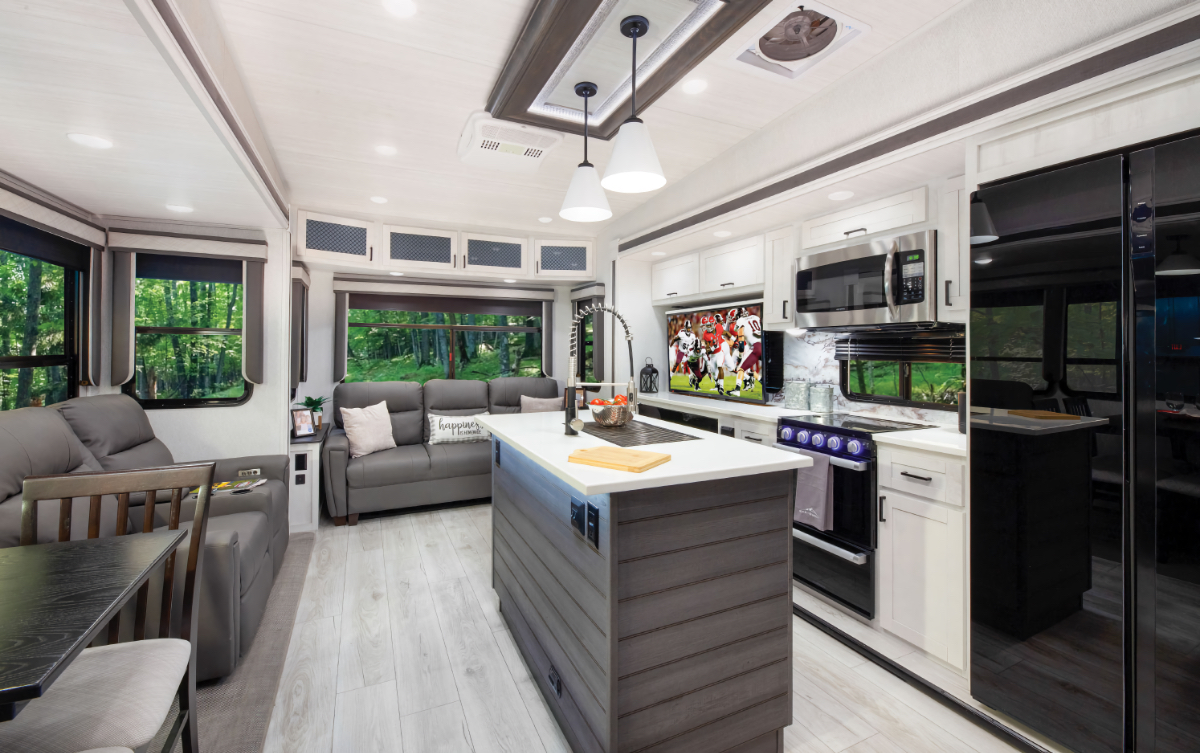