There is no denying that motorhome owners love their creature comforts. However, without the convenience of shorepower, an alternate source of energy is needed to adequately power the large array of electronic appliances and accessories while RVing off the grid. AC generators can supply temporary power needs but some are a noisy distraction when trying to enjoy the solitude of natural surroundings – and don’t forget about the fuel they burn. By relying on a power inverter rather than a generator, you can effectively run the most necessary electronic devices such as a cellphone charger, laptop computer, tablet, TV, satellite receiver, DVD player or even larger items on an individual basis such as a microwave oven, toaster, hair dryer or a coffee maker. It may sound like we’re a bit spoiled and not willing to give up conveniences, even when off the grid, but we’re not apologizing.

Power inverters provide whisper-quiet AC power at the flip of a switch. They change direct current (DC) to alternating current (AC), or 12-volt DC to 120-volt AC. Output voltage and frequency depends on the design and the wattage of an individual inverter. In order to realize the best efficiency of a power inverter, it must be paired to an adequate battery bank, based on the calculated needs of individual owners. Simply put: Larger inverters require larger battery banks.
Power inverters have evolved during the last few years moving from heavy mechanical devices to sophisticated models that use advanced electronics packaged in much lighter housings. The biggest advance in technology has been the transition from the cruder modified sine wave output to a pure sine wave capable of powering sensitive electronic devices. Pure sine wave is what we all have in our stationary homes, but there may be situations where a pure sign wave inverter is not necessary for your particular needs.
Power inverters range anywhere from a simple 150-watt plug-and-play model to a more complicated 3,000-watt model with all the bells and whistles. The more advanced models have multistage charging capabilities, which are designed to maintain batteries properly by conditioning them to battery-builder specifications. This is an important factor since battery banks will never realize their designed service life without proper conditioning, something most common so-called converter/chargers are not able to accomplish. Many of the more sophisticated inverters also have charge equalization modes, which use higher voltage to help break up battery sulfation, again prolonging the life of a battery bank.
Selecting an inverter that will fit your needs will require a little bit of homework. The first study will be to determine the wattage required to operate the electronic appliances that are normally used during typical trips. The conversion chart found on this page can help users determine their approximate power requirements. It’s important to confirm the exact power output of all electrical appliances and accessories. Don’t underestimate normal usage; doing so will only lead to disappointment – and the need for an expensive upgrade – later on. Keep in mind that although it may seem convenient to purchase an inverter large enough to run all desired appliances and accessories, the drawback will be the added cost of the inverter, labor and a more expensive battery bank. So a bit of advance planning is advised.

Every appliance will have a data label that provides the power requirements. Simply add up the wattage for all the appliances that may be running at the same time and compare that figure with the continuous output rating of the inverter. All inverters have a surge, or peak, rating, which should not be added into the formula used to calculate normal power requirements. For example, a 900-watt inverter may have a continuous output of 840 watts. Microwave ovens require a tremendous amount of surge before leveling out. LCD televisions and cellphone chargers do not require a surge allowance.
Determine whether you need a modified sine wave or a pure sine wave, also known as a true sine wave inverter. The pure sine wave inverter is more efficient than the modified sine wave inverter and almost twice as efficient when used to power certain appliances.
A modified sine wave inverter can damage sensitive devices over a period of time. Microwave electronic control panels often will not function on a modified sine wave inverter, as the electronics will not recognize that type of power. The more sensitive the device, the less likely it will function on a modified sine wave. When updating an older RV with new televisions and electronics, it’s best to upgrade the inverter to a pure sine wave model.
With so many makes, models and features to choose from, it will take some diligent research to find the one that meets your specific needs. Remember, inverters make 120-volt AC power, and using adequate wiring, fuses or circuit breakers as appropriate and specified in the installation procedures are all critical to safe usage. In many cases there are specific mounting requirements that must be considered when planning the installation.
Hire a professional to perform the installation according to the state, local and RV electrical codes if you are not qualified to perform electrical procedures. 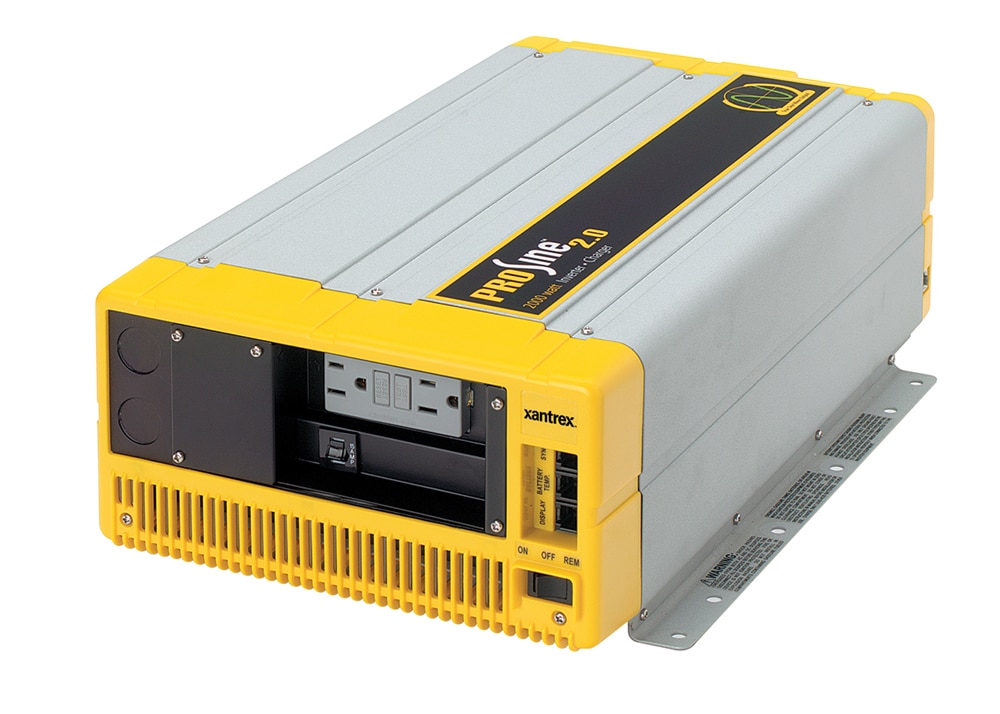 Power inverters perform extremely well when the batteries are linked to a solar-panel system designed to efficiently charge the designated number of batteries that are onboard. When using an inverter, the batteries must be kept charged adequately to provide the necessary service to make silent 120-volt AC power without being tethered to a hookup pole.
There are many inverter options on the market. Listed below are some of the popular brands and models.

These models are equipped with a double GFCI outlet, built-in display, USB port and an optional in-line 15-amp transfer relay. A remote on/off switch is offered, which allows the user to control the inverter from inside the motorhome. The transfer relay simply plugs into the front of the inverter and allows you to pull one circuit from the breaker box to supply power to an appliance from shorepower or the inverter. Perfect for TV, satellite receivers and DVD players.

Xantrex’s flagship PROsine 2.0 2,000-watt inverter/charger is a pure sine wave unit with a three-stage battery charging circuit. It has a built-in 30-amp transfer switch and a remote panel. This PROsine 2.0 sells for $2,098 and has a two-year warranty.

The Freedom 2,000-watt inverter/charger, model 458, features a three-stage battery conditioning circuit, filtered modified sine wave output, built-in transfer switch and an optional remote panel. The 2,000-watt unit is priced at $1,495, while the 2,500-watt version goes for $2,083. Both are covered by a two-year warranty.

For those who want the benefits of a higher pure sine wave output, the Xantrex Freedom SW series is available. It has a built-in transfer switch, three-stage battery charging, an optional remote panel with auto generator start, and sequence power manager. The SW is available in 2,000- and 3,000-watt sizes, sells for $2,090 and $2,378 respectively, and is protected by a 30-month warranty.

The Magnum line of inverters is available in several watt ratings and offers some interesting features. At the top end of the scale, Magnum has introduced its Hybrid MSH3012M pure sine wave inverter. The Hybrid is designed to run concurrently with small AC generators to provide higher wattage power. Most inverters rely on a transfer switch that allows the motorhome’s appliances and accessories to run on 120-volt AC power from the campground utility hookup or from the onboard generator. Using hybrid technology, the Magnum allows the inverter to recharge the batteries when there’s surplus power available or to work with 120-volt AC power from the hookup or generator and combine the energy for higher loads. The Hybrid has a 3,000-watt rating and offers five-stage charging, including equalization and a proprietary Battery Saver mode. An optional remote panel is available. The Hybrid is protected by a three-year warranty and has a $2,779 price tag.

The company’s MMS 1012 series pure sine wave inverter/charger is rated at 1,000 watts, has a built-in transfer switch and can be ordered with a remote panel. It sells for $1,199 and carries a two-year warranty.
The MS 2000—20B, also a pure sine wave unit, is rated at 2,000 watts and features a 100-amp charger. The use of two optional circuit breakers eliminates the need for a sub panel. Optional remote on/off switch with display is available. Price is $2,099 and there’s a 2,800-watt model (MS 2812) that goes for $2,479. The MS 2812 includes a three-year warranty.
For those looking to run smaller accessories that can handle a modified sine wave, the MM 612 is good for 600 watts. An optional remote panel is available and the unit sells for $529 with a two-year warranty.

Camping World offers a number of Nature Power modified and pure sine wave inverters at value pricing. Models that offer a modified sine wave have a front panel with LED readouts, a double AC outlet and an optional remote on/off switch. The top modified sine wave model is rated at 3,000 watts and sells for $599.99. Right below that model is a 1,000-watt inverter that carries a $149.99 price tag and the smaller, 400-watt model is $69.99. All of these inverters feature a one-year warranty.

The FX series inverters are available in 2,000- or 2,500-watt configurations. A pure sine wave RV/Marine model features a 30-amp transfer switch, an intelligent battery-charging system and a five-year warranty. Prices start at $1,633.