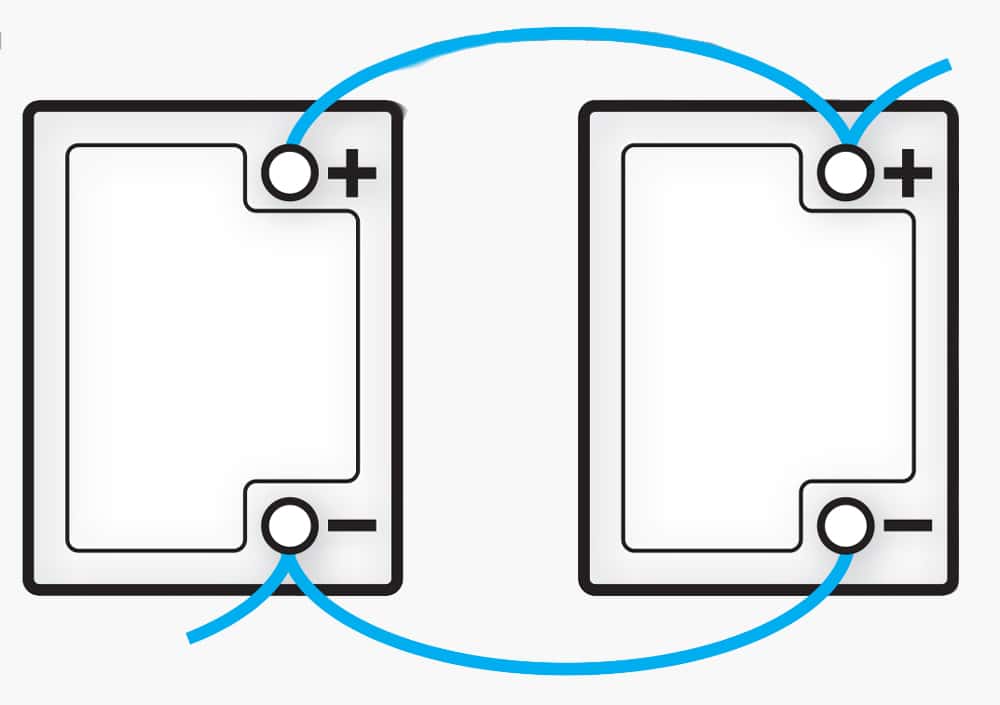 Batteries are the lifeline of any motorhome, and proper care and maintenance will keep appliances and accessories running for a long time

Since the beginning of modern RVing, the concept has always been to be able to take the comforts of home along on our travels, and as we have progressed into the electronic age, our dependence on portable electricity has continually increased. Today’s motorhomes have advanced direct current (DC) electrical systems with battery banks to help power the demands whether the motorhome is on the road or off the grid. Having an understanding of how a battery bank is designed and the proper methods to maintain it will help keep the lights on for a long time.

Due to their overwhelming popularity, we will concentrate on the most common batteries used in RVs: flooded, absorbed glass mat (AGM) and gel cell, in six and 12-volt configurations. We will not address lithium-ion batteries as they are, for the most part, mainly installed in the aftermarket by specialized installers, and require different equipment to run the systems than what is installed in most production motorhomes.

Every motorhome manufactured today has two DC electrical systems, one for the house and one for the chassis. Electrically separating the systems is common in production motorhomes because of the chassis being manufactured by an independent vendor requiring its own DC system, and also that it really makes good sense. After all, if the chassis has its own batteries and system that are electrically isolated from the coach batteries and the 12-volt DC system, even if you leave the interior lights on and drain the batteries, the engine will still start.

The two DC systems generally utilize different types of batteries, and are frequently wired in different ways, so a discussion of battery types and how batteries are connected into a motorhome is in order.

The most common and economical type of battery on the market today is the flooded lead-acid (FLA), wet-cell battery. These batteries are basically a vented case containing cells, which are made up of lead plates and separators, one set of plates per cell. These cells are submerged in a mixture of sulfuric acid and water. Each cell delivers about 2.1 volts, so a 12-volt battery will have six cells, and a 6-volt battery, also common in RVs, will have three.

When charging, flooded batteries produce hydrogen gas, which can be explosive, so the batteries need to be housed in a well-ventilated compartment. It’s also important to keep the water level maintained with this type of battery, and to make sure they stay clean.

A variation on this technology is the AGM battery. Instead of the cells being submerged in a sulfuric acid and water bath, the electrolyte, as it is called, is contained within a special saturated glass mat, which separates the cells. Because of this technology, the chemical reaction within the battery is much more efficient than with typical flooded batteries, allowing faster charging, reduced sulfation and thus a longer life cycle.

AGM batteries are sealed, and therefore are maintenance-free and can be mounted in any position. The charging profiles for AGM batteries are similar to FLA, but annual equalization charges are recommended to eliminate sulfation, and to correct the slightly different voltages that occur from each plate as a normal part of cycling. Equalization is a process whereby a charger equipped with this function essentially overcharges the batteries slightly to eliminate sulfation on the plates, returning all the plates to an equal state of condition or charge. So, when used in an RV environment, a charger designed for AGM batteries is recommended.

Most starting batteries used in motorhomes are 12-volt batteries. Starting batteries are designed to deliver a short burst of high power to start an engine. These batteries are sized in Battery Council International (BCI) group numbers which, while designating the case size of the battery and not the amp-hour size, will note a change in the capacity of the battery because it is larger or smaller in physical size. Gas-powered motorhomes will usually have a single starting battery, whereas diesels, because of the additional current required to crank over a high-compression diesel engine, will have two.

Deep-cycle batteries, often called Marine/RV batteries, come in 6- and 12-volt configurations. Deep-cycle batteries are designed to deliver a lower amount of amperage over a longer period of time for things like appliance circuit boards, lighting, radios and so on in the living section of the motorhome. These are also described as the “coach” batteries, while the engine starting and operating batteries are the “chassis” batteries. Less-expensive motorhomes will generally have one or maybe two 12-volt coach batteries, whereas larger more expensive motorhomes with larger systems and heavier loads – including inverters – will have multiple 6-volt batteries.

This is where battery connection comes into play. Hooking up a single battery is a simple affair. The positive lead goes to the positive terminal, and the negative to the negative. However, to increase the available capacity, multiple batteries can be combined into a battery bank. Cumulatively, they provide more power to stay off the grid longer while using higher loads.

Series: Batteries wired in series increase the voltage in the system, but not the amps, nor the capacity of the bank. So, when we use 6-volt batteries, we wire two of them together, positive to negative, to create a single 12-volt battery. So, if each battery is rated at 225 amp-hours (AH), in the end, you still have 225 AH.

Parallel: Batteries wired in parallel do not increase the voltage of the system, but rather the amp capacity. So, if we have two 12-volt RV batteries wired positive to positive and negative to negative, we’ll still have 12 volts, but the amp capacity of the batteries doubles. (Only identical batteries should ever be connected.) So if each battery is rated at 255 AH, you will have 510 AH with this combination.

Battery maintenance should only be done after the batteries have been fully charged, and they should have no load on them when performing maintenance. Be sure to wear goggles, rubber gloves and other protective clothing when working with these batteries. Only work on them in a well-ventilated area. When removing caps, tilt the caps toward you, with the inner part of the cap tilting away in case there is splashing to avoid injury from the acid electrolyte.

It is essential that the plates in the cells remain completely flooded in order to operate properly and to avoid undue sulfation. Batteries that are allowed to dry out will have a much shorter life than those that have been maintained. Battery cells should only be filled with distilled water, and filled up to the bottom of the fill tube.

As an alternative to manually filling each cell, battery-filling systems are available from companies like Trojan Battery and Flow-Rite that will allow remote, semiautomatic filling of the cells, and are a great investment, especially if reaching the tops of the batteries is difficult.

Many RVers ignore the proper off-season storage of their motor­home’s batteries, which can be an expensive oversight, especially in below-freezing climates. Batteries that are stored outdoors in freezing climates must be kept fully charged, or at almost full charge, in order to prevent freezing damage to the plates and cases. The BCI service manual states that a battery at a 100 percent charge will freeze at minus 92 degrees Fahrenheit, while a battery at 20 percent charge will freeze at +19 degrees Fahrenheit.

Many RVers in cold climates spend hundreds or thousands of dollars unnecessarily replacing batteries due to poor storage practices. Once the RV is stored, if all the batteries can be kept on charge, then in most climates the batteries will be fine. If they can’t be kept on charge, they all should be removed from the RV, charged and stored in a cool, dry location, protected from the elements. The batteries should be given a boost charge in the spring before reinstallation if possible, or charged thoroughly using the motorhome systems once reinstalled. Lastly, don’t forget the chassis batteries. Often, they are not charged by the on-board charging system, so they may require a separate charger or battery maintainer.

The batteries are the foundation of the 12-volt DC electrical systems in motorhomes, and with a little care and understanding, can power our homelike comforts for a long time.