The CyberLandr, an all-electric camper/overlander designed by tech company Stream It, Inc., is specifically designed for use with the Tesla Cybertruck

Stream It, Inc., a Las Vegas based analytics company, has announced a camper/overlander for the upcoming Tesla Cybertruck called the CyberLandr™. The Cyberlandr’s key feature is its ability to stow and disappear entirely within the bed of the Tesla Cybertruck while allowing the tonneau cover and tailgate to close.

When folded, the CyberLander has a low center of gravity, zero aerodynamic drag, and minimal effect on range. The result is that it can go through more rugged terrain than traditional overlanders while fitting easily in parking garages or through drive-thrus. When the bed of the Cybertruck is needed, an available dolly can remove and store the CyberLandr.

The CyberLandr is all electric and has 500 watts of included solar panels to aid in charging its batteries. It also has an on-board four-stage water filtration system with UV sterilization. This means owners can replenish their water supply when boondocking using clear water from a lake or stream.

Inside, the CyberLandr has a recirculating shower, radiant heated floors, and a dry flush toilet. Plush, freestanding chairs recline into an RV-size queen bed. The CyberLandr’s marble-look porcelain kitchen countertop mirrors the Cybertruck’s dashboard. And, like the Cybertruck, CyberLandr has voice activated automation to control features like lights, electrochromic dimming windows, and even the faucet. The app also controls features to deploy and stow CyberLandr, and to view the 360-degree surround surveillance system.

The CyberLandr has an included StarLink dish that, with a subscription, provides Internet access and the ability to stream HD movies to the 32-inch SmartTV/monitors well as make and receive cell phone calls using Wi-Fi. The CyberLandr is available for pre-order today. 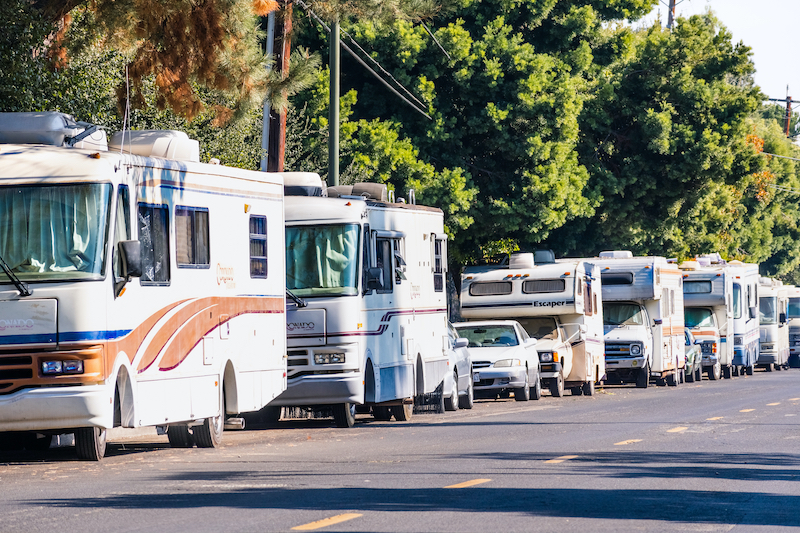 RV Shipments on the Rise

The 5 Best Travel Trailer Brands in 2021

Camping in the Winnebago EKKO