At Oliver Travel Trailers, Building RVs is a Family Affair

When Oliver Travel Trailers first launched back in 2007, the goal was to build an RV that was durable enough to last a lifetime. Founded by twin brothers Jim and John Oliver, the company set out to raise the bar when it comes to the craftsmanship and design of small towables. In the years since it has done just that while maintaining its roots as a family-run business. 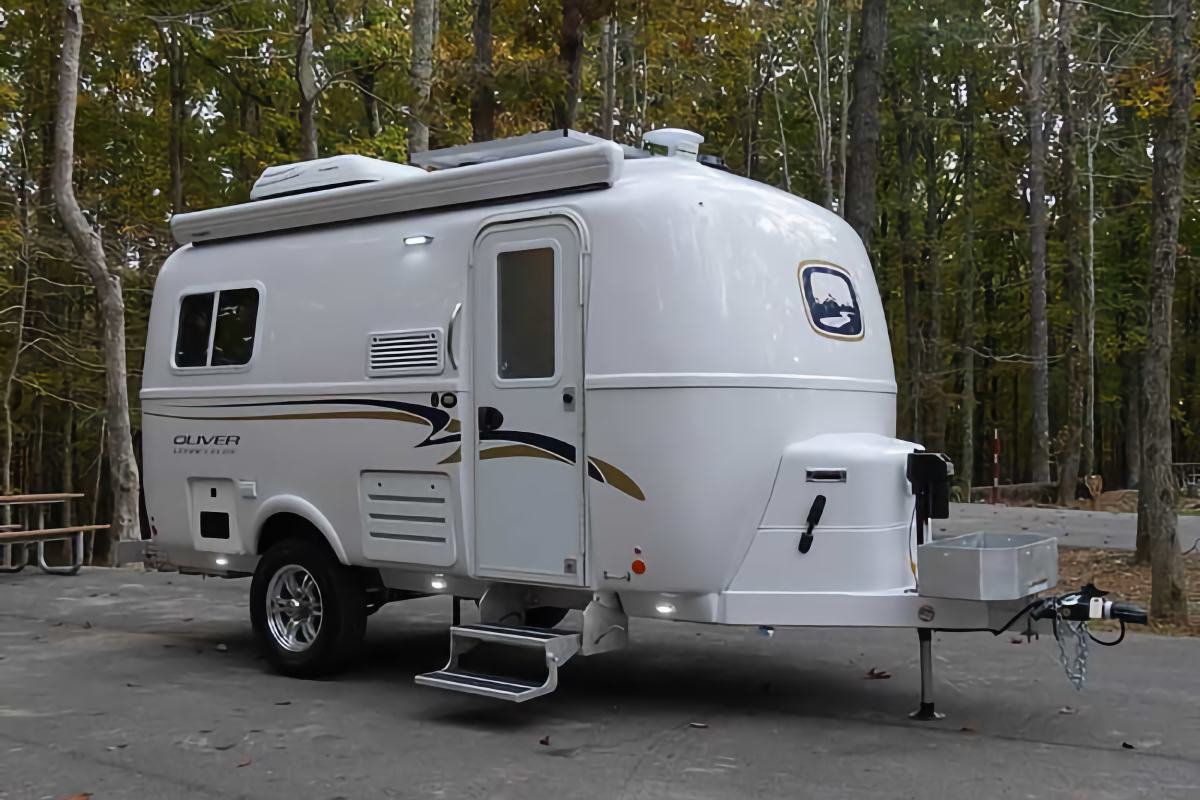 Before starting Oliver Travel Trailers, Jim and John had plenty of experience with RVs. Not only were the brothers and their families avid campers, their home foundation company used travel trailers as mobile workspaces at job sites. While this was incredibly convenient for the staff, those vehicles weren’t built for the challenges of traveling more than 60,000 miles a year. As a result, they often required extensive maintenance or would frequently end up falling apart after just two or three years in the field.

The idea to build their own travel trailers came after an especially challenging camping trip. The family set off on a weekend adventure just as cold weather set in. The RVs they used weren’t built for frigid conditions and lacked proper insulation to keep the cabin warm. Worse yet, the water lines froze, making things even more dangerous and uncomfortable.

Not long after that, Jim and John had a conversation about designing their own travel trailer. By tapping into their design and engineering expertise, they believed they could create an RV that was tough enough to survive in demanding environments and comfortable enough to be used in any weather conditions. The goal was to build a lightweight towable that was so durable and versatile that it could be used at company worksites and on family camping trips. 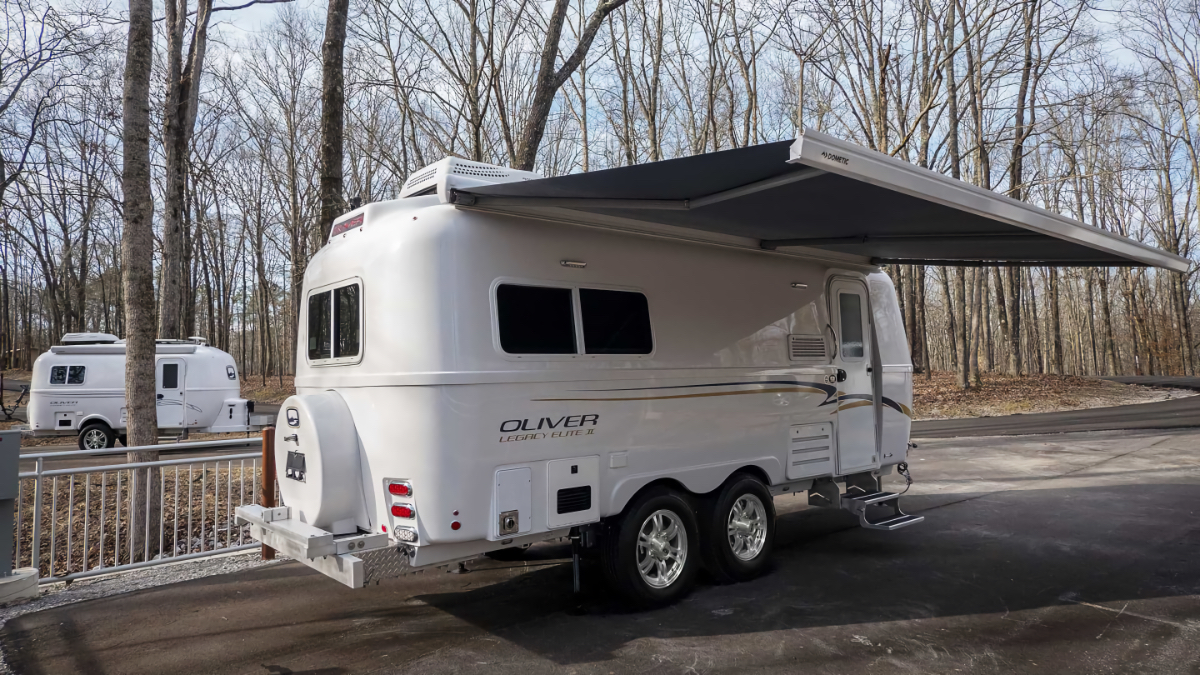 The brothers spent the next two years building prototypes and testing materials. Ultimately they decided on using a double-shelled fiberglass and composite hull, which was lightweight, incredibly strong, and required less maintenance than traditional models. The design also provided much better insulation, allowing camping in all four seasons.

The design the two men came up with was so good that they decided that other people might want to buy one too. This led to the launch of Oliver Travel Trailers, but unfortunately, John passed away before the first production model was fully assembled. The loss hit Jim hard, but he was more determined than ever to keep their shared vision alive. He forged ahead with their plans to build high-quality travel trailers to honor his brother, naming their first RVs the Legacy Elite and Legacy Elite II.

The company’s original models were very well received when they debuted in 2007. But not long after, the Great Recession hit the RV industry hard, causing even the most prominent brands to tighten their belts and rewrite their business plans. For the next several years, production was put on hold, and Oliver shifted its focus to making other products that were more in demand during the economic downturn. The company was in survival mode for a time, struggling just to keep its doors open.

But slowly, the economy turned around, and the industry began to bounce back. In 2013, the Legacy Elite went back into production, and a year later, the Elite II was revived too. The two towables have been in high demand ever since, and Oliver has grown into one of the highest-rated travel trailer manufacturers in the industry, routinely ranking among the best in customer satisfaction and long-term quality.

Despite Jim’s retirement in 2018, the company remains a family-run organization. His and John’s children took over the company, holding key positions in marketing, quality assurance, and day-to-day operations. They have continued the pursuit of their fathers’ goal of building outstanding travel trailers recognized for their durability and innovative features. Those efforts appear to be working, as the RVs have garnered a loyal following, with fans affectionally referring to the lightweight towables as “Ollies.”

Other features include a well-appointed kitchen complete with a two-burner stove, a microwave oven, and a refrigerator. The onboard bathroom has a toilet, sink, and faucet with a pullout shower wand. The trailer is solar-ready straight from the factory and has a powered pro awning with LED lights that provide shelter when spending time outdoors. 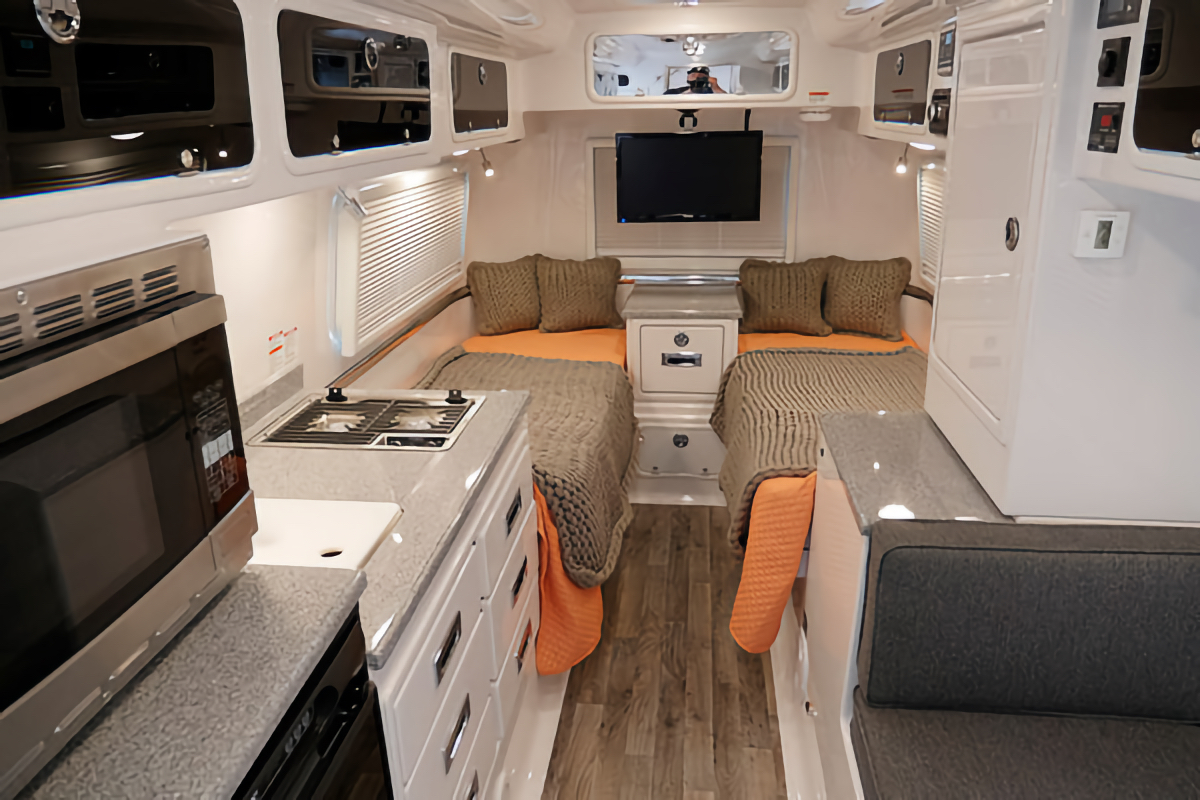 Available upgrades to the Legacy Elite include solar panels, an electrical system powered by lithium batteries, and an electronics package with a cellphone signal booster and wireless backup camera. Other options include a high-quality mattress, a Truma AquaGo water heater, an anti-sway hitch, and a stainless steel convection microwave.

The Legacy Elite II shares most of the same characteristics, features, and amenities as its sibling, just in a larger package. Its 23.5-foot length provides more interior space, allowing the towable to be both wider and taller. The double-axle trailer offers two unique floor plans, has seating for seven, and can comfortably sleep three. Its longer hull gives it enough room for an additional window, allowing more natural light to reach the interior.

In addition to building industry-leading fiberglass camping trailers, Oliver goes above and beyond when it comes to customer support. For instance, it offers assistance with obtaining financing and has an excellent warranty program. And when customers drop by the factory in Hohenwald, Tennessee, to pick up their new travel trailer, they’re given a complete orientation and walkthrough to ensure it meets all of their expectations. The company will even pay for the first night of camping to help new owners start to feel at home in their Ollie.

The company’s website is an outstanding resource for existing owners and potential buyers alike. It offers in-depth information about the Legacy Elite and Elite II and provides helpful troubleshooting options for resolving issues and the ability to submit a service request. The site also includes news about upcoming events—including the Oliver annual rally. There is even a page dedicated to the RV Lifestyle with tips for getting started camping, how to go boondocking, and more.

For all this—and much more—visit the Oliver Travel Trailer website.