Image Caption: Key West has some fo the most breathtaking seaside sunsets out there.

There are dozens of reasons to visit Key West, Florida, among them palm trees, turquoise water and unparalleled sunsets. But not for me. I came in search of Hemingway.

The free-spirited author of such classics as “A Farewell to Arms” is central to the history and mystique of this quirky island. Key West is a town that embraces its past, making it possible to walk the same sidewalks, drink at the same bars and even lounge by the same pool as the famous writer. There was just one obstacle to finding Hemingway — RV parking.

We had left our dinghy vehicle behind on this trip, and there is no public parking for oversized vehicles in Old Town Key West. We saw a few Class B’s squeezed into spots, but nothing to fit a 30-foot motorhome. Another camper saved the day by suggesting Fort Zachary Taylor State Park. Located an easy bike ride from the historic district, our entrance fee of $6.50 (per vehicle) gave us a spot for the day in a waterfront lot complete with a beach, shady picnic area and bathrooms. And pedaling turned out to be the perfect way to explore Key West’s narrow streets. 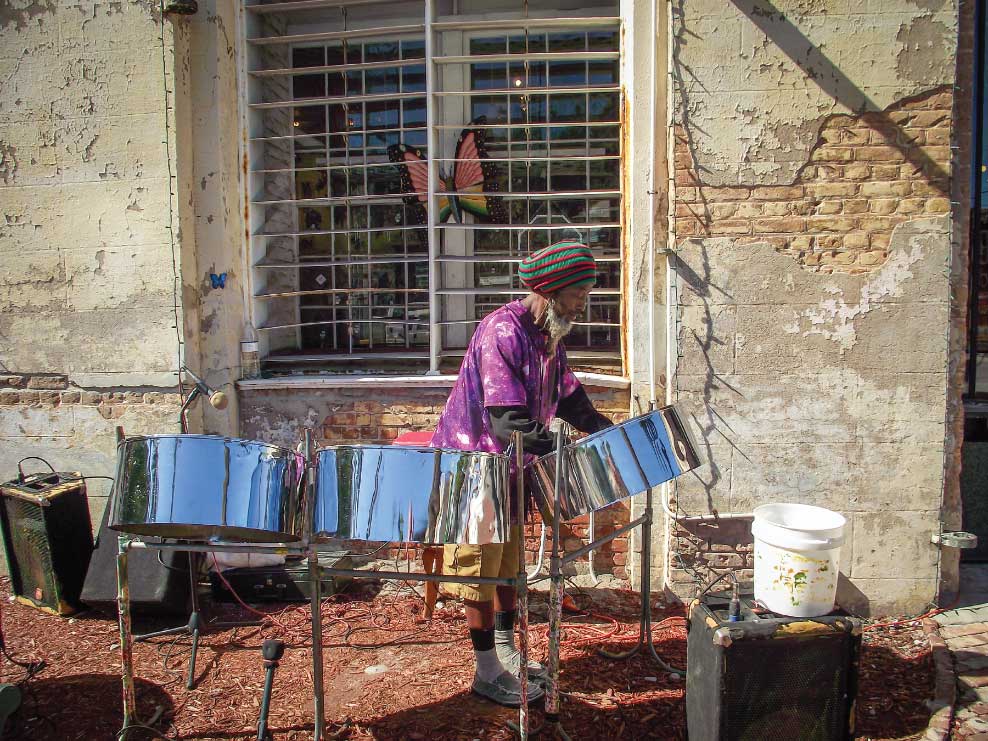 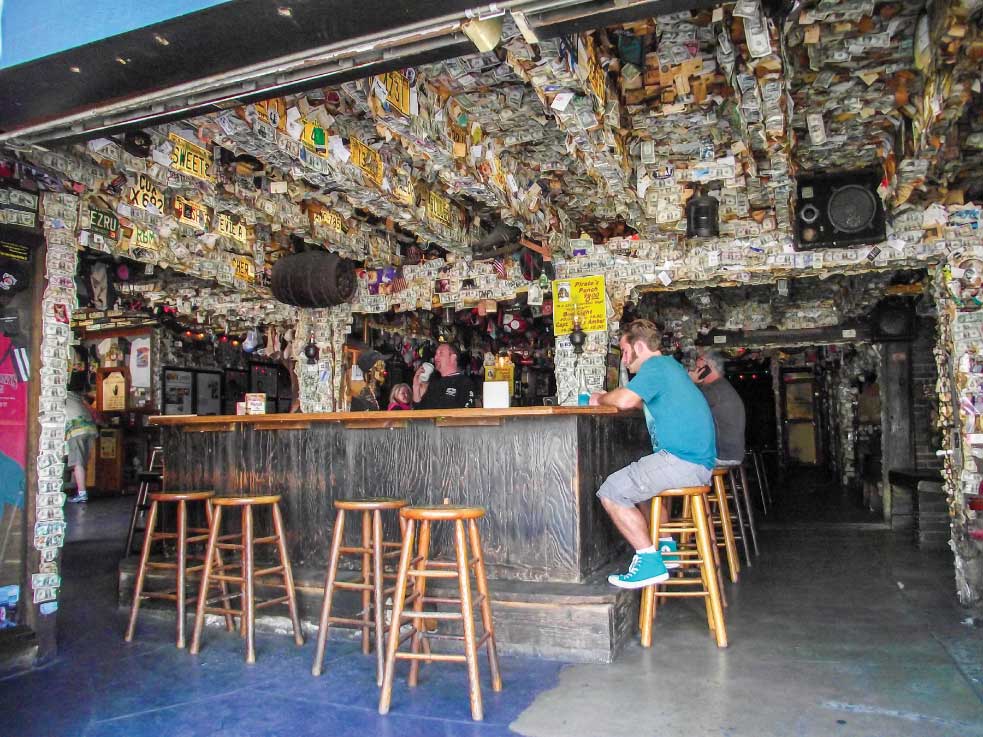 Captain Tony’s, the original home of Sloppy Joe’s, is a funky bar with a haunted history.

Our first stop was the Ernest Hemingway Home & Museum at 907 Whitehead Street, in the heart of Old Town Key West. A Spanish Colonial built in 1851, it was renovated by Hemingway and his second wife, Pauline, in 1931. Visitors can take a guided tour of the main house, Hemingway’s writing studio and the grounds, which include exotic trees and flowers as well as the famed 60-foot-long swimming pool. Dug into solid coral and complete with brilliant underwater lights, poet Elizabeth Bishop wrote that it “must be visible to Mars.” 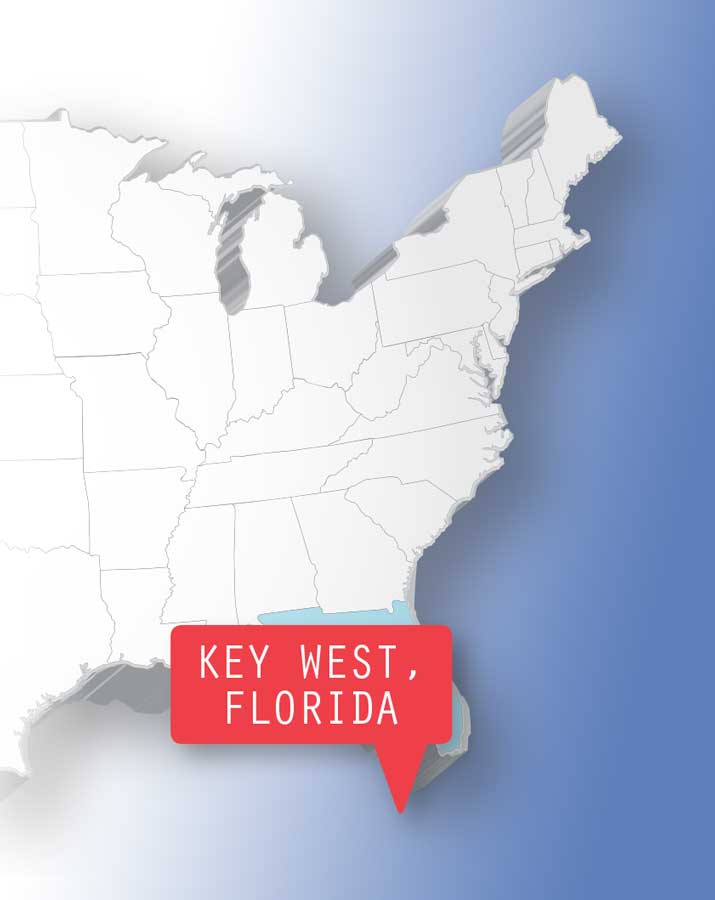 Getting There:Key West is about a three-hour drive from Miami; four hours from Fort Lauderdale. Take U.S. Highway 1 south into the Florida Keys. Just north of Key Largo, Highway 1 becomes the Overseas Highway, a designated All American Road. Mile marker signs designate each mile and line the side of the road. Numbers run from 127, south of Florida City, down to 0 in Key West. 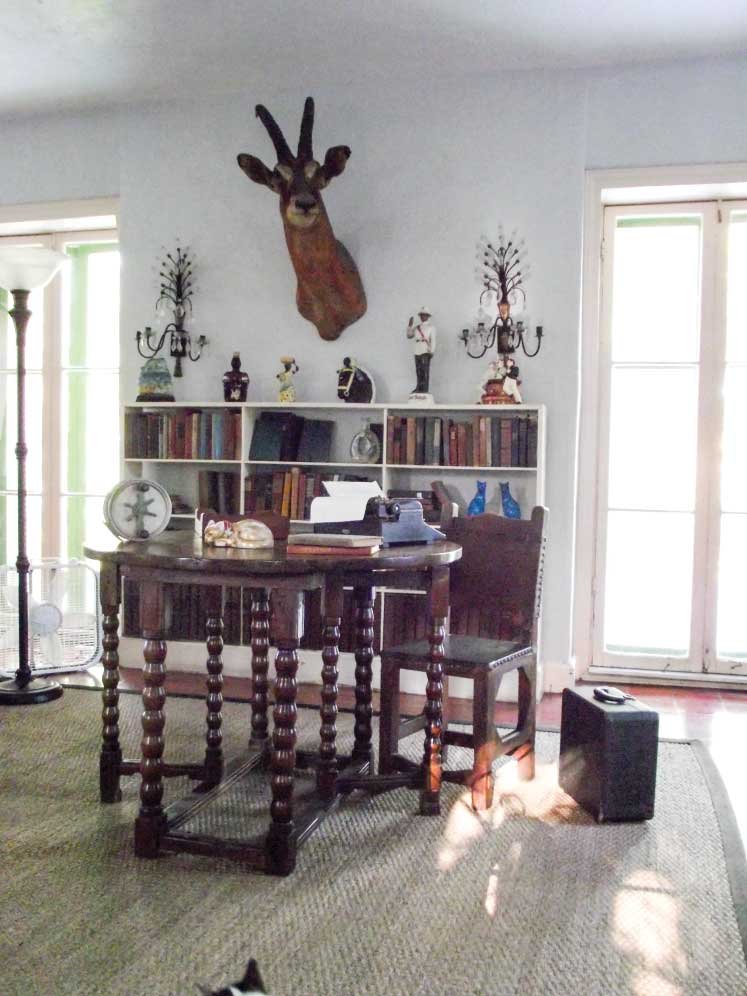 The tour of Hemingway’s Spanish Colonial home includes a look at Hemingway’s writing studio, overlooking the pool and gardens.

As beautiful as the gardens were, the highlight for me was seeing the desk where Hemingway wrote. Imagine him sitting there, musing over a word or phrase! Though I must admit, I was equally fascinated by the cats — literally four-dozen of them, most polydactyl and believed to be descendants of Hemingway’s own six-toed Snow White. While our guide cautioned us against sitting on beds or chairs, the felines stretched out everywhere, having made the museum their home. 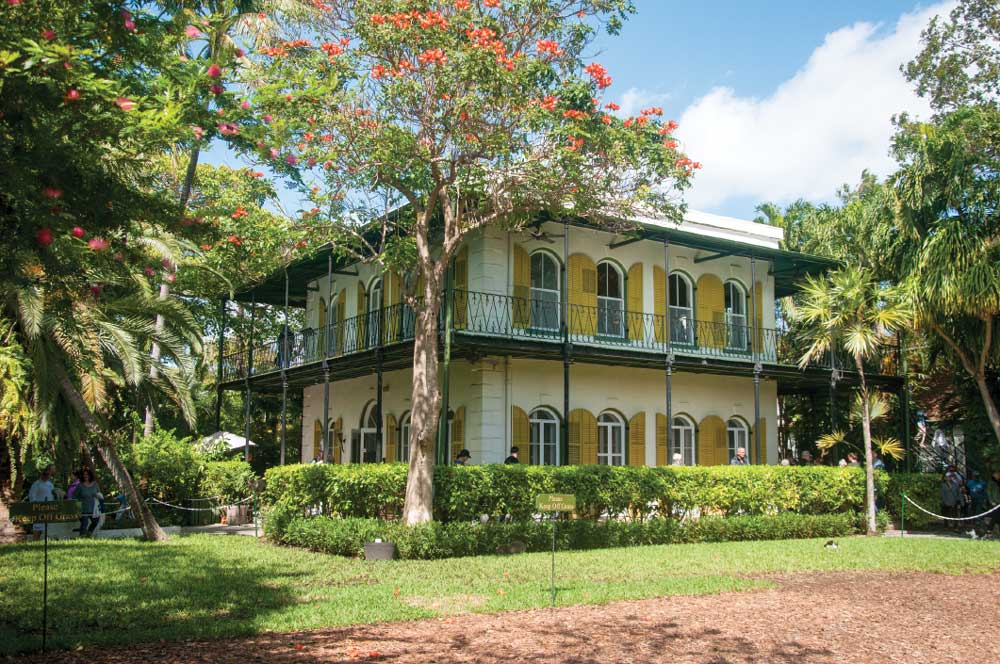 Hemingway’s Spanish Colonial home was built in 1851 and renovated by the author and his second wife in 1931.

Visitors to Hemingway’s Spanish Colonial home can tour the main home and check out the famous swimming pool and lovely garden area.

From here we biked past Blue Heaven, a restaurant on Thomas Street that served as a bar and boxing arena in the 1930s, where Hemingway was known to referee matches. Next came Duval Street and another famous watering hole, Sloppy Joe’s. Reportedly “Papa’s” favorite drinking spot, it is actually two locations — the bar opened by Hemingway’s friend “Sloppy Joe” Russell sat at 428 Greene Street until 1937, when it moved to Duval. The original site is now Captain Tony’s Saloon, an eclectic little bar with a tree growing through it that, according to legend, was a “hanging tree” where 17 people were executed. The building also once served as a morgue, making it a prime draw for ghost hunters.

The latter Sloppy Joe’s is a required tourist stop, known for its sizable portions, ambiance and live music. It also provides a front row seat to the eclectic parade of visitors sightseeing up and down Duval Street. There we did some “people watching” while dining on an appetizer of conch fritters. We followed this up with lunch at a tiny alley café, where we had a taste of Havana — a Cuban sandwich (with the pulled pork that is a Key West staple) followed by a piece of famous Key Lime pie. 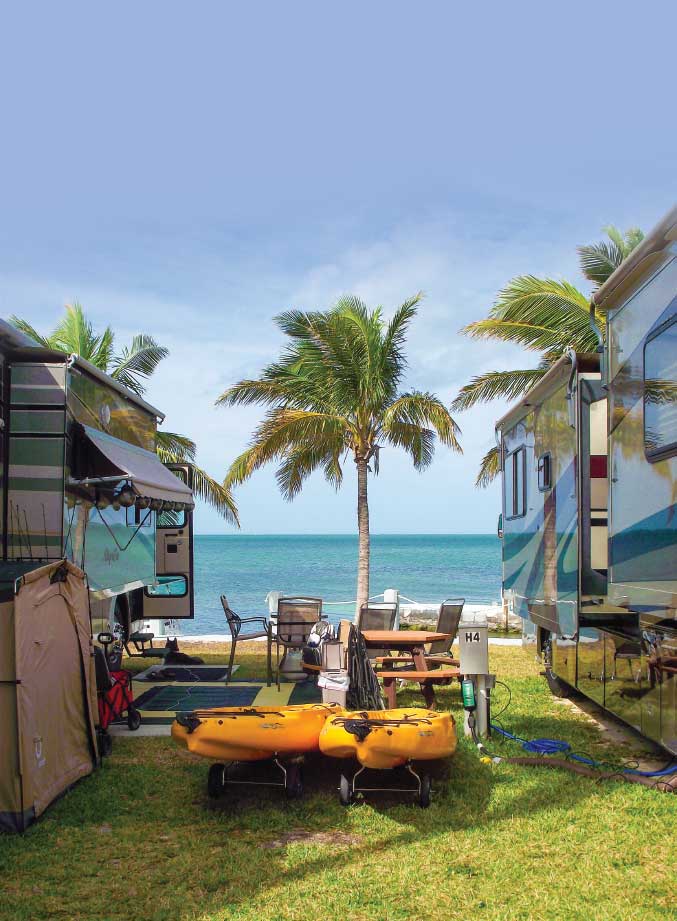 The Lower Keys offer dozens of campgrounds within an hour’s drive of Key West. Jolly Roger RV Resort (https://www.jrtp.com), rated 7.5/10*/8 by the Good Sam RV Travel & Savings Guide, offers more than 160 full-hookup sites across 11 acres. Plan and reserve early, as spots for the winter season fill up as much as a year in advance.

Our search for Hemingway continued in Mallory Square with a walk through the Key West Memorial Sculpture Garden. There I posed beside my idol, the famous writer’s bronze bust in the company of sculptures of other famous locals. From there we made our way to the Custom House Museum, stopping to listen to the Caribbean beat of one of the many street musicians that play in the open spaces around Mallory Square.

At the Key West Art and Historical Society Custom House Museum, which was getting a facelift when we visited, you can get a history lesson on the Florida Keys through more than 25,000 objects, from postcards, photo­graphs and paintings, to artifacts, textiles and ordnance, all part of the Museum’s permanent collection. There is a permanent Hemingway exhibit as well as changing exhibitions, like the one we saw on sculptor Stanley Papio, known as the Junkyard Rebel.

We couldn’t help but notice that many of the volunteers and workers we encountered in Old Town bore a striking resemblance to Hemingway himself. I mentioned this to a gentleman who bore the nametag George, and he laughed.

“If you think there are a lot of us now, come back in July,” he said.

It turns out that there is a Hemingway Look-Alike contest then, part of the annual Hemingway Days Festival that coincides with July 21st, the date of the author’s birth. While white-haired, bearded men come from across the country to participate, many of the contestants are local residents who aspire to be Papa’s double year-round. 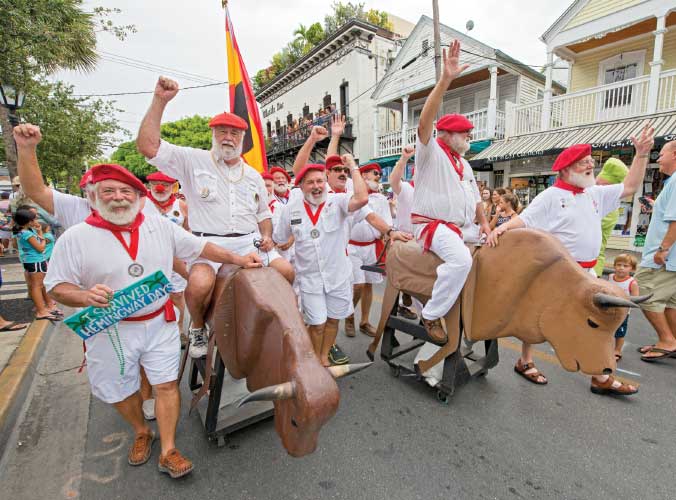 Hemingway and his fishing buddies were stranded at Fort Jefferson for 17 days on Garden Key, one of seven islands in Dry Tortugas National Park. Photos: Eric Eichenmuller

We hoped to end our visit by booking a ferry trip to Dry Tortugas National Park, a desert island home to Fort Jefferson. Hemingway and his fishing buddies were stranded there for 17 days during a tropical storm, and it seemed a great place to get in touch with the real Hemingway. But wind and waves did not cooperate, and that adventure had to be left for another time. Perhaps next July — I can’t wait to see a street full of Hemingways. 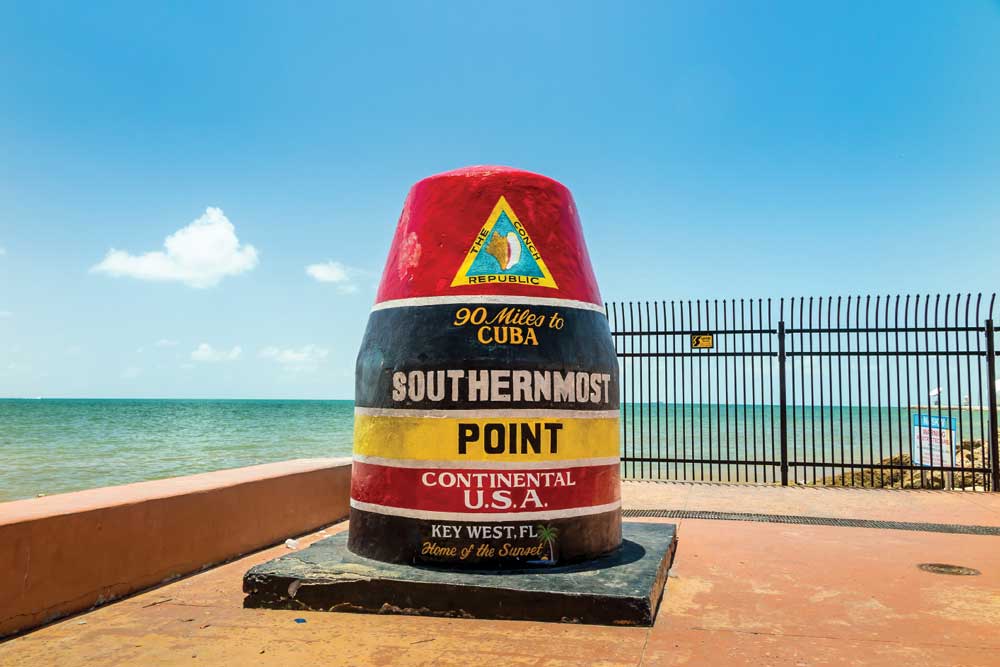 The southern most point of the continental United States in Key West, Florida is only 90 miles from Cuba.