RVing in Canada for the Winter

My wife, Sandy, and I have been snowbirding from Canada for the past 10 years to resorts in the U.S. Sun Belt – in our case, at locations in Arizona and California. Last year, we decided to spend the winter in Victoria, with the intention of answering the question: Is it possible to snowbird in Canada?

Two areas within Canada are popular snowbird destinations: Osoyoos in the interior of British Columbia, and Victoria on the southern tip of Vancouver Island. We chose Victoria, British Columbia’s capital, because of its cosmopolitan ambiance and proximity to the ocean. It’s also said to have the mildest climate in Canada.

Since Victoria is on an island, you need to take a ferry to get there with your motorhome. From mainland British Columbia, the quickest route is BC Ferries’ Tsawwassen-to-Sidney (Swartz Bay), dropping you off a half-hour north of Victoria. From Washington, the Black Ball Ferry Line runs from Port Angeles to downtown Victoria. The ferry offers service year-round (except for two weeks in January) and has a 14-foot vertical clearance for motorhomes. Sailing time is 90 minutes. Washington State Ferries run from Anacortes to Sidney once daily in the fall and spring, and twice daily in summer. The trip is approximately three hours long, and there is no service during winter. 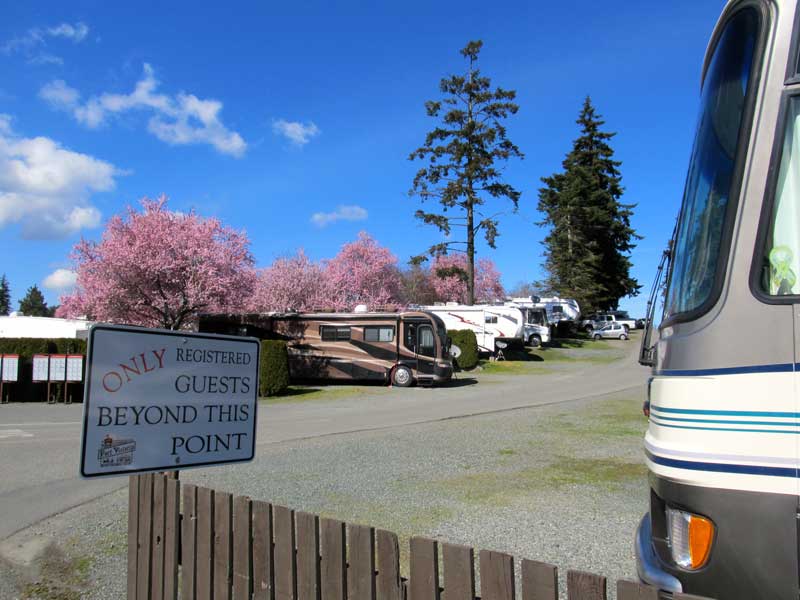 While a dozen or so RV campgrounds are available in the area, we prefer Fort Victoria RV Park, located about 20 minutes from downtown. When we contacted the park in mid-November, their 120 transient, full-service sites were nearly full. Fortunately, a friendly staff person was able to shuffle some later arrivals to accommodate us through April. More than half of our neighbors were from other provinces where below-freezing winter temperatures make RV living unbearable. Collectively, we might be considered a unique breed of snowbirds: those who escape winter’s wrath without migrating all the way to the Sun Belt!

Average temperatures in Victoria seldom get below freezing during the winter, and snow accumulation is rare. That said; the winter of 2016-17 was the coldest and snowiest in 20 years. Dampness was our primary concern, evidenced by moisture and mold buildup on our windows and walls. To solve this problem, we purchased a dehumidifier which, together with two small ceramic heaters and our electric fireplace, allowed us to be comfortably dry and warm throughout our stay.

Getting Acquainted With Victoria

Whenever we arrive in a new city, we take a bus tour to give us the lay of the land. We also stop by the local visitor center to find out about “must do” activities. 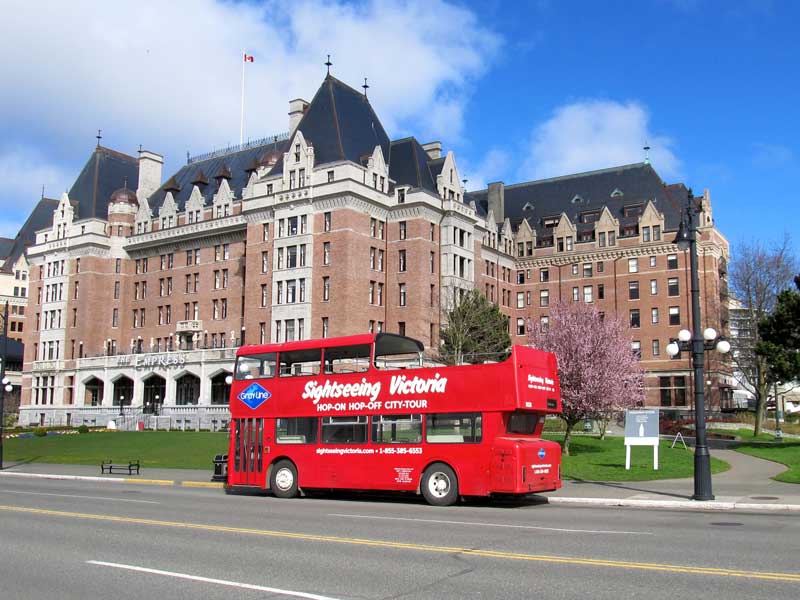 A tour bus is a great way to see Victoria.

For our tour, we chose Gray Line’s double-decker British-style bus. This 90-minute hop-on hop-off excursion provides an overview of the city’s major attractions, beginning at the iconic chÃ¢teau-style Fairmont Empress Hotel. From there, we meandered slowly through Chinatown, the oldest in Canada, and stopped briefly at Fisherman’s Wharf, Oak Bay Marina, Beacon Hill Park, Craigdarroch Castle and other historic or scenic locations. Running commentary provided a wealth of information about Victoria’s early days as a fur trading post and frontier town for gold seekers and coal miners.

Victoria has one of the most beautiful harbors in the world, with a well-protected marina and a walkway where buskers entertain to the delight of visitors and locals alike. In addition to our bus tour, we took a 45-minute boat excursion with Victoria Harbour Ferry. Our informative captain spoke about early uses of the harbor, including fishing, logging, shipbuilding, fur trading and even soap making. Once-fertile shorelines populated by First Nationers are now chockfull of plush hotels, colorful float homes, commercial piers and terminal buildings. Passengers disembarking from seaplanes, ferries and cruise ships can enjoy this delightful city by visiting waterfront attractions or by browsing through countless one-of-a-kind shops, boutiques and galleries in the downtown area. 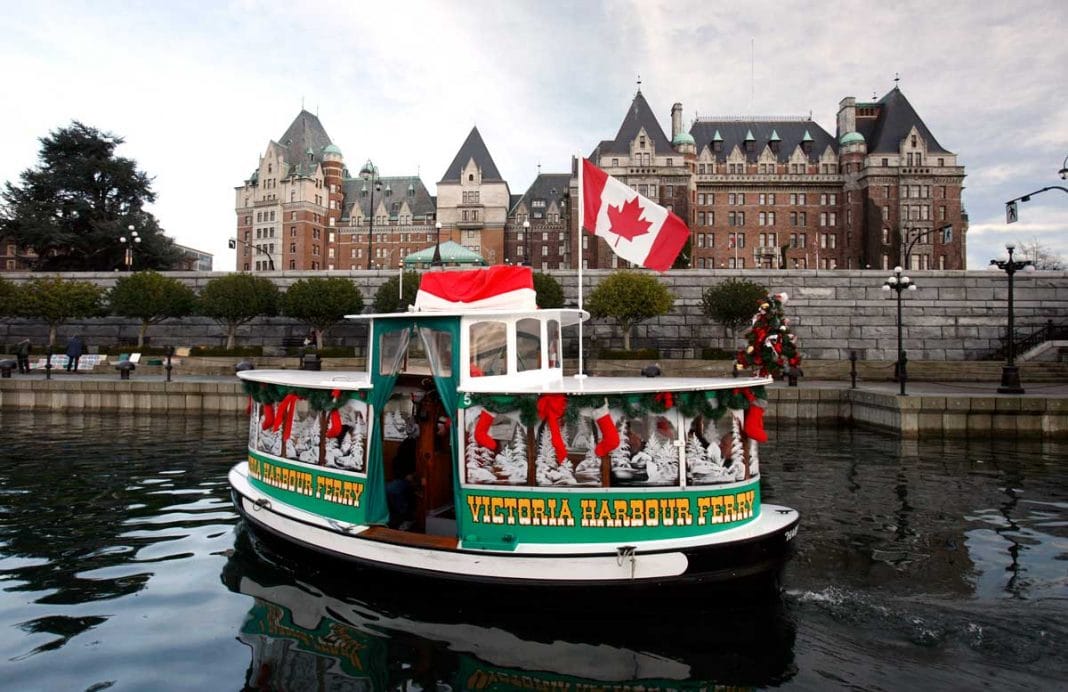 In the 1920s, the city became a popular retirement destination, so much so that Canadian writer Pierre Burton unkindly called Victoria “the place where old people go to visit their parents.” No longer! According to the 2016 Canadian census, less than 20 percent of Greater Victoria’s population of nearly 370,000 is made up of retired seniors, which increases slightly in winter due to the influx of snowbirds. (“Greater Victoria” includes 13 outlying municipalities, while the city itself has a relatively small population of 85,000.) 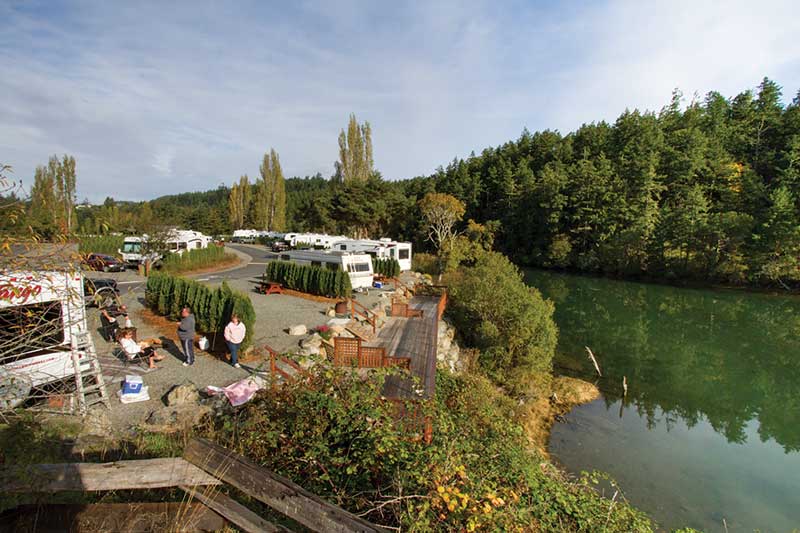 At the downtown visitor center, I learned that during winter, Victoria’s three most popular attractions are The Butchart Gardens, the Royal BC Museum and the Parliament Buildings.

American poet Ralph Waldo Emerson said, “The earth laughs in flowers.” Nowhere is that laughter more plentiful than at Victoria’s century-old Butchart (“Butch-art”) Gardens that delights more than a million visitors annually. In early spring, 55 acres of flowering bulbs – including tulips, daffodils and hyacinths – are showcased among colorful shrubs and trees, providing a kaleidoscope of colors. A self-guided tour allowed us to leisurely explore five separate gardens – the Indoor Spring Prelude, Japanese, Italian, Sunken and Mediterranean – each immaculately landscaped with an array of annuals, streams and fountains. Hard to miss is the tall chimney overlooking the Sunken Garden (remnants of a quarry) that provides a stoic reminder of the garden’s past as a cement factory. 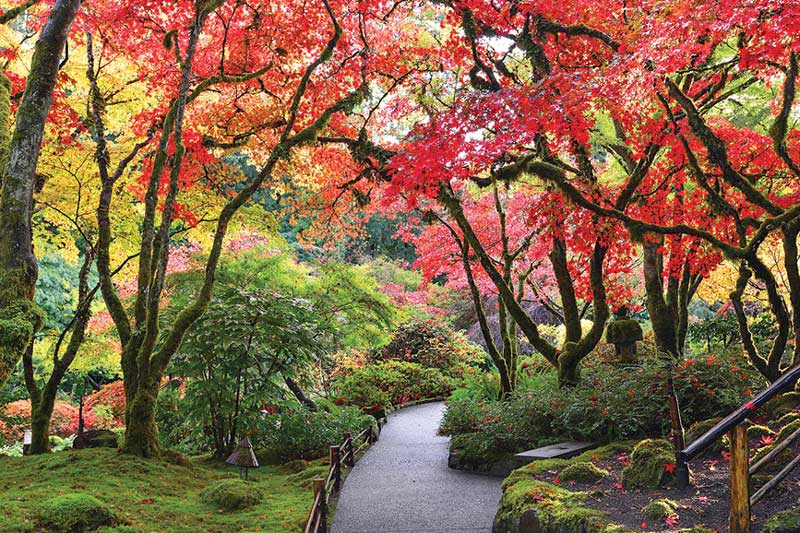 Snowbirds are doubly fortunate in being able to visit this National Historic Site during the winter holiday season. For five weeks, thousands of colorful lights and dozens of larger-than-life figurines representing “The 12 Days of Christmas” provide an awe-inspiring and magical experience. Our favorite was “The Fourth Day of Christmas,” represented by four calling birds … each with a cellphone! Lace up the ice skates and glide across the outdoor rink to the sound of seasonal music, or ride one of 30 hand-crafted animals on the indoor carousel. Finish up with a hot cocoa while listening to carolers.

Established in 1886, the multi-story Royal BC Museum was rated by TripAdvisor as the best of 15 historical and art galleries in Victoria. We spent a full day learning about the natural and human history of Victoria and British Columbia. A First Nations gallery presents artifacts and information about their cultures and ultimate conflicts with European settlers. A separate gallery illustrates how British Columbia was shaped by pioneers, evolving into the economic and political structures of the 21st century.

Another gallery, with expansive life-like dioramas, highlights the impact of nature over the years, from the Ice Age to the abundant forests and changing river deltas of present-day landscapes. The interactive exhibits are fun and educational.

During our visit, we saw a temporary exhibit, “Terry Fox: Running to the Heart of Canada.” Fox, who lost part of his right leg to bone cancer at the age of 18, intended to run across Canada to raise money for cancer research. In 1981, 21-year-old Fox dipped his prosthetic leg in the ocean at St. Johns, Newfoundland, commencing his “Marathon of Hope” run. He completed a marathon distance (26 miles) every day for 143 days while inspiring a nation with his courage, integrity and determination. Photographs, maps, videos and artifacts – such as his iconic Ford support van, prosthetic leg, worn out runners and his personal diary – capture a day-in-the-life of his run, his interactions with adoring fans and famous Canadians, and the heart-breaking end at Thunder Bay, Ontario, when cancer spread to his lungs. Although he died within a year, his legacy lives on in annual Terry Fox runs throughout the world, at last count raising more than $700 million in Canada for cancer research. To quote this true Canadian hero, “Dreams are made possible if you try.” 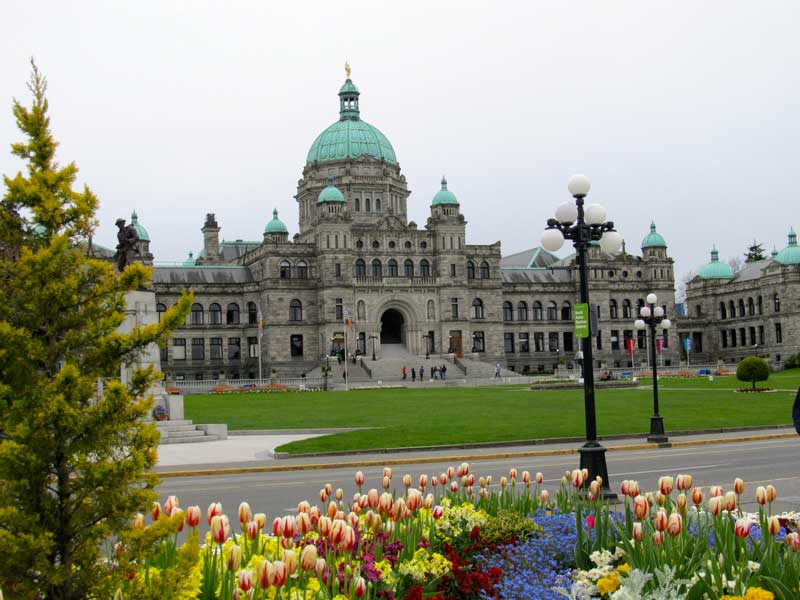 Directly across the street from the museum are the majestic parliament buildings, the seat of government in British Columbia since 1898. Guided tours provide visitors with details about the original construction and unique architectural features such as symbolic stained-glass windows, an octagonal copper dome, marble columns and hardwood panels. Our tour guide showed us the regally appointed Legislative Chamber, where elected officials meet to discuss proposed laws, budgets and issues that may impact their constituents. After our tour, we interacted with several video exhibits to learn more about famous Canadian politicians, entertainers and humanitarians.

Victoria has an endless variety of other activities for winter visitors. Whether it’s playing tennis, pickleball or curling – or just delighting in the entertainment and cultural scene – there is something here for every RVer. “Monday Magazine” lists daily activities, ranging from folk music and Beethoven concerts to craft shows and beer festivals. For foodies, there is no shortage of restaurants, more per capita than any other Canadian city, from casual pub fare to elegant five-star dining. And as might be expected in a British-inspired city, afternoon tea is oh-so-popular – many restaurants offer a variety of teas combined with gourmet pastries. 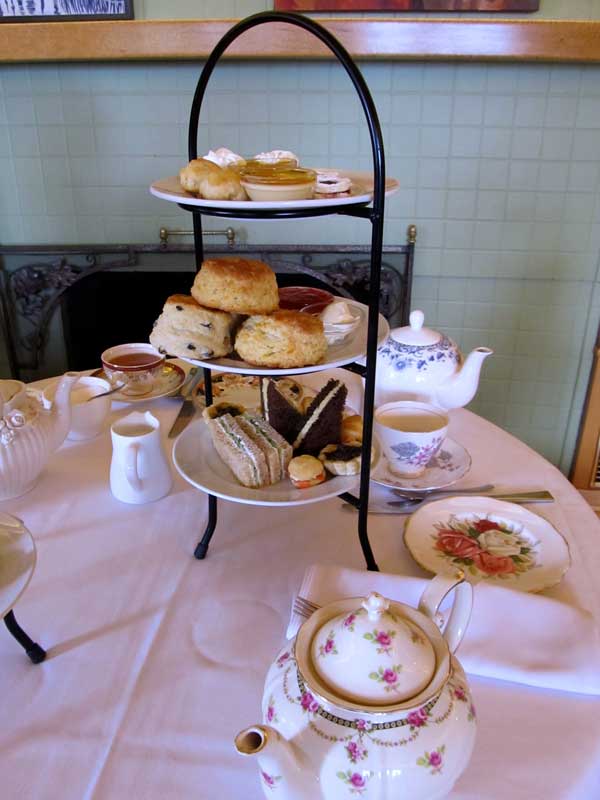 Tea and scones at Abkhazi Garden.

To sample this tradition, we visited The Teahouse at Abkhazi (Ab-kazi) Garden and devoured three tiers of delicate finger sandwiches, quiches and pastries, all in an intimate dining room overlooking a beautifully landscaped garden. A choice of exotic teas is served in fine china pots and cups; with advanced notice, their regular decadent menu offers gluten-free and vegetarian options. Victoria, because of its many charming, whimsical and lovingly tended gardens, is deservedly called the “City of Gardens.” Afternoon Tea at Abkhazi Garden provides a truly memorable experience for body and soul.

Returning to our question, would we consider staying in Canada a viable option to going south in the winter? We would indeed, at least in Victoria, given the abundance of activities available. And to our surprise and delight, we found the greenery, cool temperatures, and even the rain and snow a refreshing alternative to the barren desert landscapes and the hot, dry conditions that we typically encounter down south. 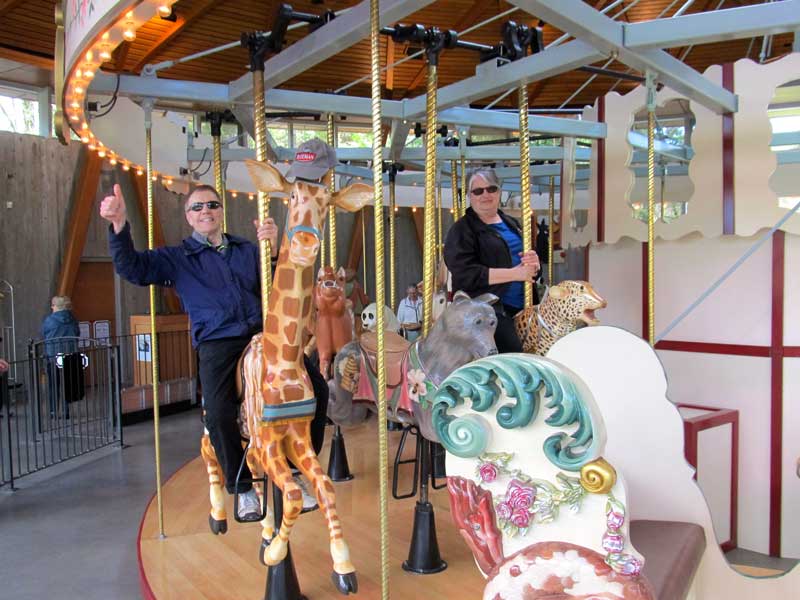 The author, Larry, and his wife, Sue.

Also, we enjoyed some activities that simply aren’t available down south, such as curling, dragon boating and making a snowman! Other nice touches included the presence of typically migratory birds – hummingbirds, robins and geese – and the springtime blossoming of cherry trees scattered throughout the city. On the practical side, our Canadian dollar was only worth about 70 cents U.S. this year, so we no doubt saved money by spending it in Canada. Conversely, one RVer from Montana commented that he was delighted with the purchasing power of the U.S. dollar. As he put it, “More bang for the buck!”

All things considered, snowbirding in Victoria was such a positive experience; we’re seriously considering hanging out with the nonmigrating flock again next winter!