RVing in Bella Coola, BC

While some may see this phrase as having negative connotations, I’m here to argue otherwise. Because I’ve been to places where the road ends, and I can tell you that, without fail, every end holds the promise of a new beginning.

Case in point: the small fishing village of Bella Coola. Located on the central coast of British Columbia where its namesake river empties into the Pacific Ocean, this town is the last outpost on Provincial Highway 20. But, as far as I’m concerned, it’s one of the first places RVers with an adventurous spirit ought to put on their list of dream destinations.

How to Get to Bella Coola, BC

From its snowcapped peaks and fresh air to its abundant wildlife and mild weather, the 50-mile-long Bella Coola Valley has any number of appealing qualities. The truth of the matter, though, is that its greatest strength — its remoteness — may also be its most notable weakness.

You see, Bella Coola isn’t one of those places you stumble upon by accident. It takes a fair bit of pluck to reach it, whether by land or sea.

Pristine alpine lakes and soaring mountain peaks are just a sample of the natural attractions that await at the end of the road or ferry route.

Getting to this lonely dot on the map involves following Highway 20 west for 283 miles from the town of Williams Lake, a trip that includes some stretches of rough pavement. To make things more interesting, the drive is capped off with tackling Heckman Pass — better known simply as “the Hill” — an 18-mile descent full of loose gravel, hairpin turns and steep drop-offs. 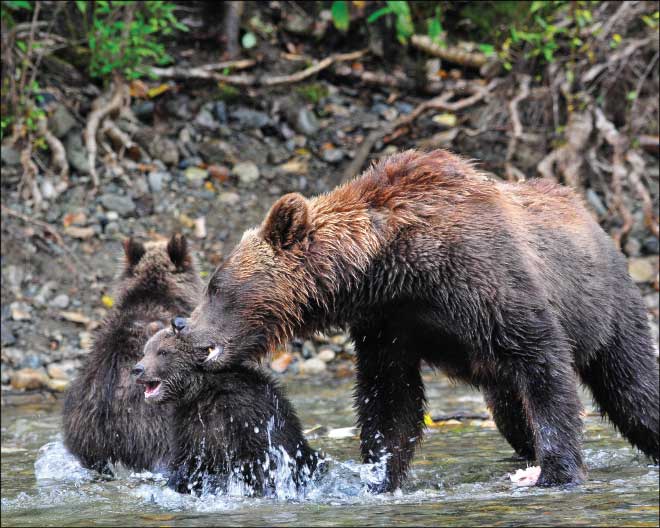 Grizzly bear sightings are not uncommon in the Bella Coola Valley.
photo by Michael Wigle

That said, the trip is entirely doable hauling a trailer with any well-maintained tow vehicle that can be shifted into lower gears. If you have a truck with four-wheel-drive or a diesel exhaust brake, you should be able to make the slow crawl downhill without breaking a sweat.

If that sounds a little too stressful, a ferry can transport you and your RV from Port Hardy on the northern tip of Vancouver Island to Bella Coola from mid-June through September. Either way, getting here is an adventure in itself.

Attractions in Bella Coola, BC

Once you’ve arrived at the valley floor, you’ll find your efforts have been handsomely rewarded by Bella Coola’s stunning scenery. The first and foremost attractions are British Columbia’s Coast Mountains. Their jagged summits soar to nearly 12,000 feet and include a Matterhorn look-alike and the aptly named Mount Stupendous. 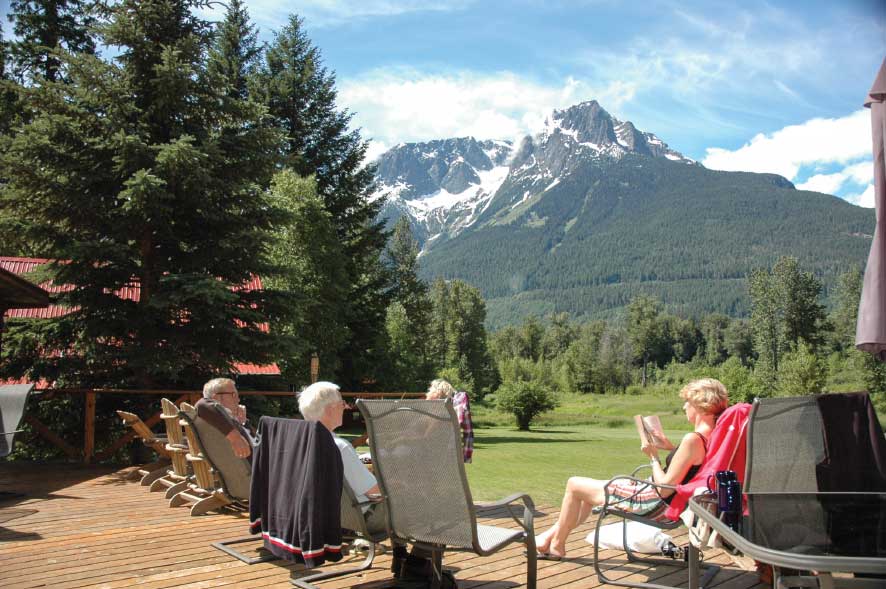 The downside of visiting the Bella Coola Valley? The setting can be so relaxing and the scenery so spectacular, you won’t want to leave.

In fact, nearly everywhere you turn, you’re surrounded by jaw-dropping scenery. Heading off into the still-wild backcountry by way of reasonably well-maintained unpaved forest service roads will add even more wonder as you stop to enjoy a picnic lunch amid views of dramatic Odegaard Falls and alpine ponds like Hammer Lake.

To top it all off, the Bella Coola Valley’s climate is relatively dry and sunny, thanks to its location 100 miles inland from the Pacific Ocean.

This valley has been home to the native Nuxalk people for thousands of years. Today, the Nuxalk continue producing their highly regarded traditional crafts, including ceremonial masks, totem poles, quilts, pottery and more, which you’ll find for sale in a number of local galleries and artists’ studios.

If you’re wondering where the small neighboring community of Hagensborg got its Nordic name, there’s a simple explanation. A century after Angus MacKenzie became the first white man to reach the Pacific by overland route in 1793, a dozen years before Lewis and Clark, a group of Norwegian homesteaders came to settle this part of the glacially cut valley because of its resemblance to their home country. 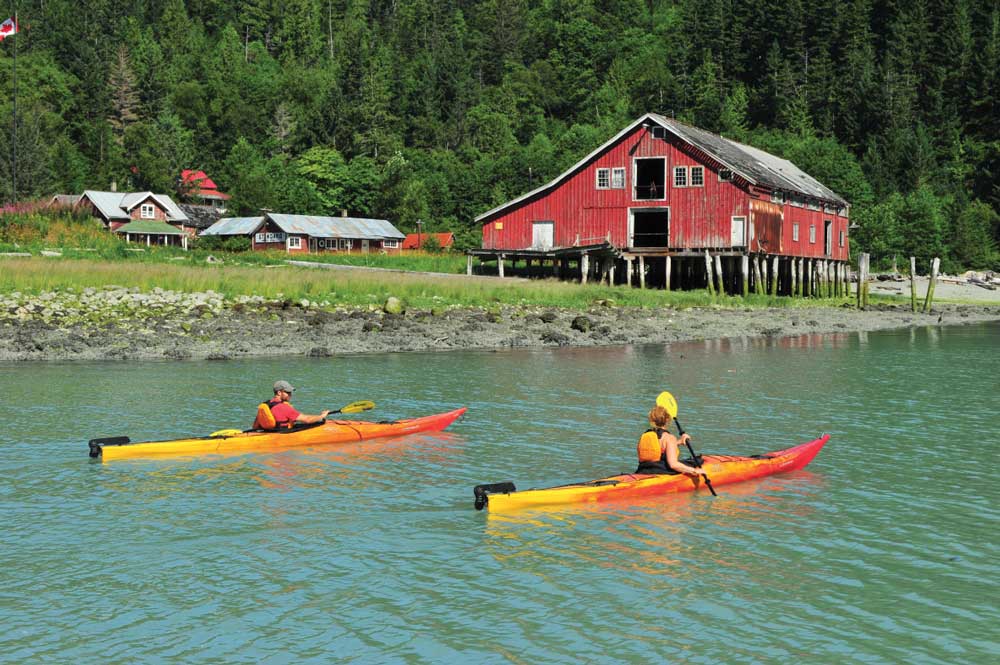 Paddling a sea kayaks past the Tallheo Cannery, one of the few remaining fishing canneries on British Columbia’s Northwest coast.

This hardworking, pioneer spirit also helps explain why Bella Coola is one of only three places on British Columbia’s central coast where the ocean is accessible by road. In 1953, locals got fed up with the government’s refusal to extend Highway 20 from Anahim Lake down the Hill to the town. So they scraped together $250, plenty of dynamite and heavy equipment, and cut their own road to the valley below.

Wildlife in Bella Coola, BC

Wildlife viewing is a prime attraction, as you might imagine from a town that is the jumping-off spot for the Great Bear Rainforest — at 25,000 square miles, it is one of largest swaths of unspoiled temperate rainforest in the world.

On our visit, we encountered a full-grown grizzly before we even made it to our campsite. Had we been here six weeks later when the salmon were running up the Bella Coola and its tributaries, we were told we’d have seen dozens of black and brown bears fattening themselves up for the long winter ahead. Bald eagles are an equally common sight. And, if you’re very lucky, you may even lay eyes on more elusive creatures that call this valley home including wolves, cougars and mountain goats.

One of the best ways to increase your chances of spotting and perhaps photographing all this wildlife is by arranging to go out with a local guide. Many of them use oar-powered drift boats to float quietly down the river, giving you a chance at getting up-close views without spooking the animals. 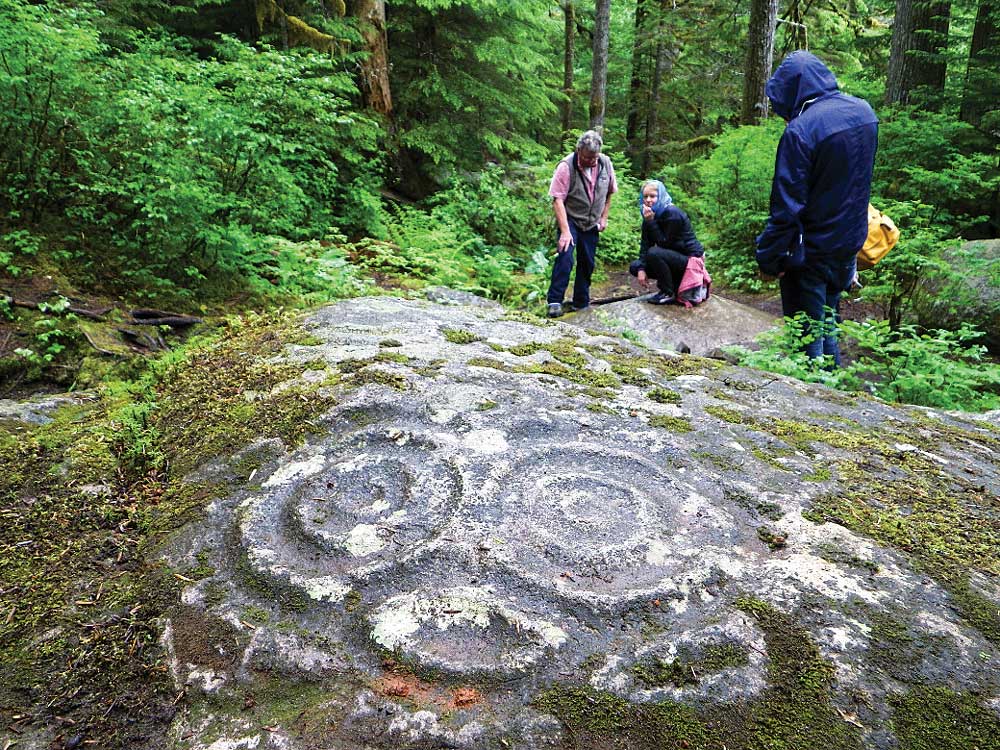 Hiking to the Thorsen Creek petroglyphs.

Other guide services offer tours by sea kayak where you can paddle to an old abandoned cannery or soak in picturesque natural hot springs. Scenic powerboat excursions take you further out into the waters of the Inside Passage where orca and humpback whales can often be spotted swimming along the wild and unpeopled North Bentinck Arm.

Fishing in Bella Coola, BC

For those who prefer their wildlife wriggling on the end of a line, Bella Coola’s streams and mountain lakes are filled with everything from pink salmon to rainbow trout. There’s even an outfitter who’ll give you the chance to snorkel with salmon, in case you want to reach out and touch your dinner.

At the literal end of the road, you’ll find Bella Coola’s public docks. The docks are home to a number of fishing guides that offer saltwater anglers a chance to catch their limit of halibut, lingcod, prawns and even Dungeness crabs.

If you prefer to commune with nature on land, the Bella Coola Valley and nearby Tweedsmuir South Provincial Park have miles of trails waiting to be explored. There are also outfitters who can do everything from setting you up with the gear you’ll need to guiding you through the vast wilderness that lies just beyond the campground. 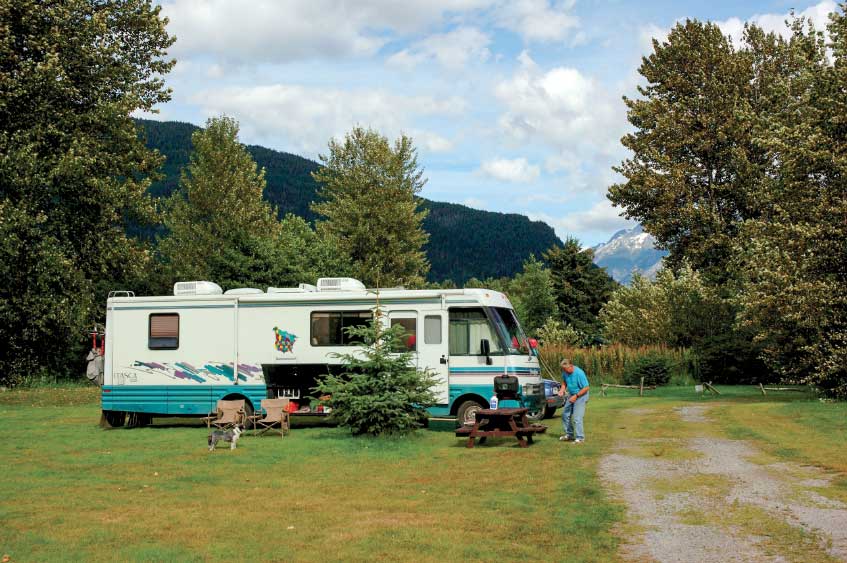 One of two commercial RV parks in the area, Rip Rap Camp has full hookups and killer views.
photo by Steve Harkies

To see more of the area in less time, consider taking to the air aboard a small flight-seeing plane. Heli-hiking — being dropped off by helicopter on, say, a remote mountaintop for a day hike — is also a possibility.

Despite all this natural beauty, visiting the Bella Coola Valley is clearly not a trip for everyone. But for RVers with a strong curiosity and sense of adventure, the end of this road may be just the start of many way-off-the-beaten-path experiences to come. 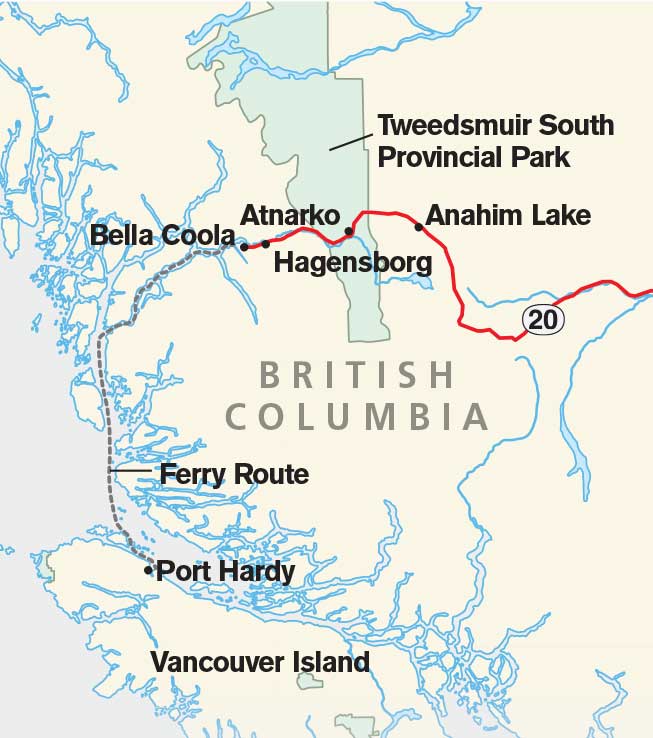 Bella Coola is a scenic 620-mile drive north of Vancouver, British Columbia, by way of highways 97 and 20. A packed-dirt road, Highway 20 crosses Tweedsmuir Provincial Park and summits Heckman Pass. Despite switchbacks and steep grades, the pass, known as “the Hill,” is considered drivable by RVs of all sizes, though downshifting is essential. If you go, don’t miss the drive (sans trailer) to Purgatory Lookout on the unpaved Nusatsum Forest Service Road. 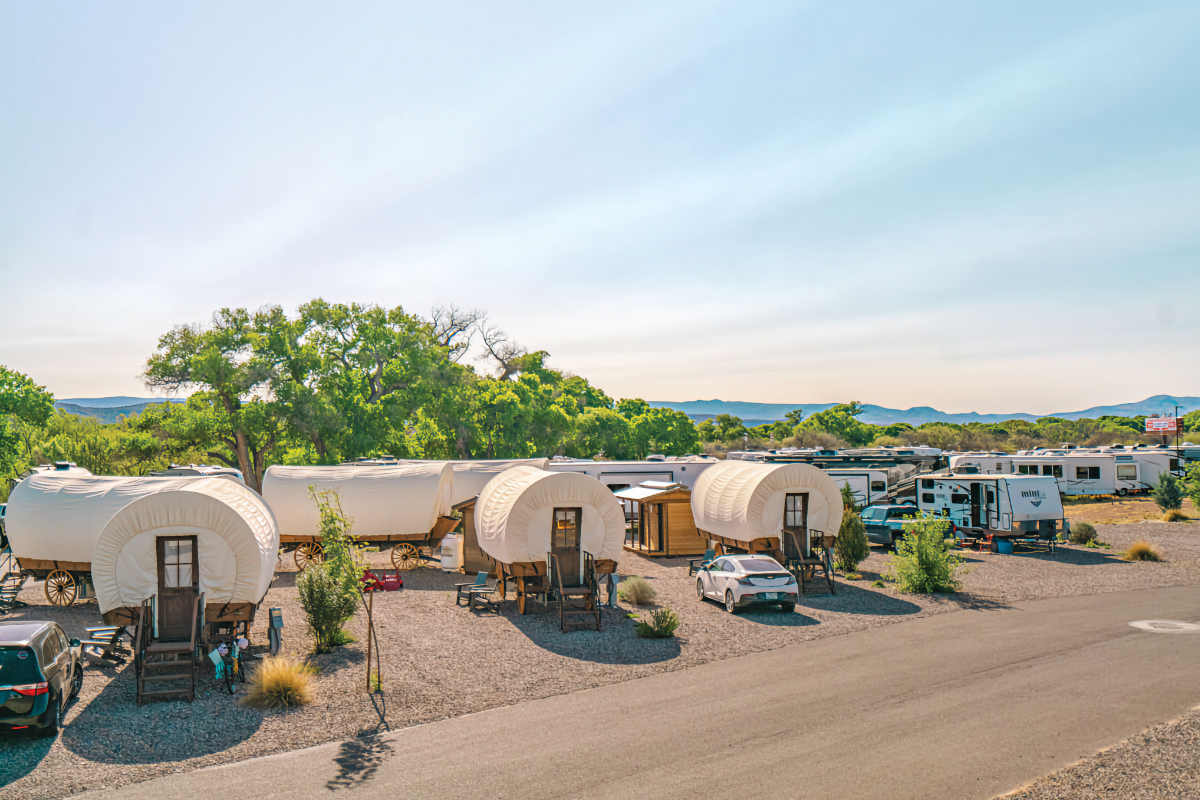