The hummingbird vibrated on the palm of my right hand, its heart revving like a miniature motor in overdrive. It felt warm. Then, without warning, it burst into the air and was gone. When my own heart finally calmed down, I laughed with delight. What a thrill to actually hold a hummingbird!

My husband and I were at the Potlatch Conservation Education Center (PCEC) in Dale Bumpers White River National Wildlife Refuge in Arkansas, a premeditated pit stop en route to Little Rock. During the mid-20th century, the 72-acre PCEC property was a private fishing retreat for executives of Lion Oil Company. After changing hands a couple of times, in 1999, Potlatch, a forest-products firm, gave the property jointly to the U.S. Fish and Wildlife Service, the Arkansas Game and Fish Foundation and the Arkansas Game and Fish Commission — with a catch. It needed to be used for conservation education, otherwise Potlatch would take it back.

“Who knows what deals were made here when limos were coming and going,” speculated Wil Hafner, the education-program specialist who greeted us. “Celebrities, too. John Wayne stayed here!” 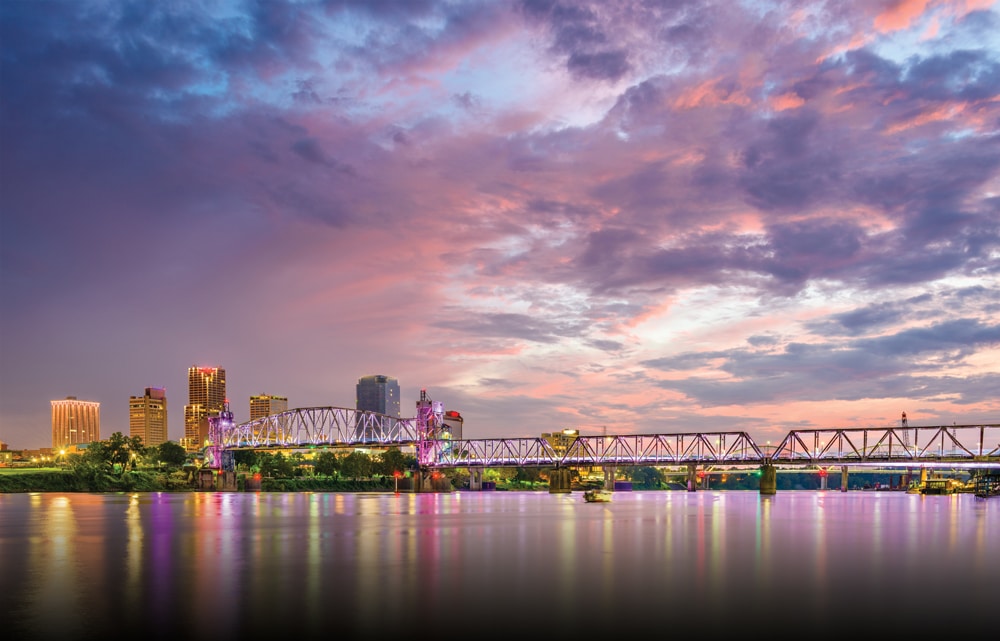 One of the many historic railroad bridges, now for pedestrians, that span the Arkansas River in Little Rock.
PHOTOS: LISA BALLARD

We were not at Potlatch to hobnob with the rich and famous. Avid birders, our interest was in one of the center’s educational programs, banding hummingbirds. We headed to the facility’s classroom, which had a couple dozen hummingbird feeders hanging from the back of the building and nearby trees. Curiously, a few feeders were inside an elevated cage. Hundreds of ruby-throated hummingbirds buzzed here and there, sipping the sweet water from the feeders then zipping into the woods a few feet away.

“Hummingbirds have a very high metabolic rate,” explained Tana Beasley, the only master hummingbird bander in Arkansas, as we settled into our seats. “They eat their weight in nectar every day. They also need the human equivalent of 150 pounds of protein every day, which they get from bugs they catch in the air. Fruit flies are their favorite. If someone says, ‘You eat like a hummingbird,’ that’s not a compliment.”

On Beasley’s cue, Hafner snaked his hand inside the cage, gently catching a hummingbird and depositing it in a mesh sack. Beasley removed the bird from the sack using a women’s nylon ped, a stocking that just covers the foot. The ped worked like a hood on a hawk, calming the little avian, which allowed Beasley to handle it without hurting it.

First, she measured and weighed it. She also checked to see if the female bird carried an egg by gently blowing apart the feathers on its belly with a straw. Then she took a tiny band, the circumference of an upholstery needle, and bent it around the bird’s leg.

“Who wants to release it?” asked Beasley. I immediately volunteered. What a thrill! 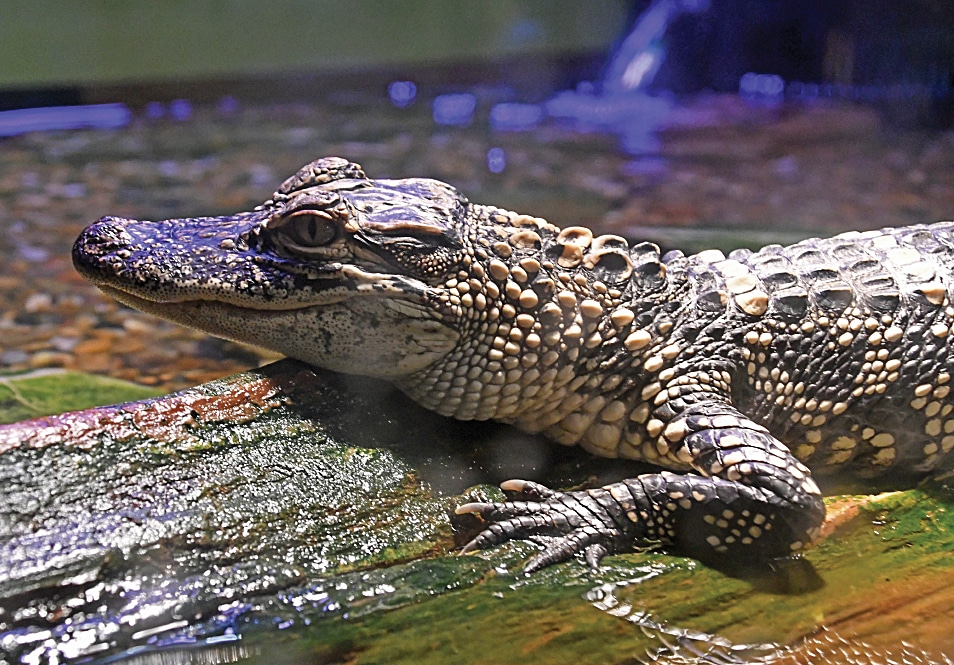 An alligator inside the Central Arkansas Nature Center in Riverfront Park “smiles” for visitors’ cameras.

From Potlatch, we drove to Little Rock, the capital and our primary destination. Always on the lookout for things to do outdoors, we immediately discovered Riverfront Park, along the bank of the Arkansas River, which flows through the heart of the city. The park was a mecca for walkers, joggers, scooters and bicyclists. It was one of the nicest urban parks we’ve ever seen. 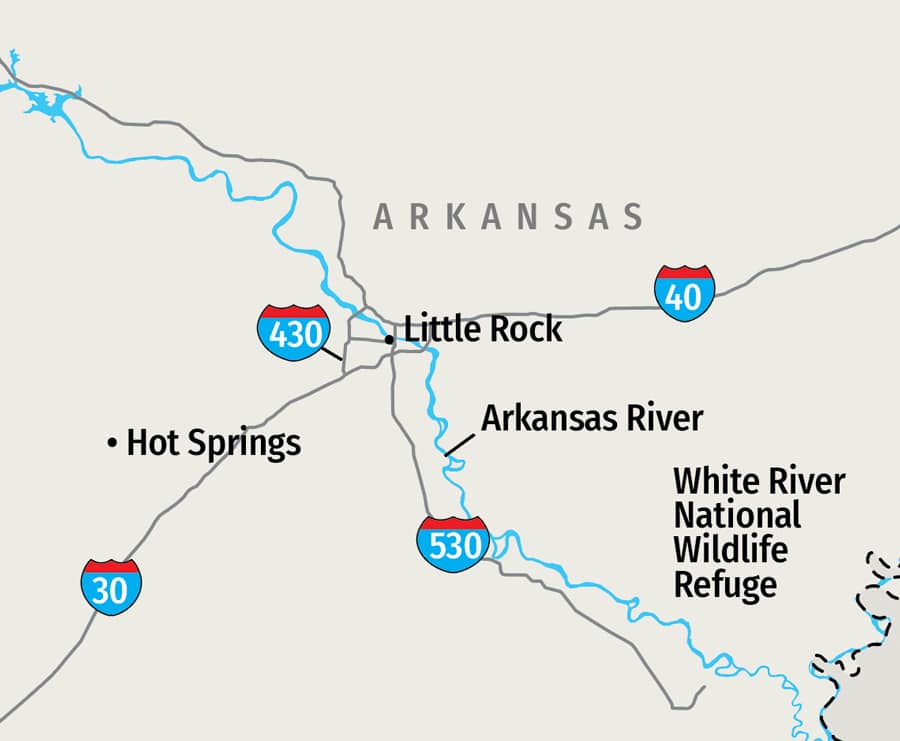 In addition to a number of play areas for kids and picnic areas, there were several miles of bike paths and places for public gatherings. It also contained a nature center showcasing Arkansas’ wildlife and fish, a pavilion that retold precolonial times along the river and a whimsical sculpture garden. Several former railroad bridges, now pedestrian walkways, connected Riverfront Park to the opposite shore and another bike path. At one point, we walked along the Medical Mile, a 1,300-foot section of the bike path with 3D murals designed to teach people how to live healthier lifestyles.

As we wandered through the many nooks and niches of the park, I began to wonder about the name of the city, Little Rock. Where was the rock?

In 1722, Jean-Baptiste Bénard de la Harpe, a French explorer, led 25 men up the Arkansas River from its mouth at the Mississippi River. Along the way, he noted the first outcropping of rock along the riverbank, which he dubbed La Petite Roche, (the little rock). The city of Little Rock eventually grew up around La Petite Roche. A quick Google search on my phone revealed that the city’s namesake rock was preserved in Riverfront Park by Junction Bridge, one of the former railroad bridges.

It took three tries and numerous inquiries to find it — or them. As it turned out, La Petite Roche was a pile of nondescript boulders. Even the desk clerk at the William J. Clinton Presidential Center and Park, a Little Rock native, didn’t know where the rockpile resided, perhaps because it was so innocuous. And not all of the original outcropping remained. Some of it was removed to make room for the bridge in 1884. 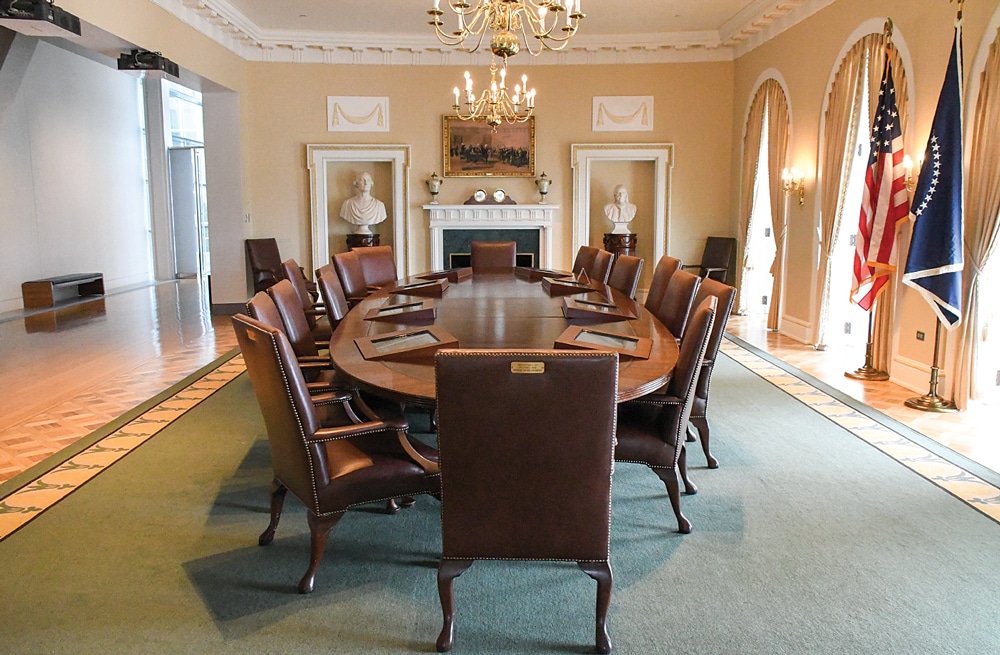 The Clinton Presidential Center is a must-see in Little Rock, regardless of one’s political leanings, for the historical records preserved there. Prior to becoming the 42nd president of the United States, Bill Clinton was governor of Arkansas. He and Hillary lived in Little Rock, which is why his presidential library is located there.

Since the mid-20th century, after a president leaves the Oval Office, a presidential library is traditionally created in his honor. It’s a museum preserving presidential documents and memorabilia related to his term(s) in office and personal history. It aims to educate the public about a particular president’s challenges and triumphs while giving a peek into White House life during that era.

The Clinton Center was a showcase of all these things, including a re-creation of the Oval Office as it looked during Clinton’s administration and how a dining-room table would have been set at the White House during a state visit. Several of Clinton’s saxophones were on display, along with numerous opulent gifts from visiting heads of state. The site also features an outdoor wetlands beside the Arkansas River with a 1,600-foot boardwalk through it. 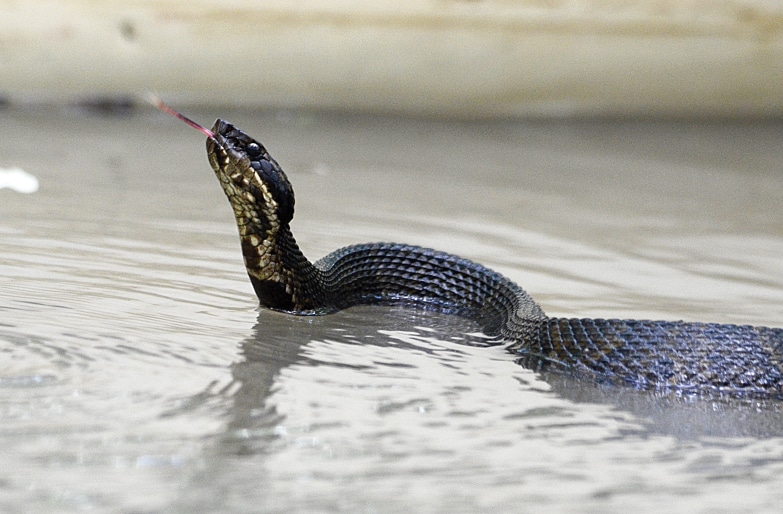 The wetlands by the presidential library give just a small taste of Arkansas’ aquatic habitats. The next day, we went kayaking on the Bayou DeView Water Trail, about an hour’s drive from Little Rock.

Bayou DeView, in the Cache River National Wildlife Refuge, was a flooded cypress and tupelo woodland. In 2009, it became the focus of the conservation and birding communities when the supposedly extinct ivory-billed woodpecker was purportedly spotted there. The existence of the woodpecker has never been substantiated.

There were other woodpeckers, though, which we could hear tapping here and there as our kayaks headed deeper and deeper into the forest. The trees towered above us like buttressed pillars. Green light tinged the muggy air, filtering down from the impenetrable canopy. A cacophony of songbirds serenaded us from unseen perches. The place felt prehistoric, like a pterodactyl might swoop down at any moment.

I spotted a fishing spider, the size of my hand, clinging to a tree trunk while hugging its prey to death. A few minutes later, a cottonmouth snake swam up to my boat. Normally, I would have been afraid of venomous snakes and large, hairy spiders, but on the bayou, they seemed simply part of the forest.

After padding several miles in the flooded timber, we came to our turnaround point, Stab Lake, so named because it’s long and narrow like a bayonet. As our paddles swished rhythmically left and right on our return journey to the put-in, I thought about Arkansas’ nickname, the Natural State. Arkansas is indeed an outdoorsy place that’s steeped in history. We spent only a couple of days there, but one could easily spend a couple of weeks.

Eight Outdoorsy Things to Do In Arkansas

Arkansas is a birder’s nirvana, particularly during spring and fall migration periods. More than 400 species of birds have been documented in the state. 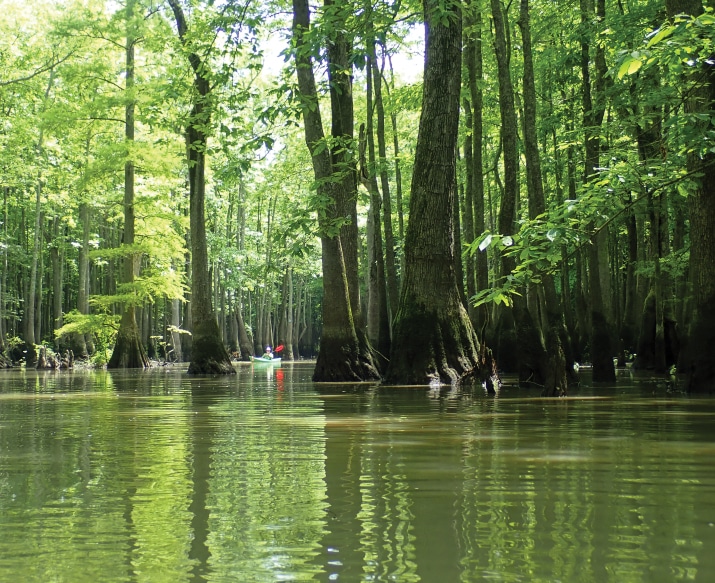 Towering trees of the Bayou DeView, a protected bottomland forest, dwarf a paddler on the bayou’s popular water trail.

The Buffalo National River is the first designated national river in the United States. This naturally flowing 135-mile waterway is bounded by 95,000 acres of public land and is a mecca for anglers, canoeists and wildlife watchers. Elk were successfully reintroduced to Arkansas in the 1980s and can be spotted in the fields by the river.

Mount Magazine, home of the International Butterfly Festival
each June, and Rich Mountain attract 90 species of butterflies, which migrate annually through the region.

Soak in a natural thermal bath

Hot Springs National Park is a must-visit for park-hoppers. Babe Ruth and Al Capone are among the many people over the past century who have soaked in the natural hot springs, which are known for their healing properties. It’s also the only national park with its own craft brewery. The beer is made from the park’s spring water. 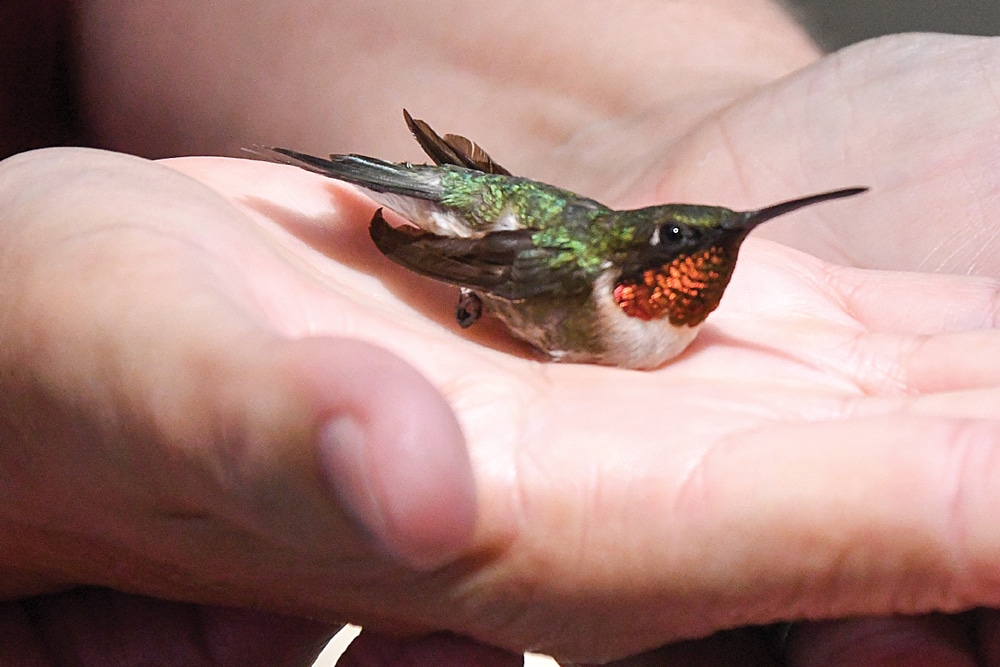 A recently banded hummingbird at the Potlatch Conservation Education Center pauses briefly before taking to the air.

Bass anglers love to toss their lures into Lake Ouachita, site of the bass fishing world championships. It’s one of many family-friendly boating lakes in the state.
Mountain bike. Five trails in Arkansas are designated as Epics by the International Mountain Biking Association (IMBA). IMBA also has declared Bentonville, Fayetteville and Hot Springs as Ride Centers for mountain and road cyclists.

Arkansas is on the Mississippi flyway and a popular spot for duck hunters. The waterfowl season begins in mid-November and runs through late January. For specific dates, bag limits per species, hunting licenses and other info, contact the Arkansas Game and Fish Commission (www.agfc.com).

Located in the north-central part of the state, the Ozark Mountains are heavily forested but filled with interesting rock formations and cascades, each a delightful destination for hikers.

What to Know Before You RV Camp in Arkansas

Stay hydrated. During the summer, Arkansas weather is hot and humid. Bring plenty of water or other beverages for all outdoor activities.

Wear sun protection, especially if you’re on the water!

Beware of snakes. Arkansas is home to a number of venomous snakes, including copperheads, cottonmouths, rattlesnakes and coral snakes. Give them a wide berth. Most try to retreat from humans and will bite only if cornered. Your odds of getting in a car accident or hit by lightning are higher than getting a snake bite.

Time your travel. Peak season is May to November, though summertime is very hot.
October and November are particularly busy with leaf-peepers and many festivals. If you love flowers, March and April are prime time for garden tours.

Use insect repellent. There are many biting bugs in Arkansas’ backcountry and front country.

Johnny Cash was born in Arkansas. You can learn about this mega-star’s early life at his boyhood home in Dyess. Other nationally renowned musicians from Arkansas include rocker Ronnie Hawkins of the Hawks; Patsy Montana, whose song “I Want to Be a Cowboy’s Sweetheart” was the first million-selling single by a female country artist; and legendary guitarist, singer and songwriter Glen Campbell.

Did you also know that Crater of Diamonds, located near Murfreesboro, is the country’s only producing diamond mine? Gem-seekers can search for diamonds at their volcanic source. 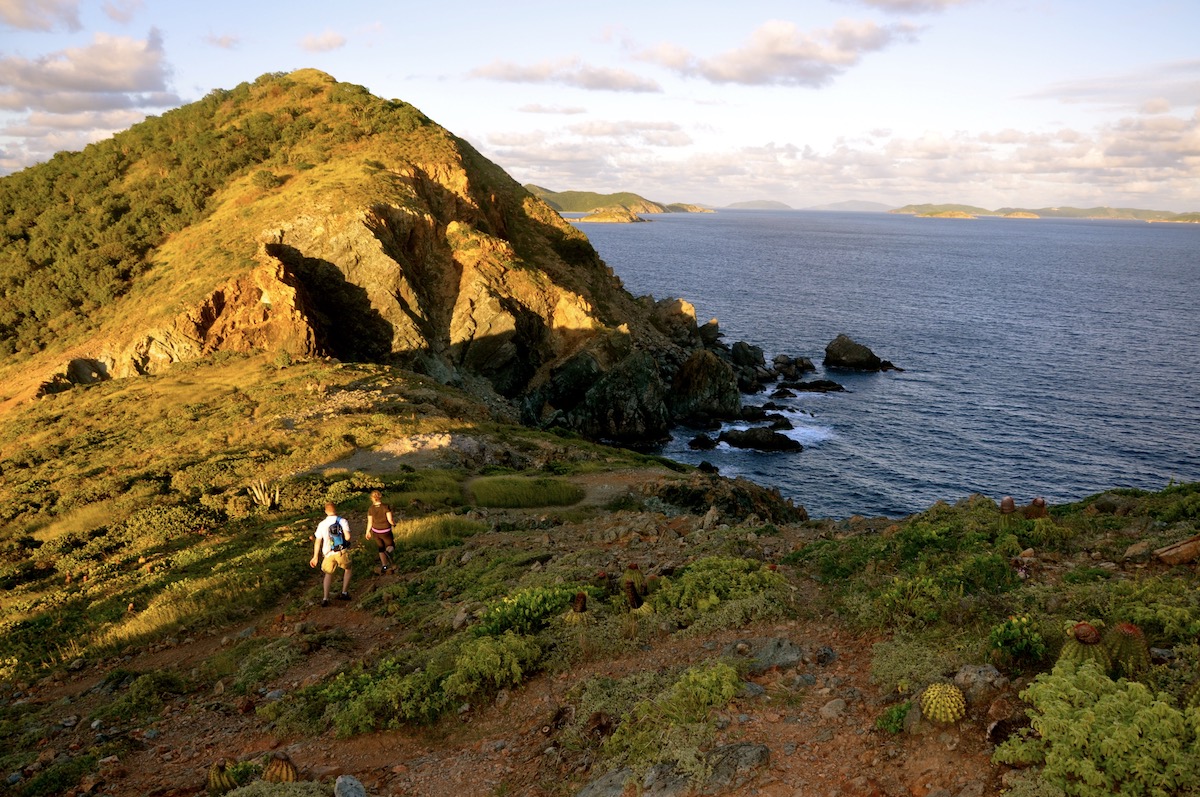 8 National Parks You Absolutely Can’t Visit in an RV

10 Great Destinations to Enjoy the Colors of Fall