Roadtripping through Vermont and New Hampshire

When I began planning our first visit to Vermont and New Hampshire, I heard the same thing from everyone who’d ever set foot in either state: “It’s beautiful; you’ll love it!” Things the area is famous for — picturesque scenery, cheese and maple syrup — exceeded expectations, and we found much more to put smiles on our faces. 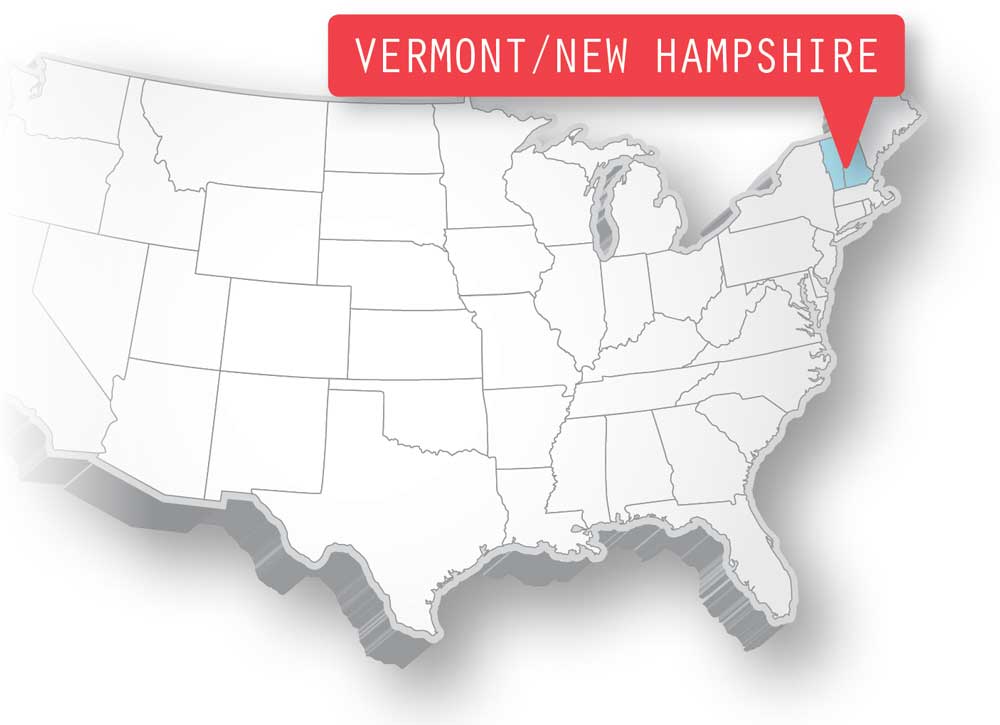 One look at the map and you can easily see why Vermont and New Hampshire are often referred to as “Twin States.” But, the two are actually quite different and each offers their own appeal. In his poem, “New Hampshire,” Robert Frost opined: “She’s one of the two best states in the Union,” before adding, “Vermont’s the other.”

Lone Pine Campsites in Colchester, Vermont, was our home base for the first four nights. We chose it for its proximity to Lake Champlain and Burlington, Vermont.

In 1972, Webb descendants formed a nonprofit to share Shelburne Farms with the public. It is now a 1,440-acre working farm with a focus on educating for a sustainable future. It offers programs year-round, tailored to educators, schools, families, children and adults.

To find out more, we signed up for the 90-minute open-air wagon Property Tour. When we turned the corner, an impressive building came into view. I thought, “Nice house!” Turns out we were looking at the Farm Barn. It’s five stories high with a 2-acre courtyard. Today it houses the education center, administration offices and the cheesemaking facility. Not only did we get to sample cheeses, we got to watch cheddaring, a process unique to cheddar. Semi-firm packs of curds are stacked on top of each other to squeeze out the whey. 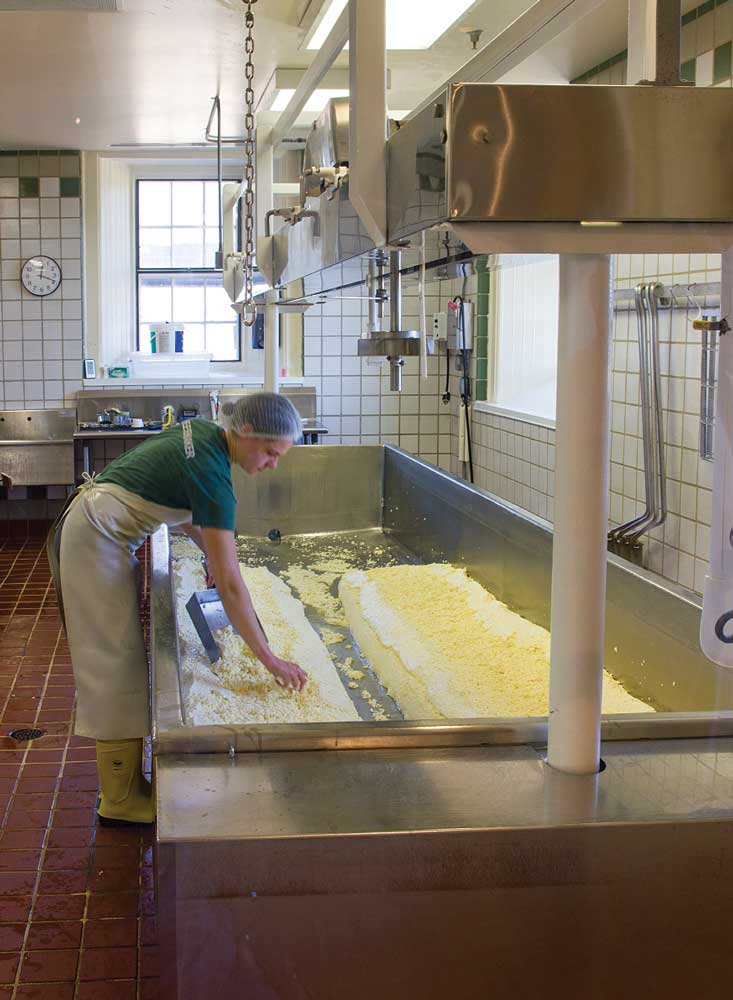 At Shelburne Farms, visitors can watch cheddaring, the process unique to cheddar when semi-firm packs of curds are stacked on top of each other to squeeze out the whey.

The tour included a stop at the 19th-century country home of the Webbs, which is now the Inn at Shelburne Farms. We were led through a few rooms on the main level, then explored the formal gardens overlooking Lake Champlain.

A few miles away, the story continues at the Shelburne Museum. Electra Havemeyer Webb, daughter-in-law of William Seward and Lila Vanderbilt Webb, founded Shelburne Museum in 1947 as a place to preserve her father-in-law’s horse-drawn carriages. This soon grew into a “collection of collections,” with items as diverse as American folk art, miniature dioramas, duck decoys and straight razors. The museum has 39 structures on 45 acres.

The 220-foot steamboat Ticonderoga was moved from Lake Champlain to the Shelburne Museum grounds.
Photos: Mary and Jim Zalmanek

Mrs. Webb searched for historic buildings suitable to house her collections. She relocated houses, barns, a covered bridge and the 220-foot steamboat Ticonderoga to the museum grounds. After providing passenger and freight service on Lake Champlain for 44 years, Ticonderoga was moved 2 miles inland. In 1955, a double railway system was built to haul this 900-ton vessel through forests and fields to its new home.

On our drive through Shelburne Village, we noticed fashionably dressed scarecrows all over town. We stopped to snap some photos of these “Leaf People.” Since we were next to the Shelburne General Store, we went in to browse. Much of the merchandise made me laugh, especially the dishtowel that read, “Sweet dreams are made of cheese, who am I to dis a brie.”

The next day we took a scenic narrated cruise on Lake Champlain aboard the Spirit of Ethan Allen. The Green Mountains of Vermont are to the east, and the Adirondack Mountains of New York are to the west. The boat cruised by the Shelburne Marina, where the Ticonderoga steamboat was built at the Shelburne Shipyard in 1906. We learned about three notable characters in the area’s history: Samuel de Champlain, Ethan Allen and “Champ.” Samuel de Champlain was a 17th-century French explorer and the first European to map and describe the lake. Ethan Allen was an American Revolutionary War hero and a champion of statehood for Vermont, although he died two years before it became a state. 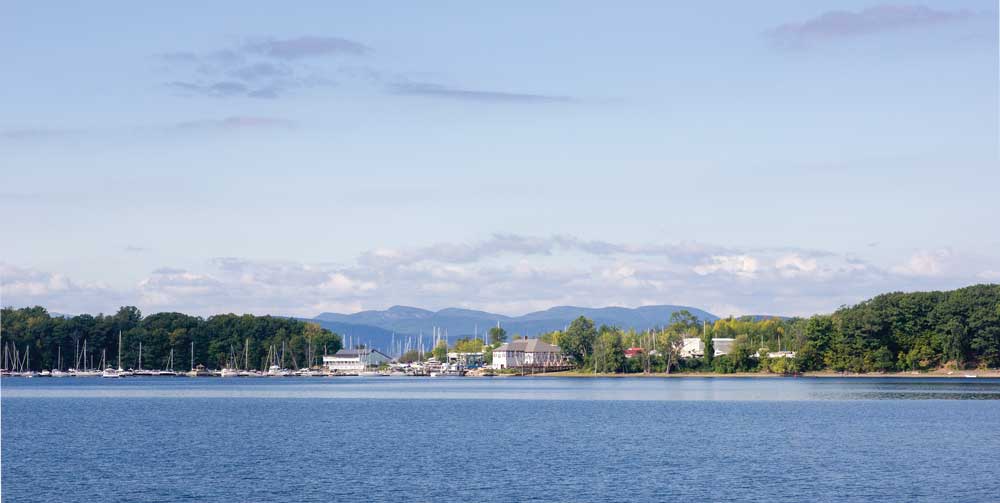 On the Spirit of Ethan Allen cruise, the boat passes by the Shelburne Marina.

“Champ,” the fabled serpent-like Lake Champlain monster, has been spotted by hundreds of people, including Samuel de Champlain in 1609 and a boatload of passengers on the Ticonderoga in 1945.

From the dock, it was a short walk to the Church Street Marketplace in downtown Burlington. The open-air pedestrian mall has more than 100 shops and restaurants. In an alleyway, we examined the 124-foot-long mural entitled “Everyone Loves a Parade.” The parade, led by Samuel de Champlain, includes notable Vermont residents from the past 400 years such as President Calvin Coolidge, Ben & Jerry’s founders Ben Cohen and Jerry Greenfield, Maria von Trapp and Norman Rockwell.

My favorite way to fall in love with a place is from the seat of a bicycle. From that vantage point, I’m surrounded by happy people in scenic surroundings. That seemed to be especially true on the Island Line Trail. From the parking lot in Colchester Park, we followed a tree-lined path to the former railway track that crosses Lake Champlain. A bike ferry runs every day in the summer, and Friday, Saturday and Sunday in the fall, to take people across “The Cut,” an opening in the causeway for boat traffic. Since we were there on a Tuesday in September, we turned around at The Cut, feeling just as happy as all the people we encountered.

We left Burlington and headed for Quechee State Park. We stopped at two attractions en route with RV parking, Ben & Jerry’s Factory and Rock of Ages. Ben & Jerry’s offers a factory tour with samples of their famous chunky ice cream. The first stop on the tour was the “Moovie Theater,” where we learned that Ben Cohen and Jerry Greenfield started making ice cream in a renovated gas station in 1978. The company is known for its social conscience and sense of humor. A sign said today’s sample was Broccoli Cheddar Chunk, an inspiration from an April Fool’s Day joke. The sample of the day was actually s’mores, which had people smiling with satisfaction. 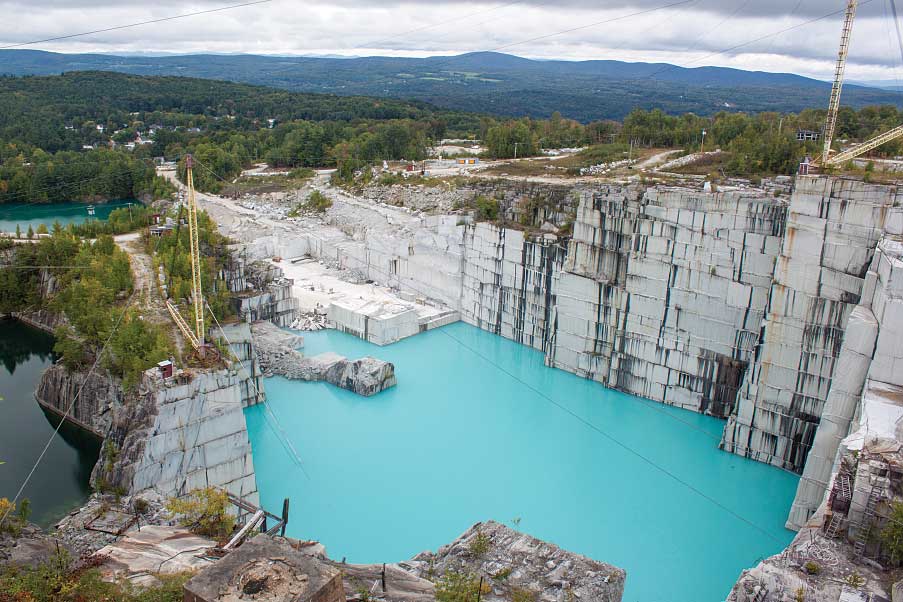 Rock of Ages is “North America’s premier granite quarrier and manufacturer.” Located in Graniteville, Smith Quarry is the “largest operating deep-hole, dimension granite quarry in the world,” at almost 600 feet deep. Our tour guide explained that quarry workers use wire saws to cut blocks of granite, each one weighing 25 to 30 tons. In the 160,000-square-foot factory, artisans create monuments, memorials and statues. We watched them at work from a raised observation deck. After our tour ended, we found the outdoor granite bowling lane. In the late 1950s, Rock of Ages experimented with this concept, but found that granite lanes were too hard on bowling balls. Nevertheless, we had fun setting up the pins and rolling the lightweight rubber balls down the lane, which was in remarkably good shape. If you go with your motorhome, call ahead for directions to the RV parking. 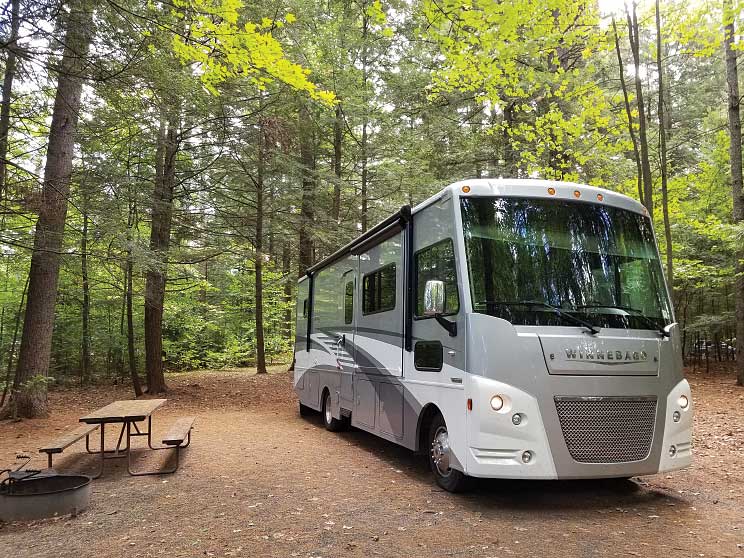 The campground at Quechee State Park has 45 RV sites nestled among the trees.

We stayed at Quechee State Park for two nights. The campground has 45 RV sites nestled among the trees. There are no hookups, but there are restrooms, showers and a dump station. The main attraction is the 165-foot-deep gorge, formed by glacial activity some 13,000 years ago. The view is impressive from the bridge, and it’s also fun to hike the Quechee Gorge Trail down to the Ottauquechee River. A trail at the campground connects with the Gorge Trail.

Next, we visited two nearby attractions: Sugarbush Farm and Montshire Museum of Science. Sugarbush Farm is a 550-acre maple, cheese and animal farm that’s been in the Luce family for three generations. In the sugarhouse, we learned what goes on during sugaring season, which lasts as long as daytime temperatures are higher than 40 degrees Fahrenheit and nights are below freezing (usually from late February to early April). Draft horses help collect sap from 8,500 trees and then the sap is boiled over a wood fire. It takes 40 gallons of sap to make 1 gallon of pure maple syrup. In 2018, Sugarbush made 2,180 gallons of syrup and 100 tons of cheese.

The Montshire Museum of Science has more than 125 hands-on exhibits. It is named for VerMONT and New HampSHIRE, the areas it serves. The indoor and outdoor exhibits appeal to children and adults. In the “Making Music” exhibit, my husband, Jim, played with several musical instruments, including drums, a cello and a theremin —an electronic instrument that generates sound without being touched. In the “Solve It!” exhibit, I learned I’m not as good as I thought at solving puzzles. Outdoors in the Science Park, we watched kids playing in The Rill, a 250-foot long watercourse that meanders from the Museum toward the Connecticut River. We explored the 100-acre forest on nature trails.

We moved to Along the River Campground in Twin Mountain, New Hampshire, for several days. The park has RV sites with full hookups, tent sites along the Ammonoosuc River and cabins. We chose it because it’s only 20 minutes from the Mount Washington Cog Railway. 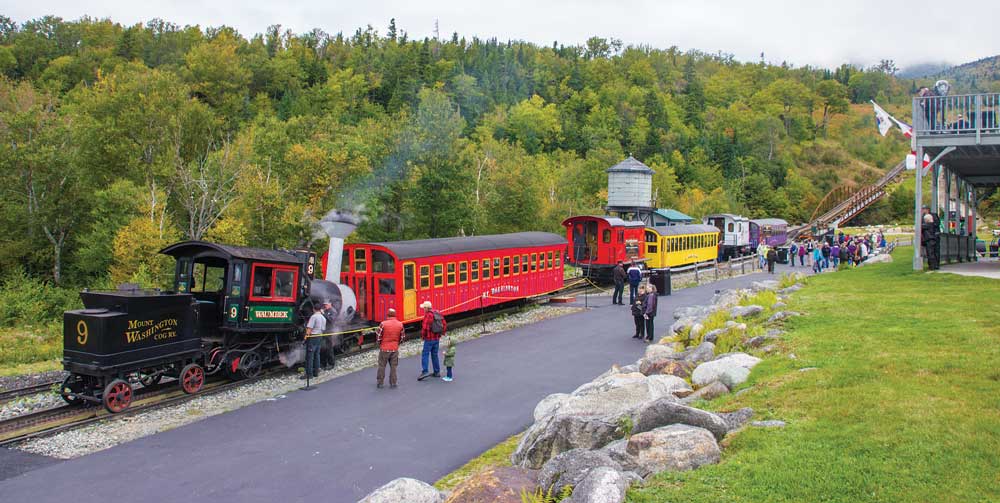 The Mount Washington Cog Railway takes passengers to the highest point in the northeastern U.S. on steam and biodiesel trains.

The next morning, we had reservations for the 9 a.m. steam train that took us 3 miles up to the top of Mount Washington. It’s the highest peak in the northeastern United States at 6,288 feet. The mountain has two other claims to fame. First, it’s home to the world’s oldest cog railway, which opened to the public on July 3, 1869. They now have two steam and six biodiesel locomotives. Second, it has “The worst weather in the world.” Wind gusts of 231 mph were recorded at the Mount Washington Observatory in 1934. Luckily for us, the weather was calm and in the mid 50s. After our one-hour narrated ride to the summit, we were above the clouds and ready to explore. The Tip Top House, originally a mid-1800s hotel, is now a museum. We visited Extreme Mount Washington, a museum on the lower level of the Visitor Center that shows how brutal the winters are. After we boarded the train for the return trip, Eli, the brakeman, asked if we were ready for the best five-minute ride of our lives. In spite of the enthusiasm of some passengers, he applied the brakes during our entire one-hour descent. 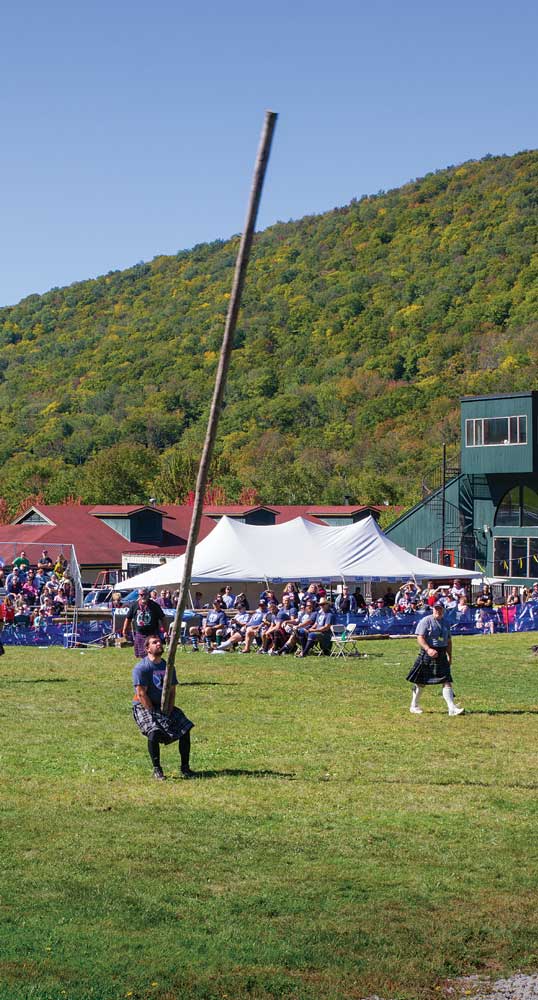 Athletic competitions at the New Hampshire Highland Games and Festival included the caber toss, tapered poles that are more than 19 feet long and weigh 175 pounds.

The New Hampshire Highland Games and Festival (September 20-22, 2019) is a three-day celebration of Scottish music, food, athletics and dance. The gathering at Loon Mountain Resort is the largest of its kind in North America. After finding out through ancestry.com that I’m 34% Scottish and Irish, I was excited to attend. We made a bee-line for the Clan Village where I found Clan Ross, one of the 65 clans represented, and perhaps some long-lost relatives on my dad’s side. We also watched some of the athletic competitions with strong men tossing around cabers — tapered poles that are more than 19 feet long and weigh 175 pounds — with more finesse than I would have tossing a baton. In the concert tent, Albannach, Scotland’s top tribal bagpipe and drum band, played to a standing-room-only crowd. Gary Maclean, winner of “MasterChef: The Professionals,” showed an eager audience how to make Scottish food that won him that title.

Vermont and New Hampshire’s reputations for beauty are well deserved. Now I’m one of those people saying, “It’s beautiful; you’ll love it!”