You Have to RV to This Spooky New Hampshire Ghost Town

Tucked alongside the Kancamagus Scenic Byway in New Hampshire’s White Mountains, the Russell-Colbath Homestead is the only remaining building in the once-thriving logging community of Passaconaway. A veritable ghost town today, visiting the homestead as part of an RV trip to the North Conway region is a must-do for anyone interested in the Granite State’s logging past.

Autumn, when the foliage along the Kancamagus is in its full splendor, is the perfect time for this New England RV trip.

Passaconaway of the Past

Passaconaway has long been at a crossroads between accessible and isolated. Nestled next to the Swift River, which flows alongside the eastern half of the Kancamagus, Passaconaway was originally a small agricultural outpost called Albany Intervale. Its heyday was between the 1850s and early 1900s. A series of lumber companies first constructed sawmills nearby, then later built railroads connecting to the town.

Fueling the growth of Passaconaway and similar communities like it across the state of New Hampshire was timber—there are more than 24 now-abandoned logging camps down the road from Passaconaway, near Lincoln Woods. By the 1850s, roughly 70% of the land south of the White Mountains had been cleared of trees. Logging interests were moving north. By the 1880s, logging in the “North Country” was at its apogee. Unregulated at the time, massive clear cuts quickly exhausted available timber in and around New Hampshire’s White Mountains, which led to massive forest fires, flooding, and damaged watersheds.

As logging companies focused on the harder-to-access timber in the Kancamagus region, Passaconaway swelled upward to 1,500 residents. Significant structures included: 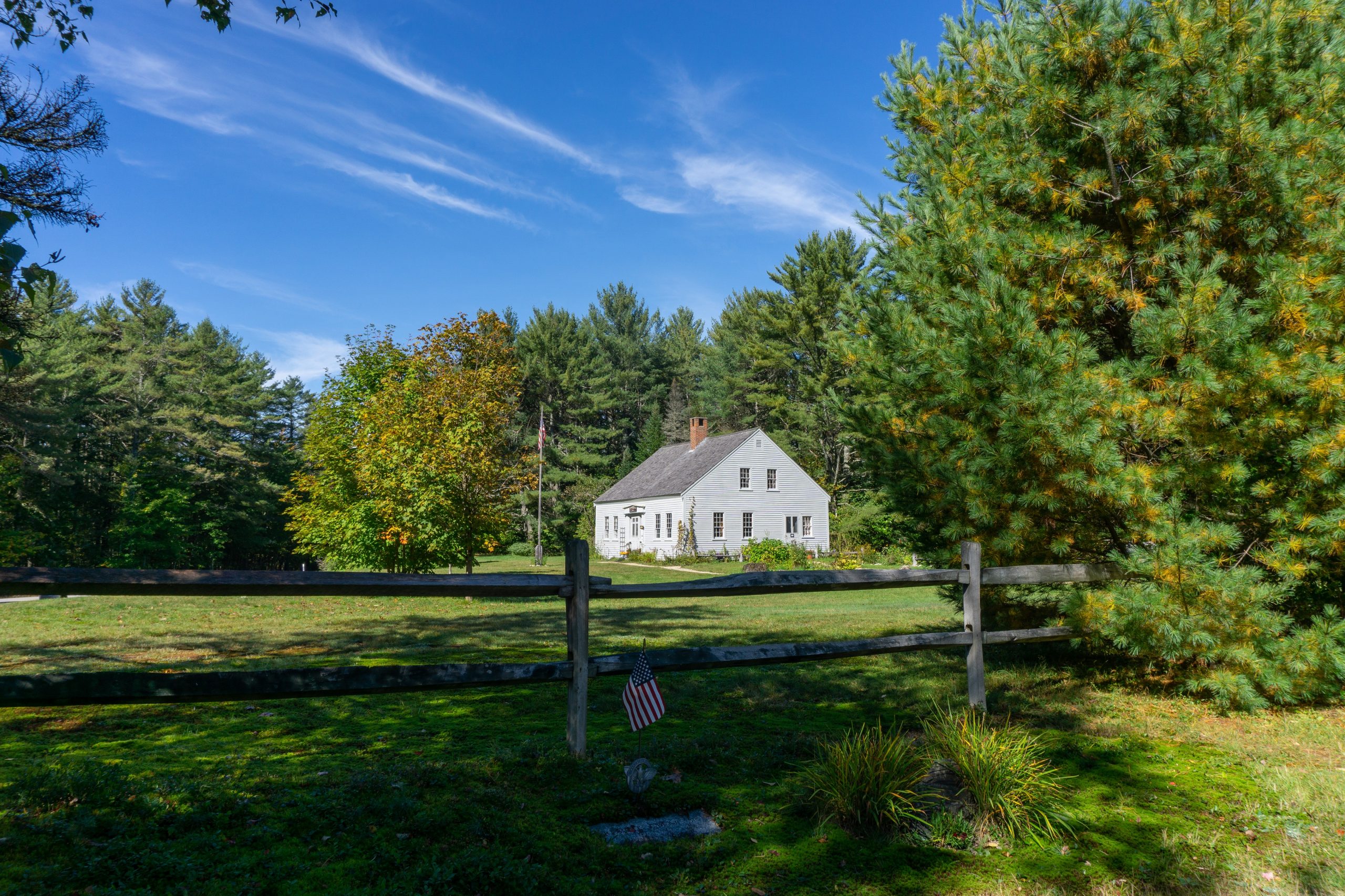 The Ghosting of Passaconaway

As the timber in the region disappeared, so did the community. The Conway Lumber Company completed its operations by 1916, moving both its railroad (called the Swift River Railroad, which was the primary link to ‘Conway), and its workers to other locales. The community’s post office closed the same year, further isolating the town’s remaining residents.

Unlike some of New Hampshire’s other ghost towns which have slowly been enveloped by the forest, finding Passaconaway is easy. Located at the approximate midpoint of the Kancamagus Scenic Byway is the town’s lone surviving building (the Russell-Colbath Homestead). You’ll also find a small cemetery, a few historical markers, and a new barn.

Driving the Kancamagus Scenic Byway, a roughly 35-mile-long road, is an RVer’s fall treat. It weaves through the White Mountains, favored by leaf peepers, and considered among the prettiest drives in New England. The Byway is about halfway between the popular tourist destinations of Lincoln and North Conway. 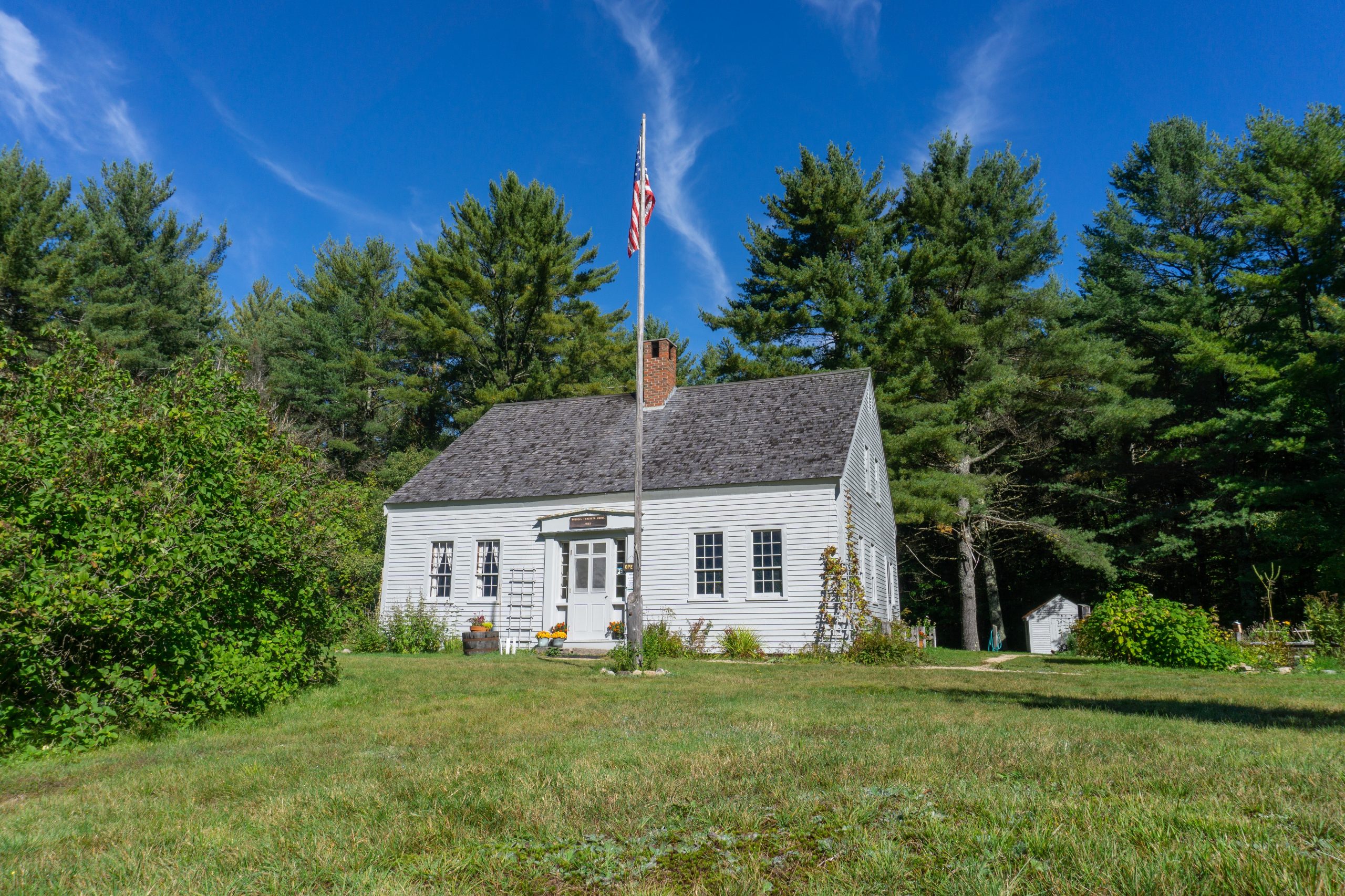 Forgotten Stories of the Russell-Colbath Homestead

The Russell-Colbath Homestead is the highlight of a visit to the ghost town of Passaconaway today. Why? It was home to one of the White Mountain’s most interesting characters and fascinating stories: Ruth Priscilla Russell Colbath, “the grand old lady of Passaconaway.”

Born in 1850 to the ancestors of some of the first settlers in the Passaconaway Valley, Ruth Priscilla Russell Colbath spent most of her life in Passaconaway and had a firsthand view of its boom and slow decline. In fact, she was the community’s first postmistress, with a portion of her homestead serving as the community’s first post office from 1890 to 1905. She was also the last remaining resident of the settlement when she passed in 1930.

What kept Ruth in Passaconaway while everyone else had abandoned the defunct logging community?–Her husband, Thomas Alden Colbath, who on a fall day in 1891 left the cabin telling Ruth that he would be “back in a little while.”

For 39 years, Ruth await the return of her husband, lighting a lamp in the window every night to illuminate the way home. Thomas did eventually return to the Passaconaway Valley, but too late for a reunion with Ruth—she had passed away three years earlier.

The Russell-Colbath Homestead and surrounding property were bought by the U.S. Forest Service in the 1960’s to preserve the remains of Passaconaway. The wood-framed homestead was built in 1832 and is listed on the National Register of Historic Places. Today it has been restored to its original condition.

The Russell-Colbath Homestead is home to a collection of historical photos and household items that show what life was like when Passaconaway was inhabited. Living history programs run from it throughout the summer and fall. Likewise, the barn is used for interpretive programs and occasionally hosts community events.

The ghost town of Passaconaway is a great stop for visitors to the White Mountains, but getting there is the best part of the adventure. The Kancamagus Scenic Byway, or simply “the Kanc,” runs east to west between the two popular tourist destinations of North Conway and Lincoln. Although the drive is almost always magnificent, there is no better time to drive the Kanc than when the forest is awash in the vibrant reds, oranges, and yellows of fall. It is among the prettiest foliage drives in New England, if not the nation. However, a trip across the Kanc offers more than mere foliage—the rugged beauty is exposed with a craggy granite cliff, roaring river, or mountain pass coming into view at every turn.

And while the Kancamagus is best known as a scenic drive, it provides no shortage of opportunities to get a closer look at the beautiful landscape, with numerous hikes catering to all levels of ability and experience departing from roadside trailheads. Here are a few options of varying difficulty for stretching your legs.

The Rail N’ River Trail is located behind the Russell-Colbath Homestead and is an excellent and informative stroll for those looking to get outside and learn more about the region’s history. The half-mile-long trail running to the Swift River and back is considered handicap-accessible—its wide crushed-stone path crosses wooden bridges as it leads you by panels detailing the area’s logging and railroad history.

Those looking for a longer but still mellow hike will want to check out Champney Falls, a dazzling 70-foot-long series of cascades that, at their pinnacle, plunge 30+ feet to a pool below. Suitable for most hikers, it departs the Kancamagus from the aptly named Champney Falls Trailhead and follows the similarly named Champney Falls Trail. The trail is well marked and gradually gains roughly 600 feet in elevation over its 1.5-ish miles to the falls (a three-mile round trip). 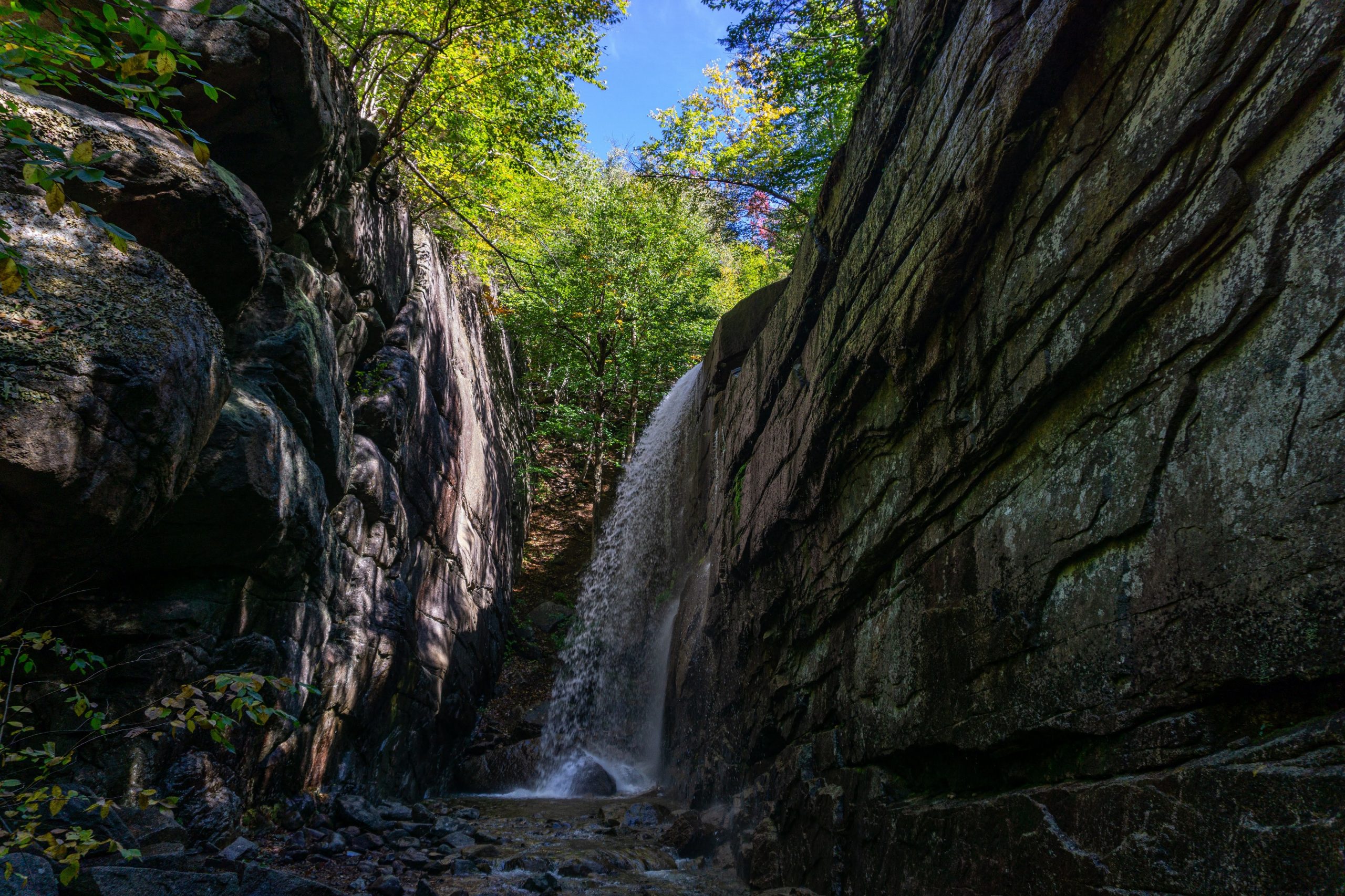 Are you feeling fit? A hike to the summit of Mount Hedgehog is a must-do for hikers serious about the scenery. It’s one of the “52 With a View,” a hiking list of New Hampshire mountains under 4,000 feet with striking views. The 5-ish-mile loop hike leaves the Kancamagus from the UNH Downes Brook Trailhead. The trail itself gains a little under 1,500 feet in elevation as it takes you across steep slabs along exposed ledges and offers unparalleled perspectives of some of the White Mountains’ most prominent peaks. You can hike the trail in either direction, but clockwise provides better views, which are spectacular during foliage season.

The roughly 10-mile trip over North and South Hancock passes two New Hampshire 4,000-footers–an impressive achievement for area hikers. Leaving the Kancamagus from the Hancock Overlook and crossing the Kanc at its notorious hairpin loop, the trail begins gently. It takes you farther and farther from the road before climbing sharply up South Hancock then rolling across the saddle to North Hancock. Take in the excellent viewpoint from the rocky outcropping just off North Hancock’s summit before tackling the steep descent and the long march back to the trailhead. This hike is the best fit for experienced and healthy hikers–it climbs almost 3,000 feet and rugged terrain. 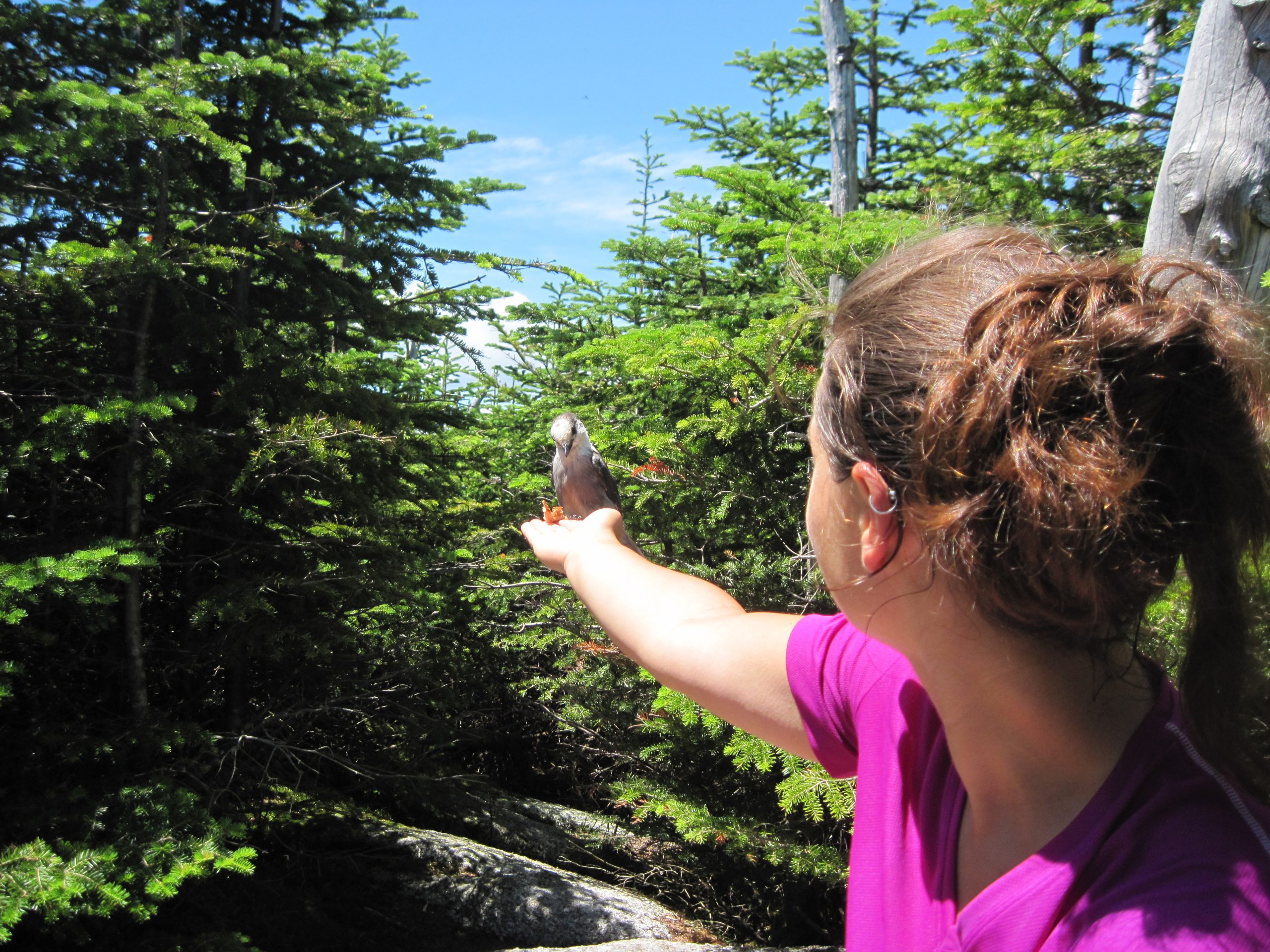 Where to RV Camp in Passaconaway

There are several options on the eastern end of the Kancamagus for camping. Passaconaway Campground, located about 14 miles from the Conway end of the Kancamagus, has 33 quiet wooded campsites, some of which sit next to a relaxing stream. The campsites are suitable for vans, truck campers, and smaller RVs and trailers. The sites are first-come, first-serve. There are no hookups, but the campground does have bathrooms, fire pits, and is pet friendly.

If you don’t feel like testing your luck, the nearby Covered Bridge Campground accepts reservations for 30 of its 49 sites. There are no hookups, but most RVs should have no trouble accessing the campground, although there is a 7′ 9″ height limitation and 3-ton weight limit through the covered bridge. Those with larger rigs will need to access the campground from Passaconaway Road.

Can’t find anything you like here? Try the close-by Jigger Johnson and Blackberry Crossing Campgrounds.

Where to RV Camp Nearby

In addition to the camping options on the western side of the Kancamagus (Hancock and Big Rock Campgrounds), North Conway and Lincoln ( which bookend the Kanc) provide a variety of camping options.

Eastern Slope Campground in Conway has everything from cozy cabins to 50-amp pull-thru’s with cable television and WiFi. North Conway’s Saco River Campground has over 180 big-rig-ready FHU Sites.

On the other side of the Kanc in North Woodstock (a town over from Lincoln), the Lost River Valley Campground features a variety of accommodations, including full hookups with 20, 30, and 50-amp electric service. 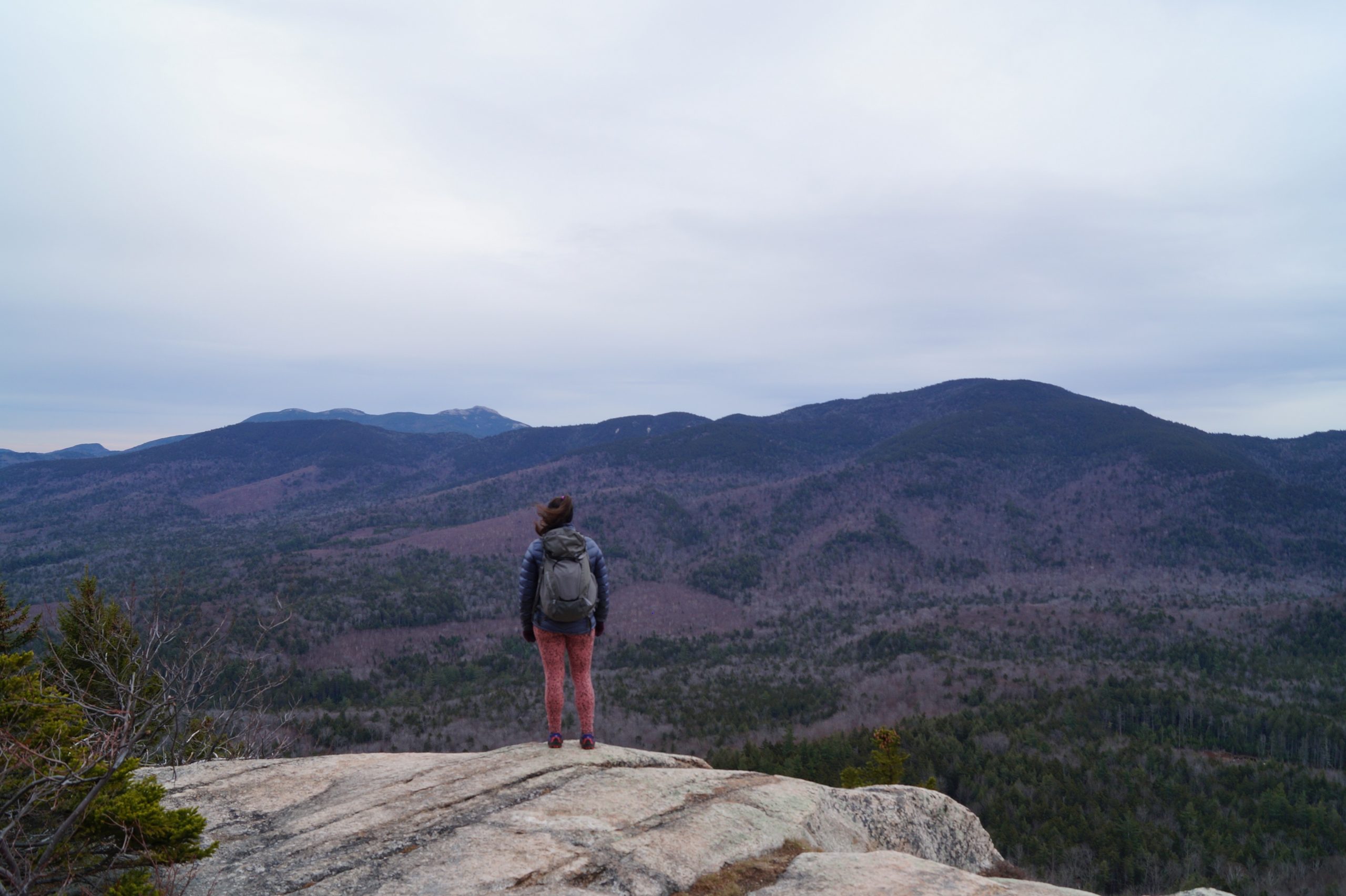 Passaconaway Hedgehog with Chocorua in the Distance. Image by Tim Peck.

Food and Drink in Passaconaway

You won’t find much for entertainment or dining on the Kancamagus, outside of hiking fare and granola bars, but both Lincoln and North Conway are packed with great options. The Moat Smokehouse and Brewery has been a North Conway staple for years. Try a barbecue brisket sandwich with spicy cajun fries, and wash it down with an Iron Mike Pale Ale—you won’t be disappointed.

The Woodstock Inn and Brewery, just a town over from Lincoln, is another can’t-miss dining option. You can’t go wrong with pub grub, but if you’re dying for a taste of home, try the “Better Than Mom’s Meatloaf” with a Pig’s Ear Brown Ale. The brewery has a great patio that sits on Woodstock’s quaint Main Street and, so long as they have the heaters running, it is a comfortable and entertaining place to sit, even on crisp fall nights.

RVing the White Mountains in Fall

Fall is the prime time to explore New Hampshire’s White Mountains, and visitors will discover the treasure trove of things to do in, and around, the Kancamagus Highway. Whether it’s exploring the region’s exciting past, unparalleled scenery, or challenging hikes, there’s much to do in this quiet corner of New Hampshire. Or just kick back and enjoy a beautiful autumn day in New England. 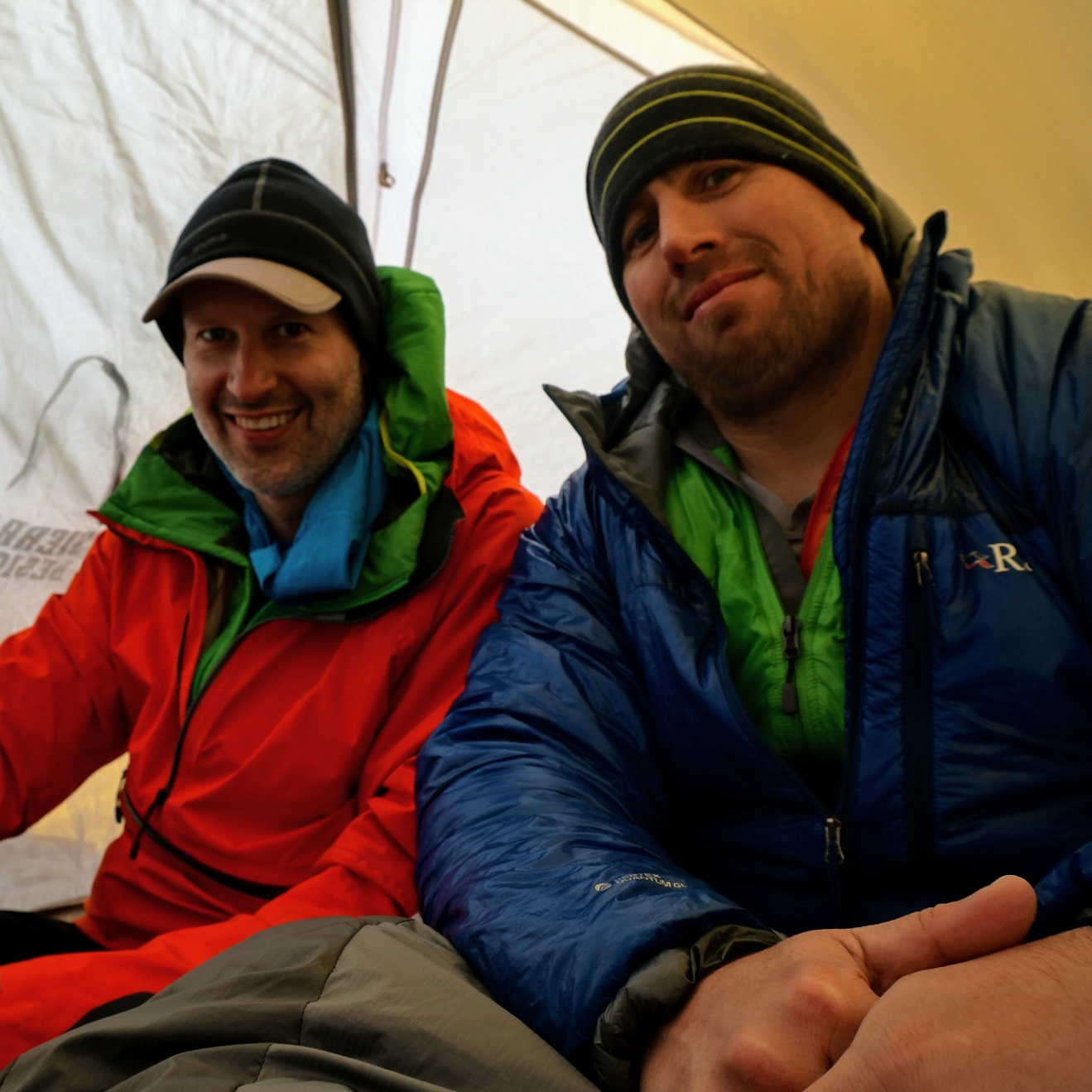 For almost two decades, Tim Peck and Doug Martland have been exploring New England’s adventurous destinations. Whether it’s the region’s tiniest boulders or its tallest peaks, Tim and Doug collaborate to write about their favorite outdoor activities, locations, and the histories behind the places they love to recreate.

For almost two decades, Tim Peck and Doug Martland have been exploring New England's adventurous destinations. Whether it's the region's tiniest boulders or its tallest peaks, Tim and Doug collaborate to write about their favorite outdoor activities, locations, and the histories behind the places they love to recreate.