The Canadian Rockies are a breathtaking must-see destination, and the wonderful thing for RVers is that four national parks in Alberta and British Columbia lie adjacent to each other, packed with campgrounds and anchored by two very special towns. My husband, Mark, and I started our journey into Canada at the Roosville Border Crossing, about 8 miles north of Eureka, Montana, on U.S. Route 93.

After driving nearly 150 miles north from the border with our fifth-wheel in tow, we were greeted by a group of bighorn sheep lazily crossing the highway at the entrance to Kootenay National Park in southeastern British Columbia. Although we had come to Canada’s Rocky Mountains to see snowcapped alpine scenery, one of the biggest highlights of the trip was our many wildlife sightings. The unhurried bighorns we first glimpsed were just the beginning.

Another surprise as we entered the park was the outdoor pool at Radium Hot Springs. Although it looked like a swimming pool nestled between towering mountain peaks, the water felt like a hot tub. It was early May, and the air temperature, under gloomy skies, was in the 40s Fahrenheit. But after soaking in the naturally heated mineral water for a while, we had to get out and cool off. Steam rose from our bodies, and we couldn’t wipe the grins off our faces. 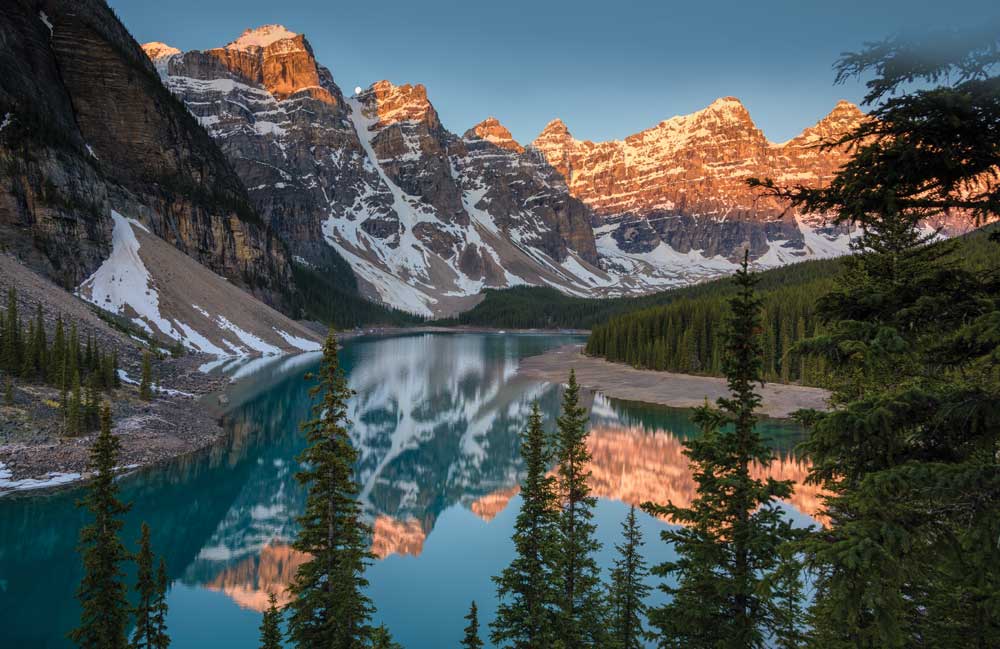 Canadian Icon: Nestled in the Valley of the Ten Peaks, Moraine Lake is so lovely that its image has been printed on everything from currency to travel brochures. At sunrise, the mountains glow pink. Photos by Emily and Mark Fagen

Driving the Kootenay Highway, B.C. 93, which runs through the national park, we spotted a black bear in a field of dandelions eating flowers for breakfast by the side of the road. There were no pullouts to stop and admire the bear, but we were rewarded with another sighting just a few miles further on, and more after that. 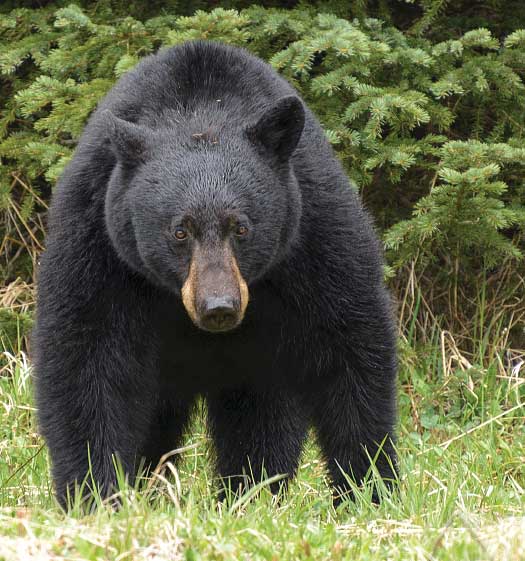 Seeing bighorn sheep and black bears were among the highlights of the author’s trip. Moose, elk, deer, caribou, mountain goats and even grizzlies populate the alpine area. 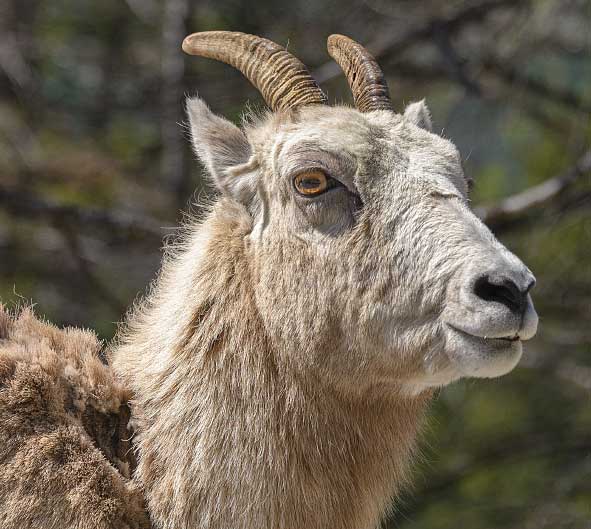 At Numa Falls we found wildly rushing water that crashed over cascades of rocks. A hike to the Paint Pots took us through the woods to a bright orange swampy area. Dipping a finger in the “pots” of orange mud, we painted a heart on the bark of a tree, good until the next rainfall. 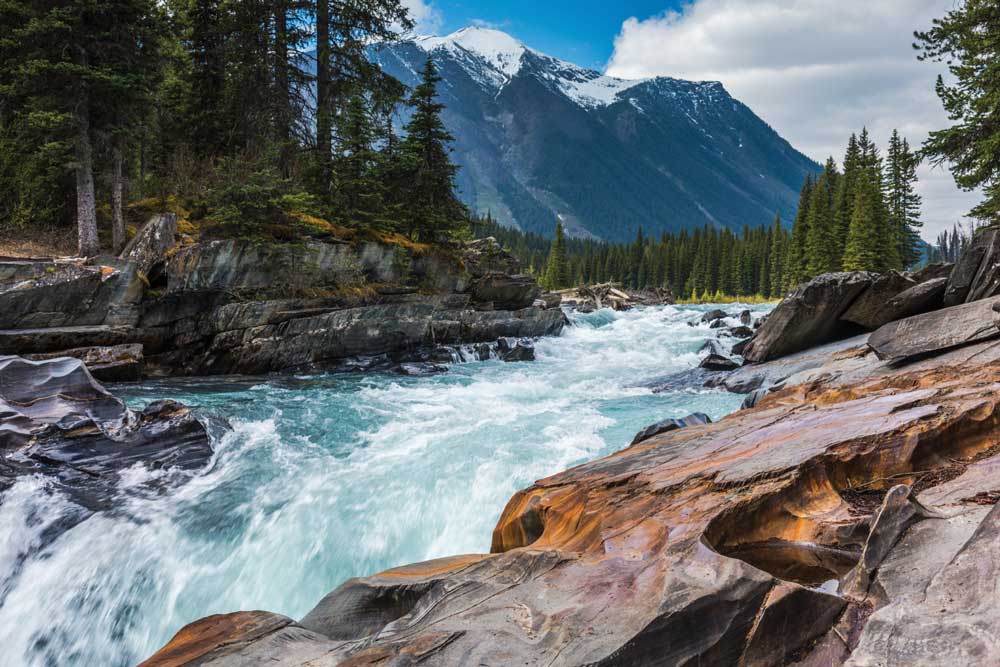 Numa Falls is right off B.C. Highway 93. Emily and Mark Fagan were fortunate to visit during the spring runoff when its force was particularly astonishing.

At Marble Canyon we hiked up to a pretty viewpoint where we found a couple of bright red Adirondack chairs just begging us to take a load off and enjoy the view. Later, we learned that pairs of chairs like these are scattered throughout Canada’s national parks. Visitors look for them and post selfies sitting in them. 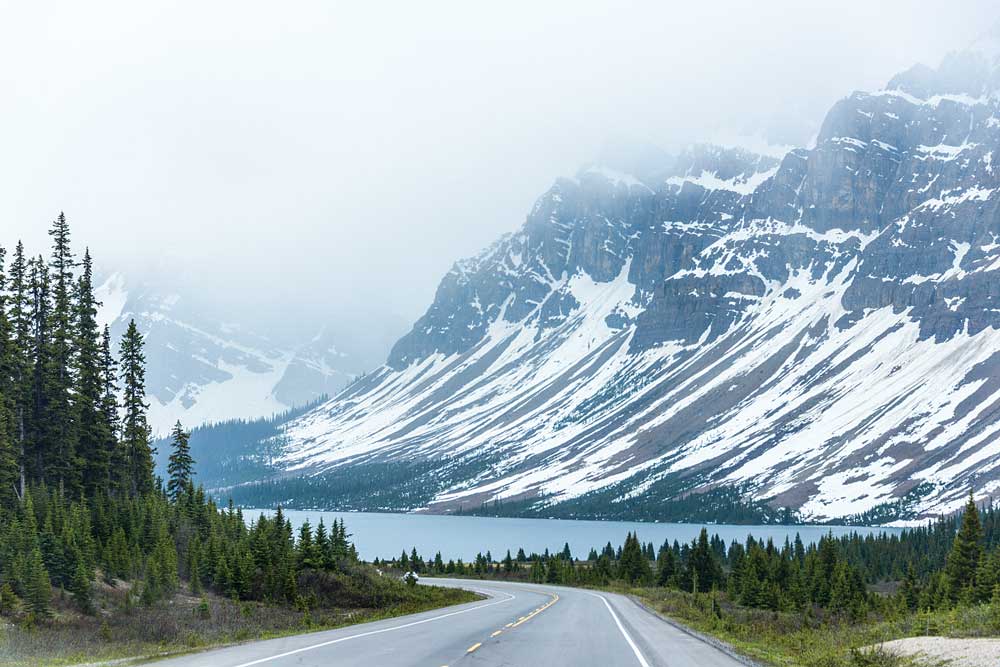 Traveling between the towns of Lake Louise and Jasper, the spectacular Icefields Parkway inspires repeated drives.

Right next door to Kootenay National Park, Banff National Park is across the provincial border in Alberta. The town of Banff lies at the heart of the park, and it is as quaint and charming as the Rockies are towering and stately. Horse-drawn carriages take tourists on sightseeing trips through town, and the graceful stone turrets and leaded-glass windows of the historic Banff Springs Hotel evoke an earlier time. Just 25 miles southeast is the much quieter town of Canmore where we rode our bikes on a delightful paved path. Both communities offer a variety of camping options.

Gorgeous Lake Louise lured us to the water’s edge at dawn where we joined other photographers capturing the sunrise as the distant peaks slowly lit up. Kayaks lined the shore waiting to be rented, and people from all over the world strolled along the path that embraces the lake.

We hiked a nearby trail on a steep route to the Lake Agnes Tea House. The floating slabs of ice in Lake Agnes were chilly reminders that winter was not long gone and we were too early in the season to get a cup of hot tea there. During the summer, staff workers stay up at the teahouse all week and hike down on weekends. Everything necessary to serve guests is hiked in.

As we ambled back down the trail, we caught glimpses of the vivid turquoise water of Lake Louise between the trees. Thick silt in many of the glacial lakes in the Canadian Rockies turns the water brilliant shades of blue. Aquamarine-tinted Moraine Lake is next to Lake Louise, and during the earliest part of spring, between avalanche and tourist seasons, the road to the lake is open only to nonmotorized vehicles. What a glorious time to ride a bicycle over the mountain pass and down to Moraine Lake and the Valley of the Ten Peaks. 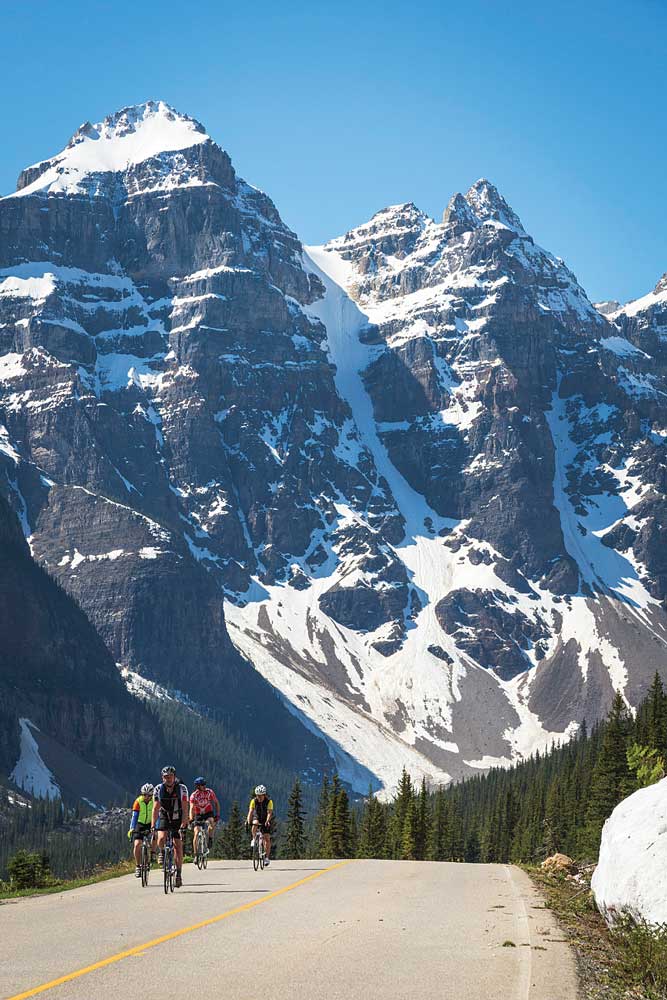 As we descended, coasting at tremendous speeds, the jagged peaks behind the lake grew ever larger. We climbed up on the moraine (a massive pile of rocks left behind by the glaciers) and gazed at the famous view that has appeared on the back of the Canadian $20 bill.

Ready to soak in steamy mineral water again, we basked in the thermal warmth of the outdoor pool at Banff Upper Hot Springs. 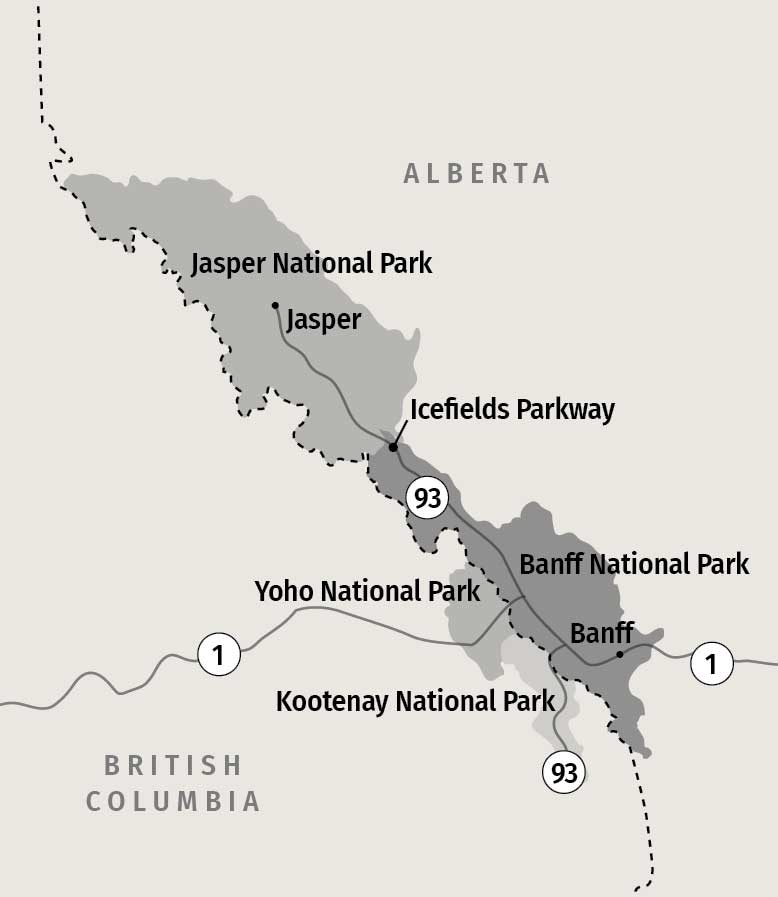 Camping in the Canadian Rockies

Campsites are plentiful throughout Banff, Jasper, Kootenay and Yoho national parks, including a few on the Icefields Parkway, but many have no hookups and aren’t suited for larger RVs. At Banff National Park’s more than a dozen campgrounds, full-hookup campsites can be found at the Tunnel Mountain Trailer and Lake Louise Trailer campgrounds, and electric-only campsites are available at Tunnel Mountain II. Jasper’s largest campground, Whistlers, is currently closed for renovations but will reopen in 2020 with full-hookup sites. Jasper’s Wapiti Campground offers electric-only sites. Kootenay has both full- and partial-hookup campsites at Redstreak Campground, and Yoho offers dry camping only. Campsite reservations are strongly recommended, especially in Banff National Park.

We crossed the provincial border back to British Columbia for a tour of Yoho National Park. The brilliant colors of the waterways in the Canadian Rockies had transfixed us, so Yoho’s Emerald Lake was an immediate draw merely by virtue of its name. Before arriving at the lake, we stopped at the overlook for Natural Bridge, a series of bright blue waterfalls surrounded by expansive boulders.

Emerald Lake turned out to be a dramatic jade hue under cloudy skies and was dotted with bright red kayaks. As we hiked along the shore, our ears perked up when we heard the distinctive cry of a loon. Scanning the water, we spotted a male loon enjoying an early morning bath-and-splash. He repeatedly dunked his head and shook sprays of water out of his wing feathers just a few yards from where we stood.

From the south, the Canadian Rockies follow a northwesterly course, and the 150-mile Icefields Parkway winds along their heart from just outside Lake Louise in Banff National Park to the town of Jasper. This scenic highway showcases one awe-inspiring view after another the entire way, and the southern half is so spectacular that we drove it several times.

Scenic overlooks and places to stop are few, so it is worthwhile to pull over whenever one appears. Starting from the southern end, we came across the first overlook just a few miles in at Herbert Lake. The snowcapped mountains behind the lake reflected perfectly in the mirror-like water, and the fast-moving clouds played with their shadows on the hillsides.

At Bow Lake we joined dozens of tour buses and rental RVs in the parking area and crept down to the shore where the water’s surface was as smooth as glass. Suddenly, we heard the faint roar of a distant avalanche. Grabbing our cameras with their telephoto lenses, we watched the face of an ice wall fall off the mountain. Across the highway from the overlook, we climbed the hillside for a bird’s-eye view of the scenery as the morning sun lit the mountain peaks. 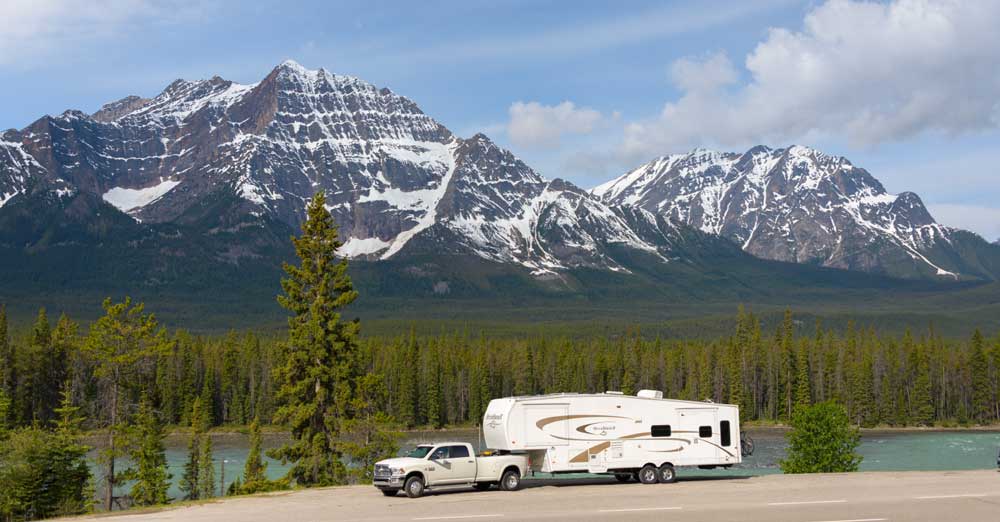 Once the snow melts, the Icefields Parkway is easily driven with any size RV. The Fagans had no trouble with their 36-foot fifth-wheel

But it was Peyto Lake a few miles further on that really took our breath away. The hike to the lake is a short jaunt through the woods, and we picked our way carefully between ice chunks and mud patches in the trail. When the trees finally cleared and the lake came into view, we stopped dead in our tracks and mouthed the word, “Wow!” just like every other hiker before and after us.

In the distance, tucked between towering mountains, brilliant blue Peyto Lake filled a small crevice. It looked like the gods had spilled a can of rich blue paint in a puddle at the base of the peaks. Driving a little further north, we came to Lower Waterfowl Lake where grouse wandered freely along the shoreline and waddled up to us until they were within arm’s reach.

The Columbia Icefield is perhaps the most famous and popular tourist attraction on the Icefields Parkway, and we arrived to find ourselves surrounded by dozens of tour buses parked outside a huge and sophisticated visitor center. Throngs of people inside were purchasing tickets for rides on specially designed vehicles that drive out onto the glaciers. Videos of the wonders of these glaciers played on TV screens high above, entertaining the crowds and keeping everyone happy as the long lines crept toward the ticket counter. In the end, we decided to skip the lines and save the glacier ride for a future trip.

Continuing up the highway, the soaring, craggy peaks on either side gradually diminished in size as we approached the heart of Jasper National Park.

The mountains shirked their snowy-white hillsides in favor of the grays and greens of granite and trees. A walking path took us to roaring Athabasca Falls via stairs and scrambles to many pretty viewpoints.

Down by the pebbly banks of the Athabasca River, we found dozens of small rock-pile cairns that resembled people. Each one had a head, legs and outstretched arms. There were big ones and little ones standing around on the rocky shore. We scratched our heads at this odd and obviously man-made treasure. Only later did we learn that these are inuksuit, and they have their origin with the native Arctic cultures of North America. People now erect them both in reverence and in fun all over the chillier parts of the continent.

We wound up spending a memorable month in the Canadian Rockies, and at the end of it, all we could think of was that we couldn’t wait to come back. 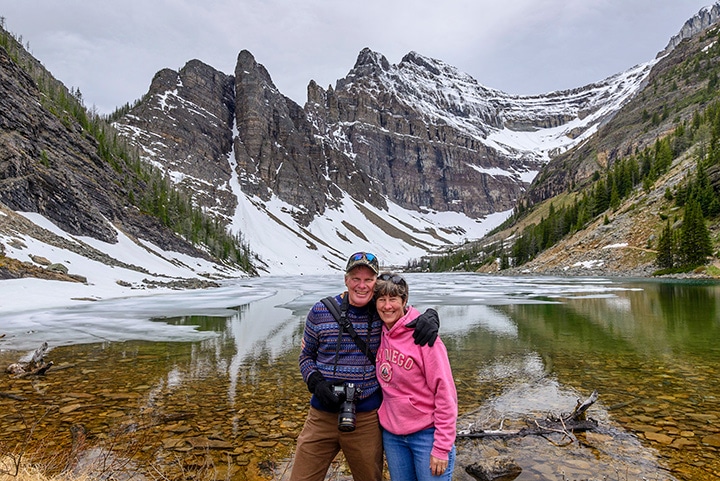 Author Emily Fagan and her husband, Mark, take advantage of a scenic photo opportunity at Lake Agnes at the end of a popular hiking trail that starts at Lake Louise in Banff National Park.