One of my family’s great pleasures is a waterfront campsite where we can swim, paddle, fish, and watch birds and other wildlife attracted to the water. Paddling and fishing are particularly appealing. There’s something supremely relaxing yet stimulating about being on the water in a human-powered craft. Maybe we love it because it’s truly “vacation” to us. We live in the northern Rocky Mountains where rushing streams and rivers rather than quiet lakes and ponds are the common water sources. As a result, when we find a place where the water is paddler-friendly, we look for a put-in.

While visiting Colorado in June last year, we found not one but five spots that fit our canoeing criteria. We dubbed our trip the Colorado Calm Waters Tour. Each of these lakes is a perfect place to park and paddle for a week. String all five together, and you’ll also see some of the most beautiful parts of the Centennial State.

The first stop on our aquatic journey was Horsetooth Reservoir in the foothills just west of Fort Collins. Named after Horsetooth Mountain on the southwestern side of the reservoir, this 6½-mile-long, 1,900-acre body of water sits at an elevation of 5,430 feet. It’s a long, skinny reservoir with a 200-foot depth at its deepest point but with a number of quiet, shallow bays and backwaters.

The reservoir was built in 1949 by the Bureau of Reclamation to divert water for drinking, irrigation and hydropower. It inundated the town of Stout. Although the community relocated to the south bay, the foundations of the schoolhouse and several other buildings of the original settlement lie at the bottom of the reservoir, attracting scuba divers.

Horsetooth Reservoir is also a super spot if you like to keep your head above water. It’s surrounded by 2,000 acres of public land. In addition to fishing and boating, people come to road and mountain bike, rock climb and camp. More than half a million visitors flock to Horsetooth each year, but it did not feel crowded in early June when we were there.

While powerboats are allowed on the lake, there are sizable no-wake zones at North Eltuck Bay, which is where we launched our kayaks. The water was high, which made the fishing more challenging. While my husband, Jack, cast to every nook and cranny of the shoreline, I poked around by a red sandstone cliff and soon discovered the hard-mud nests of a flock of swallows. The little birds bolted in and out of their conelike homes, catching bugs and then bringing them back to their hidden hatchlings.

When I tired of the birds, I spent the rest of the afternoon reclining on my kayak, soaking up the sun. At Horsetooth Reservoir, you can be as active or as lazy as you like. 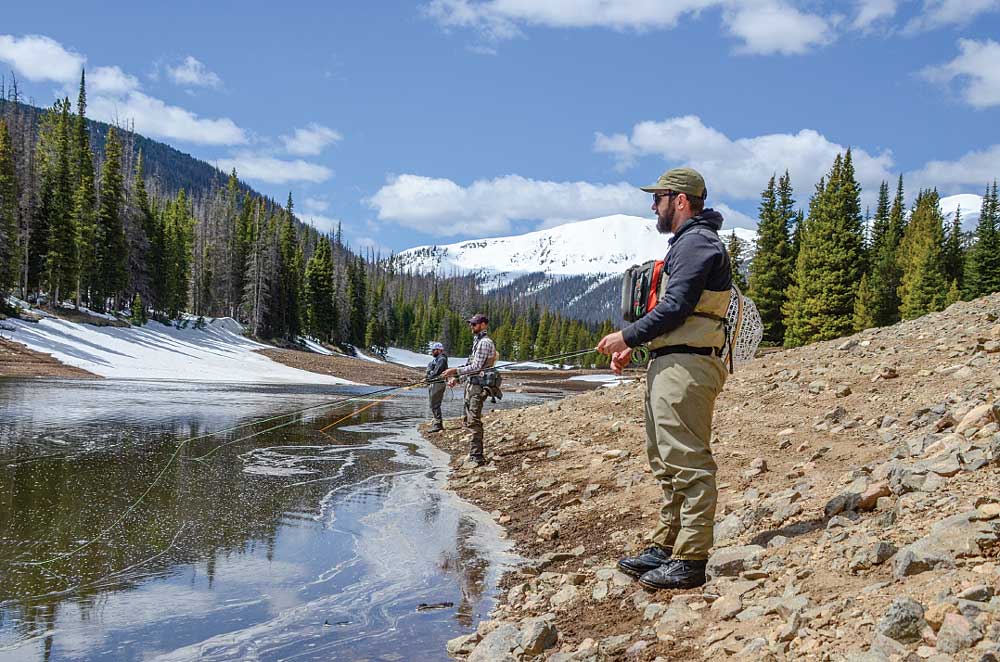 Fishing for Arctic grayling from the alpine shoreline of 150-acre Joe Wright Reservoir near the top of 10,276-foot Cameron Pass.

From Horsetooth Reservoir, we headed west on scenic Colorado Highway 14 along the Cache la Poudre River toward Walden. The river and this well-maintained two-lane highway cut through the heart of Roosevelt National Forest before heading over 10,276-foot Cameron Pass atop the Medicine Bow Mountains.

Just before we crested the pass, Jack pulled over by a small dam. The sign at the pullout read “Joe Wright Reservoir.”

“Why are we stopping here?” I asked.

Spring barely had a toehold at this elevation. There were small patches of exposed earth here and there, but most of the ground was covered with old, crusty snow. Compared to Horsetooth Reservoir, the 150-acre Joe Wright Reservoir was a pond, and a cold one, still half-covered with ice. The temperature on the dashboard read 38 degrees Fahrenheit.
“Grayling,” replied Jack.

While common in Arctic freshwater habitats and northern Pacific drainages, Arctic grayling are a rarity in most of the Lower 48. Originally native to Michigan and Montana, the fish died out in Michigan in the 1930s. The Montana population barely hung on, as other fish were unwittingly introduced to their chilly waters. However, beginning in the 1970s, roe from the surviving Montana grayling were used to stock other high-elevation lakes like Joe Wright Reservoir, where they now naturally reproduce.

“Are you thinking of paddling here?” I asked, already planning to stay in our comfy Ford Expedition.

“No,” replied Jack, “But I am planning to go fishing.”

Joe Wright Reservoir may be small, but it has a huge reputation among anglers as the place to catch Arctic grayling in Colorado. It was a fish I didn’t want to miss.

We bundled up, strung our fly rods and headed through some scrappy fir trees toward the edge of the lake. From there we tromped across frozen mud toward the inlet, which gushed with spring runoff. Three other anglers were already casting into the dark, cold water.

“Got one!” shouted the one closest to me, as I was about to pass above him.

The tussle was quick. Within minutes, a 10-inch silver fish with dark spots on its sides flopped in his net. The fish shimmered with hints of blue and green in the sun. The angler wetted his hand, then gently picked up the fish to release it. As he did, the impressive sail-like dorsal fin stood up against the palm of his hand.

“It looks like a tropical fish,” I observed, now even more eager to catch one myself.

Luckily, the grayling were hungry. After Jack and I caught a dozen between us, we needed to warm up. We headed back to the Expedition, then continued to our next destination. 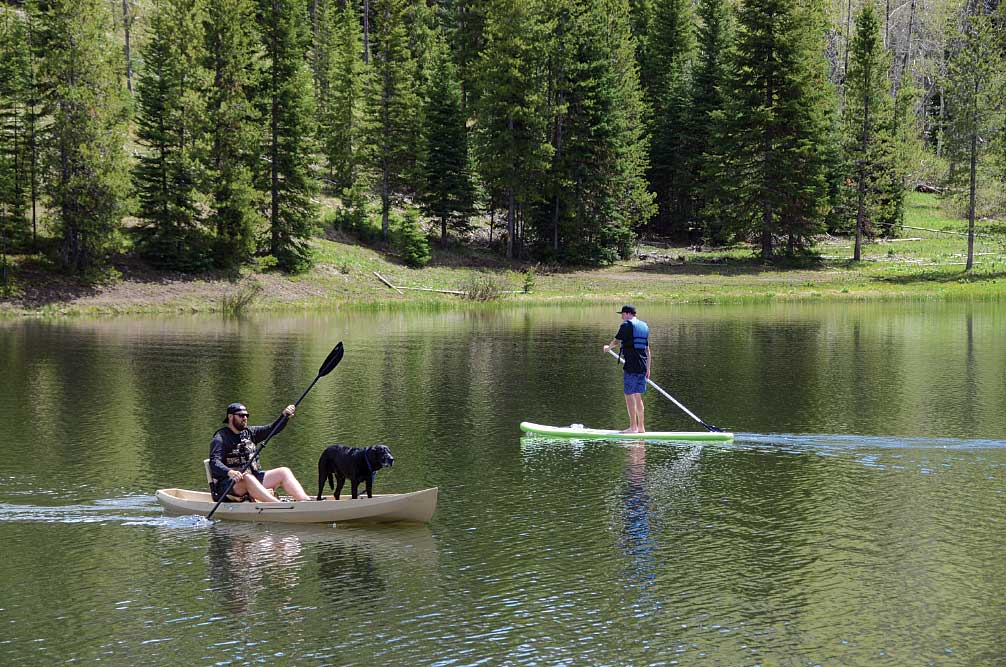 We followed Highway 14 through Walden, then crested the Continental Divide at 9,426-foot Rabbit Ears Pass on U.S. Route 40. Pearl Lake is about 25 miles north of Steamboat Springs in Pearl Lake State Park. The entire lake is a no-wake zone. Though it’s an easy drive from Steamboat, it feels a million miles away. A sense of peace pervades the area.

We pulled into the campsite, paused a moment to ogle the view of Farwell Mountain, then wandered down to the water’s edge. A handful of kayakers and SUPers made their way here and there across the glassy water, some with dogs on their bows. I was eager to join them, then something caught my eye on the opposite shoreline. 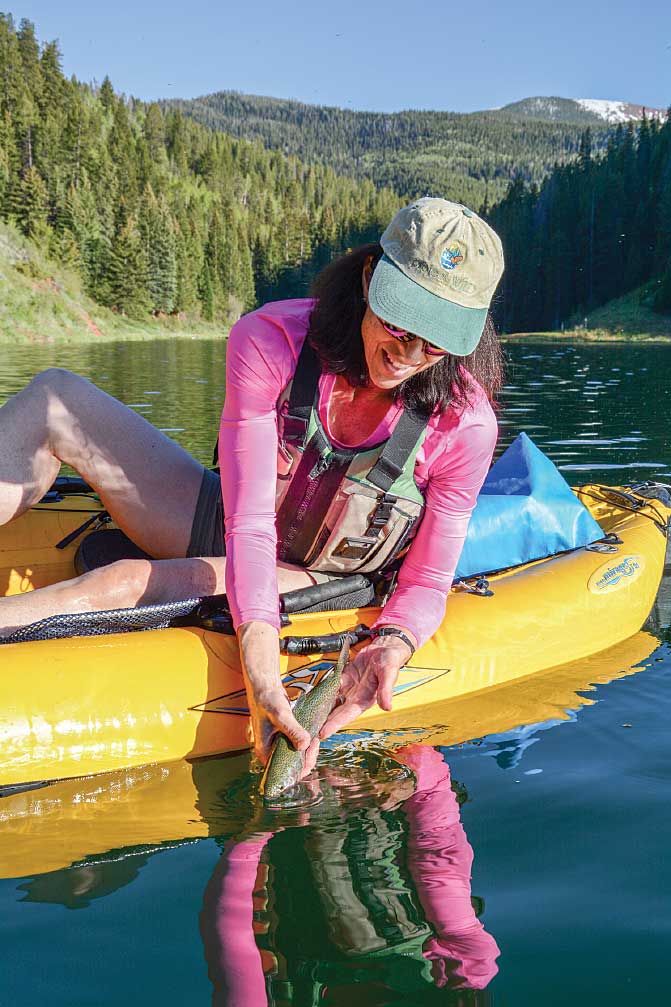 The author releases a rainbow trout she caught on glassy Sylvan Lake in the White River National Forest.

Pearl Lake is well-known among wildlife watchers. More than 200 species of migratory and resident birds can be seen here, including northern harriers, western screech owls and downy woodpeckers. Greater sandhill cranes nest in the marshy areas by the lake in the spring. I watched a mule deer buck emerge from the lodgepoles on the opposite side of the lake. It looked around, then bowed its head to the water to drink. Pearl Lake was indeed a pearl of a state park.

It was tough to leave the serenity of Pearl Lake, but our next stop, Sylvan Lake State Park, 10 miles south of Eagle, turned out to be equally enjoyable. Merriam Webster’s dictionary defines “sylvan” as “located in peaceful woods.” Sylvan Lake, a 42-acre lake in the White River National Forest, was indeed sylvan.

Stands of aspens spilled down the surrounding hillsides to the water’s edge below snowcapped peaks. From the ridge in the campground, the lake looked hemmed in by endless acres of dense green forest, but numerous grassy spots along the shoreline gave it a more open feel from the water. Several families picnicked in these open areas. Kids giggled as they played tag or watched their bobbers sink under the weight of a trout. The scene warmed our hearts and made us feel welcome.

The lake was perfect glass at sunset when Jack and I cast off from shore in our kayaks. The surface was speckled with pollen that sparkled like diamond dust in the golden light. We paddled to the far corner of the lake into a quiet cove. The fishing was easy, but after a few bites I stowed my rod and paddle, put my feet up and closed my eyes. Now this was a vacation! 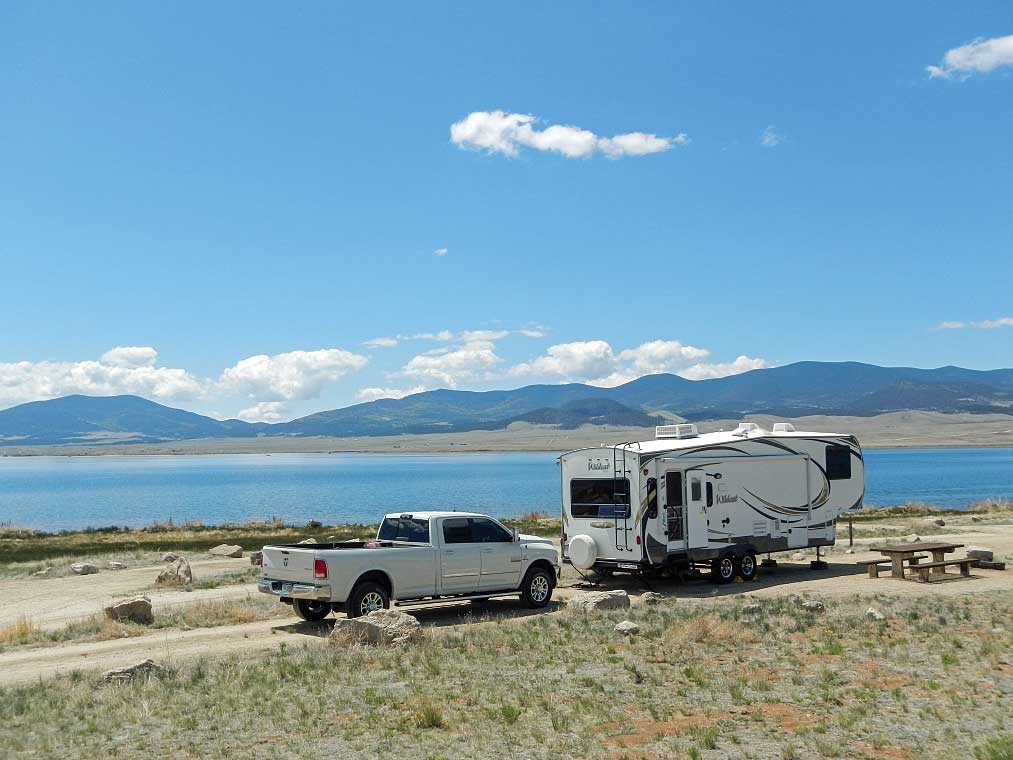 The last stop on our Colorado Calm Waters Tour was Eleven Mile Canyon Reservoir, just west of Colorado Springs. Eleven Mile Reservoir, which is actually 5½ miles long, was a sharp contrast to the small mountain lakes we had just visited. The water is bigger — 3,400 acres — and busier, but we still found a number of sheltered pockets along the shore where we could duck in away from motorboats.

We parked at a campsite on the northwest side of the lake and immediately discovered a sandy beach below a low bluff, the perfect place to set up a lawn chair and relax with a book. That said, it’s hard to keep one’s nose in a book with such a superb panorama.

The reservoir has a reputation for large rainbow, brown and cutthroat trout, kokanee salmon, carp and pike. We launched our kayaks at the beach, then paddled a short way off shore. No luck, but no worries. We had already caught lots of fish on our tour, and we knew we would be back. After all, we had found five perfect paddling spots. 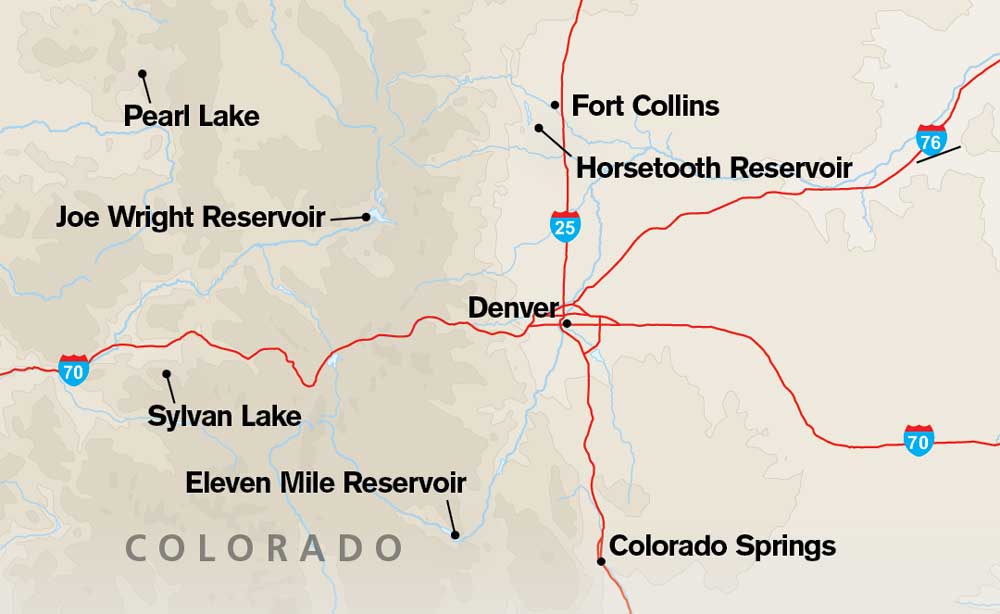 Campsites at Horsetooth Reservoir and Eleven Mile, Pearl Lake and Sylvan Lake state parks can be booked on the Reserve America website. Be sure to make reservations early. Most campgrounds in these areas are small, and all are busy when the weather is warm.

To search for RV parks and public campgrounds in Colorado and throughout North America, use the Find a Campground tool on the Good Sam Club website.

• Bring hiking shoes, mountain bikes and binoculars. In addition to paddling, the state parks around these reservoirs offers exceptional hiking, biking and wildlife watching.
• Slather on the sunscreen. These lakes are at high elevations above 5,000 feet. The sun is strong even on a cloudy day, and its rays intensify when reflected off the water.
• Respect leash laws. Pets are usually allowed in Colorado state parks but must be leashed.
• Stay on the roads even though the land looks OHV-friendly. Off-road driving damages fragile flora.
• Keep a clean campsite. Black bears and other animals are attracted to food odors.
• Check swimming regulations. Taking a dip might not be allowed, depending on the lake.
• Wear a personal floatation device. Winds can kick up at any time, swamping a small watercraft, and the water is cold, even during the summer.
• Clean your boat, fishing gear, anchor lines and anything else that touches the water to prevent invasive hitchhikers from moving from lake to lake.