I love eating at a place with a sense of history, and the Baldwin Saloon in The Dalles, located in Oregon’s beautiful Columbia River Gorge, certainly fits the bill. The Baldwin began its good-food tradition in 1876, when brothers James and John Baldwin ran a restaurant and saloon. With its location next to the railroad and near the busy Columbia River, the Baldwin Saloon became the community’s gathering place.

After the Baldwins, “Dr.” Charlie Allen operated a saloon here. An interesting man who was never a real doctor (he had sold eyeglasses), Allen had iron medical insignias cast into the building’s facade. 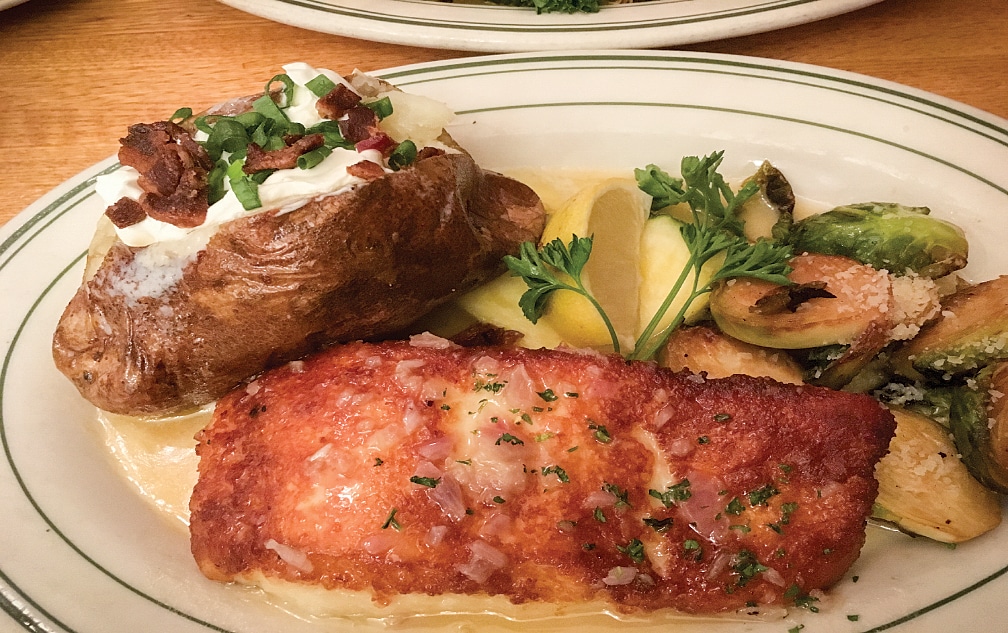 Parmesan-crusted halibut is a favorite, especially with Brussels sprouts on the side.

In later years, the building served as a steamboat navigational office, a warehouse, a coffin-storage site, a state employment office and finally a custom saddle shop.

It took nearly a year for Mark and Tracy Linebarger, the current owners, to restore the Baldwin as a restaurant and bar, and the Baldwin Saloon reopened its doors in 1991.

For 25 years, the saloon has been a destination for foodies and history buffs. The old building’s original brick walls and fir floor are complemented by rich mahogany and golden oak booths and tables, beautiful turn-of-the-century oil paintings and an 18-foot-long mahogany back bar with large, scrolled columns and an original mirror made in the early 1900s. A piano player nestled on a ledge above the dining tables tinkles the ivories on an 1894 Schubert mahogany piano.

The food at the Baldwin is impressive. They make everything in-house – from pillow-soft bread to luscious sauces and desserts. We dined on fresh halibut with a Parmesan crust and tender prime rib that was cooked and seasoned perfectly. We also enjoyed the delicious side of Brussels sprouts, available when in season.

A few years ago, Mark turned chef duties over to executive chef Tammy Huffman, a graduate of Le Cordon Bleu College of Culinary Arts. Huffman grew up in The Dalles and used to babysit the Linebargers’ children. For Huffman, running the Baldwin is a dream come true, and she’d like to own the place someday. “The Baldwin has so much history, and Mark has created a level of excellence that I’m honored to continue,” she told us. For more information, call 541-296-5666 or visit their website.