The sign reads: “St. Vincent’s Beach Where the Whales Come to Play.” The wet, gleaming back of a 50-foot humpback suddenly appears just 10 feet from where the water meets the sand. Excited visitors, cameras and phones in hand, scurry along, tracking the whale as it rises and falls in the shallow water. I rush toward the beach just as the cetacean’s bumpy head and back crest the water, and it blows a jet of water and air with a whooshing sound. All around are tiny bubbles. The whale is bubble-net fishing – corralling tiny smelt-like capelin.

Another cetacean, slightly smaller, swims along the beach-line, showing its back, then its curved tail fluke. A third whale bobs a little farther down, swimming toward me, circling back to catch more fish. In the bay, a dozen whale waterspouts blow high into the air.

I reach the water’s edge just as the big whale lifts its knobby head completely out of the water. It opens its vast mouth, displaying long black and white grooves under its jaw. It gulps a huge mouthful of water, then crashes with a torrent of spray, disappearing under the water. This really is where whales come to play. 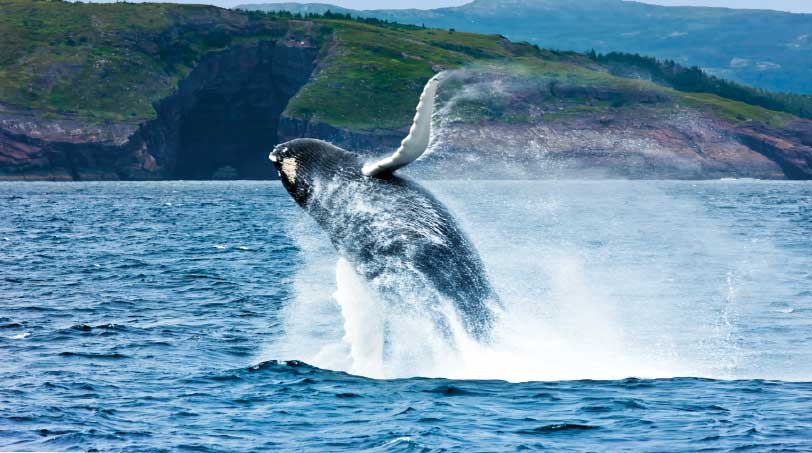 We’re in Newfoundland, the island portion of the Canadian province of Newfoundland and Labrador. At more than 42,000 square miles with nearly 11,000 miles of coastline, Newfoundland, affectionately called “The Rock,” is the country’s fourth-largest island. It’s a wild, untamed land encompassing vast distances and surprises around every corner.

For an RVer, Newfoundland isn’t easy to reach, yet many do – and it’s worth the effort.
You can take a Marine Atlantic ferry (www.marineatlantic.ca/en) from North Sydney, Nova Scotia, to Port aux Basques, in southwestern Newfoundland, or from North Sydney to Argentia, which is a 90-minute drive from the capital city of St. John’s. We chose to fly into St. John’s and rent an RV from Islander RV. Because the island is the size of California, we couldn’t see it all – or even a large part of it – in the week we allotted. We settled on exploring the island’s eastern coast along the Avalon and Bonavista peninsulas and Twillingate Island, aka Iceberg Alley.

St. John’s is a lively harbor town of 100,000 that’s the provincial capital and its largest city. The walkable downtown is filled with historic buildings in a riot of reds, blues, pinks, yellows and oranges. The vibrant architecture may be a defense against gray, cloudy weather. St. John’s residents happily boast their city is “the rainiest, foggiest, snowiest and windiest place in North America.” It certainly has variable weather. During our late-July visit, St. John’s treats us to sunshine, cool cloudy skies, misty fog and a few moments of driving rain.

The downtown’s two main streets are packed with one-of-a-kind shops and plenty of bars, cafÃ©s and coffee shops. We trundle down McMurdo’s Lane to the Duke of Duckworth, a popular bar/restaurant serving Irish fare and tasty fish and chips. (You might recognize it from the Netflix series “Republic of Doyle.”)

St. John’s is brimming with history. Signal Hill, a former military citadel built in the 17th century overlooking the city and harbor, defended the town through World War II. In 1901, Guglielmo Marconi received the first trans-Atlantic wireless signal here. We scramble up Cabot Tower for a sweeping view. 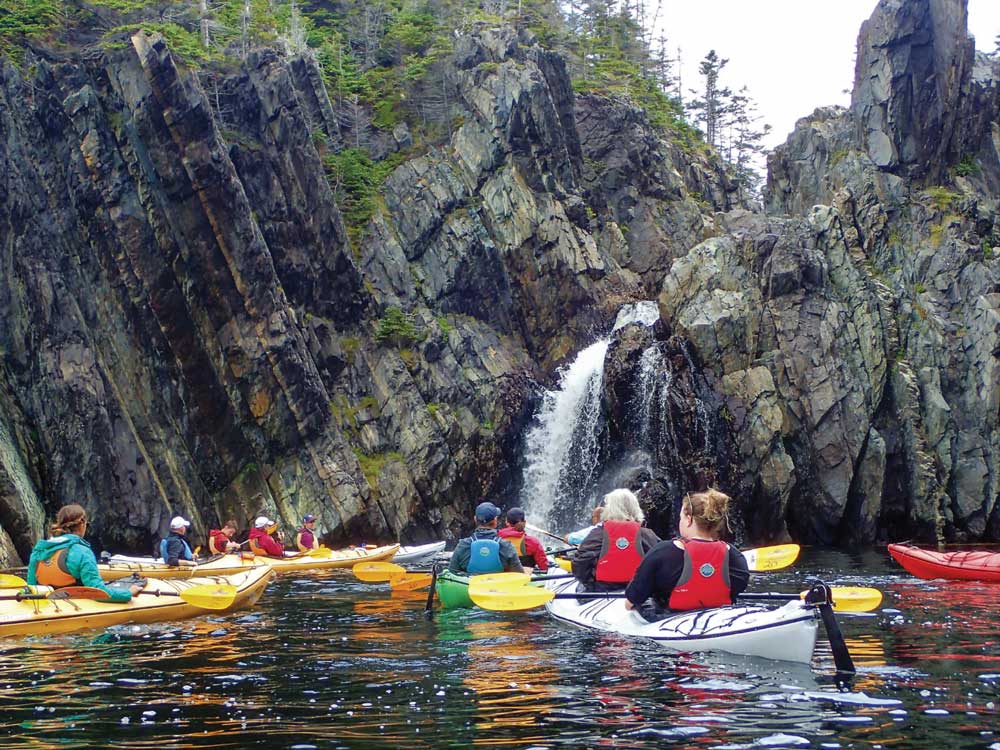 The next day, we pick up our motorhome and head south on Highway 3/10 to Cape Broyle. This is the Irish Loop, named for Newfoundland’s Irish immigrants.

We wend through hills populated with thick boreal forest and tiny fishing villages nestled around rocky coves and pint-sized harbors. Most of these small towns have fewer than a dozen homes with the occasional store, gallery or bed and breakfast.

Water is a major theme in Newfoundland. It’s surrounded by water and the boggy land is studded with rivers and ponds ranging from the size of a small car to dozens of acres. The water table is so high that telephone poles are supported by rock piles.

In Cape Broyle, we’re scheduled for a tour with Stan Cook Sea Kayak Adventures (www.stancook.ca). After being outfitted with flotation devices and sea skirts, 16 of us scramble aboard double kayaks and follow Stan Jr. and two other guides into the harbor. Stan paddles along the shoreline, pointing out crabs, sea stars, waterfalls and sea caves. As we slip farther and farther toward the Atlantic, the swells strengthen, and we ride up one side and down the other.

Getting There: Although the author chose to fly into Saint John’s and rent a motorhome from Islander RV, visitors to Newfoundland have another option: take a ferry from North Sydney, Nova Scotia, to either Port aux Basques or Argentia, the latter of which is a 90-minute drive from St. John’s.

My arms are beginning to burn at the 4-mile mark when Stan shouts, “Whales!”

I spot first one spout, then another. A mother humpback and her calf are making their way up the harbor. We see a sleek black back; then another; and a tail fluke. My heart is pounding as we paddle toward the big creatures.

Just feet from our kayak, the mother surfaces, her back arching out of the water. She sends up a massive water spray. The whale is so close I hear her breathe and then, she sings, a long melodious, magical note that rises and falls as she swims past.

Back in the motorhome, we pass La Manche Provincial Park. RV campgrounds are limited in Newfoundland. It’s not unusual to see RVers “gravel pitting” on beaches or in parking lots at visitor centers. Provincial parks are a great choice. This one doesn’t have hookups, but offers 82 forested, gravel-topped sites, a shower house and laundry right next to La Manche Pond.

We stop at the Colony of Avalon, the best-preserved early English Colonial site in North America and an active archaeology dig where visitors can work as archaeologists-for-a-day, or half-day. We tour the small museum and a reconstructed 17th century kitchen where we sample tasty pea soup and bread made over an open hearth.

Just down the road, the UNESCO World Heritage Site Edge of Avalon Interpretive Centre boasts a fascinating exhibit about the oldest fossils of complex multicellular life found anywhere in the world. Scientists have discovered soft-bodied creatures without shells or bones that date back hundreds of millions of years on the exposed headlands of eastern Newfoundland. 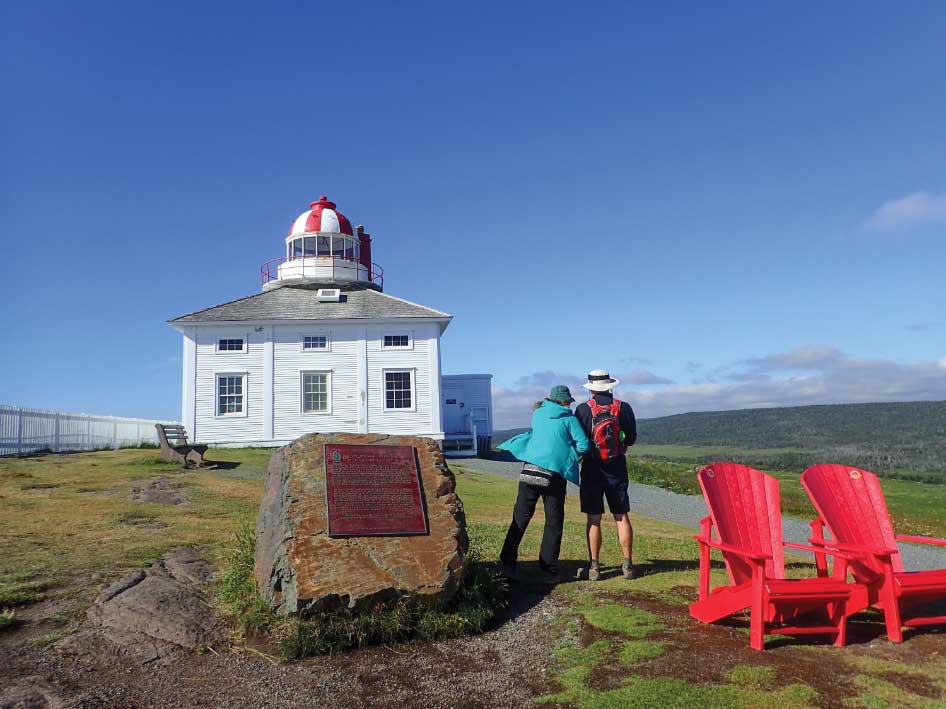 Cape Spear Lighthouse, built in 1836, is the oldest surviving lighthouse in the province.

Since there’s summer light until 10 p.m., we cover plenty of territory. Highway 10 angles inland, winding through green hills, bogs and ponds. At St. Vincent’s Beach, the vista opens to a 180-degree sea view and we spot whale spouts – two, four, eight, a dozen.

It’s here we get up-close-and-personal with those whales along the beach. It’s the second time we’ve encountered 150-ton creatures so close we can almost touch them.

We camp at White Pines Resort RV Park. At $35 Canadian, this tidy park with partial hookups, gravel-topped sites, a shower house and swimming pool is a bargain. We wake to warm weather and brilliant skies, and hop down the road to the Salmonier Nature Park, a free, walk-through wildlife rehabilitation center that showcases moose, mink, Newfoundland marten, owls, eagles and more. After yesterday’s long drive, the accessible 1.6-mile boardwalk eases road kinks. 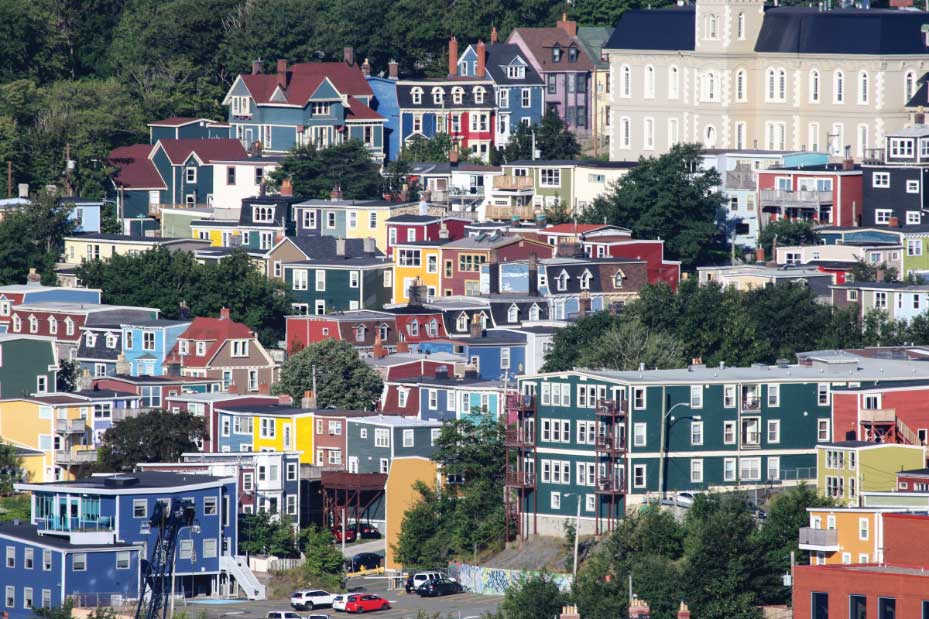 St. John’s is famous for its brightly colored buildings.

We turn onto Highway 230 and motor into Port Rexton, where we’re treated to our first icebergs. Every year, Newfoundland sees several hundred icebergs from the Arctic. May and June are iceberg months, but sometimes as late as July you’ll find them floating like giant ships in bays and coves. A small crowd has gathered on the beach, cameras on hand, to capture the sight of two of these blue-green wonders.

We continue driving north on Highway 230 and then head northeast on Highway 238, a pockmarked bit of asphalt leading to Elliston, a great place to see puffins. We follow signs to Elliston Puffin Site, two giant rocks jutting into the ocean. We walk onto the first rock. Across a 50-foot expanse of water thousands of puffins have dug burrows into the second monolith’s soft dirt.

We join a dozen others armed with binoculars and long lenses snapping photos of these funny little birds. Then, a single puffin flaps his short wings and lands just feet from us. He’s joined by his posing and preening mate.

We stay at Elliston Municipal Park, a grassy spot across from the beach and puffin site. For $20 per night, we snug into a large, back-in site with partial hookups, a picnic table and pounding surf that lulls us to sleep.

With more than 3,000 people, the town of Bonavista is much larger than Avalon’s fishing villages. We grab eggs and tasty fish cakes for breakfast and, under cool but sunny skies, wander the docks shooting photos of lobster boats.

At Cape Bonavista Lighthouse Provincial Historic Site, we tour the squat 1843 lighthouse/keeper’s quarters. The waters and many inlets around Newfoundland are treacherous for mariners, and lighthouses save many vessels. Our guide tells us that until 1962, a 200-pound counterweight turned parabolic lights in the 18-foot tower.

We motor along Highway 1, passing miles of boreal forest, ponds, lakes and fishing villages. In Twillingate, we overnight at beautiful Peyton’s Woods RV Park, with full- and partial-hookup sites, and wake to mild temperatures and brilliant skies.

Twillingate is famous for icebergs, but locals say: “It’s July. There aren’t supposed to be icebergs.” Fortunately for us, there are several. And wherever ’bergs appear, so do visitors. RVers, many in large motorhomes, ply the narrow, winding roads. Residents don’t seem to mind as we park willy-nilly and scramble up rocks to see these Arctic wonders. 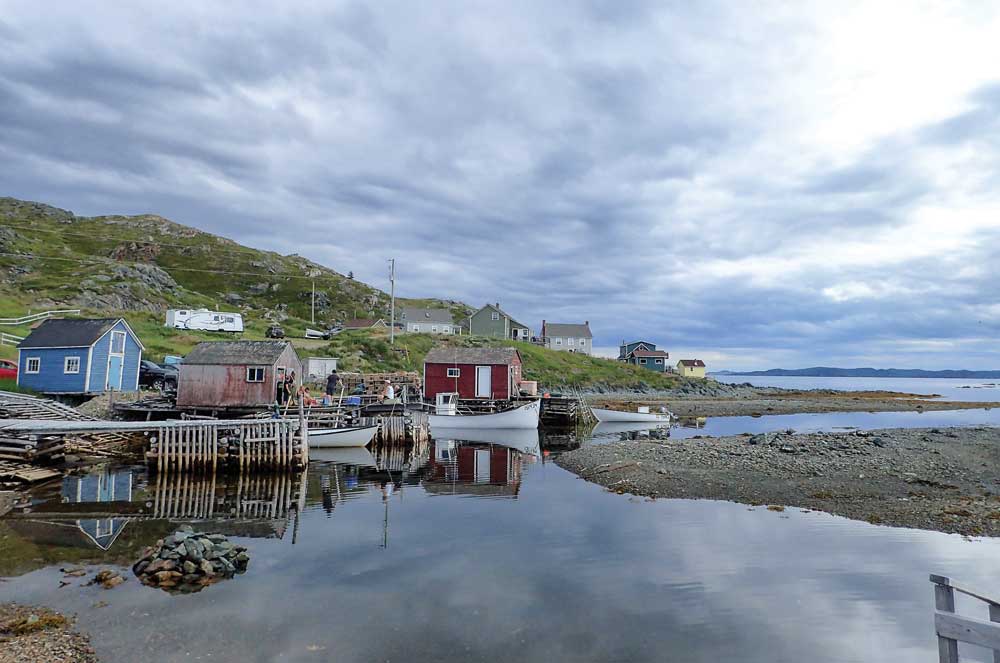 In the afternoon, we meet Crystal Anstey, owner of Experience Twillingate, for a beach “boil up.” She has laid a fire on the sand, with a cooking grate. We stretch out on a quilt and relax while Crystal scoops seawater into a large cooking pot. “Ocean water has the perfect salinity for cooking,” she tells us, pouring glistening black mussels into the water.

A few minutes later, the mussels are cooked, their orange flesh peeking from shells. Crystal dumps the steaming mussels onto a large tray and we eat them out of hand. They’re delicious. Then she adds four huge lobsters to the pot and, when they’re cooked, chops them into pieces. The hot lobster is served with a green salad and crispy French bread.

The lobster is uber-fresh and delicately sweet. As I savor this taste of Newfoundland, I gaze across the water and spot a whale cavorting just offshore. What could be more delicious? 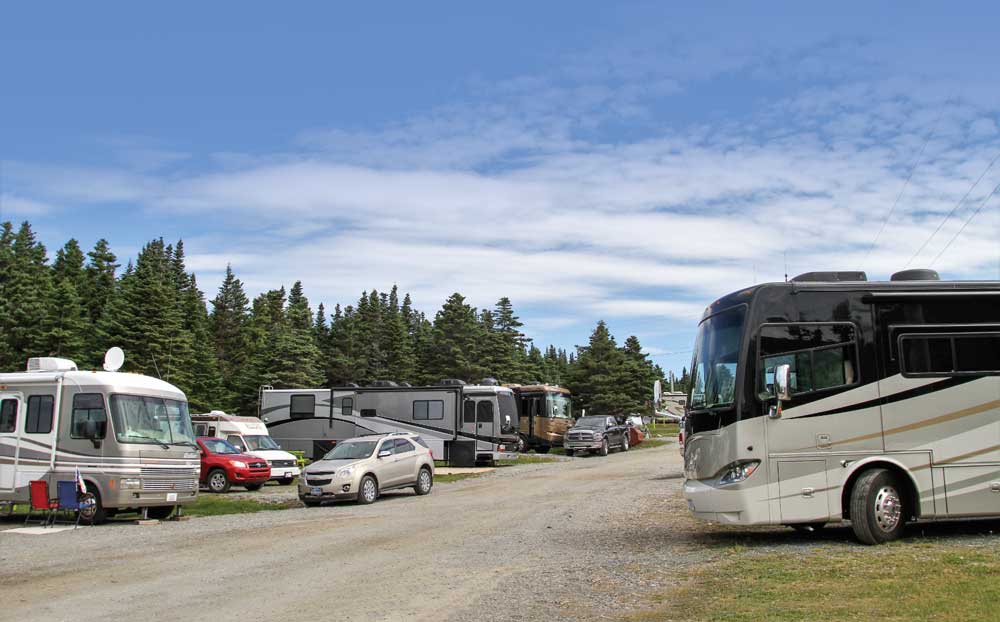