This Hitch-Mounted Gear Rack is Changing the Game

The Chuck Bucket is Designed for Skis, Snowboards, and Other Equipment

They say that necessity is the mother of invention. Such was the case for Charles McNall, who grew increasingly exasperated with loading and unloading his family’s skis and snowboards every time they hit the slopes. Using a roof rack on his vehicle to transport their gear provided more space inside their car, but it resulted in a lot of lost time in the ski resort’s parking lot at the beginning and the end of the day. Time that could be better spent getting in more runs.

As an engineer who designs medical equipment by trade, McNall knew that there had to be a faster and more convenient way to access the family’s gear. So, he went to work on creating an alternative option that would save time and eliminate frustration. The result is the Chuck Bucket, a hitch-mounted solution that promises to be a game-changer for skiers and snowboarders. 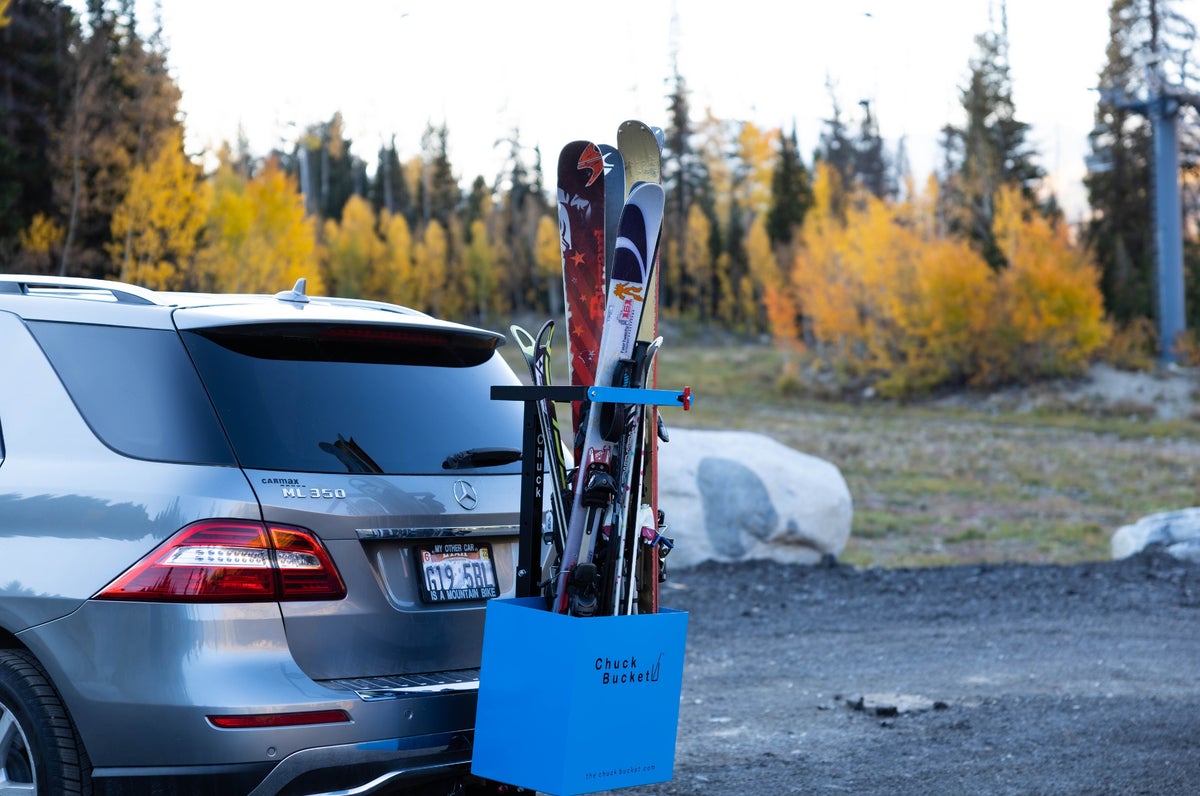 The Chuck Bucket was designed to make accessing skis and snowboards as quick and painless as possible. That starts with moving the rack off the vehicle’s roof and attaching it to a trailer hitch at the rear instead. From there, the gear can be accessed in seconds without requiring multiple trips up and down the side of the van, truck, or SUV.

The other unique element to the Chuck Bucket’s design is the “bucket” itself. The bottom of the gear rack includes an 18-inch tall aluminum container with a wide opening at the top. Skiers and snowboarders simply stand their skis and snowboards up inside the bucket and secure them in place using a durable strap mechanism. A metal arm runs the length of the rack, providing a stable point to lock down not only skis and snowboards but a set of golf clubs, camping gear, a cooler, or other items.

The Chuck Bucket can hold up to eight pairs of skis, four snowboards, or a combination of both. The rack is compatible with a variety of cable lock systems that ensure that its cargo won’t become an easy target for thieves. And when not in use, the entire rack breaks down into a few component pieces for easy storage. 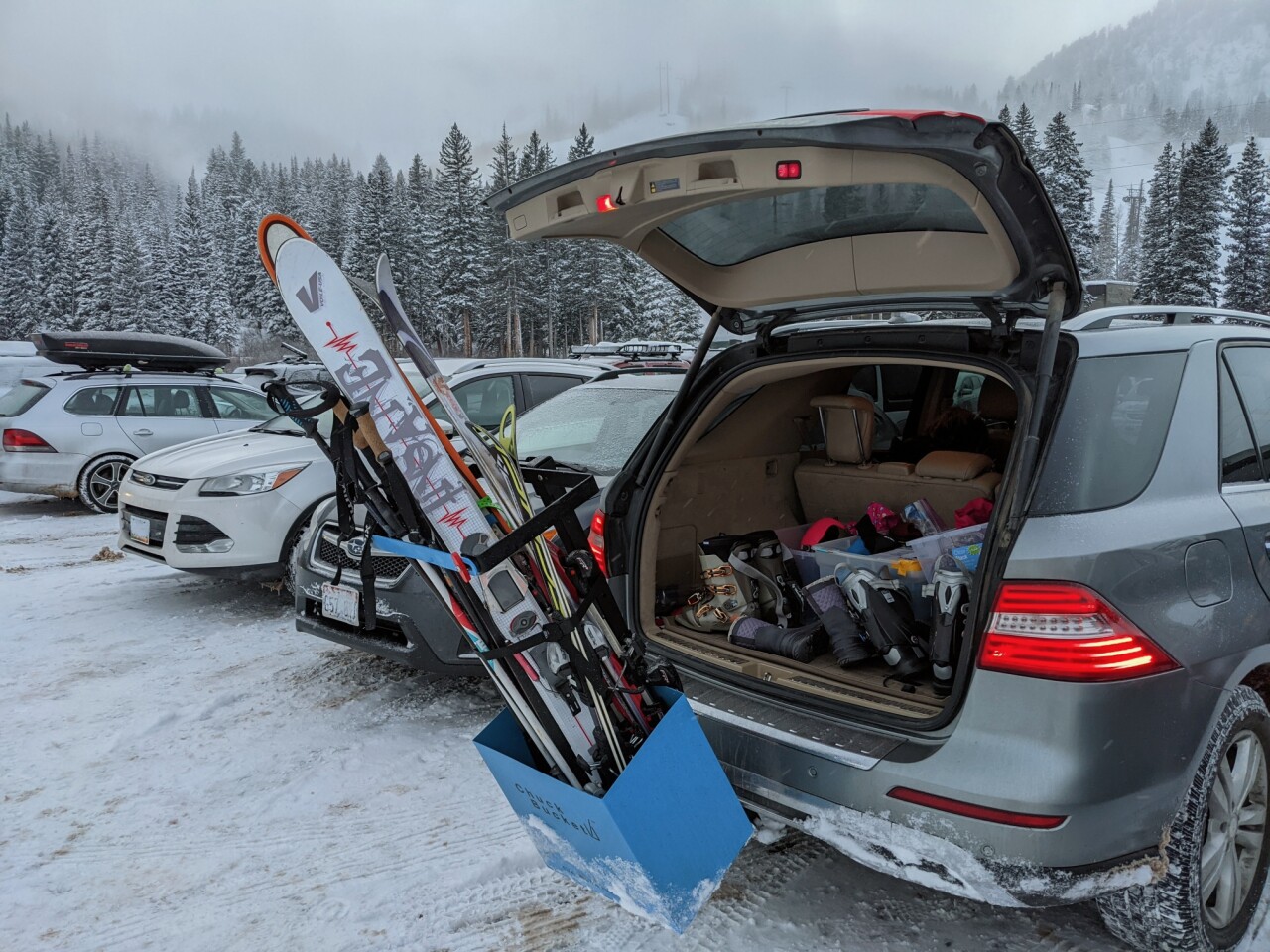 Attaches to the Hitch

When designing the gear rack’s vehicle attachment system, McNall took a few cues from hitch-mounted bike racks, which have been around for years. The Chuck Bucket slides into a two-inch trailer hitch, where it locks into place using a metal pin. A single screw tightens into place, significantly increasing stability and reducing the amount of wobble created while driving. The entire process takes less than a minute, and removal is equally quick and easy.

The Chuck Bucket’s design also includes a hinge mechanism similar to those found on hitch-mounted bike racks. The rotating hinge allows the entire unit to tilt forward at an angle while still attached to the vehicle. This handy feature eliminates the need to remove the gear rack when accessing a car’s trunk or rear cargo area.

The rack’s aluminum bucket includes a special plastic coating that prevents rusting and ensures that the tips of skis stay safe while in transit. Drainage holes in the bottom allow water to flow through, preventing the bucket from filling with water from snowmelt or rain. And because it is mounted relatively close to the ground, it is easy enough for even young skiers and snowboarders to load their equipment themselves. 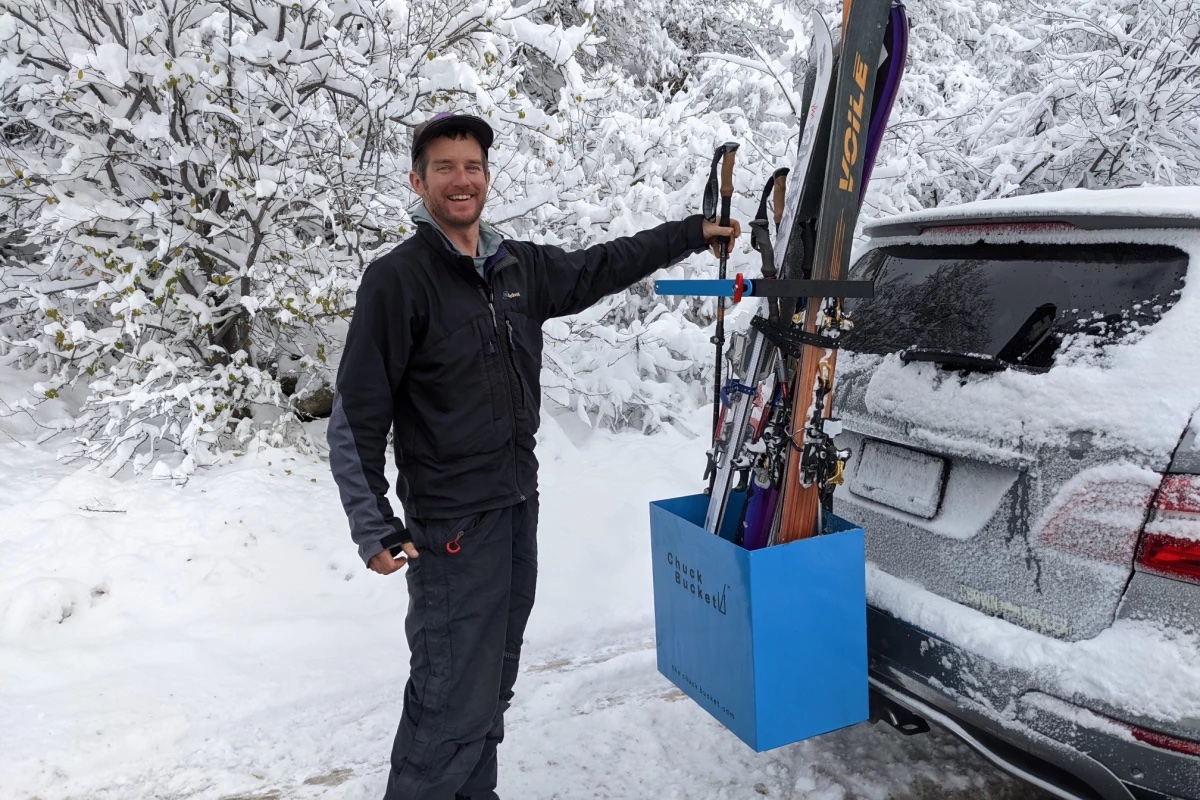 A Success on Kickstarter

The Chuck Bucket launched as a Kickstarter campaign, where it quickly surpassed its $26,400 funding goal. It will now go into production in March 2022 and begin shipping to customers in May. Once available to the general public, the gear rack will have a retail price of $420. However, early-bird Kickstarter backers can preorder one for just $249 while the campaign is active. 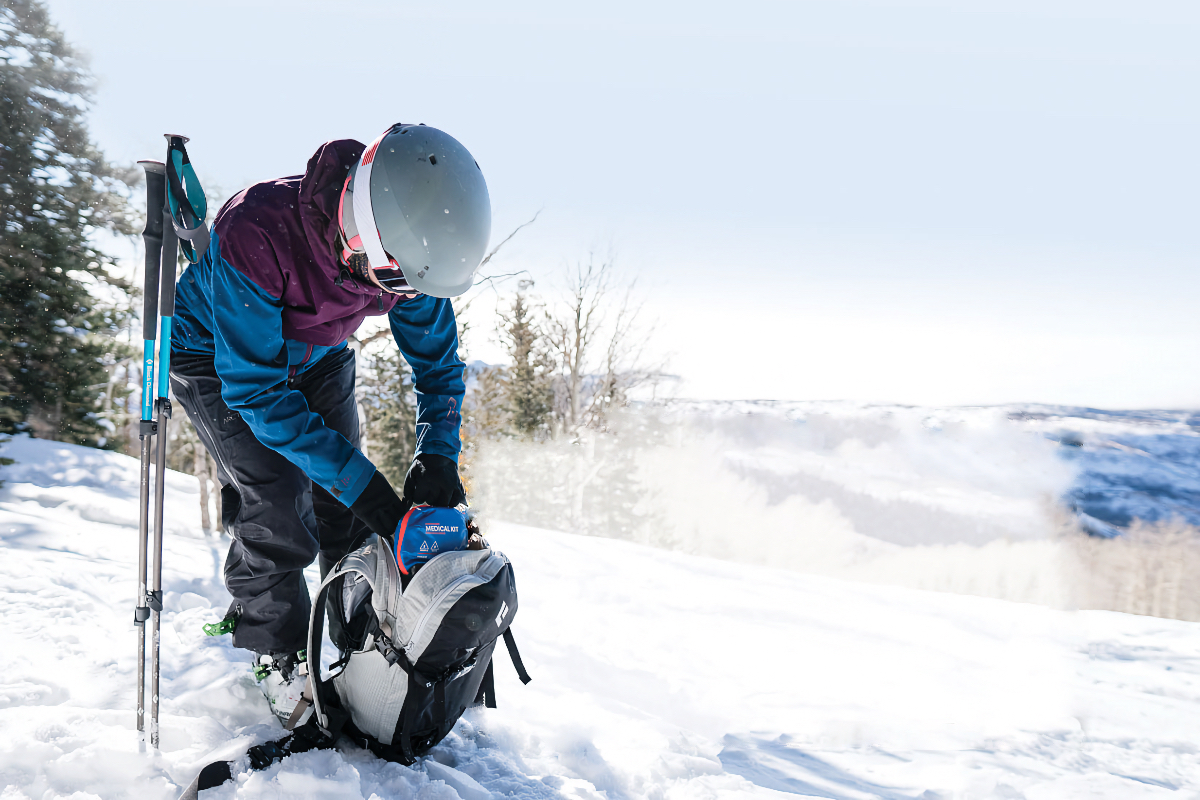 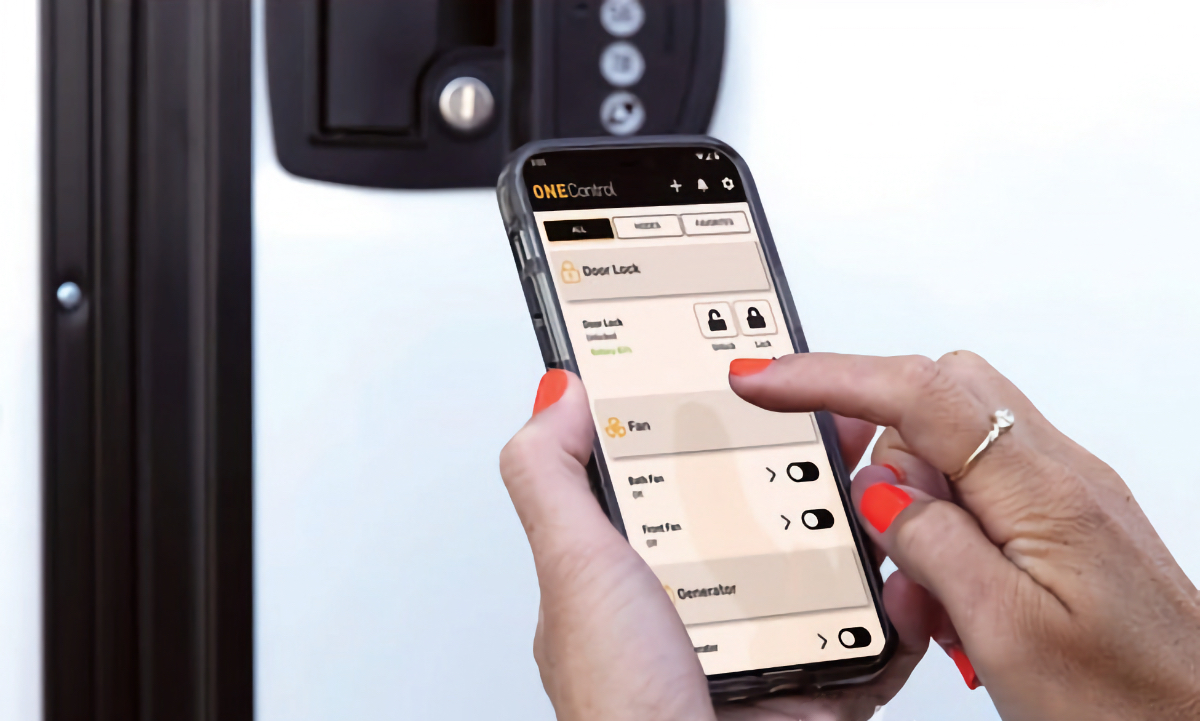 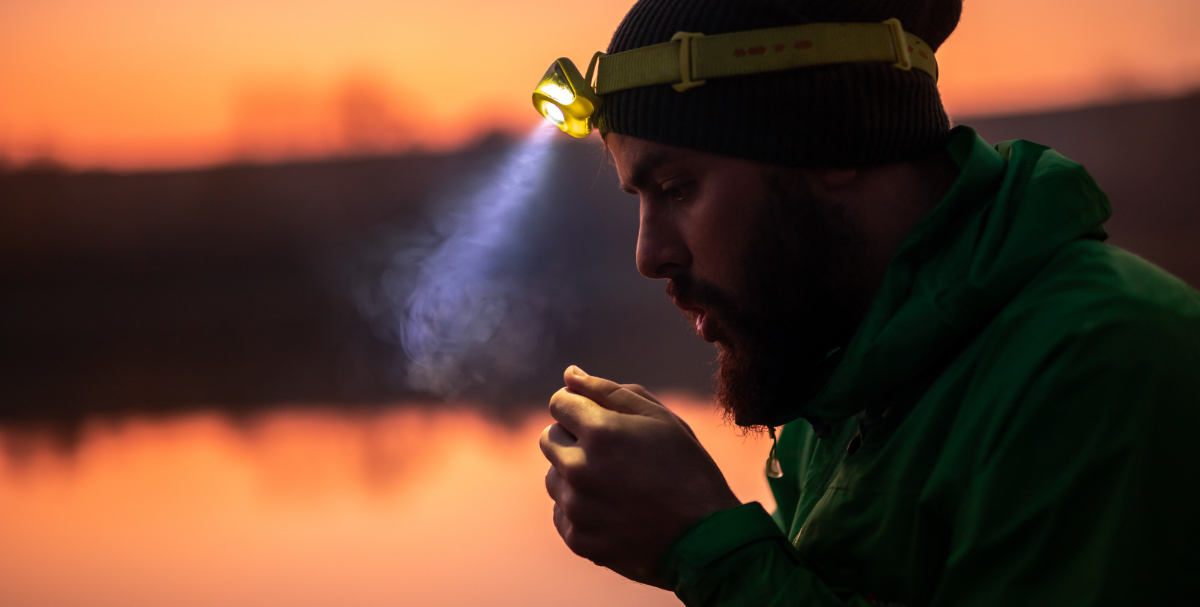 The Best headlamps for RV Camping