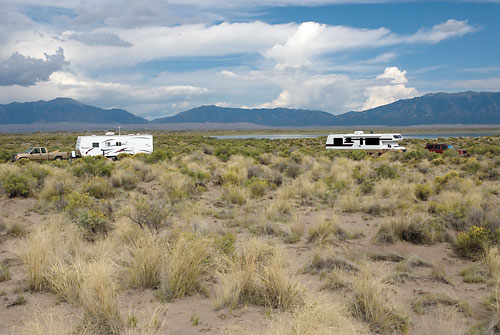 During my 16 years of full-time RV travel, I found many places worthy of a visit. I found the hoodoos of Bryce Canyon National Park, the penguins of Antarctica, the whales of Alaska and Hawaii and Oregon’s rugged coastline. I also found the place that most felt like home. In fact, today it is my home. It is Colorado’s San Luis Valley.

Let me explain. While traveling full-time I found my best friend, my husband, Mike Vining. But when I found Mike, I also had to find a place to live because Mike had too much stuff for full-time travel. That’s when we moved to South Fork, located on the western edge of the San Luis Valley in south-central Colorado.

The San Luis Valley is an awesome place, a humongous high elevation valley with an average height of 7,500 feet. The valley stretches roughly 122 miles from north to south, with Poncha Pass its northernmost point. The southern end of the valley reaches into northern New Mexico. The valley is about 74 miles wide. Amazingly, it is home to fewer than 50,000 people, as well as a stopping over place for thousands of sandhill cranes, and a haven for wildlife.

The Rio Grande River drains the valley, which is nearly surrounded by the Rocky Mountains. There are the Sangre de Cristo Mountains to the east and the San Juan Mountains to the west. We live in the eastern foothills of the San Juans, in the rain shadow of the mighty Rockies. We get snow in the winter, sometimes enough so we can ski from the house
for a month or so, but if we are lacking in snow all we have to do is drive 20 miles southwest to the Wolf Creek Ski Resort. They boast of the most snow in Colorado, with an average of 460 inches a year.

Visitors enjoy our valley because it is easy to explore. Though you will have to travel over mountain passes to get here, once you are here there are no big grades to climb. I’m sure that traveling through the valley today is much different than when the Ute Indians made their home here. And it is much different than in the early-to-mid 1800s when travelers rode or walked the northern branch of the Old Spanish Trail.

We love the valley for many reasons. Some of them include camping, hiking, backpacking, mountain biking, rock climbing, rockhounding, snowshoeing, backcountry skiing and downhill skiing. Though we don’t participate in the following activities, our valley is also a popular place for fishing, hunting, rafting, golfing, horseback riding, ATVing
and snowmobiling.

Bird-watching and photography are also favorite activities for many folks. There are three national wildlife refuges in the valley. Baca NWR is the newest refuge. It and the Alamosa NWR are located closest to the town of Alamosa. Our favorite refuge, the Monte Vista NWR, is located a few miles south of Monte Vista. Its artificially created wetlands (14,804 acres) are home to the largest concentration of migrating sandhill cranes in the valley. In fact, cranes are so plentiful in early March, when more than 20,000 head north from their wintering grounds in New Mexico to their breeding grounds in Montana, that the town offers a sandhill crane festival for young and old alike.

We love exploring our valley. We drive to the eastern side of it to see the sights of the Great Sand Dunes National Park, one of America’s newest national parks. The dunes snuggle up against the west side of the Sangre de Cristo Mountains, a range harboring ten 14,000-foot peaks. The massive dunes found here are the tallest in North America.

Visit the sand dunes and you’ll want to explore the region nearest the dunes, too. In fact, there’s a good view of the sand dunes from San Luis State Park and Wildlife Area. Camping is available here and at the national park. Both places are certainly worthy of a visit.

Also, I highly recommend a visit to Fort Garland, built in 1858. The adobe complex was built in plaza form, typical of the Culebra villages to the south. Memorabilia on display include items from the Civil War, from Kit Carson, and from the famed Ninth Cavalry Buffalo Soldiers. The museum is a favorite anytime of the year, but it’s especially fun to visit around Memorial Day when there is a military reenactment.

South of Fort Garland you’ll find the small town of San Luis, a place with special recognition as it is the oldest town in Colorado. Officially designated on April 5, 1851, it is home to the Stations of the Cross Shrine. The creation of a local sculptor named Huberto Maestas, the 15 bronze statues stand three-quarters to life-size and represent the last hour of Christ’s life to his resurrection. Visitors come from all over the world to see his creations on the mesa above town.

Alamosa is the largest town in our valley. Adams State College and Trinidad Junior College both call Alamosa home, as do a population of nearly 8,000 residents. If you travel north of Alamosa you’ll pass through the tiny community of Hooper. Home of the UFO Watchtower, camp here and you can search for aliens along with your fellow RVers.

Drive to South Fork from Alamosa and you’ll pass through the small towns of Monte Vista and Del Norte. Monte Vista hosts an annual Stampede every summer.

The small town of South Fork is located at the junction of the South Fork Rio Grande River and the main Rio Grande River and is nestled up against the San Juan Mountains. At an elevation of 8,200 feet, it provides access to many outdoor activities. We drive 30 miles to climb at Pentitente Canyon, a world-class rock climbing area. Drive 20 miles in the opposite direction and we’re on top of Wolf Creek Pass with access to trails and a ski resort. Who could ask for more?

Creede is also accessible from South Fork. Located about 20 miles northwest, it is the westernmost town found in the valley. To get there, we drive along the Rio Grande River; at 1,800 miles long, it’s the third longest river in the U.S. Creede is a quaint town set among picturesque cliffs. During the summer, it is a favorite place to see
world-class drama at the Creede Repertory Theater. If you are in town don’t forget to visit the Creede Mining Museum. It’s located underground along with the firehouse and community center.

The San Luis Valley is also home to the highest steam locomotive in the country. Also America’s longest narrow gauge railroad, the Cumbres & Toltec Railroad runs between Antonito, located at the south end of the valley, and Chama, New Mexico. The railway spans 64 miles and steams over the expansive valley before traveling over the South San Juans and down to Chama.

In addition to the Cumbres & Toltec, there’s the Rio Grande Scenic Railroad, the newest railroad in the valley. Two trains depart from Alamosa. The Toltec Gorge Limited makes the round-trip from Alamosa to Antonito and offers a unique way to get to the historic Cumbres & Toltec train in Antonito. But the most scenic adventure aboard the San Luis Express heads east from Alamosa and crosses the Sangre de Cristo Mountains en route to the quaint town of La Veta.

If you’re heading to the train in Antonito, you’re bound to pass through Manassa, home of the Jack Dempsey Museum. Visitors will find artifacts housed in the cabin where one of the world’s greatest heavyweight boxers was born.

Our valley is a potpourri of things to do and places to see. In addition to the towns mentioned here, you may want to visit the tiny communities of Villa Grove, Crestone, and Saguache, as well. Do this and you’ll see that the valley is a place that needs lots of exploring. It’s a place to come back to again and again. Do so and you’ll see that there is no place quite like the San Luis Valley.