An epic expanse of lakes, waterfalls and boreal forest, Canada’s secluded Northwest Territories has more than its share of scenic wonders but fewer residents than most visitors’ hometowns

As we passed through Dawson Creek, British Columbia, last summer, an RVer on his way back down the Alaska Highway told me that Alaska was too remote for his tastes and lacks the modern conveniences of the Lower 48. I replied that if he thought Alaska was

remote, he shouldn’t even consider going where we had just been. My wife and I, along with our dachshund, who earned the nickname the Bush Dog on this trip, had just spent seven weeks in Canada’s Northwest Territories and were absolutely enthralled with the pristine lakes, rivers and waterfalls.

A trip to the NWT is certainly not for everyone, but if you have a reliable RV and tow vehicle, and a desire to see some absolutely beautiful countryside in largely uninhabited surroundings, you might just love it as much as we did. With fewer than 44,000 residents in a territory larger than Texas and California combined, the NWT has a lot to see with little chance of traffic congestion or the throngs of people you’ll encounter at other Canadian destinations like Lake Louise and Niagara Falls. Of the territory’s six most-populated communities, five have no more than 4,000 residents. 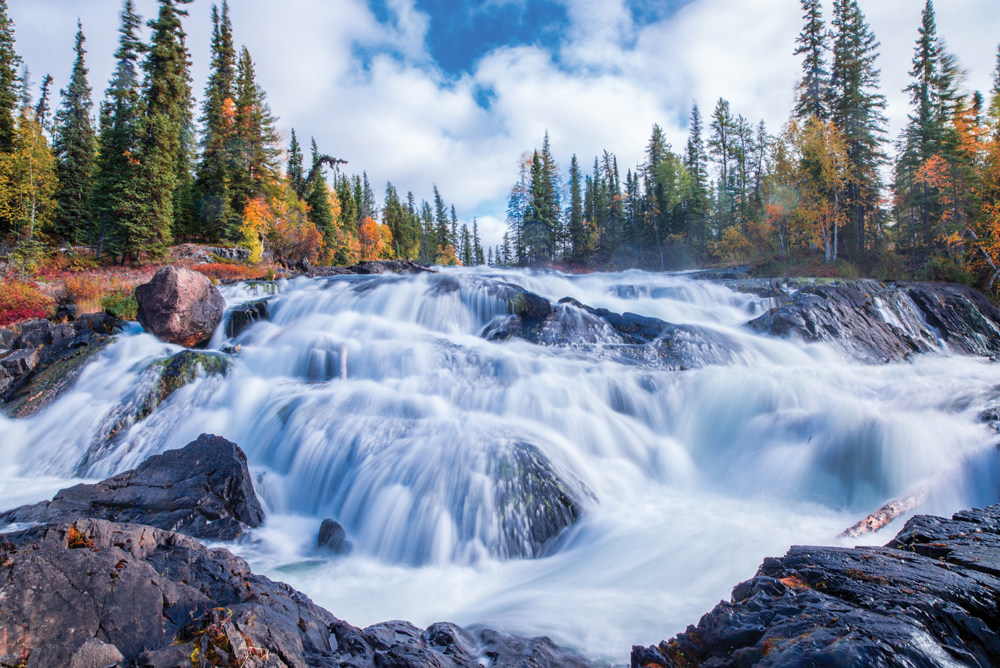 On its way to Great Slave Lake, the Cameron River tumbles 55 feet in a picture-perfect cascade.

We towed our Flagstaff trailer from the Upper Peninsula of Michigan in mid-May and returned home in mid-August. Our northwesterly route took in some nice scenery and stops along the way, as we traveled the Trans-Canada Highway west toward Edmonton. Then we picked up Alberta Highway 43, which ultimately took us to Alberta Highway 35, also known as the Mackenzie Highway.

The Mackenzie Highway is the most traveled route into the territory and has its Mile Zero in Grimshaw, Alberta. From there, towns become fewer and farther between, and when an intrepid RVer reaches Indian Cabins, just before crossing into the NWT, we strongly suggest refueling, because the next pit stop is nearly 100 miles up the highway in Enterprise. For those driving the Alaska Highway, a junction with the Liard Highway, north of Fort Nelson, British Columbia, leads into the territory.

The NWT is vast, and we didn’t come close to seeing it all, but we did manage to visit three of the territory’s five distinct areas, starting with the gateway South Slave region, which stretches from the southern border to Great Slave Lake and includes Wood Buffalo National Park and the towns of Hay River and Fort Smith. The North Slave region contains the East Arm of Great Slave Lake and the capital city of Yellowknife, and the Dehcho region covers the territory’s southwest corner and is home to Nahanni National Park Reserve and the village of Fort Simpson.

Pack your rod and reel on a road trip to the Northwest Territories, a bucket-list destination for freshwater fishing. Many waterways surround the territory’s vast Great Slave Lake, including Vee Lake (above), just outside Yellowknife.

After crossing into the NWT at the 60th parallel and picking up all sorts of valuable tourist information at the visitor center, we headed up the Mackenzie Highway to Twin Falls Gorge Territorial Park to see Alexandra and Louise falls, a pair of large cascades that can be reached from the park’s campground on a trail that follows the west side of the Hay River. The river plunges 114 feet at Louise Falls and then plummets another 105 feet over a wide ridge at the Niagara-like Alexandra Falls.

Our next stop was Fort Smith, headquarters of Wood Buffalo National Park. Canada’s largest national park, Wood Buffalo extends across the NWT’s southern border into northern Alberta and is the only place in Canada where endangered whooping cranes come to nest. American white pelicans pair off on the rocky islands of the Slave River near Fort Smith in their most northerly nesting colony. The hike to view dozens and dozens of the large-billed waterbirds navigating the Class VI rapids is certainly worth the effort.

Beyond bird-watching, Fort Smith is a good place to stock up on groceries, gasoline and souvenirs. Bears and bison are likely to be spotted on late-evening drives along the Fort Smith Highway (Northwest Territories Highway 5)
going west of town.

A side trek on the mostly hard-packed-gravel Fort Resolution Highway (Northwest Territories Highway 6) took us along the Buffalo River, a popular fishing location with a small territorial park. In the hamlet of Fort Resolution, we again filled up with gas and stocked up on supplies before heading to Hay River Territorial Park.

A beautiful place on Great Slave Lake’s Vale Island, at the mouth of the Hay River, the park has sandy beaches next to the 35-site campground. Our campsite was near the lakeshore and surrounded by a natural hedge of wild roses, some of which were 4 and 5 feet tall. 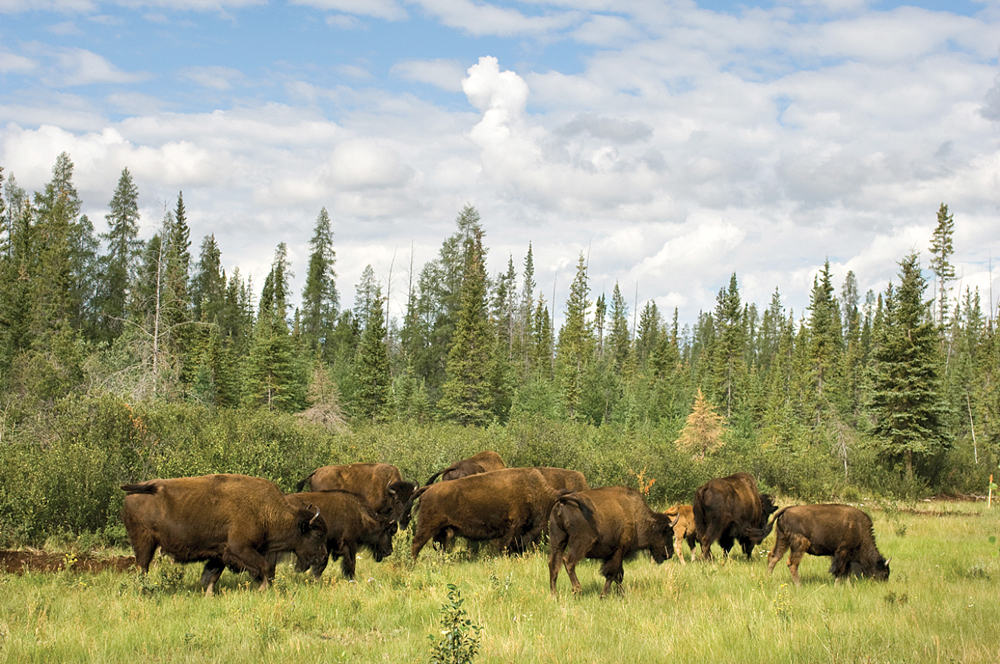 Buffalo Country: One of the best places to see free-roaming bison is along Highway 5 near Fort Smith. Drive cautiously, especially between dusk and dawn.

The adjacent town of Hay River has almost 3,700 residents, which surprisingly makes it the territory’s second largest community. It is large enough to have all of the services a traveler might need including good Internet access at the Centennial Library and a two-screen movie theater.

With nearly 20,000 residents, the NWT’s biggest city by far is Yellowknife, where we spent the next few weeks experiencing the culture of the capital. Yellowknife is cosmopolitan yet friendly, with good restaurants, a couple of shopping centers, an airport, and car and truck dealerships for GM, Ford and Chrysler vehicles. We were in Yellowknife on the July 1 Canada Day holiday, and the town staged a superb parade along Franklin Avenue.

The city is divided into two sections, Old Town and New Town. The New Town section is where most of the downtown businesses are located. The streets of Old Town definitely deserve a visit, with funky eateries such as Bullocks’ Bistro, which serves excellent fish dinners, and the log-cabin Wildcat Café, just down the street from Bullocks’. Several fishing charters are also based in Old Town for those who want to try their luck angling for lake trout, northern pike and arctic grayling.

While staying in Yellowknife, we drove up the Ingraham Trail (Northwest Territories Highway 4), a scenic route that runs north of the city for 43 miles, a third of which is paved, and the remaining miles are hard-packed gravel. Just off the route, a popular hiking trail leads to beautiful Cameron Falls.

We meandered home down the Yellowknife and Mackenzie highways, stopping in the village of Fort Simpson at the confluence of the Mackenzie and Liard rivers. From the Liard Highway, we drove to the Alaska Highway and a turn-off north of Dawson Creek, British Columbia, to see the Kiskatinaw Bridge, the last remaining wooden bridge from the original Alaska Highway that is still in use. It is not much off the main route, and was worth the drive for the view and the history of it.

For adventurous RVers looking to go where not too many have gone before, the Northwest Territories is an ideal destination. We loved it and plan to go back again in 2017. Maybe we’ll see you there.

What to Know Before You Go

As the Scout motto says, “Be Prepared” when traveling into Canada’s far-off Northwest Territories. It is a wild and remote place, and the things you’ve come to expect when RVing are often not to be found at any price. Here are a few tips for the first-time NWT traveler: 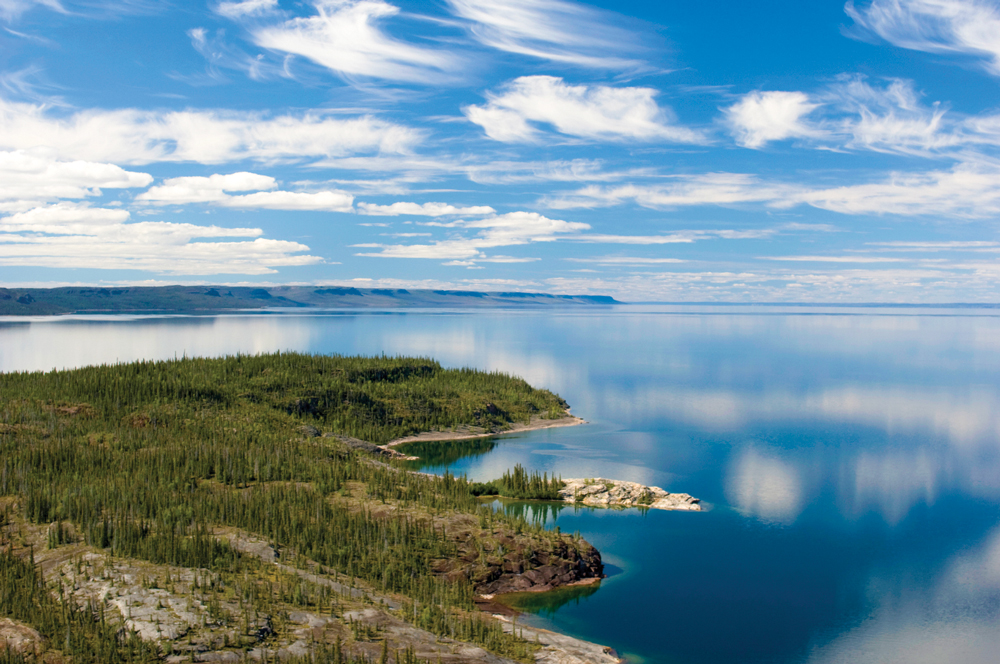 Slated for federal protection as Thaidene Nene National Park in the coming years, the East Arm of Great Slave Lake is a watery wonderland with sandy coves, shallow bays and hundreds of in-flowing creeks.

• Expect to pay more for some items because of the remoteness of the region.
• The costs for routine things like haircuts and oil changes can be surprisingly high.
• Stocking up on groceries is best done in the bigger towns of Yellowknife, Hay River
and Fort Smith, where the selection is good and prices are reasonable.
• Fuel stations are not only few and far between, some stock only regular gasoline,
and no premium or diesel.
• If you’ve been thinking about installing an auxiliary fuel tank, do it before you go.
• If you need a good hardware store, Yellowknife and Hay River are the best bets.
• The fire station in Yellowknife is a good place to fill your RV’s water tank.
• Don’t expect to find RV service centers in the NWT. The only place we saw with
RVs for sale was the Chrysler dealership in Yellowknife.
• Good Sam Roadside Assistance is worth having in case your RV needs to be towed
to a repair center hundreds of miles away.

RVing in the Northwest Territories

Commercial RV parks do not exist in the Northwest Territories. The only real option is to stay at the 16 territorial parks with campgrounds. Run by the government’s Tourism and Parks Division, these are beautiful places with plenty of room for big rigs, but be prepared to power your RV with 30- or 15-amp service at the campgrounds that have electrical hookups or with your own battery power at the ones that do not. Pack containers for carrying water at campgrounds that don’t have water hookups. 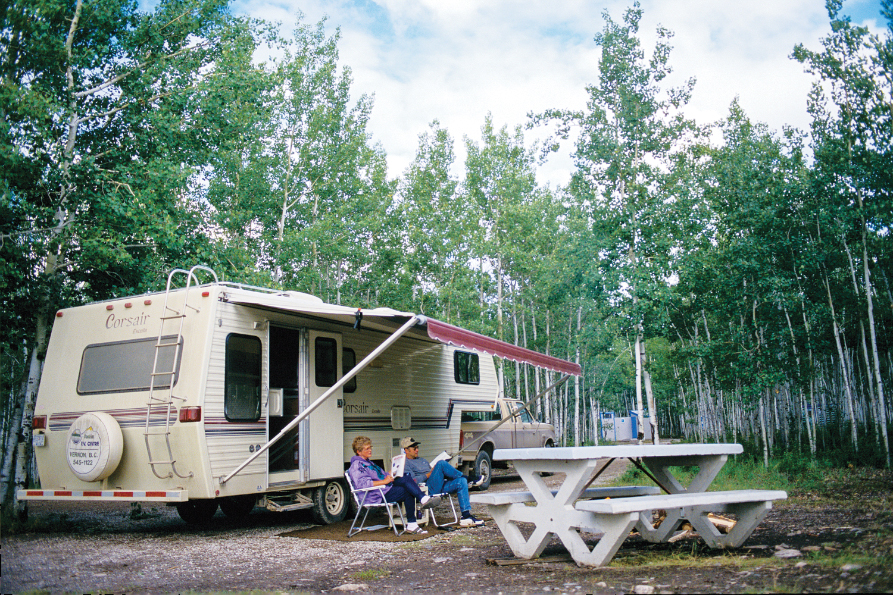 Campgrounds at 16 territorial parks entice RVers to extend their awnings.

The territorial parks have a good online reservation system, and we recommend making reservations for every place you plan to camp. The main reason to reserve ahead of time is because even the smallest towns have events that can fill the campsites at neighboring territorial parks, and there are not a lot of other camping options.

During our trip, we stayed in campgrounds at nine territorial parks including Hay River. Nearly all of the 35 campsites at this lake-side park were pull-throughs with 30-amp service. The only water source was a hose near the gatehouse, but it was adequate for our needs, and there was a dump station on the way out of the park.