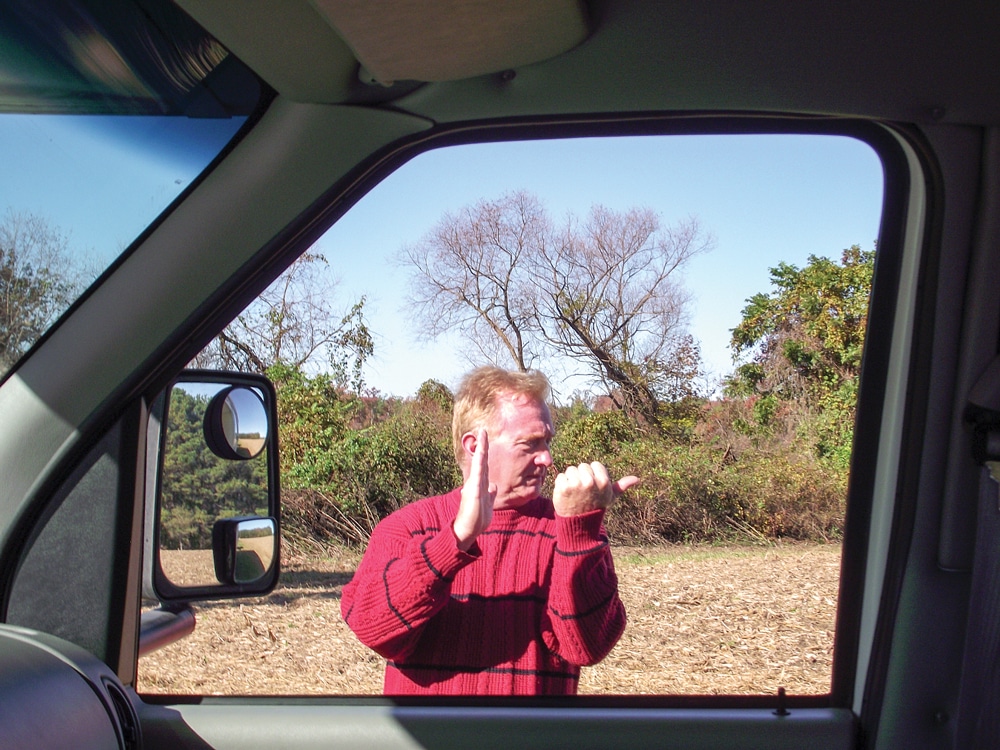 When it comes to maneuvering into tight spaces, hand signals make for happy campers

We pulled in front of our RV site and immediately understood why it was the only vacancy in the otherwise full North Carolina campground. It was a skinny sliver of sand and grass barely wider than our motorhome, bordered on the left by a large fifth-wheel that had every inch of its site occupied by tables, chairs, grills and assorted lawn ornaments. A telephone pole, access road, street sign and utilities crowded the right side, and a wide, scruffy pine took up the rear quarter. Our neighbor came out, eyeing his pink flamingoes a little nervously as I slid into the driver’s seat. My husband, Eric, stood beside the RV and began giving directions as he always does – wordlessly, using hand signals. As I maneuvered slowly, several more couples came out to watch, apparently captivated by the sight of a silent husband and wife. In spite of having an audience, we managed to back in on our first try, and within a few minutes our 30-foot Winnebago Minnie Winnie was nestled snugly between obstacles. As I turned off the engine, I actually heard a smattering of applause.

This is the signal to back up just a foot – important in tight spaces and when leveling the motorhome.

“See, Harry,” I heard one woman say, “I told you that you don’t have to yell all of the time!”

Our docking technique was not always so harmonious. Before we became RV enthusiasts, we were boaters, and our sailing trips invariably began and ended with hurt feelings. Wind, waves and engine noise conspired to make conversation difficult, and raised voices and miscommunication usually resulted. We finally hit on the concept of hand signals, an epiphany that saved my husband from spending his nights sleeping on the sofa. When we bought our motorhome two years ago, we quickly realized that the same kind of scenario was as likely to play out on our “land yacht” as it had on our sailboat.

Many of the campgrounds we visited were designed decades ago with smaller RVs in mind, and state and national parks sites, while more secluded, are often overgrown. This made parking our motorhome every bit as challenging as docking a boat between narrow posts. And while waves and wind may not be a factor in backing a motorhome onto a pad, engine noise, blind spots and distractions are. Modern dashboards often contain myriad useful but noisy electronics, and we often forget that we can turn them off. Have you ever tried backing your motorhome down a windy loop with your spouse shouting directions, the radio playing and the GPS insistently informing you that you need to make a U-turn? And do you remember the moment when you realized that all of it – including your muttered mutinous comments – was captured for posterity on the dashboard webcam? Eliminating unnecessary noise – both electronic and human – makes maneuvering a big rig much less stressful. In addition to making it a habit to turn off all of our toys, we developed a set of hand signals specifically for getting our Winnebago in and out of every possible situation.

Signaling the shift to “park” so that leveling blocks can be safely placed.

We began with the basics. There are three main pieces of information the driver needs to know when his or her visibility is limited or insufficient to maneuver without assistance: whether to go forward or to reverse, right or left, and how far. In our case, I usually take the wheel and my husband provides directions, but it can work either way – the only essential here is that one person is giving directions and one person is following them. As long as nothing is dented in the process, differences of opinion on technique should be saved for discussion over cocktails, when they may be a little easier to swallow.

The guide should position himself where he can be clearly seen by the driver, and should first signal for forward or reverse. To designate a turn, point right or left with one hand to indicate direction, and make a circular motion with the other hand to indicate how far the driver should turn the wheel. To indicate that the driver should straighten the wheel, place both hands straight up and parallel to each other. A single raised palm is, of course, the universal signal for STOP!

Directions for turning the wheel left.

Our motorhome is not self-leveling, and since we have seldom found the “flat, level site” that was advertised in the campground brochure, it usually must be put up on blocks. For this maneuver, the distance that the tires need to move is designated by the space between the guide’s hands, with the understanding that the brake must be applied at the precise moment when the two hands come together. The same signaling technique is used when backing into a site with obstructions or a steep drop-off at the rear. We also have a signal for putting the motorhome in park and another for turning off the engine, and it is only when that final signal is given that conversation resumes.

If you are considering making the switch to silent communication, you may want to modify these hand signals or create a set of your own. As long as the gestures you use are agreed upon by the driver and guide and are easily recognizable in a mirror or at a distance, they will work. And while you may occasionally be tempted to throw in a gesture that is less than appropriate, remember that the goal of using hand signals is to preserve both your motorhome and your relationship. With a little practice, and a lot less shouting, you can end each day as happy campers.