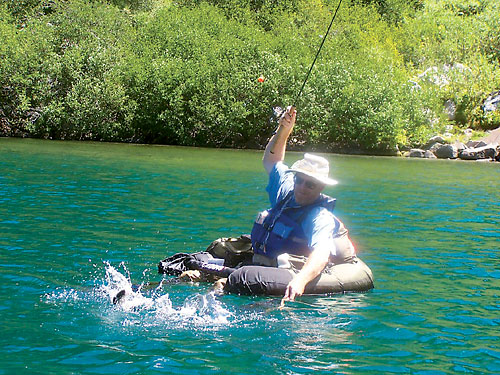 Life’s stresses had been getting to some friends of mine, guys who used to know how to have fun. These adult males had hunkered down in their roles as dutiful contributors to the country’s economy, as loving husbands and doting fathers, yet they had forgotten how to be just men, guys who could leave their responsibilities and obligations behind – if only for
a few hours – to see a movie that wasn’t animated, to eat a meal that wasn’t good for them or simply to enjoy a round of golf. They never put themselves first, and I was worried their capillaries would burst while hustling to yet another pee-wee soccer match.

So I proposed a getaway and called the men-only escape Outpost. With two month’s notice, my buddies should have been able to make the requisite arrangements, yet of the 10 guys I invited – all of whom expressed either a need or a desire to attend – only two could commit. Tentatively.

Our destination was Mammoth Lakes, California, a location in the Eastern Sierra Nevada Mountains that I’ve written about previously but one that cannot receive enough coverage, since active, outdoors-loving RVers would be hard-pressed to find anywhere with as much vigorous fun packed into a more beautiful locale. A private campground sits on the edge of town, and public campgrounds line the banks of the various lakes that recline beneath soaring peaks. Mammoth’s lakes and nearby river can deliver prime trout fishing, and the intrepid members of the Outpost elite planned to ply the local waters, then see what other kinds of adventures arose.

Tom Schlegel who, like Al Bundy, once scored four touchdowns in a single high-school football game, is a fellow writer, and he crossed the Sierras through Yosemite to participate, despite being a less-than-enthusiastic fisherman. Tom, my father and I rented a no-frills fishing boat at Lake George, one of the most scenic places to wet a line I’ve ever seen. Ronald Kluth, a full-time RVer who runs the Lake George boat concession stand, spends his summers in Mammoth and his winters in Texas. His knowledge of the local water and its scaled bounty, however, helped us not a wit, since he didn’t actually give us fishing lessons.

Ronald did, though, come zooming across the lake to chastise a moronic tourist who was harassing a mother black bear and her cubs. The bears had been meandering along the shore, foraging and occasionally splashing deep to pull out a rainbow trout (in the process mocking our hours’-long exercise in angling futility). People fishing from shore gave the bears a wide berth, and then Johnny Braindead decided he needed up-close-and-idiotic photos of the bruins, so he ambled within a few yards of the sow, and she immediately shooed her cubs up a tree. The man, whose one vote counts just as much politically as yours and mine, interpreted the mother’s defensive action as a come-hither gesture, so he hithered. Just then, Ronald pulled his boat within shouting distance of Yogi Boor and let him know that bears that lose their fear of humans and become habituated to their presence eventually have to be put down, and Ronald didn’t want to have to kill another bear. I thought Ronald had his priorities backwards, but what or whom he should shoot became moot once the mother and the two cubs scurried into the brush.

Perhaps it was the interspecies conflict or a wind-gust or a simple misstep on my part, but moments later, while unloading the boat at the dock, I found myself falling. Instinctively I cradled the back of my head so I wouldn’t
crack it on the transom of the boat next to ours, and my left foot plunged to the lakebed, about three feet below the water’s surface. My right leg, however, remained in the boat. The resulting contortion, blood-curdling thwack, shocking cold, throbbing pain and – if memory serves – banshee shrieks combined to let me know that all was not well. Once I had
onfirmed that I still existed, Tom helped untangle me, and I stripped to my bathing suit, then plunged the aching section of my leg – just below the knee – into the cold water. Since you’re reading this, I obviously lived.

David Caplan, a well-known editor on the West Coast, arrived that evening, and the next morning Tom and David hiked and I hobbled the trail that skirts Lake George. We soon reached pristine Crystal Lake, the stunningly clear body of water that shimmers in the bowl formed by Mammoth Crest and the 10,364-foot spire of Crystal Crag.

Tom had to head back to his family, so we said goodbye, then my father and David ventured back into Lake George in a cheap inflatable boat, while I slipped into my waders, then settled into my float tube. As I kicked my fins, slowly propelling myself backwards across the lake toward the inlet where we hoped to find fish, I tossed a spinner a few times. On the fourth cast, my line snagged. I tugged on it, and instead of the four-pound test snapping, my rod did. Since I had now made the required sacrifice to the capricious whims of the fishing gods, I caught two trout within minutes, despite my 5-foot rod now being only four feet long. A few minutes later, since someone had thoughtlessly left a McDonald’s Happy Meal on a dock, we watched a different bear feast upon it. But perhaps he couldn’t catch fish, either.

The next day, however, my father and I decided to try our luck (since skill seemed beyond us) on the Owens River, southeast of town. As we carefully maneuvered among the cows and their droppings, a Fish & Game truck dumped
2,000 shiny rainbows nearly at our feet. We tied on reddish Thomas Buoyants, then together caught 10 fish in mere minutes.

The hairline fracture in my leg seemed a small price to pay for the good times generated by Outpost.