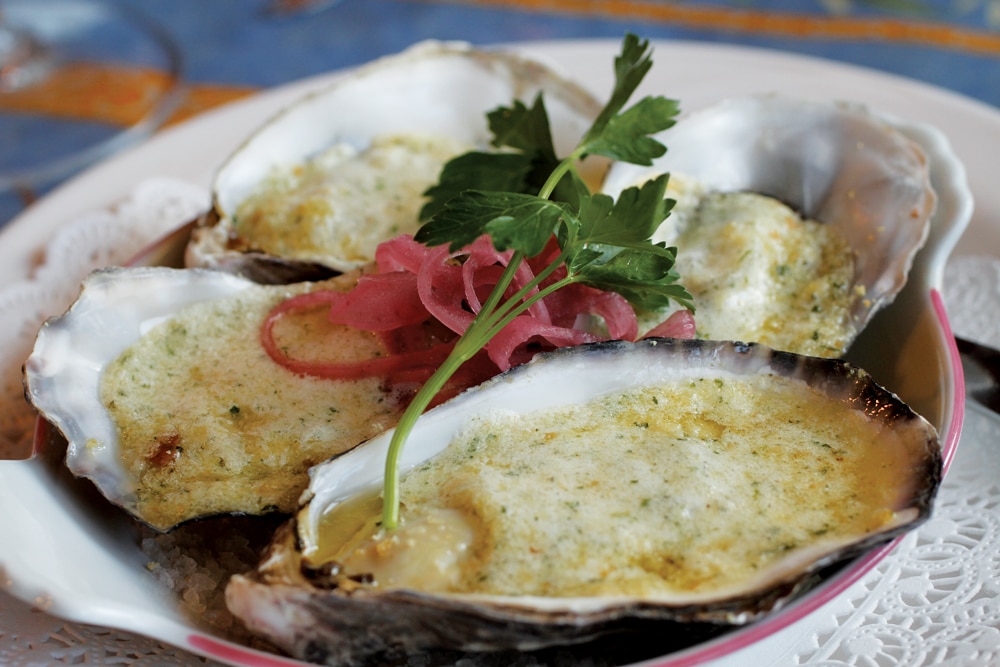 You either love them or hate them. Oysters. Those gnarly-shelled bivalves generate strong reactions, from devotees waxing poetic about the best varieties to those who can’t stomach the squishy, slightly slimy creatures. I was in the latter camp for years. I couldn’t understand why people paid $1 or more per oyster to eat them raw. Yuck!

However, I loved the idea of oysters. Big platters of ice artfully displaying oysters on the half-shell look so impressive. And oysters are great for the planet. These little filter feeders draw water over their gills, bringing plankton and other particles into their bodies where they’re digested and the waste excreted. A single oyster can filter and clean 1.3 gallons of water per hour. Historically, native oysters filtered the entire volume of Chesapeake Bay every three or four days.

Additionally, oysters can be farmed without causing environmental damage. In fact, oyster farms actually clean up waterways. Oysters are a keystone species that create habitat for creatures like anemones, barnacles and hooked mussels that feed larger fish like striped bass. In fact, an oyster reef can increase the surface area of a flat sea bottom by as much as 50 times, increasing biodiversity.

But I wasn’t convinced until I actually ate an oyster dish that tasted great. At Jimella & Nanci’s Market Cafe in Ocean Park, Wash., the Italian baked oysters were rich, creamy, buttery and absolutely delicious. Chef Jimella Lucas convinced me to try her oysters on the half-shell, ice cold medium-sized mollusks served with lemon wedges and slightly spicy red sauce. According to Lucas, oysters must be impeccably fresh and she owns her own oyster bed at nearby Willapa Bay. The oysters tasted fresh and slightly briny, with a delicious tang of the sea. At last, I was an oyster convert.

Now I even carry an oyster knife in the motorhome. I order oysters in chilly months when waters are coldest and oysters are at their best. I don’t buy oysters where they don’t grow naturally. Oregon and Washington and the New England states all produce terrific oysters.

I’ve learned all oysters aren’t the same. There are tiny, delicate oysters like the native Olympia oyster and giant, meaty ones like the Pacifics and everything in between. Like good wine, oysters reflect their terroir – the climate and the water’s salinity, clarity, minerals, etc., that affect the oyster flavor and texture. I like medium-to-small oysters with a delicate flavor.

Here are a few of my favorite places for oysters:

The Place Restaurant & Bar, Friday Harbor, Wash., www.theplacefridayharbor.com. Its oysters on the half shell are deliciously briny. They also bake oysters with hazelnut butter that are rich and creamy.

Union Oyster House, Boston, Mass., www.unionoysterhouse.com. The oldest restaurant in continuous service in the nation serves local, delicate Blue Point Oysters. Its Oysters Rockefeller, made with spinach and cheese, is silky and decadent.

Until next month, happy eating!