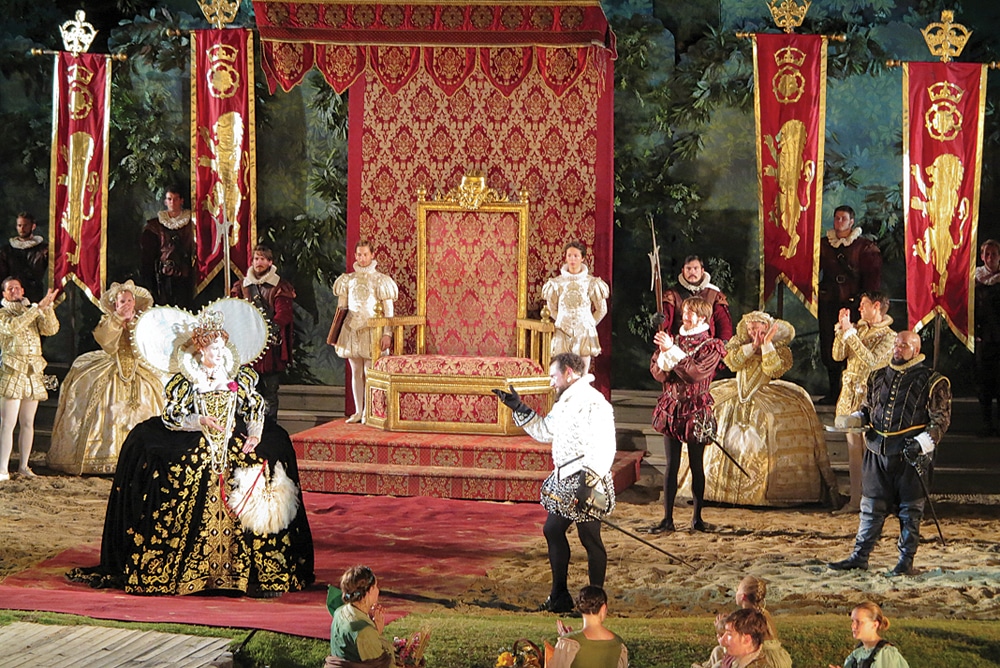 In an increasingly intrusive modern world full of thumping car stereos, inane reality TV stars and pesky telemarketers, I often find myself daydreaming of being stranded on the tranquil shores of some uninhabited island. Now, as the 24-foot skiff that’s just deposited me and my family on this lonely beach disappears from view, I realize that I’ve just gotten my wish.

As we begin ambling along through the gentle surf, it slowly dawns on me that I’m not the only one who indulges in these secret desert island fantasies. From Robinson Crusoe to the reality game show “Survivor,” you don’t have to look far to find examples of how this notion has become an enduring part of popular culture.

By the time the same small ferry returned to pick us up later that afternoon, the experience had taught me something else, something I think few folks harboring similar desires may ever realize: In short, North Carolina’s Outer Banks Scenic Byway is one of the rare places in this country where anyone can turn their castaway daydreams into reality.

Robinson, Eat Your Heart Out

With our “Scenic Route Series” cele-brating the Twentieth Anniversary of the National Scenic Byways Program in 2012 (www.byways.org), we hope to encourage you to leave the interstates behind and experience life in the slow lane. In this case, that detour will bring you to a largely unpeopled landscape where you and yours can get “lost” on what feels like a deserted island.

The Lost Colony tells the story of the mysterious disappearance of the first English settlers in the United States.

Stretching along the North Carolina coast from Beaufort to Manteo, it’s possible to travel the 138-mile length of the Outer Banks Scenic Byway in a single day. From personal experience, though, I can tell you that taking that approach would mean you’d miss many of the most inspiring views of empty beaches, historic seaports and stately lighthouses along the way, to say nothing of the fascinating history of this area, from the legendary pirates to dramatic rescues of shipwrecked sailors.

What’s more, this castaway adventure is also ideally suited to RV travel. Call me spoiled but, as far as I’m concerned, being able to have my fill of this Robinson Crusoe experience and still come home to our air-conditioned 37-foot Kodiak trailer—complete with a well-stocked fridge and comfy beds—is really the only way to be marooned.

Lost But Not Forgotten

When it comes to being stranded on the Outer Bank’s sandy shores—intentionally or not—we certainly weren’t alone. In fact, the first English settlement in North America put down roots near here on the northern tip of Roanoke Island in 1585.

To learn the story of those 117 colonists—and their mysterious disappearance—we headed to the waterfront amphitheater at the Fort Raleigh National Historic Site for The Lost Colony (252-473-6000, www.thelostcolony.org), an open-air drama that’s been staged here for more than 75 years. Performed on the site of the settlement near Manteo, the play tells the story of the trials and tribulations these early settlers faced with elaborate costumes and impressive special effects. Arriving early to enjoy the al fresco dinner we packed and the show’s backstage tour added greatly to our enjoyment.

While no one knows the exact fate of those colonists, there’s an extensive record of many others who’ve landed on these sandy shores. To learn more we spent several afternoons wandering through two of North Carolina’s excellent state-run maritime museums.

The Graveyard of the Atlantic Museum (252-986-2995, www.graveyardofthe atlantic.com) next to the ferry docks in Hatteras tells the story of the hundreds of sailing vessels and steamers that have fallen victim to the strong currents and tricky shoals that give the waters offshore their ominous nickname. The branch of the state maritime museum in Beaufort (252-728-7317, www.ncmaritimemuseums.com/beaufort.html) gave us a firsthand look at another era of the Outer Banks’ colorful history, in the form of the many artifacts raised from the Queen Anne’s Revenge, flagship of notorious pirate Edward Teach—better known as Blackbeard—which ran aground nearby in 1718.

Once home to commercial fishermen and boat builders, Harkers Island is now the place to catch the small ferries that deliver passengers to the beaches of Shackleford Banks and Cape Lookout Lighthouse.

Even though pirates haven’t plied these waters for 300 years, there’s still plenty of treasure to be had on the beaches of the Outer Banks Scenic Byway. Heading north out of Beaufort we made a detour to Harkers Island, located just west of the Cape Lookout National Seashore (252-728-2250, www.nps.gov/calo). While most visitors come here to catch a ride on one of the many small ferries that provide the only access to the historic Cape Lookout Lighthouse, we charted a slightly different course in search of some of the area’s more reclusive inhabitants.

No one knows for sure where the 100-plus wild horses that make the nine-mile-long island known as Shackleford Banks home came from, though it’s widely assumed they’re descended from Spanish mustangs that washed up on these shores centuries ago after a shipwreck. While the horses can be hard to find, we were lucky enough to stumble upon a small band just minutes after hopping off the ferry that dropped us on the beach.

We spent the next three hours admiring the herd as the horses slowly munched their way through the patches of native grasses that sustain them. That is, when we weren’t being distracted by the seashells littering the beach in quantities that would put any seaside curio shop to shame.

Squeezing our 60-foot rig onto the North Carolina ferries was easier than we expected.

Though we knew our experience on Shackleford Banks would be hard to top, we bravely pushed north to Cedar Island to catch the first of two ferries that would take us to the low barrier islands that make up the Cape Hatteras National Seashore (252-473-2111, www.nps.gov/caha). While our rig is big enough that I generally think twice about squeezing it into tight spaces, the deckhands on the 220-foot Swan Quarter guided us onto the ship without anyone breaking a sweat.

The fact that 15-mile-long Ocracoke Island has no road access made taking the ferry a necessity, but the two-hour ride across Pamlico Sound turned out to be a treat in itself. The ship’s second level offered clean, comfortable (and blessedly air-conditioned) public spaces with booths where we enjoyed a picnic, while the outdoor decks provided a sunny spot to watch the constant parade of passing shrimp boats.

After disembarking at the docks in the quaint village of Ocracoke, we took time to poke around in some of the local shops like Teach’s Hole (252-928-1718, www.teachshole.com), purveyor of all sorts of pirate paraphernalia and home to an interesting Blackbeard exhibit. The need to catch the next ferry meant we didn’t have time to explore the trail to Springer’s Point, one of Edward Teach’s favorite anchorages and the place where, outnumbered by sailors from the Royal Navy, the infamous pirate quite literally lost his head.

Both the Cape Hatteras Lighthouse and its keeper’s quarters were moved a half-mile inland in 1999.

A 40-minute ferry ride carried us, and our rig, from the northern tip of Ocracoke to Hatteras Island, the most developed of the barrier islands along the Outer Banks Scenic Byway. More than 50 miles long, this narrow spit of sand is home to a number of small communities that offer some of the more useful trappings of modern life, including a greater selection of RV parks, restaurants, stores and gas stations. That said, there’s still plenty to appeal to those looking to ditch civilization for awhile, including Cape Hatteras National Seashore’s miles of empty, unspoiled beaches that lie hidden on the other side of the tall
sea-oat-studded dunes lining the ocean side of Highway 12.

The first rays of morning sun break on the Cape Hatteras Lighthouse.

To get a bird’s-eye view of this portion of the Outer Banks, we headed for the Cape Hatteras Lighthouse. Built in 1870 to warn vessels of the treacherous waters of Diamond Shoals, the 20-story black-and-white-striped lighthouse — the tallest in the United States — offers an unparalleled panorama of the Atlantic Ocean, Pamlico Sound and the mile-wide island itself. While our teenage son, Schuyler, sprinted to the top of the lighthouse, I contemplated what it took to move this massive brick structure more than a half-mile inland after decades of coastal erosion threatened to undermine its foundation.

Lighthouse aficionados will be glad to know that the Cape Hatteras light is just one of four such beacons located along the Outer Banks Scenic Byway. These structures were the first line of defense for mariners trying to navigate the treacherous waters offshore.

For those not fortunate enough to steer clear of the shoals, the men of Rodanthe’s Chicamacomico Life-Saving Station (252-987-1552, www.chicama comico.net), were standing by to come to their aid. Part of the U.S. Life-Saving Service, the lookouts in their rooftop perch scanned the horizon for ships that had run into difficulty rounding Cape Hatteras. When trouble was spotted, the crews would launch their small boats into the pounding surf and row out to rescue the sailors as their ships began to break apart in the howling gales and frigid waves.

Touring the small museum, climbing to the top of the station’s lookout platform and watching the weekly Beach Apparatus Drill using the same heavy equipment those original surfmen repeatedly wrestled down to the water’s edge was impressive enough. Imagining them accomplishing these superhuman feats in the middle of a cold, dark winter’s night while being pelted with wind-driven sand and spray was nothing less than mind-boggling.

The fact that we never needed actual rescuing made being temporarily marooned along North Carolina’s Outer Banks Scenic Byway all the more enjoyable. Ultimately though, after a week here, we heard the call of open road and left our desert island paradise behind as we set off in search of other equally compelling adventures we knew were waiting for us along The Scenic Route.

Exploring the Outer Banks Scenic Byway is a relatively straightforward affair. Traveling from the south as we did, pick up U.S. Route 70 near the port of Beaufort and follow it north to the Cedar Island ferry landing. At the end of the two-hour ferry ride to Ocracoke Island, you’ll find yourself on North Carolina Highway 12 which, after another 40-minute ferry ride from Ocracoke to Hatteras, takes you all the way up to the byway’s northern terminus at the intersection of U.S. Route 64 to Manteo. Most turns, including the detour to Harkers Island, are well marked, but you can find more detailed directions online at www.byways.org. Ferry schedules and fare information can be found at www.ncdot.gov/ferry or by calling 800-293-3779.

Because grocery stores and fuel stations can be scarce along much of the route, it’s a good idea to stock up and top off in Morehead City or Beaufort or in one of the small towns on Hatteras Island. These places are also your best bet for full-service RV parks. Here are three RV-friendly campgrounds we can recommend based on our experiences: