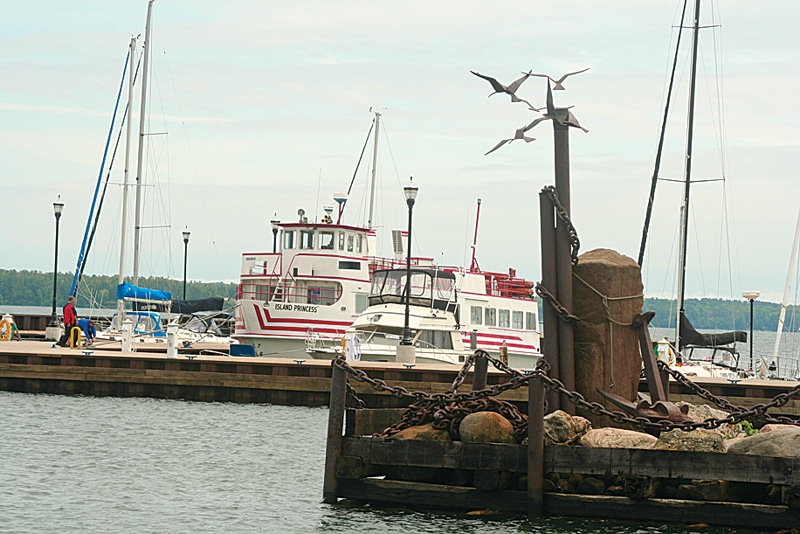 “Lake Superior, which we share with Canada, is the largest freshwater lake in the world. It covers 31,700 square miles and contains half of the water held by all five of the Great Lakes. If all of its water were to spill out, everybody in North, Central and South America would be in water over their ankles.”

Dave Strzok tells me this while we look out at the lake, its surface whipped raw by gale-force winds. We are safely out of the weather behind the glass doors of the Bayfield Maritime Museum. Strzok is the director of the museum and a life-long resident of the lake’s southern shore in Northern Wisconsin.

“Considering the immensity of Lake Superior, 360 miles across, it has few islands. What there are — the 22 Apostle Islands — are here off Bayfield. In 1970 a portion of our shoreline and 20 of those islands were designated as a National Lake Shoreline. So it’s now part of the National Park Service, 43,000 island-acres, spread over 600 square miles of Lake Superior,” continues Strzok.

From where we stood, we could see the car ferry, bucking the white-capped waves, plowing its way to Madeline Island. It’s normally a 20-minute run. But Strzok doubted it would stay on schedule today.

The largest of the Apostles, Madeline Island is not included in the park as it was populated long before the park was created. It has both a state and a town park with lake-access campgrounds.

Looking over the ports of Lake Superior, one gets the feeling of an ocean in the Midwest.

Anchored close to one of the islands, we could see a giant ore carrier riding low in the water. Loaded with iron ore, probably taken on in Duluth, Minn., she was bound for the locks at Sault St. Marie, Mich., and then on to one of the steel plants along the shores of the lower lakes.

Strzok went on, “It’s rare to see one of (the carriers) seeking shelter in the lee of one of the islands. The lake must be really rough. I am told it costs $10,000 an hour to keep one of those ships sitting idle. Since the loss of the Edmund Fitzgerald in 1975, if they err, it’s now on the side of caution.”

In an earlier time the islands gave up sandstone and timber used for construction as far away as New York. But now the islands are protected, with limited access. They are forested with Wisconsin hardwoods and conifers that range from 30 to 300 years old.

The islands’ wildlife includes black bears, whitetail deer, red foxes and coyotes. This mix changes in the winter when the animals walk on the ice back and forth to the mainland. In the summer, bears often swim between islands, especially when wild berries are in season.

“By virtue of being insular, with few people traipsing around out there, these islands must be as close to their natural state as any place in the country,” I ventured.

Dave agreed, adding, “The big thing is kayaking here in the summer. People paddle around these islands. The water is so clear you can see rocks the size of houses 20 feet down.”

I walked down First Street to have lunch at Greunke’s, a place that has changed little since it opened here in 1940. The jukebox still plays 78 rpm records. I knew most of the songs. I played “Your Cheatin Heart” by Hank Williams twice.

In 1940, Greunke’s made local culinary history when they put whitefish livers on the menu. They’re still there – “deep fried or sautéed with green peppers and onions.” I had them as an appetizer. And I’ll do it again next time I’m there.