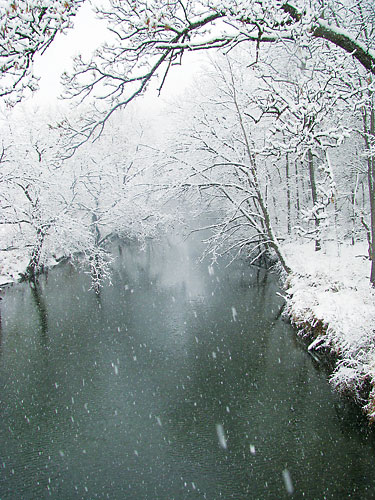 It’s the Sunday after Thanksgiving, not even December yet, and it’s snowing like it’s the nadir of winter. It started coming down before the sun came up. The sky is icy white, a crown of snowflakes. With no wind to move it, the snow collects where it lands, even on thin fencing wire. How dry snow can build up as it is on the sides of straight-up trees,
I’ve always wondered.

Were there a blustery wind, this would be a serious blizzard. As a kid growing up here in Minnesota, I loved blizzards. We all did. Blizzards close schools. Right out of bed, seeing the outside white and drifting, we turned on our radios. By 7 o’clock we knew if the schools were closed. And by 8 o’clock, we would have been on the phone and already had the day planned.

After the shoveling chores, we would usually go skating at the school ice rink. That is if the guy with the plow could get

there to clear the ice and light the wood stove in the warming shack. (That smell of soggy, wool mittens drying by that stove is still with me – socks were the worst.)

Second choice was tobogganing. But that meant a long climb up a hill for a short ride down. And when the new snow was knee-deep, it became a reward not worth the effort. The last choice: go to somebody’s house, play Monopoly, maybe, and listen to Ma Perkins and One Man’s Family on the radio. A blizzard on a weekend, we called a wasted blizzard, because roads were always clear by Monday.

It’s still early, too early for the plow to get to the township roads here. Bundling up, I grabbed my camera and began a hike down the road toward the river. No one had passed this way since yesterday, not even an animal. When I got near the river, I could see a pickup, stopped on the bridge. Dressed in blaze orange, its two occupants were out apparently looking for deer tracks. They got back in the truck and waved as they passed.

The crunch of snow under my boots was the only sound now. Silence seems heavier somehow when it’s snowing. Then overhead a wild, clamorous sound cut the 18-degree chill. High in the winter whiteness flew maybe 50 snow geese, necks outstretched, honking southward in undulating V-formations. With absolute trust in their instinct, it was pulling them south into a new season.

A couple days ago I was in Rochester, about 40 miles northwest of here, and walked among one of the largest geese colonies in North America. These giant Canada Geese here number between 30,000 and 35,000 during the peak of the fall migration. Many stay the whole winter, apparently discovering that the water at Silver Lake Park remains ice-free and warm, thanks to a nearby power plant.

In the early 1900s, hunting and loss of habitat practically eliminated the Canada Goose population. In fact, the species was thought to be extinct. Then in 1962 a small flock was found here in Rochester. People say that a patient at Mayo Clinic had brought them in. Wherever they came from, things obviously suited them here. And they lured in many of their remaining brethren.

Walking among them, they examined me from ground level, expecting maybe for me to throw out a pizza crust. That was cool. But seeing and hearing them in the winter sky was spectacular.

Next month Bill will be in Wilmington, North Carolina