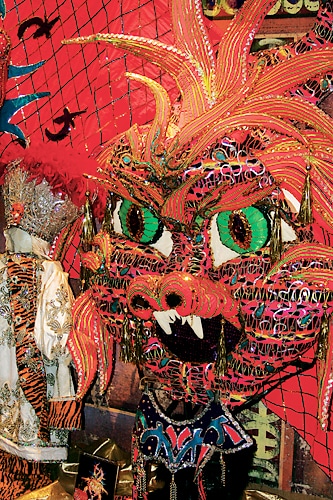 Mardi Gras is French for “Fat Tuesday,” which is usually best described as a day of merrymaking and over-indulgence in everything — except maybe sleep. Also called “Pancake Tuesday,” it’s the day before Ash Wednesday, the beginning of Lent, the pre-Easter season, and for some a solemn time of fasting.

It’s mid-February and I’m in Lake Charles, Louisiana — a city that has been celebrating Mardi Gras for so long that it has a museum just for costumes.

The buildup began weeks ago; the planning goes year-round. They’ve already had the Queens’ Pageant, the World Famous Cajun Extravaganza Gumbo Cook-Off, three parades, two Chicken Runs and the Zydeco Dance. Tonight it’s the Lighted Boat Parade, and they still have the Royal Gala, three parades and 48 hours yet to go.

Mardi Gras here is not the wild, street-party affair that they have in New Orleans. Here, it’s a family event; still, it’s equally colorful and flamboyant. Families line the streets — and the lakeshore during the boat parade — catching colored beads thrown by revelers.

The Red Hat parade through town happens Tuesday morning. I was given a red hat that apparently qualified me to ride in the parade and throw beads. It’s mostly a warm up, a preliminary show to entertain the crowd that’s collecting for the main event: the glittering “Krewe of Krewes” parade that follows after dark. (A krewe — there are 43 in Lake Charles — is like a club organized to foster and participate in the activities, each with a float.)

Along the parade route, the RV crowd showed up early. By noon, they were spread out under their awnings, loading ice into coolers and heating sausage gumbo on LP-gas-fired barbecues. Kids played catch with frisbees and compared their fresh-caught riches. By afternoon, every block took on its own music persona, fashioned by live bands or would-be 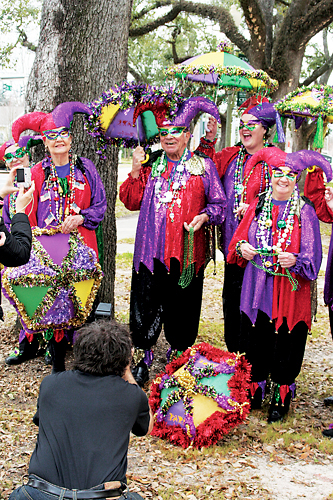 With twilight, tailgates dropped and food and drink were unloaded, enough for a national Boy Scout jamboree. People in lawn chairs lined the street, some with hibachis grilling hot dogs. Ring-eared 20-somethings in parking lots clustered around pickups. They talked in hushed tones, lest they call attention to themselves and the coolers of beer in the back of the trucks.

The parade has no marching units, no horses and no high-school bands. It’s totally mechanized. The floats are trucks and wheeled flatbeds on which decorative platforms have been built for the music makers and bead throwers, many masked, feathered and festooned to the teeth.

As darkness came on, the parade turned the night

into a jovialrock concert. Air horns on trucks blasted away. A fire truck blared its siren. People were shouting, their arms waving and reaching. The crowd pressed against the barriers along the road. Many adults, grabbing strings of beads out of the air, would then bend down and hang them around the necks of their children.

Write to Bill at at [email protected]