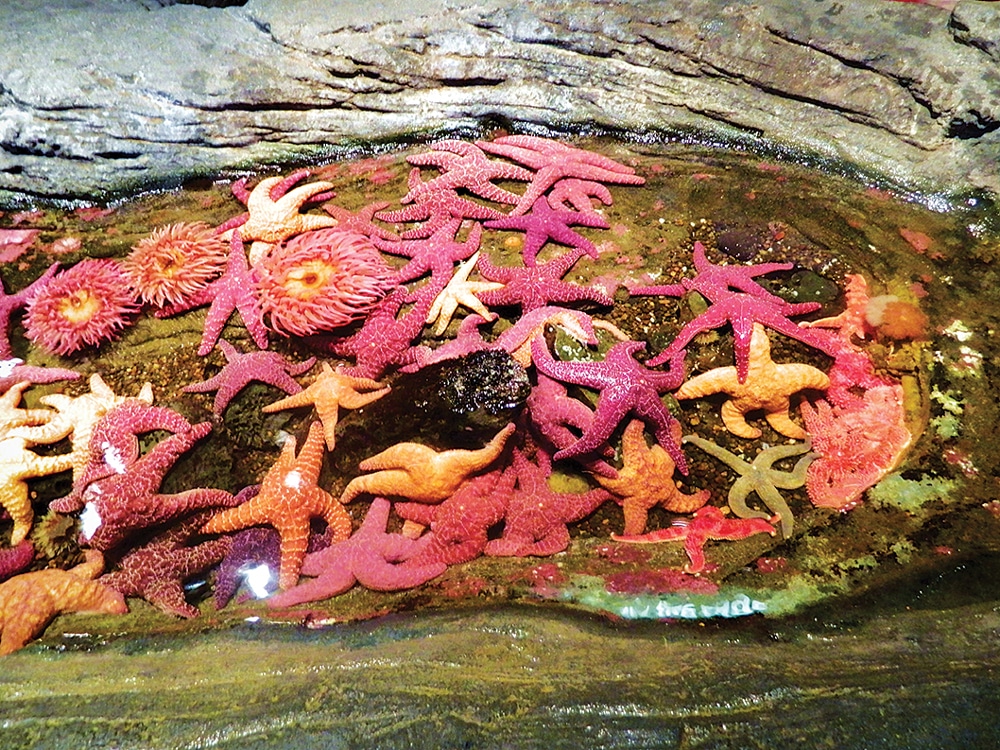 From bustling Seattle a short ferry ride gets you to the San Juans, where each island has its own charm and the pace is slower

It’s a misty, gray morning in my hometown in Colorado and I’m actually glad — because it feels like Seattle. I’d just spent six days in the gloriously green, vibrant Pacific Northwest city and the nearby, blissfully tranquil San Juan Islands, part of the state of Washington. Indeed, my mind is now filled with memories of enormous rhododendron, steaming lattes, tidal pools, and hikes and bicycle rides through woods so dense that our eyes had to adjust to the light. We met some of the friendliest people anywhere — we’d stop for a moment with a map in hand and locals would rush over, offering to help! We did and saw so much in our short stay, yet we felt we had just touched the surface.
We had originally planned our trip to the area to see the Olympic Mountains, and ended up visiting the three major islands of the San Juan Islands, a 172-island archipelago north of Seattle. No wonder Lonely Planet named the San Juan Islands No. 3 on its list for the “Top 10 U.S. Destinations for 2013” — they are spectacularly beautiful. The islands, varying in size from 57 square miles to the area of a city lot, are mostly famed for the three we visited — Orcas, San Juan and Lopez. Each has its own personality and draw, but all enjoy daylight until 9:30 or even 10 p.m. during the summer, have splendid forests with wildlife galore (bald eagles, sea otters, seals, sea lions, deer, turkeys and ospreys) exquisite beaches, as well as freshwater lakes, waterfalls and rivers, and whale-watching tours. Each also has fresh farmers markets and restaurants ranging from upscale to fast food (although never a chain, thankfully!) and at least one large grocery store. San Juan and Lopez islands’ local wineries are pleasant stops for tastings and purchases. The climate here is temperate, with average lows not getting below the mid-30s and average highs topping out at 69 degrees in August. The heaviest rain months are October through January.

Driving two hours (80 miles) north from Seattle to the Washington state ferry port of Anacortes (fueled by superb coffee from locally owned Penguin Coffee) we took the 40-minute ferry trip to horseshoe-shaped Orcas Island, known as the largest (57 square miles) of the San Juans. Orcas is known for 2,409-foot Mount Constitution, affording the most spectacular views in the islands, located within the 5,252-acre incredibly lush Moran State Park. Strolling around Eastsound Village, an enchanting little area of shops, bistros and flower-bedecked, porch-wrapped homes, we meandered past the Oddfellows Hall. From there, we visited Orcas Island Pottery, the oldest pottery in the Northwest, and then ate at Madrona Bar & Grill, a casual and friendly restaurant with a lovely waterfront view and juicy burgers.
Next, we took the ferry to 55-square-mile San Juan Island with about 2,000 year-round residents, and docked in the lively 1-square-mile town of Friday Harbor. San Juan is the island that gets the action — with a “real” county seat town that sports many 19th-century wooden fishing village homes, art galleries (check out Arctic Raven Gallery for fine Pacific Northwest Native American arts), boutiques, museums (including The Whale Museum) and many dining spots. Rumor Mill specializes in live music almost every night, with outdoor seating, tasty food and a good happy hour.

San Juan Vineyards produces wines from its island vineyard as well as vintages from the appellations of eastern Washington.

San Juan Island features splendid hikes and beaches and unusual delights such as the Krystal Acres Alpaca Farm, a pastoral paradise where the adorable South American animals graze. The gift shop has exquisite creations made of the supremely soft, warm wool from the alpacas. It’s pricey, but true quality that lasts forever. We enjoyed visiting and learning about the so-called Pig War at the English and American Camps — a fascinating history of a time in the 1800s when this island was manned by the two nations’ militaries due to a bureaucratic snafu. Best of all, Lime Kiln State Park (aka Whale Watch Park) is probably the best place anywhere to see orcas from the shore, particularly from June to August.
A short ferry ride took us to Lopez Island, with about 2,400 residents, nicknamed the “Friendly Island.” Agricultural and peaceful (with grazing lambs, horses, cows, goats and pigs), it’s ideal for bicycling. The 29.5-square- mile island is famed for its organic farms, lovely hikes and Lopez Island Creamery (we decadently ate a whole pint of its Coffee Toffee Crunch ice cream while lazing on the green grass outside the shop). Some of the most beautiful sites are Agate Beach County Park with its tidal pools (check for low tide for best sightings), Shark Reef Sanctuary (sea lions and seals are at the farthest point), secluded Watmough Bay and Spencer Spit State Park. Be sure to get specific directions to these places as they are not so easy to find. The island is dotted with meadows interspersed with old-growth cedar and fir forests leading to rocky shores and cliffs. A not-to-be-missed night out is the lovely and surprisingly reasonable Bay Café with its incredible sunset view, exquisite cuisine and great wine list.

Seattle was now our destination, so we took the 40-minute ferry back to Anacortes and rushed in to get another Penguin latte. We bought City Passes, a coupon book that gave us entry to six attractions at about half the normal price. Leave your vehicle at the RV park, as Seattle provides good public transportation, and the Emerald City Trolley takes you on a hop-on/hop-off tour of the major tourist attractions. We also walked between many of the sites.
The iconic Space Needle, a futuristic 520-foot-tall observation tower, whisks you up to 360-degree views of Seattle and beyond, way beyond. Come early or late (open until midnight) to avoid the crowds — it’s especially pretty right before dusk. Just in front of the Needle, you’ll find the EMP (Experience Music Project/Science Fiction Museum), a fantastical bloblike mass designed by Frank Gehry. EMP pays homage to local boy Jimi Hendrix, with extensive exhibits and a large interactive area where visitors can try out their own music. My photographer made his own jam session with an electric guitar.
On the same block lies the Pacific Science Center with interactive areas focusing on dinosaurs, insects and marine life — and an outdoor water park where adults play along with kids. Another gem is the Chihuly Garden and Glass Museum, with room after room of Seattle-glass artisan Dale Chihuly’s incredible work, as well as the surrounding gorgeous natural flower gardens.
Seattle’s waterfront was the original Skid Road, but the historic district now thrives with gorgeously restored buildings, unique boutiques and inviting cafés, and backs up to the delightful Pike Place Market, an enormous, mostly indoor farmers market that sells everything under the sun. The seafood and fish shops are famed for their showy antics where employees toss large fish to each other to the crowd’s cheers. This fishmonger is serious, however, about only selling sustainable seafood — no endangered fish or farm-raised salmon is allowed. To experience the Market coming to life, arrive at opening time at 9 a.m., and by 11 a.m. or so, the crowds will have filled in. You’ll find many coffee shops, including the original Starbucks, still with its logo out front with its truly topless mermaid. You’ll also find The Crumpet Shop, Piroshky Russian Bakery, Fran’s Chocolates, and dozens and dozens of other venues in which to sample. Check out Ventures Gifts for Good, a shop that sells beautiful and intriguing products made by local artisans as well as by developmentally disabled people.

The San Juan Islands are an archipelago in the northwest
corner of the contiguous United States between the U.S.
mainland and Vancouver Island, British Columbia, Canada.

Moving on, the nearby Seattle Aquarium is a joy, with fine exhibits depicting a salmon’s lifecycle and a large sea otter area (eliciting endless “Aw, how cute — I want one” exclamations from the crowd), a fabulous underwater dome filled with local sea life where I could sit transfixed for hours and a mesmerizing exhibit of the brilliant-orange giant Pacific octopus, the largest in the world — and this one’s a showoff! After seeing all of that live sea life, we strolled to Pier 57 next door and feasted on cooked seafood at The Crab Pot, a wildly popular Seattle tradition that serves up seafeasts of mussels, clams, crab, shrimp, andouille sausage, salmon, corn and potatoes. I ordered a succulent filet of Copper River salmon.
Ballard Locks, more properly known as the Hiram M. Chittenden Locks, built in 1911, is a fascinating landmark. Its adjoining museum draws onlookers daily as it shows how Seattle’s freshwater lake system is protected from the saltwater of Puget Sound. The locks also have a fish ladder that is designed to help the migrating salmon jump up the levels to enter the fresh water of Salmon Bay. A glorious arboretum lies in front of the locks, filled with exquisite trees and flowers.
Beyond the locks, take a stroll in the charming Ballard neighborhood, which was once a bastion of Scandinavian immigrants and is now a hip enclave of cafés and shops with brick streets. Seattle is full of these pedestrian-friendly neighborhoods — others are Belltown (where we happened upon the delicious and inexpensive Sarajevo Lounge with Bosnian food and entertainment), Fremont (find the troll — everyone will know what you mean), Madison Park and Magnolia, to name just a few.
Despite the Seattle drizzle, every-one seems to be outside, but on a sunny day, they are basking. The area is chock-full of cyclists, and a special way to get your Seattle sightseeing in while having a bit of exercise is with the Seattle Sampler bike tours, led by the very well-run Bicycle Adventures. The operator is willing to work with those who don’t need hotel rooms, such as RVers, and those who want a shorter tour than the standard four-day one. The tour includes three city days and one in the magnificent Cascade Mountains, cycling through an old railroad tunnel to head down into waterfalls, thick forests, rock walls, lakes and tumbling rivers.
There’s so much to see and do — museums, parks, shops, cultural offerings, beautiful landscapes — that we couldn’t fit it all into one trip. Memories of lattes in hand, layers on our bodies to shield against the drizzle, salmon in our bellies — it was all part of a rich experience that we plan to repeat.

Seattle: If  You Go

Issaquah Village RV Park | 425-392-9233 | www.ivrvpark.com
Surrounded by the Cascades, this park is located near Gilman Village and Lake Sammamish State Park, 17 miles from Seattle. The 5-acre park has 56 sites with full hook-ups, pull-through spaces and room for slideouts.

Seattle Tacoma KOA | 253-872-8652 | www.seattlekoa.com
This KOA is 17 miles from Seattle and located along the Green River. It offers a wide variety of RV sites accommodating up to 55 feet in length.
Orcas Island Campgrounds