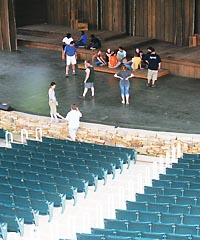 As presidents go, more parks and memorials are named for Abraham Lincoln than any other. If you add the schools, museums, banks and cars, the name Lincoln is almost biblical in our country.

In fact, they tell me here in Southwestern Indiana, where there are several of Lincoln parks — two city, a state and a federal — the books written about Lincoln are outnumbered only by those written about Jesus.

Here, 15 miles north of the Ohio River, is where Lincoln did most of his growing up — 14 years, from ages 7 to 21. There were only eight million of us then. This was the edge of the frontier. Skirmishes with Indians, often deadly, were still common.

In the fall of 1816, Thomas and Nancy Lincoln packed up their two kids, Sarah and Abraham, and left their Kentucky home for Thomas’s 160-acre claim in the unsettled woodlands of Indiana, which that year had become a state. They arrived in December, without a horse or a cow or a shelter in which to spend the night.

They went to work putting up a pole shed or “half-face” cabin. Its roof and three sides were leafy branches, dried grass and mud. At the open side, a log fire burned day and night. Here they lived for a year while Thomas built a proper home — a one-room log cabin. It had a dirt floor of 18 square feet and no windows. (Window glass and nails here were years away.) Light was from the fireplace.

For the first two years here, life was good for the Lincolns. But when Abe was 9 years old, he suffered the first tragedy of his life: Nancy Lincoln died. He whittled the wooden pegs while his father made a rough coffin for his mother. They buried her on a hill not far from the cabin.

Today, that wooded knoll is the centerpiece of the Lincoln Boyhood National Memorial, a 200-acre park that includes much of the Lincoln farm. Across the road is Lincoln State Park. Established in 1932, this wooded land is the Hoosier State’s homage not just to the president and his mother, but also to his sister Sarah, who is buried here.

It’s also a 1,747-acre recreation area with heavy use by campers. It has a 1,500-seat amphitheater, with live performances in the summer, an all-purpose lake and several campgrounds offering 240 campsites.

It was at the nature center here that I met Michael Crews, the park’s naturalist. He and his family raise buffalo nearby. Called Buffalo Run, they sell buffalo-burgers for $3.39 at their grill and gift shop there. It’s on land that belonged to Dennis Lincoln, Abe’s cousin.

Michael grew up here. And as he and I toured the area in his Indiana DNR truck, I discovered this unique relevance.

On a road boarding the national memorial, part of the Lincoln farm, he stopped. Pointing out the window, “That’s were I lived as a kid. They moved our family out to build the park.”

It took me a moment to compute what Michael was saying. “So your boyhood home and your years as a kid were right here where Abraham Lincoln lived when he was kid, given a period differential of a century and a half,” I said. 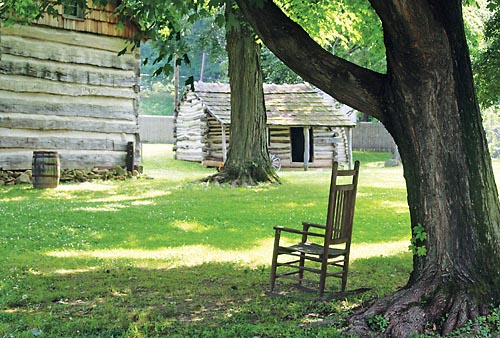 “Yah, I didn’t really appreciate it until I got into school. We played in the same woods. The trees were a lot bigger then. This is a new growth.

“Actually, I don’t think Lincoln had time to play. His life here was a struggle, every day of it. And it made him the great man and president he was.”