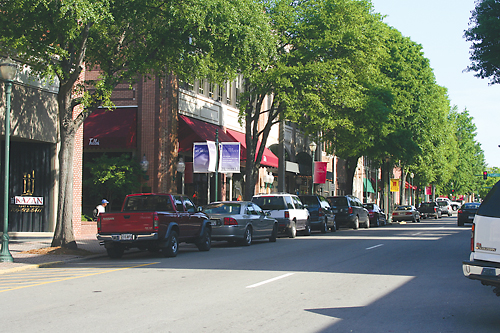 “I’d be insulted if I were served unsweetened iced tea. Nobody would do that.” Those words came wrapped in a soft, Southern drawl. Frankly, I am used to being served tea — iced or otherwise — just the way it comes out of the bag — never sweetened. Sugar, like lemon, is usually an option. But then, I have never been in Georgia before.

Dianne Levesque and I were having lunch on the promenade, off Main Street in LaGrange. “Sweet tea is definitely a Southern thing, like pouring salted peanuts into a bottle of ‘Coke-Cola.'” Dianne paused to reconsider. “Then again, that may be something we do just around here… in Georgia.”

“Never tried that,” I said, sipping my iced tea.

“That was my breakfast when I was a teenager,” Dianne said.

LaGrange, with its tree-shaded streets, is a tidy town that dates to 1828. It’s an hour south of Atlanta on the “West Coast of Georgia,” being as it is on the Chattahoochee River, which forms much of the boundary between Georgia and Alabama.

Downtown LaGrange is a survivor. I say that having spent many years visiting small towns where “main streets” have been abandoned by residents who now shop in out-of-town malls or new discount stores. In spite of the draw of a Super Wal-Mart here, they have kept downtown vibrant by offering what Wal-Mart cannot — great restaurants, a 10-screen movie theater, specialty shops and galleries.

They kept many of the old buildings, too. But they couldn’t save the courthouse: It burned in 1935, leaving vacant, right in the heart of town, a whole city block. It’s now LaFayette Square, with well-kept gardens that say much about the pride that folks here take in their town.

Georgia was one of the original 13 colonies. I had to keep reminding myself, living now in the Western United States, that the old antebellum homes here were built before most of the states out there were even thought of.

Bellevue, the most renowned of these, dates to 1853. It was built by a gent who was first a staunch unionist. But after Georgia seceded, he became a voice for the Confederacy and served time in a New York prison for it. He went on to be a U.S. Senator. (Try that today.) 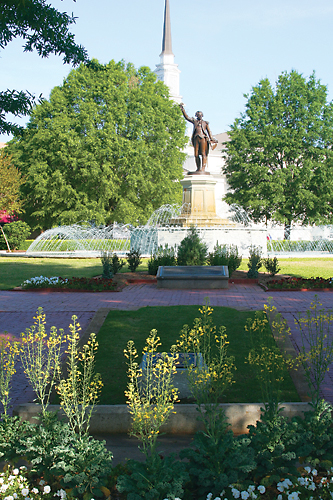 On 1,200 acres that originally grew cotton, a residential neighborhood is now immersed in what’s a 10-minute walk from LaFayette Square.

It’s open to the public, staffed by volunteers. I admire those people — both men and women — who give their time to explain the relevance of these old homes to us, the uninitiated. I have done many house tours, and I confess that when the topic gets to tapestry and china, I usually wander outside.

Here, I took a chair on the back porch. There was a time when that was a cue for someone to come from the kitchen to offer me a cool drink. Like the acres of cotton, that lifestyle is long-gone.

I looked out across the lawn, past stately magnolia tress, planted when the house was built. The sun was high and bounced hot light like a flickering torch off the chrome of a passing car. The irritating noise of a leaf blower nearby kept me in the present, but it was not hard to imagine what the sight once was from this porch a century and a half ago.