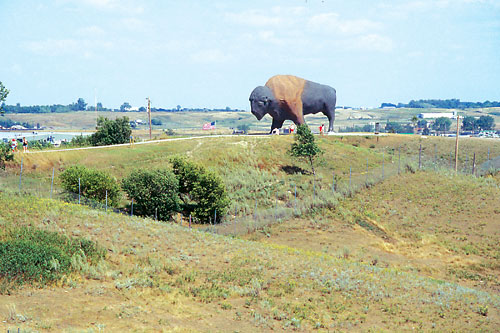 Driving into Jamestown off Interstate 94, I could see the giant buffalo on a hilltop, but I couldn’t see how to get to it. Ahead was a mini-mart. Surely, someone there would know.

The girl behind the counter was busy. At a table, a man sat alone with a cup of coffee. He wore a sweat-stained cap that named a local feed store. He looked comfortable, as if this were his own kitchen. I asked him about the buffalo.

“Then I better show ya.” He got up and walked me to a window. “See that road?” He pointed. “Take it. You’ll wind some. Then you’ll see him through the trees.”

He invited me back to his table. I grabbed some doughnuts on the way.

“He’s the biggest buffalo in the world – 60 tons of concrete,” he said. “In Minnesota, they got big Paul Bunyan statues. So in North Dakota here, we got this buffalo. And the big Holstein over near Salem, west a here. Only she’s made of  iberglass. They call her Salem Sue. Then they got this big 32-foot-high turtle up north a ways, never seen it though.

“Ya gotta understand, this state’s a flat one. We need high things for landmarks. In Bismarck, we got the ‘skyscraper of the prairies’ – the capitol, it’s 19 stories high.

“On that hill, where you’re goin’, there’s a herd of 30 buffalo. One’s an albino. We call her White Cloud. She likes to roll in the dirt, so she ain’t white like snow. You’ll probably see her.”

And I did. She was getting up from a roll in the dirt. The herd roams on 200 acres of pasture that are adjacent to the National Buffalo Museum and a street of historic buildings called Frontier Village.

Frontier Village has what you would expect from a town that pays homage to its heritage – a pioneer schoolhouse, a country church and the state’s oldest general store, built in 1878. But what you will find only here is the Louis L’Amour Writer’s Shack, a room of L’Amour memorabilia.

“He was born with a true love of learning. But he left school at 15, halfway through the 10th grade, because he said that school was interfering with his education,” said Barbara Pogue, a lifelong resident and volunteer docent in the Writer’s Shack.

“With more than 200 million copies of his books in print, he was one of the world’s all-time bestselling authors. Instead of going to school, he skinned cattle in Texas that had been killed by the drought, worked as a circus roustabout, won small-town prize-fighting exhibitions, hoboed on the Southern Pacific and shipped out as a merchant seaman,” she said.

“On the day his classmates graduated here from high school, he was in Singapore. But wherever he wandered, his pockets were always bulging with books.”

RVers I know who read a great deal usually trade their books because they don’t have room to store them. Among the most traded are those by L’Amour, according to Paul Winer, my book-trader friend in Quartzsite, Arizona. It’s a safe bet that Paul’s tented bookstore – one of the true curiosities of the road – is visited by more of us than any in the country.

L’Amour is characterized as a Western writer, which is not strictly correct. He was a writer of the frontier, wherever he found it.