Home on the Range in Florida 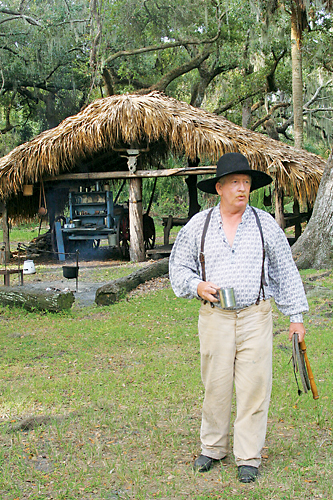 My education about the West began with  Gene Autry movies, back when matinees cost a dime: Cowboys are a creation of the American West. After all, that’s where the cows are.

So I was dumfounded — I even lost a bet — to discover in Florida that the American cowboy originated down here. They called them cow herders or “crackers.” It’s quite a story.

This, too, was a surprise: Florida is home to four of our country’s 10 largest cow-calf operations; one ranch here owns the largest brood-cow herd in the country. With nearly half of the state’s farmland in cattle production, Florida ranks 12th among the states in number of beef cows.

It started in 1521 when Spanish explorer Ponce de León, on his second Atlantic crossing, offloaded seven cows here along with some horses. Spanish settlers and missionaries raised them, which meant fighting off fever ticks, alligators, hurricanes, snakes, wildcats, wolves and Indian raids.

Still, by the early 1800s, the Spaniards had developed significant herds, as had the Seminole Indians. Because Florida was all open range, uncounted thousands of unmarked cows roamed wild, mostly in Central Florida.

When the railroad reached down into the peninsula state, it brought new settlements and

an explosion in the Florida beef industry. During the Civil War, the Confederate army became a huge customer, both for beef and leather. Cuba was also a significant buyer of Florida cattle.

In search of the cow herder story, I am in Central Florida — the land of many lakes, largemouth bass and mosquitoes. Here in Polk County there are 554 lakes. The big one — the third largest in the state — is Lake Kissimmee. On its northwest edge is a 6,000-acre state park, named for the lake. It was once a cow camp, set up around 1876. By 1890 cow camps were spotted all over the state, usually a day’s horseback-ride apart.

An abbreviated version of a cow camp has been created here at Kissimmee State Park. On weekends, Mark Koruschak, a park ranger, gets into the costume and character of a cow hunter and talks about “his life,” or how life was here in 1876.

The hiking trail to the camp is lined with tall ferns and live oak trees burdened with Spanish moss that hangs like shredded bed sheets. The camp is in a grass clearing where cattle are enclosed by a pole fence — no nails in it. A shelter, its roof heavy with long grass, is open on all sides. Inside is a kitchen on wheels, what Gene Autry called a “chuck wagon.” 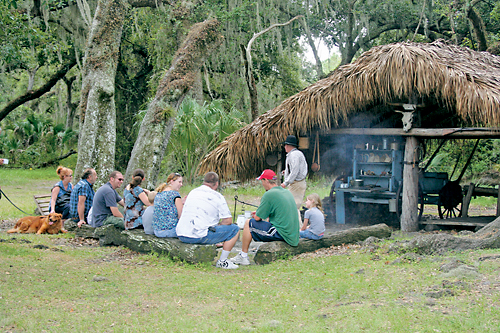 Mark had coffee brewing over a campfire. He offered us some. “It’s ready,” he said, “and strong enough to float a bullet.”

“Florida is a fence-out state. We don’t fence cattle in,” he told us. “If you don’t want cows to eat your vegetable garden, then you better fence them out. And it’s that open-range concept that spawned the cow hunters, or ‘crackers.’ We were guys who went out to find the cows and bring them into camp. Sometimes we’d be gone for a couple months.

“To move cattle, we use a whip, made of braided leather, about 10 feet long — also called a drag, cuz we drag ’em a lot. When we ‘pop the drag,’ that means we crack the whip. We don’t touch the cow. It’s the snap that gets their attention. And that’s why I am called a ‘cracker.’”

“Don’t they call you cowboys?” Someone asked.

Welcome to America’s Outback.
……….
Next month Bill will be in Brenham, Texas.