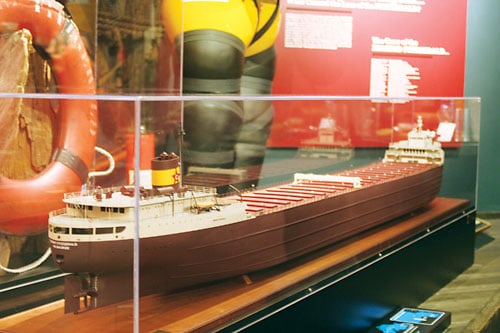 November 10, 1975: Two behemoths of the Great Lakes’ fleet of ore carriers plowed through heavy seas along the eastern edge of Lake Superior. The winds, gusting to 90 mph, were building 20-foot waves. They hit the decks of both ships like wrecking balls, pounding their vulnerable hatch covers. November – the month of storms that sailors of the Lakes call “widow makers.”

Both were headed for the locks at Sault Ste. Marie, Michigan. The Arthur M. Anderson, coming from Two Harbors, Minnesota, had been overtaken earlier in the day by the Edmund Fitzgerald – she was faster, making 16 knots. The Fitz had taken on 26,611 tons of taconite pellets (iron) the day before in Superior, Wisconsin.

The Fitz, at 729 feet, was at that time the largest ship ever to sail the Lakes. This was her 18th season, still a youngster.

Captains Cooper, of the Anderson, and McSorley, of the Fitz, had been talking with each on the radio, both concerned about the gale warning that had just been posted.

By late afternoon, the Fitz was in trouble. She was obviously taking on water, source unknown, as the ship had a list. Determining if her hatch covers were still secure was guess-work at best, as huge waves were rolling across her deck. After darkness came on, it was impossible to tell.

His ship riding perilously low and taking a terrible pounding, Captain McSorley radioed the Anderson at 4:10 pm, “I have lost both radars. Can you provide me with radar plots till we reach Whitefish Bay?”

“Charlie, on that,” came the reply from Captain Cooper.

Bill Maki, on the Anderson, was about to go on watch. He had the 8 to midnight on the bridge. It was close to 7 when he stopped by the galley for a snack. He entered the pilothouse about 15 minutes later. All was quiet, except for the gale lashing the double-span windows.

“I knew that the Fitz was 11 miles ahead. I had seen it earlier,” Bill told me. “But now it was snowing. I couldn’t see her light, couldn’t see anything. I heard the transmission from the Fitz, ‘We’re holding our own.’ That was the last we heard
from her.”

The two radars in the pilothouse swept the area ahead of the Anderson. The blip that was the Fitzgerald minutes before was gone.

“The weather cleared right after that,” Bill remembers. They could see now the lights of three other ships ahead that were leaving Whitefish Bay. What was troubling was what they couldn’t see. “By then the Captain was on the radio with the Coast Guard.”

I met Bill at The Great Lakes Shipwreck Museum at Whitefish Point in Upper Michigan. He works there as a docent.

This stunning museum is packed with artifacts that tell the stories of shipwrecks on Lake Superior. The one that gets the most attention is the bell from the Fitz. It was recovered in 1995, cut from the pilothouse. The ship is now in two pieces, resting 17 miles northwest of here in 550 feet of water. Her crew of 29 is still on board.

What happened to the Fitz? No one will ever know for sure. Since she had a following sea, she was apparently hit by an immense wave that pushed her bow well beneath the surface. Then tons of taconite and water shifted, following gravity to the bow. A second wall of water rolled over the ship, assuring that the Fitz could never struggle back to the surface.

Her bow hit with great force, plowing a 30-foot gash in the bottom of the lake.

Next month Bill will be in French Lick, Indiana.