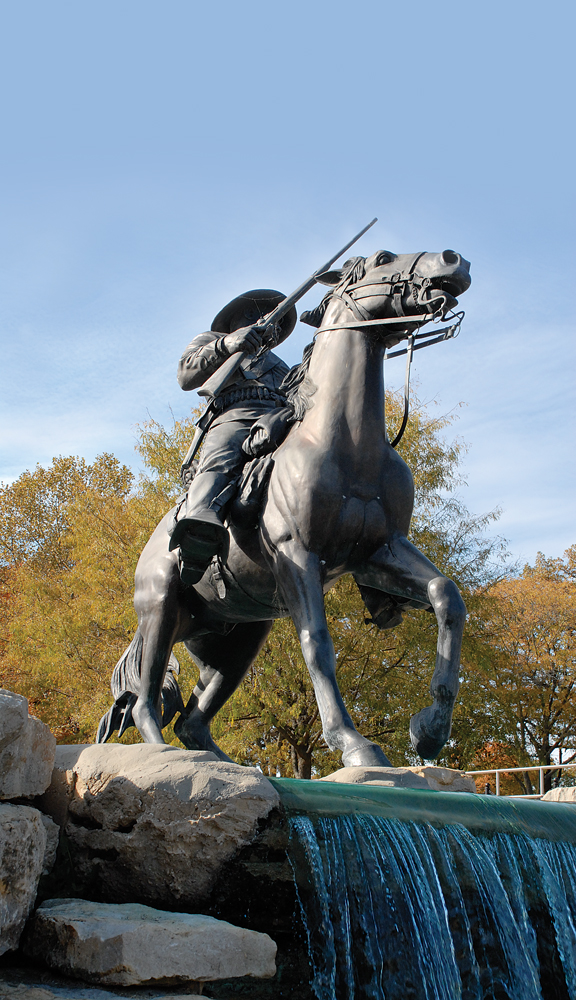 The brochure’s invitation to “travel through history along our river bluff road” was too tempting to ignore. Photos showed the two-lane Glacial Hills Scenic Byway crossing over a rise, and then diving amid groves of oaks and maples festive in fall color. The serpentine Missouri River, thick woods encroaching upon its banks, could be seen from a hilltop; a larger-than-life bronze Buffalo Soldier on horseback appeared to leap from the page and a stately white frame and brick home with Gothic-style windows stood proudly. A Midwestern autumn transformed the northeastern Kansas summer’s jade into bright yellow, scarlet, orange and hues of amber along this 63-mile drive.

The route follows Kansas Highway 7, beginning at the intersection of K-7 and K-92 in Leavenworth, a town of about 35,000 that was founded in 1854 as the “First City of Kansas.” Twenty-seven years earlier, just to the north along the Missouri River bluffs, Col. Henry Leavenworth established the fort that bears his name. It would play an important role in keeping the peace between the various native tribes and the growing number of settlers heading west.

To get the story on the town, we recommend visiting Leavenworth Landing Park, once a jumping off point for settlers heading west (at Cherokee and Esplanade streets), site of the Port of Leavenworth. Interactive displays called “Waysides” tell the story of this once-thriving community.

Also worth a visit are First City Museum, which displays frontier railroad and manufacturing industries memorabilia; the Richard Allen Cultural Center, a museum of African-American heritage; Carroll Mansion, an elegant Victorian home built in 1882 and furnished in the era.

The C.W. Parker Carousel Museum houses an 90-year-old band organ, playing only songs popular before 1930; a 99-year-old carousel goes around and around, its colorful stable of 24 horses, two rabbits, three ponies, a chariot and a lover’s tub offering rides to young and old.

Enthusiastic museum director Jerry Reinhardt explains that for nearly half a century the 40-foot diameter carousel, new in 1913, was part of a carnival that traveled a circuit around the Midwest. Then, after sitting idle for several decades, it was purchased by the Leavenworth Historical Museum Association in 1997. Reinhardt was among the dozens of volunteers who restored the carousel to its original appearance and function, and was instrumental in building the grand 20,000-square-foot structure that now houses it.

The museum, which opened in 2005, is also home to the oldest operating wooden carousel in the world. Built around 1860 and bought by the National Carousel Association, it’s here on permanent loan. Its dozen solid-body wood horses and two farm wagon seats offered rides until 1990, said Reinhardt. He demonstrated how it operates, cranked by hand, but said it’s now too fragile for riders.

Here, too, is a 1950 carousel with 20 horses of cast aluminum, made by C.W.’s son, Paul Parker, who ran the business — the largest carousel maker in the world — until 1955. There’s also a large gift shop of carousel-themed items and a museum of memorabilia.

The famed statue of the Buffalo Soldier Monument at Fort Leavenworth.

Fort Leavenworth, the third oldest active military installation in the country, is next along the drive. (Be prepared to show a photo I.D. at the entrance.) Today it’s a city unto itself, with schools, restaurants, rows of apartments, a museum, baseball diamond, fitness center and more. But the historic sites include a National Cemetery, one of the first 10 established by President Lincoln, the U.S. Army Command and General Staff College (founded by General Tecumseh Sherman in 1881), historic Memorial Chapel, a swale created by the thousands of wagons that passed by the fort on the Santa Fe and Oregon Trails, and the 1834 Rookery, which is the oldest building in Kansas.

The imposing bronze Buffalo Soldier Monument is here, its rider (of brochure fame) reining in his mighty steed at the edge of a cascade of indigo-colored water. The monument, dedicated by Gen. Colin Powell in 1992, is in memory of the 9th and 10th Cavalry Regiments made up of African -American soldiers.

The group, headquartered in Louisiana and Leavenworth, Kan., was organized in 1866 to protect the frontier, establish forts and preserve the peace. Cheyenne warriors gave them the name “Buffalo Soldiers,” possibly for their “short curly hair like buffalo,” reads another placard. They fought in the Indian Wars, the Spanish-American War, Philippine Insurrection and World War II; were deactivated in 1944, re-designated as the 509th Tank Battalion and activated in 1950, and integrated into the regular army two years later.

Heading north from town, the two-lane road winds through a bucolic landscape of plowed fields, trim farms, wooded hillsides and lush pastures where cattle graze. According to a sign, the Santa Fe Trail, protected by soldiers from the fort, crosses by a dozen or so miles north of Leavenworth. A historical marker gives a brief timeline of the fort, which was the army’s primary base of operations on the western frontier for 30 years.

Earhart was born July 24, 1897 in her grandparents’ home, a Gothic Revival manse atop Quality Hill, a high bluff overlooking the Missouri River. According to Louise Foudray, who leads tours of the home/museum, Earhart spent her childhood school years here in an intellectual atmosphere that fueled her love of travel and adventure.

As an adult she wrote prose and poetry, gave talks on women’s rights and aviation, and set flying records. Shortly before her 40th birthday, on July 2, 1937, attempting to circle the globe, Earhart went down in the South Pacific and was never heard from again. The home she was born in, a private residence until 1984, has been restored to its early 20th-century appearance.

Driving or walking tours of the surrounding historic district — about 30 homes dating from the early 1860s through the 1920s — are available at the Atchison Area Chamber of Commerce. Other attractions include the Atchison Trolley, offering sightseeing tours, the Atchison Rail Museum, Lewis and Clark Pavilion (Riverfront Park), and International Forest of Friendship, a memorial to those who have contributed to aviation and space exploration.

The scenic drive continues north through a rich land of golden fields, prairie grass and corn stubble, that arc over rolling hills sculpted by glaciers some 10,000 years ago. Ahead, Troy, population 800, (follow the signs from Highway 7) is a lovely town of antique brick streets, a fine brick courthouse built in 1906 and a scattering of white-frame Victorian mansions.

A 30-foot-high chainsaw sculpture of a Native American – “Tall Oak, to the American Indian, by Peter Toth, 1979,” reads a placard — stands on the courthouse grounds. Just north of town on a lonely hillside is a life-size steel silhouette of a Pony Express rider galloping along what is now U.S. Highway 36, but in 1860-61 was the express route west from St. Joseph, Mo.

An antique store in White Cloud was once the town depot and has since been moved and became a general store.

Ahead, the drive winds along bluffs of sandstone and loess (German for “loose soil,” brought here by wind and the river) toward White Cloud, a town of steep streets and antique buildings, which “had 1,100 residents in 1910, when barge traffic on the Missouri was heavy, but probably only about 250 [residents] now,” says Regina Stillman, pastor of Foster Memorial Church.

At her suggestion we looked up Bob Breeze, the town historian who was born here 81 years ago. A railroad, the Atchison-Nebraska City, also came through, he said, but not since 1933. Breeze, with a grizzled beard, long gray ponytail and bright blue eyes, explained that he, too, left to join the Army then continued on to work in Hollywood where he acquired the nickname “Wolf River Bob,” but returned to his hometown 40 years ago.

In 1970 he established the White Cloud Flea Markets. These three-day events are held every May and September and draw some 15,000 visitors to 400 vendors. Breeze, who runs an antiques shop in the weathered former railroad depot, also founded the local historical society/museum, which occupies a stately brick building that was a school from 1871 to 1969.

Breeze observed, “everybody knows about piggybanks, but not many know they originated here.” He explained that a local boy, Wilbur Chapman, was 10 years old in 1910 when he heard about a youngster with leprosy. To help, Chapman sold a pig for $25 and sent the money to the Leprosy Foundation. From this came the idea of distributing piggybanks to school children to raise money for fighting the illness, Breeze said. By 1938, when a monument to Chapman was dedicated, 100,000 cast iron piggybanks collected more than $1 million. Later, similar banks, such as the one Breeze keeps handy to show visitors, were of aluminum.

The drive continues two miles farther north to the Kansas/Nebraska state line, where a large sign explains the boundary between the two. In 1785 Congress adopted the still-in-use system of land survey, using distances measured from two perpendicular lines, north-south meridians and east-west base lines. Generally base lines fall within states, but here and in four other U.S. locations base lines are also boundaries. 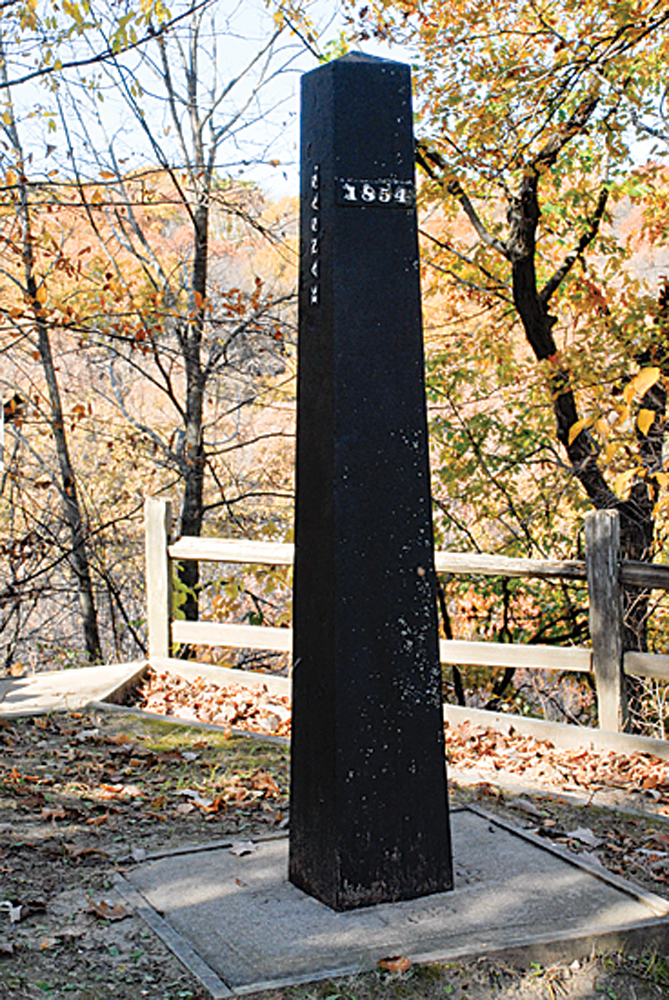 This obelisk marks the state line between Kansas and Nebraska.

The Kansas-Nebraska Act of 1854 created territories that had to be surveyed before they could be settled. The sign tells the story of how in 1855, a 6-foot-tall, 600-pound cast iron obelisk was hefted up the 100-foot bluff just west of the road to mark this boundary/base line. You can’t see the obelisk from the road. But we recommend hiking to the top (it’s a hardy climb, but there’s a leaf-strewn dirt path and periodic handrail) as a fine way to wrap up your trip to this region. Placards at the summit tell more history of the area. There’s also a book to sign, and a bench where you can sit and enjoy an incredible view of the beautiful rolling landscape spread out before you.