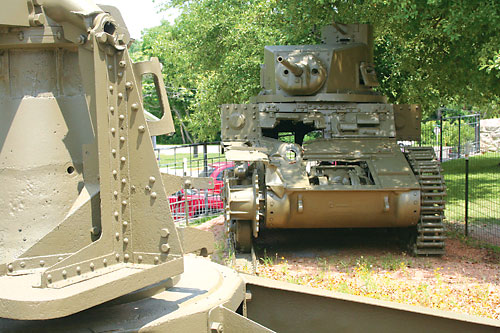 Main Street in Fredericksburg is so wide, I am told, that people often forget why they crossed it by the time they get to the other side.

The reason it’s wide is because oxen are stupid. The German emigrants who settled here in 1846 couldn’t teach their ox teams to back up. So they made the street through town wide enough to turn the teams around in the middle of it. And that’s not just for a few blocks, but the entire 31?2 miles of it.

Main Street today defines this town: It’s old but vibrant, it’s ethnic, it’s tidy and it marches to its own drummer – it doesn’t even have a Starbucks. No renovated history here; it’s all right out there the way it’s always been. There is some restoration, sure, but when buildings are made of native limestone and put together by German craftsmen, they don’t need to be revived – heaven forbid, given a facelift.

By design, national chain stores are not on Main Street. “We want out-of-town folks to visit,” a storekeeper explained. “So we don’t have stores that make the town look like where they just came from.” Fredericksburg, population 11,000, is deep in the Texas Hill Country, 70 miles west of Austin and 65 miles northwest of San Antonio. It rates with me as unique among the many distinctive towns of Texas.

Coming into town and turning on to Main Street, what I came to see here was right on the corner – the Nimitz Hotel. It was once owned by Charles Nimitz, who knew the value in the hotel business of distinctive architecture and how it works on people’s curiosity. (Maybe Las Vegas hoteliers learned from him.) He added a superstructure around 1888 that made the hotel look like a 19th-century steamboat, with its bow thrust into the choppy sea of Main Street.

It has not been a hotel for a good while. And subsequent owners removed the ship façade, but it has been put back – complete with a crow’s nest from which the American flag flies day and night. And well it should. History and the supreme accomplishments of a hometown boy have taken the merely curious and turned it into a landmark in Fredericksburg.

The Nimitz Hotel is now part of the National Museum of the Pacific War, the only facility of its kind in the world. It covers more than six acres and has more than 40,000 artifacts, from both the United States and Japan.

Charles Nimitz’s grandson was Fleet Admiral Chester W. Nimitz, who directed the U.S. victory in the Pacific during World War II as commander of the Pacific Fleet.

Admiral Nimitz was born here, a short distance from his grandfather’s hotel. Shortly before his death is 1966, he was approached by a group from Fredericksburg to convert the old hotel into a museum in his honor. He said that he would approve the request so long as the museum was dedicated to all those who served with him in the Pacific Theater.

And so it came to be; the Nimitz Museum was in the hotel for 10 years. But in 1999 it took on a much broader scope. In that year, former President George H.W. Bush, himself a Navy pilot in the Pacific War, cut the ribbon to the Bush Gallery opening the National Museum of the Pacific War. It adjoins the hotel with 60,000 square feet of building space. The merely curious had become the significant.