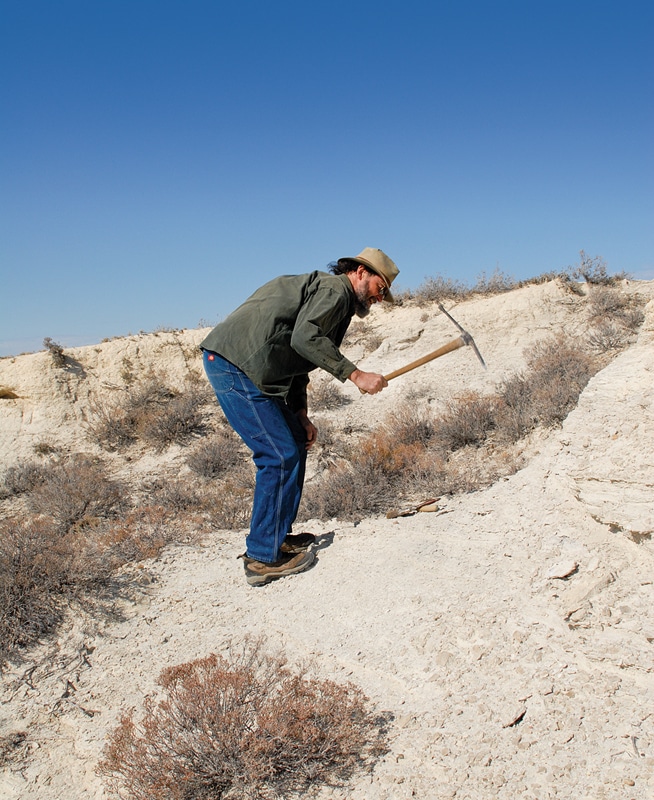 Heading south from Oakley, Kansas, a rustic town noted for the 1868 bison shoot in which William Cody became legendary “Buffalo Bill” Cody, U.S. Highway 83 cuts across terrain that is mostly as flat, round and brown as an old penny. But here and there along the 26 miles south to Keystone Gallery, our destination this brisk fall morning, the land features sprouting dagger-bladed yuccas, then rumples into low hills or splits with rugged outcrops of gold-colored rock and jagged arroyos exposing low, white-chalk scarps.

The few buildings you see as you drive are of yellow stone (as are the fence posts) because when they were new a century or more ago, there were no trees. The evergreens clustered into the occasional windbreaks of today were imported, said artist Chuck Bonner, who with his wife, photographer Barbara Shelton, owns Keystone, a 900-square-foot fossil world. When you pass the amusing “Pteranodon Ahead” sign, you’re almost there.

Ringed by fat cedars, the gallery, originally Pilgrim Holiness Church built in 1916, and former parsonage next door where the couple now lives, are an oasis with high, wide views of the austerely beautiful plains and Smoky Hill River Valley. The river, a respectable stream in this arid land, meanders past just to the north. In the Wild West days, Butterfield Overland Dispatch stagecoaches ran along it.

From the gallery Bonner gestured to a distant white bluff, which he called “Niobrara chalk,” and said that type of formation, located along the river and its tributaries, is where the fossils he has spent his life hunting and studying are found – in deposits laid down millions of years ago when a vast, shallow sea covered the region. It receded about 65 million years ago as the Rockies were uplifted. Throughout the ages, hosts of the prehistoric sea creatures died and became embedded in the soft, chalk-like sea floor, material similar to England’s White Cliffs of Dover, Bonner explained.

Chuck Bonner, 57, grew up in Leoti, an hour or so southwest, where his father, Marion, owned the local movie theater. But Marion Bonner was also an avid fossil hunter, and frequently probed this fossil-rich landscape with such noted paleontologists as George Sternberg, among others. And most weekends, the elder Bonner and his wife, Margaret, would load the family of 10 – Chuck, his three brothers and four sisters – into the 1949 Chevy Suburban nicknamed “Spiker” and drive to the chalk fields. Aged Spiker, garaged this day, is still the vehicle of choice for taking visitors on fossil-hunting expeditions, Chuck Bonner said with a smile.

Keystone, which opened in 1991 (and appears in the 2007 “1,000 Things To Do Before You Die” guidebook), opens a window to a long-gone world, when during the late Cretaceous period 65 to 87 million years ago the waters teemed with life.

Shark teeth, like this one found by Chuck Bonner, are common discoveries at Keystone Gallery.

A mural Bonner painted on the gallery’s rear wall depicts the ancient sea and the creatures that inhabited it, among them 20-foot sharks, 30-foot mosasaurs with two pairs of paddle limbs, giant squid, turtles similar to leatherbacks, clams with 3-foot wide shells, ammonites and huge fish with names like gillicus, pachyrhizodus, cimolichthys, bananogmius and xiphactinus. And swooping over the water in search of a snack are pteranodons, reptile-like creatures with 25-foot wingspans.

Nearby, the fossilized skeleton of a 14-foot xiphactinus, a ferocious-looking animal with 3-inch fangs, hangs on one wall, and a 21-foot mosasaur covers much of another wall.

Travelers can find many treasures inside the Keystone Gallery fossil museum.

Shelton, 54, said she was a “city girl” from Mission, Kansas, studying political science at Fort Hays State University at the time Bonner was there as an art student. After they married they came to western Kansas, “so far off the grid there is no grid,” she said. In 1980 they bought the church, which had stood empty for nearly 30 years, and the acre it stands on.

“Nothing was left of the place but four hinges,” she said. “Even the baseboards were gone.” But the couple and several friends, among them sculptor Pete Felten, who carved the bison statue out front, restored the antique structure for a museum and second-story art studio for Bonner.

Keystone and the house are powered entirely by sun and wind, as the area is rarely lacking for stiff breezes. On this day blades on the windmill beside the house were whirling, and Shelton had lit the antique cast-iron woodstove that heats the gallery.

The Keystone Gallery fossil museum is housed in Pilgrim Holiness Church, which was restored by owners Chuck Bonner and Barbara Shelton.

Most major natural history museums own specimens from the area, Bonner said. As far back as 1870, professors from Yale University came here to hunt fossils and claimed some 2,000 mosasaurs for the school’s prestigious Peabody Museum. Bonner and Shelton have found more than 100 significant fossils, many of which are at universities and museums around the world. Bonner has also lectured on the subject at Yale and the Cincinnati Science Center.

His favorite place to lecture, he said with a smile, is in the chalk beds themselves, because many of Keystone’s 3,500 annual visitors are interested in going on a hunt.  He and his wife charge $200 per person for full-day (8-hour) hunts and $100 for half days. The full-day excursions, Bonner cautioned, “involve a lot of walking.” Though the land is privately owned and fenced, for a fee (included) area ranchers allow fossil hunting.

On our brief excursion this blustery day – too cold for a long outing – Bonner almost immediately pointed to a tip of shiny gray poking from the chalk, a perfect shark tooth. He said the best time for hunting (preferably April through June, September and October) is right after a hard rain, which washes out the fossils.

If anything truly rare and important is found, Bonner reserves the right to keep it for the gallery or a museum. But because the area is so rife with fossils, he guarantees everyone will go home with treasure.

For more information or to arrange a fossil hunt, contact Keystone Gallery at (620) 872-2762 or [email protected], or visit www.keystonegallery.com. Keystone Gallery is located 26 miles south of Oakley, Kansas, and 18 miles north of Scott City.

The Keystone Gallery museum holds a United States seal created with only fossils.

Add another stop to your Kansas visit and check out Oakley’s Fick Fossil and History Museum. The original collection of fossils belonged to Ernie and Vi Fick, who owned a ranch about 30 miles south, said Janet Bean, the museum director.

Over the years, Vi Fick found more than 11,000 shark teeth, many of which she turned into art, now displayed at the museum. Her 3-D works depicting flowers, trees, baskets, vases and others are of acrylic paint, papier-mâché and shark teeth, as well as reptile teeth, snails, vertebrae of various creatures and more.

Also on display is a fossilized mosasaur skeleton, rare in that its eye socket and teeth are intact, said Bean. George Sternberg, Marion Bonner’s colleague who hunted the Smoky Hill area from 1924 to 1927 and was curator of paleontology at Fort Hays State College, collected many of the fossils. Among these are a plesiosaur paddle with shark-tooth scars and a 15-foot xiphactinus.

The museum, which opened in 1975, also houses a replica of the town’s 1886 depot, in addition to an array of hand-carved wood toys from the 1930s; a life-size furnished sod house typical of the area; wood carvings by Vi Fick; a mounted bison; cases of minerals from around the world; a Remington bronze called “Bronco Buster;” hundreds of historic photos from the area; and a plaque proclaiming Oakley as the “birthplace of the legend of Buffalo Bill.”

In an 1868 competition between William Comstock, buffalo hunter from nearby Fort Wallace, and William Cody, from Iowa, who hunted the animals for railroad crews, Cody emerged the victor killing 69 bison in one day to Comstock’s 46, and was thereafter known as “Buffalo Bill.”

Other Area Attractions Include: