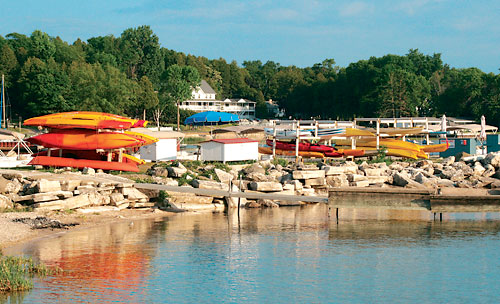 The eastern edge of Wisconsin is shoreline. Lake Michigan – the only one of the Great Lakes we don’t share with Canada – borders the state from top to bottom. Up the shore, north past Milwaukee and Sheboygan, is a peninsula that stretches almost to Michigan. The water passage between these two states, at the tip of the peninsula, was named by the Indians: “Death’s Door.”

A sufficient number of 19th-century seafarers died trying to navigate this treacherous passage to give the name credibility. The peninsula is named Door, as is the county that encompasses most of it.

About 30,000 people live up here. That number doubles in the summer with the influx of part-time residents along with the rest of us, as this is a serious tourist destination, but not a “touristy place.”

It has dozens of fine places to eat, but no McDonald’s or any plastic-roofed place to get food served through your car window. It has beautiful resorts, B&Bs and campgrounds. Dozens of wooded campsites in the Peninsula State Park give true meaning to the word rustic.

As for local tastes: On the shelves of the Fish Creek Market, I saw smoked oysters, French Helix Snails and cherry brandy jelly, but no Spam.

They grow cherries and apples here along with cows and white-tailed deer. It would not be Wisconsin without them.

I visited a cherry orchard where you can pick your own. After the low branches are cleaned off by the public, the owner uses a mechanized tree shaker that drops the rest of the cherries into a big umbrella. The shaker has a downside, as it shortens the life of the tree by about five years – guess it’s worth it. With the cherries, they make everything from wine to salsa and sell it on-site.

On the west side of the peninsula is Green Bay. A city at the south end of it has the same name, and the Packers, of course. The bay freezes solid in the winter – thick enough to drive a car on – while Lake Michigan is always open.

Fish shacks are hauled out on the ice in December, or whenever the ice is thick enough. The guys who fished covered with sunblock a couple months before begin a new season wrapped in winter parkas, scarfs, and wearing snow boots. Same fish, different approach. The fishing hole he used to sit over in a boat, the fisherman now walks or drives to it. 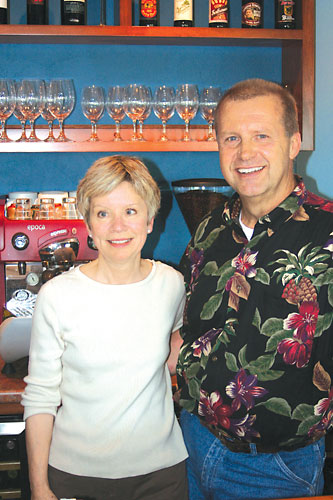 Whitefish is the prime commercial catch here; it’s served in restaurants all over Door County. In the town of Fish Creek, The Cookery serves a whitefish chowder – it’s excellent – that Dick Skare, the owner, says is made from a secret recipe. So secret that “When the chowder cook leaves,” Dick said, “we have to shoot him.” Before I could ask about kitchen-staff turnover, Dick’s daughter offered me some homemade Oreo cookies, and I forgot the question.

Whitefish is also king at a Fish Boil – something the Scandinavian settlers brought here 100 years ago. It’s done outdoors over a roaring wood fire. A couple minutes after dumping chunks of fish into the boiling pot – red potatoes and onions are already in there – the master boiler throws oil on the fire. Flames explode up the sides of the pot. Instantly the water boils over and with it goes the fish oil.

A Scandinavian trick for getting rid of the oil – there’s probably an easier way, but the fish were delicious and it was a great show.

Next month
Bill will be in Columbus, Georgia.