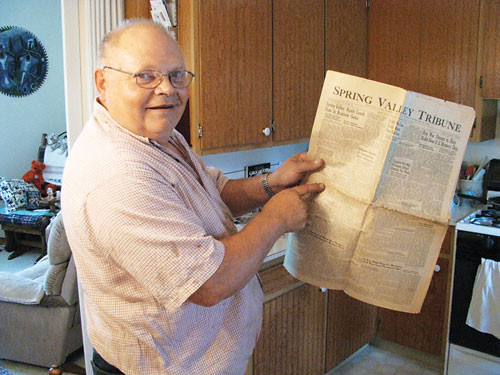 On maps of Minnesota, Cherry Grove qualifies for a white circle on County Road 5. Its name is on highway signs at both ends of town. The cemetery – its outer fence is shared with a cornfield – has about 500 residents. The church – it’s Methodist – claims a membership of 130. But less than 70 people live here, and that’s on weekends and holidays when
everybody’s home.

Things have been better for this little town in southeastern Minnesota. Not that things are bad. It just has all the outward signs of having been busier, a self-sufficient town.

It’s certainly been here a while; the population of the cemetery says that. Its one-room community center was the school. It’s used now for family reunions and gets financial support from a pop machine – in the Midwest, that’s what they call a cold-drink dispenser. It’s outside under a cover between two picnic benches. Convenient, right on the county road, it’s the only place in town to get a drink.

As far as the Post Office is concerned, the town is not here. Mail is delivered from nearby Spring Valley. But
to get that done, Cherry Grove residents have to swallow hometown pride and give their address as Spring Valley, ZIP 55975.

The Mercantile Store has been here since 1904, although the town was here 30 years before that. It still has the sign on the front – simply because nobody’s bothered to take it down – but it’s not a store anymore. Loren Smith and his girlfriend Cloe have lived there the past few years.

Loren used to restore old cars. Now retired, he restores old toys and collects them. He showed me a 1930’s vintage scooter that looked like it has just arrived from the Sears & Roebuck catalog store.

He and Cloe got together in 2006. When they were kids in Spring Valley, they rode the school bus together. But Loren admits now that he was too bashful then to even talk to her.

At a rummage sale recently, Cloe picked up a yellowing copy of the Spring Valley Tribune. She noticed the date – July 22, 1943. On the front page, under the column “New Arrivals,” was Loren’s birth announcement. Obviously, they could not leave that behind.

He showed me the paper. “When I was born,” he said, “a pound of coffee sold here for 29 cents.” Pointing to an ad, “And a cabbage was five cents. Two pounds of pure lard was 35 cents … can’t imagine buying it though.”

The Mercantile Store and the pop machine are about all that there is to “downtown” Cherry Grove. And that’s what you will see when you visit here any day of the year, except the Fourth of July.

On Independence Day, Cherry Grove has a parade. The most popular event in the county, it’s a potluck affair – nobody knows who or what will be in it, nor does it matter. As they have for the past 18 years, the participants just show up some time before 10 am to get in line.

Bernie Finke – if there is a parade organizer, she is it – guesses that 1,500 people line the parade route every year. “I sometimes call around looking for a marching band,” she said. “Never can find one, but we have a band that rides behind a truck. Or maybe it’s a tractor. We have a lot of those.”

Bill’s e-mail address: [email protected]
Next month Bill will be at the
Great Lakes Shipwreck Museum in Michigan.