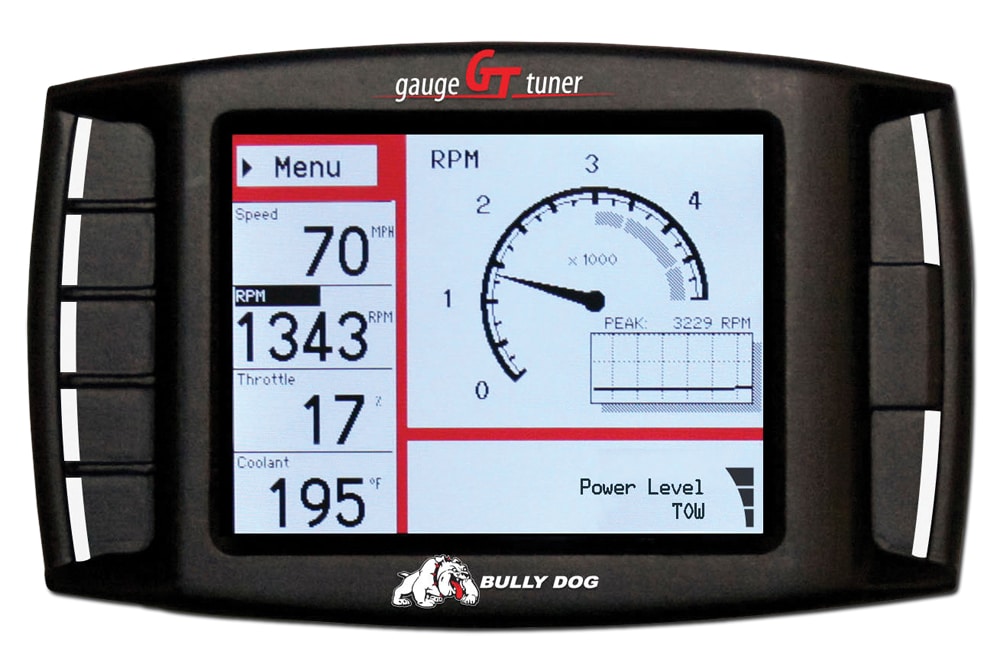 Sitting around the campfire the topic of conversation often centers on fuel economy and optimum performance. Everyone wants to get up the grades first without sacrificing mileage. One company that specializes in making those wishes come true is Bully Dog, a leader in performance products for diesel- and gasoline-powered tow vehicles. The company’s GT Gauge Tuner in conjunction with its Rapid Flow Cold Air Intake work together to create maximum torque and better airflow for diesel trucks — especially those pulling a heavy trailer.

The GT Tuner is a diminuitive device that packs a horsepower punch. How can something so small and simple-to-install be so effective? The GT Gauge Tuner (model #40420) is four products in one. It’s a top-quality performance tuner, monitor, multiple gauges and a comprehensive diagnostic tool. It is designed to improve towing and overall performance of your truck by increasing fuel economy, and boosting horsepower and torque. An easy-to-read monitor displays a variety of different functions and settings that inform the driver of specific, comprehensive readings to monitor the action under the hood.

Bully Dog’s GT Tuner allows for quick adjustment of the settings for desired horsepower range and peak torque. With detailed information available at the touch of a button, you can also do things such as accurately determine the best time to shut down your engine after driving when the exhaust gas temperature (EGT) cools to a safe level.

As a rule of thumb, it’s best to take a look at the efficiency of a vehicle’s cold air intake, too, when adding a performance tuner. Bully Dog offers a companion product, Rapid Flow Cold Air Intake (#51104) that’s designed to maximize the performance of the GT Tuner. The Rapid Flow is a direct replacement for the factory air box.

The increased diameter airflow tube and the reusable, high-flow air cleaner in this kit provide increased air volume to the engine. When used with the GT Tuner, additional horsepower and torque are realized. It’s best to use Bully Dog’s pre-filter (#51104-9) to help extend the time between cleanings and repel water from the filter. The RFI Maintenance Kit (#229000) is used for cleaning and oiling the filter.

Don’t let the advanced technology of the GT Tuner and Rapid Flow Cold Air Intake detour consideration for a do-it-yourself installation. Both these products were installed on a 2011 Ford F-350 diesel-powered truck with dual rear wheels, and the installation was very basic.

The intake install begins by removing the stock components. After preparing the Rapid Flow Cold Air Intake by assembling several retained pieces from the factory air box, it’s ready to install. Figure on approximately 20 minutes for this project. If you’re queasy about doing the work, install the components during normal business hours just in case you need any tech advice from Bully Dog.

The GT Tuner install time is approximately 25 minutes with five steps that are relatively well described in the owner’s manual. Additional time will be needed to complete the initial download process that is automatically started once the system is in place and the key is turned to the “ON” position for the first time. This is a one-time-only procedure.

Begin by connecting the OBDII adapter to the OBDII port in the truck. Then you simply connect the power wire to the truck’s fuse box. Bully Dog made this step easy by utilizing color pictures and fuse numbers as a guide, however not all fuse boxes are listed. Mount the tuner box to the windshield with the universal suction-cup bracket, run the wire harness to the OBDII adapter, turn the key to “ON/RUN” position and select your vehicle from the screen option to begin the download process. Note: You cannot disturb the GT Tuner while the initial download is taking place.

During the download process the GT Tuner will inquire about the specific type of fuel your truck uses in order to properly tune for peak horsepower, optimum torque and octane/cetane settings. If you have a diesel truck, the GT Tuner will automatically load the engine tuning information. It took about 15 minutes before the GT Tuner’s screen prompted us to customize other settings with display functions specific to the test vehicle. This portion of the setup process is simple and covers topics such as engine tuning and setting options before moving on to the gauge setup where the user can select speed, boost, RPM and coolant parameters (PID).

The GT Tuner’s large up/down buttons are easy to operate allowing the user to scroll through the options and highlight the choices. Specific vehicle options include engine size (displacement), tire size and vehicle weight.

Once everything was buttoned up, we road tested the truck with the tuner set to the Tow Mode pulling a 16,000-pound fifth-wheel. Before the tuner and intake were installed, we recorded a consistent 9.8 mpg towing on varied terrain. After living with the new components for a while, we’re now seeing 11.2 mpg after logging about 1,000 miles, with the tuner in the Tow Mode. It’s hard to discern the difference between the Tow and Performance modes, but the increase in power and torque in the Extreme Mode (with the Rapid Flow intake in place) is seat-of-the-pants higher, especially when climbing hills — and confirmed by dyno testing. The exhaust gas temperatures (EGT) are noticeably higher in the Extreme Mode and quickly get to the limit when climbing steep grades, which triggers defueling. We set the parameter to defuel at 1,250 degrees F to be on the safe side (more on defueling later).

To dial in the performance gains more accurately, we took the truck to Lethal Performance in San Antonio, Texas, a shop equipped with a large dynamometer capable of handling a dually truck. Here we checked horsepower and torque with the truck in the stock condition, followed by seven more runs to establish gains as we added the intake and changed the modes on the tuner. Some of the numbers were a bit surprising because without the Bully Dog’s Rapid Flow, the GT Tuner in Extreme Mode actually produced less horsepower than the truck in the stock configuration. This makes a strong case for the Rapid Flow intake because horsepower and torque jumped to the highest levels with the improved airflow. Of course, the Extreme Mode is not really targeted at the towing crowd.

The Bully Dog Gauge GT Tuner allows for an outstanding array of vehicle parameters. Some pyrometer (EGT) settings are specific to either gas or diesel, and not to each vehicle. Nevertheless, the GT Tuner has you covered with pyrometer temperatures, throttle position indicators, mass airflow sensors, injection-control temperatures, battery voltage levels, transmission oil temperatures, manifold absolute temperatures and much more.

Bully Dog thought of just about everything from power levels to automatic defueling in case the exhaust, coolant, transmission fluid and engine oil reach excessive temperatures. The GT Tuner automatically resets to the Stock Mode to avoid damage and a warning signal sounds indicating the tuner has made the setting change. It’s the only tuner on the market with this capability.

Another Bully Dog exclusive feature is called the Driving Coach Wizard. The software collects information from the vehicle sensors set up from the factory. This information is then used to help instruct the driver on the most effective driving techniques to maximize fuel economy whether towing or driving solo around town. The Driving Coach Wizard then gives you a report card grade on how well and efficiently you scored — just like in school. An “A” means you’re an excellent driver and “F” means you fail. There is even an “Epic Fail” notification if the system determines your truck is need of a serious tune up. The system is fun to use and accurately calculates wasted energy and fuel economy.

Bully Dog provides gains in performance and mileage, while giving the driver the capability of changing the power level on the fly. This system creates the power you want and gives you the tools to maximize the towing experience, and can even challenge you to become a better driver.

The GT Gauge Tuner has an MSRP of $699 and that includes free software updates. A Rapid Flow Cold Air Intake kit for the test truck has an MSRP of $369. The RFI Pre-Filter is $32.99 and the RFI Cleaning Kit has a retail price of $16.99. Bully Dog products are sold at Camping World and other performance centers. Tech support is also offered online at www.BullyDog.com or by calling 866-285-5936.