Buffalo on the Prairie 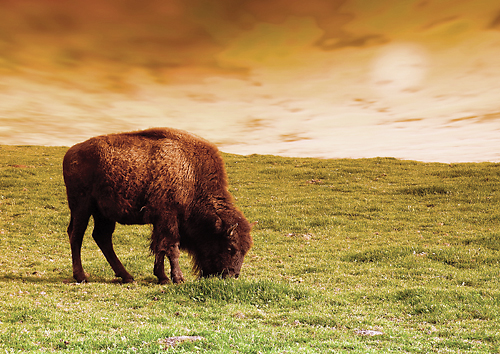 In the middle of Kansas, spread over a couple thousand acres of rolling prairie, is the Maxwell Wildlife Refuge. Its best-known residents are bison and elk. But birds and wildflowers are a couple other reasons that 45,000 people visit here every year.

“They put you right in there with the buffalo,” I was told. “As close as you want to, or ever should get.” It was the bison — or buffalo, if you are a Wild West traditionalist — I had come to see.

The refuge got its start in 1859, when John Maxwell drove a small herd of bison in here and set up a homestead. Later, as he saw civilization coming this way, he dreamed of preserving a piece of prairie and his herd so that future generations could know Kansas as he had. He never lived to do it.

His last surviving son, however, made it happen. Beginning in 1943, the estate of Henry Maxwell purchased 2,250 acres of prairie that were given to the state of Kansas for a wildlife refuge. It created the preserve, as well as a fishing lake and campground to go with it.

Maxwell’s herd ended up in a refuge in Oklahoma. Some were brought back here in 1951. Today the herd averages about 200, making it one of the largest still roaming the nation’s heartland.

At one time, there were 60 to 70 million bison in North America. Early transcontinental trains were often stopped by herds of them. I remember reading about a train that was held up for two days by thousands of unhurried bison that were crossing the track.

Today approximately 250,000 remain in this country, some in refuges, some in private preserves. Yellowstone National Park has the only population of free-roaming bison.

Leaving Interstate 135 at McPherson, I turned north and headed for the preserve. The land around me billowed like a green bedspread in a breeze. This was Kansas, alright.

At the preserve, folks milled around a covered tram with bench seats down the center. It was enclosed by a waist-high railing and was hitched to a pickup.

I parked on the grass under a shade tree. In the tour center, I met Della Meier, our guide. She suggested I tie Rusty, my dog, up where I was parked. “She’ll be fine. Folks here will watch out for her.”

Della’s husband, Owen, gets here a couple hours before the tour, loads a truck with a feed known as range cubes and drives it out to round up the bison. He has to move them over to the trail, and that can take some time.

Della called “All aboard!” and we got underway.

After a few minutes, we could see a group of bison on a hill about a mile ahead. They were just standing, waiting, gathered around Owen’s truck.

When we got near them we stopped. Owen began circling the tram disbursing his load of range cubes. Within minutes we were surrounded by bulls, cows and young calves.

With their noses to the ground, they circled the tram constantly, but paid no attention to us. Wild animals are usually as curious about us as we are about them — out of caution, I suppose. But not these guys. They knew the routine, plus they were “kings of the hill” and they knew that, too.

After about 10 minutes, the cubes were gone and they wandered off.