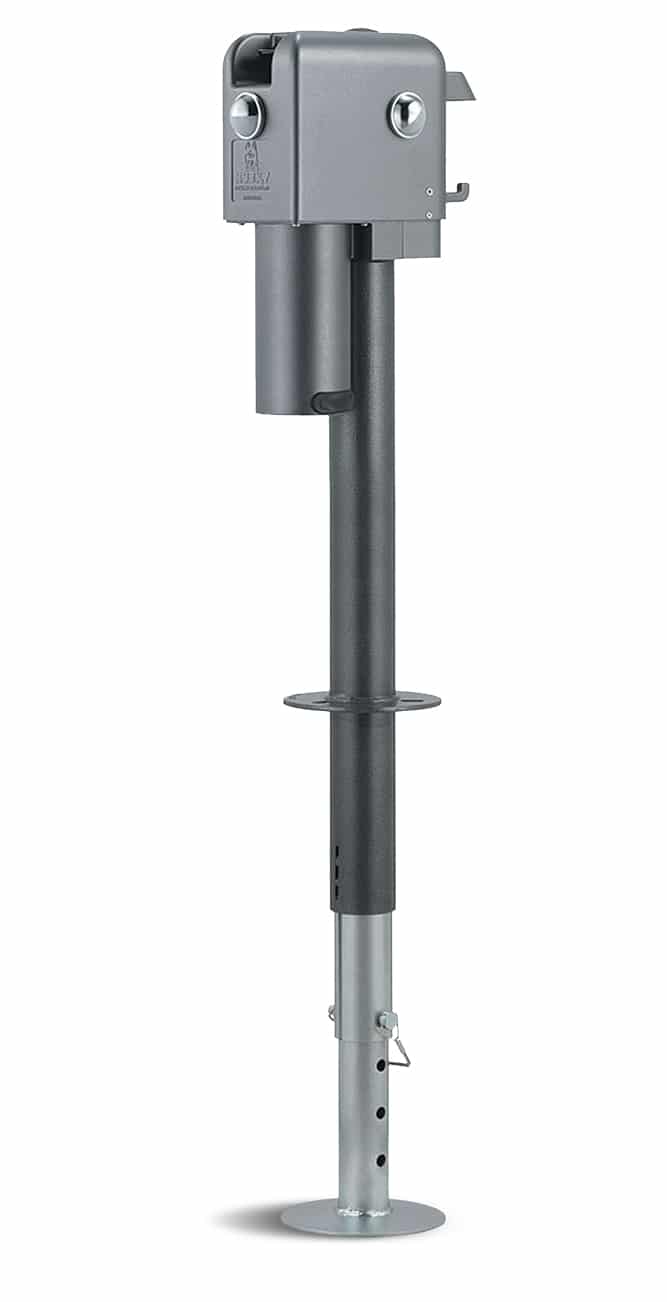 Anyone who tows a trailer knows that setup, breakdown and leveling are not always fun for those who have to crank a manual A-frame jack. A staple of conventional trailers, the basic manual jack is a pretty crude piece of equipment that can require enough effort to bring on a good sweat, even on a not-so-hot day. If you’ve got a toy hauler, the amount of effort is usually greater due to the length of travel required to clear the ball on many models, not to mention the hefty hitch weight.

The Husky Brute electric A-frame jack is designed to lift up to 4,500 pounds, which will handle just about any trailer. Ball bearings reduce friction and amp draw while increasing the projected life of the jack.

Electric A-frame jacks are the solution for those who want to streamline the hitching and unhitching process, but not all are created equal. Husky Towing Products offers a heavy-duty electric jack that takes convenience a step further by including a remote-control key fob. The Husky Brute 4500R is a truly heavy-duty jack (rated to 4,500 pounds) that uses a 2.25-inch steel tube and a ball screw assembly, which allow ball bearings to roll through the shaft’s threads and nut versus the more standard ACME screw that’s used on many other brands. By using ball bearings, the jack benefits from less resistance because it’s subject to rolling friction instead of sliding friction. This allows the jack to draw less amperage while reducing wear, heat and noise — and increasing the projected life of the jack and motor. Take all this and add an awesome remote-control feature, and you’ve got the ultimate A-frame jack.
Having the remote option allows for much simpler and faster hookups. When it comes to leveling, the user no longer has to make multiple trips to the side of the trailer to check on attitude; all one has to do is push buttons until fore and aft positioning are correct. On top of the convenient remote abilities, the Brute 4500R also comes equipped with three LEDs and an industry-exclusive connector storage bracket — at last, a place for the trailer pigtail when in camp or storage.
Installation of the Brute 4500R requires very little mechanical expertise since it’s a direct replacement for the crank-up jack and only a single wire needs to be connected. After chocking the tires and safely supporting the A-frame on jack stands, the three bolts holding the original jack are removed and the assembly is pulled away. The Brute 4500R is bolted up in minutes; nuts are not needed if the coupler structure is threaded. Husky doesn’t include new bolts and flat washers but does provide three star washers necessary for digging into the paint on the mounting plate to ensure a good electrical ground. If, for some reason, the old bolts are in poor condition or just too short, they should be replaced with grade-5 bolts with matching flat washers (and nuts if needed).

The key-fob-style remote for controlling the electric jack shaves a lot of time off the hitching and leveling processes.

From here, the only remaining assembly portion is wiring. Take the included circuit breaker and find a suitable location for it somewhere in or near the battery box, which should be only a short jaunt from the new jack. Next, run the appropriate wire (labeled “load” on the circuit breaker) to the jack’s single 10-gauge lead wire and the other wire from the breaker directly to the positive post on the battery.
The Brute 4500R performed flawlessly, and the adjustable down leg offers an additional 6 inches of travel to the jack’s 18-inch stroke. A SmartStop feature shuts down the power to the motor before the hard stopping point, which reduces stress on the jack. The model with the remote-control key fob sells for around $280.

An adjustable extension adds 6 inches to the 18-inch leg provided by the electric jack.

While standing at a distance to view the side of the trailer, the Brute had no problem responding to the remote control. Finally, no more sore arms from cranking a manual jack and the associated energy expended when hitching and leveling. This is a great upgrade for anyone looking for a high-quality electric A-frame jack, especially for those who hook up or level solo on a regular basis.