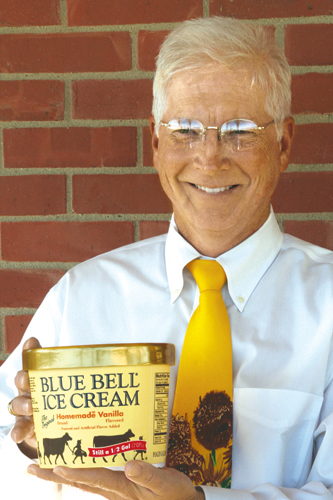 Paul Kruse runs the “little creamery in Brenham.” His father did it before him, and his father before him. It’s an only-in-America story that began 100 years ago in the outback of Texas, 70 miles northwest of Houston.

The farmers here, mostly German, Polish and Czech, raised cotton and corn. They had a few cows to keep their families in fresh milk. But these cows, apparently pleased with their Texas lifestyle, were producing more cream than the farm families could use.

So the farmers decided to churn their excess into butter and sell it — hence the little creamery in Brenham. A few years into the deal, the creamery’s butter maker took it upon himself one day to hand-crank a mixture of cream, sugar and flavoring inside a wooden tub of ice. His tub of ice cream brought raves among the butter makers.

Probably basking in his newfound popularity, he began laboriously cranking out a

couple gallons of ice cream a day. What they didn’t eat at the creamery, they took into town in a horse-drawn buggy. There it was spooned out from the tub, and was always gone before it melted. From that experience, later came a company slogan: “We eat all we can and sell the rest.”

Incidentally, the employee lunch room to this day has a freezer full of help-yourself ice cream.

The farmer-owners quickly learned that “Ice cream is the happiest food in the world,” to quote Paul’s late uncle. In 1911, they decided to invest in the machinery to make ice cream and tag it with a rural Texas logo.

In 1930, they named the company Blue Bell Creameries, after the native Texas wildflowers. It’s now the country’s third-largest ice cream maker with 250 products and a rotating menu of 45 flavors.

It’s available across the South — from the East Coast to Arizona. It’s also on hand at American hangouts in Iraq and Afghanistan. Texas pride being what it is, 62 percent of the ice cream sold in Houston supermarkets is Blue Bell. In Dallas/Fort Worth, it’s 59 percent.

Being number three in ice cream sales in the country says a lot, knowing that the competition sells in 50 states. Blue Bell sells in only 17.

When Paul Kruse was a kid, he hand cut rectangles of vanilla ice cream, laid chocolate wafers on both sides and wrapped the ice cream sandwiches in paper, one at time. Those days are gone. Everything is automated now.

I attended one of the public tours that happen here every day. I watched a machine pack 100 pints of ice cream a minute. Last year, 100,000 visitors made the tour, which ends in the company store and ice cream parlor. I had a hand-dipped bowl of Homemade Vanilla, the recipe for which is the company’s only flavor secret.

Paul told me their biggest seller by far is Homemade Vanilla. “Cookies ’n Cream comes in second,” he said. “We started by buying Oreo cookies at retail from Nabisco. We had to open each package and dump the contents into mixers. That got to be a big project. Nabisco didn’t want to sell them in bulk, so now we bake our own.”

The town of Brenham, population 14,000, dates to 1845 and it shows. Homes built in the last two centuries depict the town’s early prosperity as a center of agriculture.

And it prospers still, as a place in a great country where anything is possible – and where they tell with hometown pride the story of the ice cream first sold here from a horse-drawn buggy.