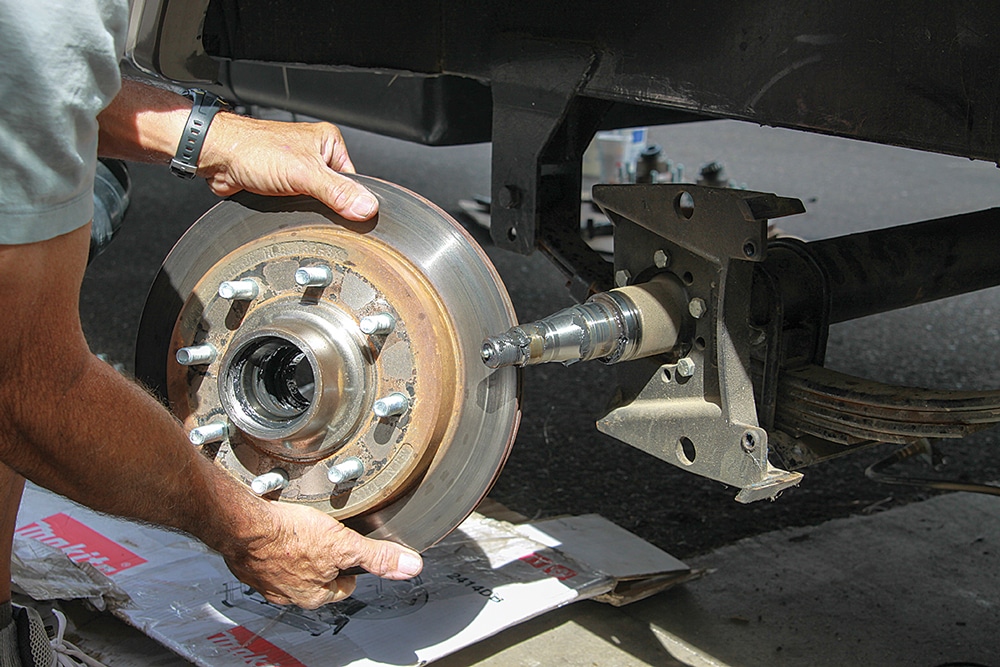 Standard suspensions on trailer and fifth-wheel chassis have looked the same since they first hit the road. Typical configurations enlist leaf springs, shackles and equalizers to tie the axles to the frame. In the last few years, computer technology has helped raise the bar using sophisticated programs that have the capability of simulating the actual movement of components. This allows for detailed “testing” without the need of physically fabricating parts and running trial and error stints on the road. The result has been a number of advanced suspension components that improve ride and handling.

Begin the installation process by removing all parts from the existing trailer axles for reuse on the Trailer Flex Air Ride Suspension System.

Thinking outside the box, two brothers from Canada, Dereck and Paul Legros, have invented an all-new air ride configuration for trailers that could very well set a new standard for trailer suspensions. The Trailer Flex Air Ride Suspension System is not just an add-on to the trailer’s existing suspension; it completely replaces the standard components and delivers an ideal ride height, under any payload, resulting in dramatically improved handling, increased safety and reduced driver fatigue.
A big benefit of an air ride suspension that works properly is the elimination of chucking, the front to rear motion that is commonly associated in part with traditional leaf spring suspensions. The adjustable ride height provided by the Trailer Flex Air Ride allows for a

Remove the axles and leaf springs prior to prepping the spring hangers for the new system.

more balanced attitude based on loading distribution and eliminates the side-to-side motion that often occurs with traditional leaf spring suspensions. Once the driver experiences the improvement realized by the advanced Trailer Flex design, he/she will never look back.
Trailer Flex’s patented Air Ride Suspension kit includes four heavy-duty commercial air bags and four hydraulic shocks designed to bolt on to the trailer’s existing spring hangers. In addition, the air compressor and 5-gallon air storage tank allow the user to control the inflation of the air bags via the automatic leveling valve that mounts conveniently between the trailer’s two axles.

In the event of an air bag failure, the Trailer Flex kit includes individual shut-off valves for each air bag, allowing the operating air bags to remain inflated. These air bags are similar to those used in commercial trucks, incorporating an internal bump stop for each bag that allows the trailer to be towed without air in the bags.
Trailer Flex also designed the air ride system with an air dump valve so that all four air bags can be deflated at once. Users even have the option of dumping the air on one side of the trailer for leveling purposes.
Another feature of the Trailer Flex system is the air storage tank that is automatically filled by the on-board air compressor. This permanently mounted air tank also offers the ability to inflate the tow vehicle and trailer tires with a side-mounted quick-disconnect fitting. All the

The Trailer Flex system utilizes a larger- diameter bolt in the spring hangers, so the existing holes will need to be drilled out.

owner has to do is purchase an air hose and an air chuck to reach the tires.

The Trailer Flex air-leveling valve is adjustable and gives you the option of varying the ride height depending on the trailer’s weight when loaded for a trip. If you have a toy-hauler, for instance, the weight can vary by several thousand pounds from empty to fully loaded.
Painstaking work went into the design of the Trailer Flex suspension. A fact worth noting is that the system was meticulously tested at the Bosch Test Facility in Michigan and has undergone a 1,000-mile durability test that resulted in no issues or problems. A clear report is even more impressive when considering Bosch’s rigorous testing methods.

Start the installation of the Trailer Flex axles by bolting the axle assembly to the front spring hanger.

Prior to installation, the distance from the ground to the bottom edge of a side molding on the outside of the trailer was measured. The new suspension was installed on a 36-foot fifth-wheel that measured 9 inches lower at the rear than at the front when attached to a four-wheel-drive Ford F-350 dually truck. Ideally, the traveling attitude of the fifth-wheel should be as close to level as possible, something the Trailer Flex components were designed to do.

With the trailer on frame jack stands, the tires and wheels, axles and leaf springs were removed. The test trailer had disc brakes, so the calipers were removed and tied up to the frame. For electric brakes, simply mark and cut the wires. Next, all the parts from the axles were transferred to the Trailer Flex assembly.

Install the supplied shock absorbers prior to bolting the rear of the axle assembly to the center spring hanger.

Using two floor jacks, the Trailer Flex assembly was raised into the existing spring hangers and bolted into place. The final steps included mounting the air storage tank, compressor, leveling valve assembly, and all valves and air lines onto the Trailer Flex assembly. Each trailer install will be slightly different, and in this case the compressor on/off switch was mounted near the batteries, the air pressure switch was installed next to the on/off switch and the wiring was routed to the compressor.
After double-checking the installation, an angle iron cross member was welded from one side to the other near the axles. Tires and wheels were reinstalled and the jack stands were removed before lowering the trailer to the ground.

The first step in activating the Trailer Flex Air Ride Suspension System is to turn on the compressor and fill the air bags and storage tank. Keeping a close eye on the ride height, the level control valve is adjusted so the air bags settled with 11/2 inches of clearance above the bottom plate. Make sure to check for air leaks at all fittings prior to preparing to hitching up for a test ride. A test drive should be performed before making final ride height adjustments.
To begin the test drive, we pulled out of the driveway at Transwest Truck, Trailer, RV of Frederick, Colorado, choosing an off-camber departure in a deliberate effort to create some serious rocking motion in the trailer. It was clear that the Trailer Flex Air Ride was doing its job because we could barely feel any disturbance inside the cab of the truck. Out on Interstate 25, the bridge

The heavy-duty Firestone Air Bags are the exact same as used on major transport trucks and are the heart of the Trailer Flex Air Ride Suspension System.

abutments are harsh and can really take a toll on a trailer’s leaf spring suspension as well the driver’s overall comfort. What normally produced a violent chucking motion was reduced to a fraction of the intensity. In addition, the side-to-side movement of the trailer from uneven pavement was virtually eliminated, creating a much more pleasurable driving experience. The increased stability prevented the axles from hopping during hard braking, decreasing the distance required to bring the fifth-wheel to a complete stop.
With the road test completed, we pulled back into the Transwest facility to make the final adjustments to the level control valve. From a visual standpoint, it was obvious that the fifth-wheel was sitting on the truck at a near level attitude. A final measurement confirmed that the trailer was only 1 inch lower in the rear than the front — a great improvement from where we started.
The Trailer Flex Air Ride Suspension System is top-of-the-line and assembled with high quality parts; the suspension is maintenance free. The single axle kit is $1,500; the tandem kit is $2,900. Owners have the option of using the stock axles or ordering new axles with the kit. For the fifth-wheel tested, the 7,000-pound tandem axle kit retails for $3,700. Prices for the kit will vary depending on the size of the axles. The installation time should run around five to six hours.

railer Flex uses a high-quality air compressor made by Viair and a 5-gallon air storage tank that can also be used to fill truck and trailer tires.

All kits are protected by a limited three-year warranty. The Trailer Flex can be shipped anywhere and can be installed by any qualified mechanic or technician. All parts, hardware and detailed instructions are included to complete the installation.
Trailer Flex’s air suspension is a far cry from riding on leaf springs. The improvement in ride comfort, handling and safety is light years ahead of the standard setup and your trailer will thank you for smoothing out the bumps.

With the installation complete, double-check all air connections and bolts prior to reinstallation of the tires and wheels.