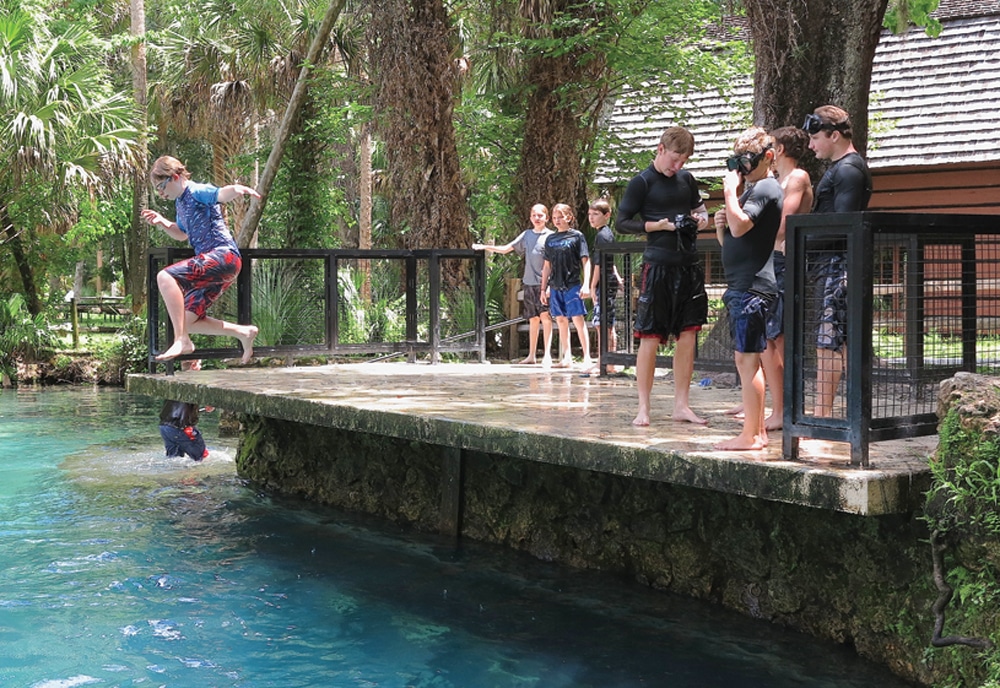 While piercing cries echoed from the surrounding swamp like a flashback from some black-and-white Tarzan movie, I dipped my paddle into the still, tea-colored waters of Alexander Springs Creek. Though the wild waterway my family and I are canoeing is only about one hour from Florida’s world-famous beaches and amusement parks, it feels like we’ve been transported to another world.

As we mark the twentieth anniversary of the National Scenic Byways program with our Scenic Route series, I’ll be the first to admit that my mental images of the Sunshine State run to waves breaking on white sand and smiling kids in Mouseketeer beanies. What I discovered in exploring the Black Bear Scenic Byway, however, was something completely different. Namely, I found a place where the phrase “Florida wilderness” is not the oxymoron I once imagined.

Access to this little-known corner of Florida comes by the way of the 123-mile Black Bear Scenic Byway, which crosses the lonely pine scrub forests and hardwood swamps of the Ocala National Forest. The two main roads that make up the Byway, State Routes 40 and 19, bisect this landscape east to west and north to south respectively. Small side roads offer access to secluded springs, old-time river ferries and other hidden treasures along the way.

Before you visit, though, keep in mind that unlike other Scenic Byways offering spectacular views around every turn, the Black Bear can’t be fully appreciated from the driver’s seat. Dig a little deeper, however, and you’ll discover a wild side of Florida that feels a lot more authentic than the state’s high-profile tourist destinations.

As we set out to explore the Byway, we decided to jump right into the deep end of the pool by visiting the natural springs that are the area’s single largest and most unique attraction.

Born of the state’s karst (dissolving layers) geology, the springs are the result of underground rivers that bubble to the surface forming blue old-fashioned swimming holes. In addition to the millions of gallons of crystal-clear water gushing forth at a refreshing 72 degrees year-round, the four main springs also make it possible to access the wilderness that lies beyond via canoe rentals and trails.

After casually splashing around in the more built-up pools at Juniper Springs, Silver Glen Springs and Salt Springs — each of which has its own distinctive charm — we headed south toward the most natural-looking of the Byway’s major springs at Alexander Springs State Recreation Area. Just outside the roped-off swimming area we launched our rented canoe to paddle part of Alexander Creek, a slow-moving 10-mile stretch of water that leads from the springs through a wilderness area of hardwood swamp to the St. Johns River, one of the few rivers on the continent that flows northward.

Visitors to the area enjoy swimming, boating and kayaking.

Along the way we spotted a wide array of wildlife from large turtles basking on logs to noisy long-beaked limpkins — the source of those Tarzan-esque sound effects — wading among the hyacinths in search of an afternoon snack. While we also saw several small- to medium-sized alligators, we thankfully missed the 12-footer we were told liked to hang out near a bridge downstream. Unfortunately, we also struck out on seeing the black bear mother and cub we were told had been around here just days before.

While this area remains one of the wildest places in Florida, it’s relatively tame compared to the landscape that greeted early settlers here. To get a better idea of what those days were like for the hardy individuals, we stopped at Barberville’s Pioneer Settlement for the Creative Arts.

This expansive open-air museum includes a broad collection of buildings and artifacts recreating the lifestyles of the men and women who settled here in the late 1800s. Highlights of this pioneer village include a relocated railroad depot, general store and church, as well as a rustic 1875 cabin.

For a look at the remains of one of these homesteads, we headed to the Yearling Trail located opposite the entrance to Silver Glen Springs.

When Teddy Roosevelt turned 600-plus square miles of sand pine scrub forest and hardwood swamp into the Ocala National Forest — the first national forest east of the Mississippi — this area was widely regarded as “the land that nobody wanted.” To try and understand that puzzling attitude, we headed to the small town of Astor for a two-hour river eco-cruise with St. Johns River Tours (866-349-0674).

Horseback rides are a great way to explore deep into Florida’s wilderness along the Byway.

While it may not be great for farming, this watery landscape produces a bumper crop of natural wonders. Motoring slowly along the St. Johns, Florida’s longest river, and its tributaries, our captain pointed out alligators sunning themselves on the bank, supersized wildflowers and a host of birds including great blue herons, anhingas, ibis and even an osprey with a fresh-caught fish wriggling in its talons. In 1765, English naturalist William Bartram described this area as “a true garden of Eden.”

This part of northern Florida is also home to countless horse farms, so we decided to leave the pavement behind and explore a little farther into the wild on horseback with the help of the folks from Fiddler’s Green Ranch in Altoona (800-947-2624).

Our guide saddled up three gentle mounts and led us out past other ranches and into low rolling hills covered in scrub pine. Along the narrow trails we passed ponds, another old cemetery and expanses of spikey palmetto that stretched as far as the eye could see.

Of course, our trail ride was memorable as much for what we didn’t see. Our guide told us she frequently encounters black bears on these tours but, in what was becoming an all-too familiar experience, we were shut out yet again.

One of the more impressive inhabitants of Silver Springs Nature Park.

By far the most touristy attraction along the byway, Silver Springs Nature Theme Park (352-236-2121), encompasses one of the world’s largest freshwater springs. While the theme park may seem to be a relatively modern invention, this 350-acre operation has been drawing visitors to this obscure corner of central Florida for more than a century.

The glass bottom boat tours that were pioneered here in 1878 are still going strong. Though they can’t compare with the view you’ll get snorkeling in one of the area’s other major springs, the boats are a good way for those that prefer not to get their feet wet to get a glimpse of the abundant underwater life that flourishes.

The real attraction, however, is the park’s wild animal collection. The menagerie includes a number of local critters you would be hard-pressed to see in the wild including the endangered Florida panther, rare white alligators and, yes, even black bears. If the truth be told, seeing the Byway’s namesake here felt a little like cheating.

Our exploration of Black Bear Scenic Byway revealed Florida’s forgotten wild side. While the Byway makes this backcountry easily accessible, it’s not laid out in plain sight as is the case with many other Scenic Byways.

In other words, it takes a little effort to discover this Florida wilderness. Which, I can tell you from personal experience, is at least half the fun.

The Black Bear Scenic Byway is located in central Florida, about an hour north of Orlando. Getting there is simple, with the easiest access from the west or east at the point State Route 40 meets Interstate 75 in Ocala or Interstate 95 in Ormond Beach.

While you’re never very far from civilization, you’ll want to top off your fuel tanks and stock up on lunch fixings before you set out to explore the Byway as gas stations, stores and eateries are scarce here. Also remember this Byway can’t be fully appreciated sitting in the seat, so plan on stopping often and exploring on foot at any of state parks and trailheads you’ll encounter.

Finally, bear in mind that many of the parking areas at the springs and trailheads aren’t designed to accommodate RVs, making it wise to drop your trailer at one of the many RV parks or campgrounds in the region before you set out to explore. Here are two that I can recommend based on our visit: