When more snow comes down on a mountain in the winter

than melts in the summer, pretty soon you’ve got yourself a glacier. Nobody knows how many glaciers there are in Alaska — counting them would be a career — but the consensus is that there are 100,000 here. They are as old as the land itself and moving all the time.

As this snow piles up, its weight compresses it, turning it to ice. It can weigh up to 55 pounds per cubic foot. Under this immense weight, and coerced by gravity, glaciers flow from the mountains, scrapping, grinding and consuming the landscape as they go. A surviving rock rolling out at the toe or terminus of a glacier may have been traveling for hundreds of years, on a journey of less than 50 miles.

They are master carvers, leaving behind rugged topography and deep, U-shaped valleys where they recede. They are the source of most rivers here, the reason why Alaska’s rivers are usually brown: Melting glaciers release tons of dirt and what’s called rock flour — the result of rocks being crushed and ground into a fine grain.

At lower elevations, a glacier may lose its top layer of white during the long days of summer. What’s laid bare appears as piles of gravel that have been swept up into sharp peaks. It’s actually a jagged ice pack topped with a layer of crushed rock.

I’m deep in the Wrangell-St. Elias National Park and Preserve at a place called Kennicott. Perched on a ledge between a glacier and a mountain, it was once a mining town that boomed for 27 years in the early 1900s. The multilevel structures that a century ago produced electric power and processed copper ore are now National Historic Landmarks that are being restored by the Park Service.

That glacier, which is close enough to be the next street over, if Kennicott had two streets, is displaying its summer coat of gray rock. A trail at the edge of town goes for a couple miles to an access path leading to the Root Glacier, which is white ice. I made the hike with some new friends and a guide.

With cleats, called crampons, strapped to our shoes, we 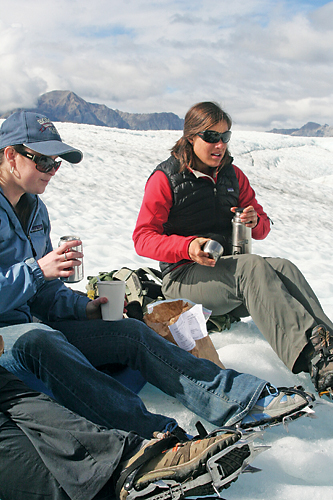 climbed up on the ice. It’s not smooth ice, like a skating rink;  it’s more like slush that’s frozen solid. We had brought bag lunches. After some exploring, we sat on mats of foam rubber spread on the glacier and ate lunch.

Wrapped with my sandwich were slices of tomato. How ironic is that? I’m in desolate Alaska, sitting on a glacier that was formed during the Ice Age, and I am eating fresh tomato.
And how desolate is this place?

This is not a park like Yellowstone that you can drive in, have lunch and drive out again. Just in size, Wrangell-St. Elias equals six Yellowstones. It’s more than 13 million acres.

There is only one road in here, and it’s 59 miles of gravel. Few people even attempt the drive, as most of them just come to see the mountains — nine of the highest peaks in the United States — and they are clearly visible from the highway. 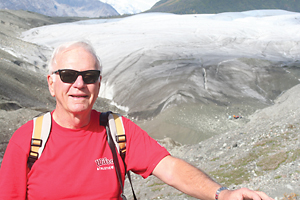 The Park Service says the drive in here takes more than three hours. In their literature, they call the drive an “adventure.” Then they list the hazards, the first being: “sharp rocks resulting in flat tires.”

But there is some bus service. And a great thing about Alaska, it’s full of air charter companies flying to remote areas like Kennicott. I’m told they even land on glaciers in the winter.