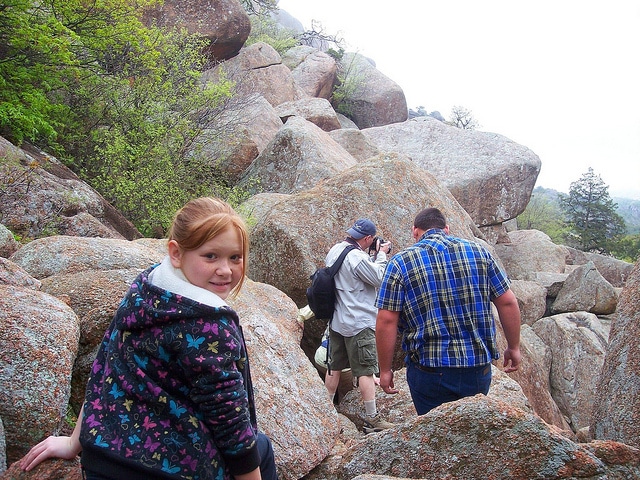 Why see Labor Day as a season ender? One of the year’s best hiking times is about to begin. For a treat this fall, explore some standout trails on national wildlife refuges. Refuge trails can be just as scenic as national park or national forest trails, but tend to be less well-known. All the better for wildlife viewing.

So says Mike Mullaley, who in 2011 helped survey more than 1,500 miles of trails at 234 national wildlife refuges with his Student Conservation Association team. “Many of these places are off the beaten path,” he says. “With fewer people on site, there is a great chance to experience nature.”

Here are some outstanding hiking trails of varying length, difficulty and terrain on wildlife refuges nationwide. (For other trails in the National Wildlife Refuge System, visit http://go.usa.gov/w9O.)

Enjoy a hike to what Mullaley calls “one of the finest beaches I have seen in this country.” The popular trail begins in a coastal forest and passes a saltwater lagoon on one side and a freshwater lake on the other. It proceeds south through small, rolling dunes to a great vista of the Gulf of Mexico. Says Mullaley, “You can hike right into the water and cool off!”  Respect signs asking you to stay on the trail and avoid disrupting the fragile dune ecosystem.

Gain quick access to mountains in the Mystery Creek unit of the Kenai Wilderness. This heart-pumping trail begins in forest and emerges above tree line in about three-quarters of a mile; one half-mile further, the trail gradually disappears in an alpine area. Above timberline, see spectacular views of the Kenai Mountains, the Kenai Peninsula lowlands and Cook Inlet. Mt. McKinley (Denali) is visible to the north on clear days. Steep, rocky hikes to the tops of several nearby peaks are possible.

The trail leads through a swamp to a bench overlooking a small stream and a mammoth cypress tree (43 feet around, 120 feet tall) ─ the largest in the state of Arkansas. Writes Mullaley, “Elsewhere in the South, you can find cypress ‘knees’ (vertical root protrusions) that reach one to two feet above the ground or water. The knees of the Champion Cypress Tree must be somewhere between seven and ten feet tall. It is a wonderful spectacle.”

This figure-eight trail ─ popular with pedestrians, cyclists and dog-walkers ─ passes through several types of habitat and offers great views of the bay. The trail goes over the Newark Slough, a tidally influenced natural channel that allows saltwater to penetrate inland. It also passes a salt pond. In winter, look for lots of migratory shorebirds and waterfowl. The Tidelands Trail was designated a National Recreation Trail in 1981.

This piece of the 1,400-mile Florida National Scenic Trail offers primitive hiking through Gulf coastal pine, dense stands of leafy trees and a saltmarsh wilderness. The refuge trail crosses marshy areas via boardwalks and bridges. About 15 miles of trail follow refuge roads that are closed to vehicles. You’ll need a boat (ask locally) to cross the St. Marks River. Campers: Get an overnight use permit from the refuge web site. SCA interns Mullaley and Alex Aaker say their 15-mile hike on the trail in late April “allowed us to see a vast extent of Florida’s wildlife, wilderness and coastline.” Fall hikers may see migrating monarchs. Packing note: Bring bug spray. Writes Mullaley, “It was my first experience with ticks (15 total in both ankles!), but it does not hinder the excitement of the trail.”

This trail provides the best wildlife viewing and photography access at the refuge. Visitors hike along the perimeter of refuge ponds to view one of the largest concentrations of endangered water birds, migratory waterfowl and shorebirds in Hawaii. The trail is set away from two nearby highways, providing for an usually quiet opportunity to appreciate the natural environment. Another easy refuge trail worth investigating: the Kealia Coastal Boardwalk.

One of several scenic trails at this refuge in the panhandle of northern Idaho, Old Humpback Trail winds its way up steeply through conifer forest. Short spur loops offer picturesque overlooks of the Selkirk and Purcell Mountain Ranges. Selkirk Mountain is important grizzly habitat. For a bonus, add in the quarter-mile Myrtle Creek Falls Trail, leading to an overlook of a falls with a drop of more than 100 feet.

Find escape just steps from the city. This trail offers surprising solitude for a place within two miles of the Minneapolis/St. Paul airport. The hilly trail skirts the base of the bluffs along the Minnesota River, weaving in and out of forest and ending near a historic bridge closed to traffic. A trail spur leads to an observation overlook that juts out into a river-fed marsh. In case of recent heavy rains, check with refuge staff on trail conditions before you go. Sometimes flooding closes the trail.

This scenic trail began as an access trail to the Bitterroot River, a world-class trout fishery, for local farmers. It was designated a National Recreation Trail in 2005 by Secretary of the Interior Gale Norton.  It offers spectacular views of the Bitterroot Mountains and excellent birdwatching; some 80 percent of Montana’s breeding birds use this habitat for nesting, and the refuge forms the core for the Bitterroot River Important Bird Area. The trail ─ originally part of Stevensville, the first European settlement in Montana ─ leads through a fragrant forest of ponderosa pine and black cottonwood. The first half-mile of the trail is paved and wheelchair-accessible. The refuge is also along two National Historic Trails ­– the Lewis and Clark Trail and the Nez Perce Trail – and the Glacial Lake Missoula National Geologic Trail.

One of the oldest trails in the region, dating back to 1923, the Wapack Trail heads south from the refuge’s northern boundary to the peak of North Pack Monadnock. This small mountain offers great views of the surrounding area and higher Mount Monadnock to the west. SCA interns Stefano Potter and Toji Sakamoto, who surveyed the trail in 2011, called the refuge “one of the most spectacular of our trips…Wapack Refuge had spectacular trails that went precipitously up a mountain whose summit held rocky outcroppings and stunning vistas.” From North Pack Monadnock, the trail continues south into northern Massachusetts.

As a bonus, refuge manager Graham Taylor recommends adding the 1.1-mile Cliff Trail, a spur off the Wapack Trail. “It’s a talus slope with granite outcroppings and spectacular views of Miller State Park, to the south,” says Taylor. “The trail will be a great spot to watch hawks and eagles migrating down the ridge in the fall.”

This trail through a Southwest wilderness area winds through the Chihuahuan Desert up a steep volcanic canyon.  The first 1.5 miles climb gently to a bench with a great view of the refuge. After that, the trail steepens, gaining more than 1,700 feet of elevation from the valley floor to the peak.  The reward at top is a 360-degree panorama of the refuge and the Rio Grande, surrounding mesas and the majestic Magdalena and San Mateo Mountains to the west. The trail was designated a National Recreation Trail in 2008 by Secretary of the Interior Dirk Kepthorne. It’s best used in the fall, winter and spring, when temperatures are below 100 degrees. Watch out for rattlesnakes in the late spring and early fall. Take plenty of water and wear adequate footwear.

“I always imagined western Oklahoma’s terrain was flat,” says Mullaley. “I was definitely wrong.” This hike in the Charon’s Garden Wilderness Area, he says, “climbs into the heart of the mountains. There, a boulder field tests your sense of direction, adventure, and quality of shoe! The hike to the boulder field is well marked; the walk through it, not so much. After traversing some narrow gaps and rocky terrain, you come round the mountain to find small streams and waterfalls and stunning mountain views.”

Randy Hale, refuge environmental education specialist, calls the hike “probably the jewel of the Wichitas. There are places where you wonder, ‘How am I going to get from here to there?’ It’s really rugged.” Note: Bring plenty of water. If the lot is full at the Sunset Picnic Area, at the base of Elk Mountain, park instead at Treasure Lake and hike south to north. Roadside parking is not allowed.

Pick from an easy network of trails on a coastal island closed to vehicle traffic.  The island’s salt marsh and upland habitats teem with birds and other wildlife. One route popular with even hiking novices follows a gravel maintenance road (about one mile each way) to Ibis Pond. Narrower dirt trails lead off into areas of live oaks, slash pine and cedar.

For saltwater hike lovers, here’s a gem: a scenic hike in the Strait of Juan de Fuca, along the longest coastal spit in the continental United States. The refuge trail leads half a mile through forest to an overlook before it drops to the beach at the foot of tall bluffs. Continue on toward the spit’s end, where a lighthouse has kept guard since 1857. The inside and tip of the spit are closed to the public to protect wildlife habitat. Volunteer keepers offer daily tours of the New Dungeness Light Station.

This open trail on a low sandstone ridge near the Dolly Sods Wilderness offers solitude and excellent wildlife viewing. It goes through forests, grasslands, streams and wetlands, and past a massive complex of beaver lodges. The trail provides views of surrounding mountainsides that rise nearly 800 feet above the valley floor. Stream crossings along Sand Run and Glade Run may require wading, and beaver damming can sometimes flood trail segments. Wear blaze orange during deer-hunting season, Sept. 1 to Feb. 28, and during spring turkey-hunting season, usually in April and May. The trail is also used by horseback riders and cyclists.